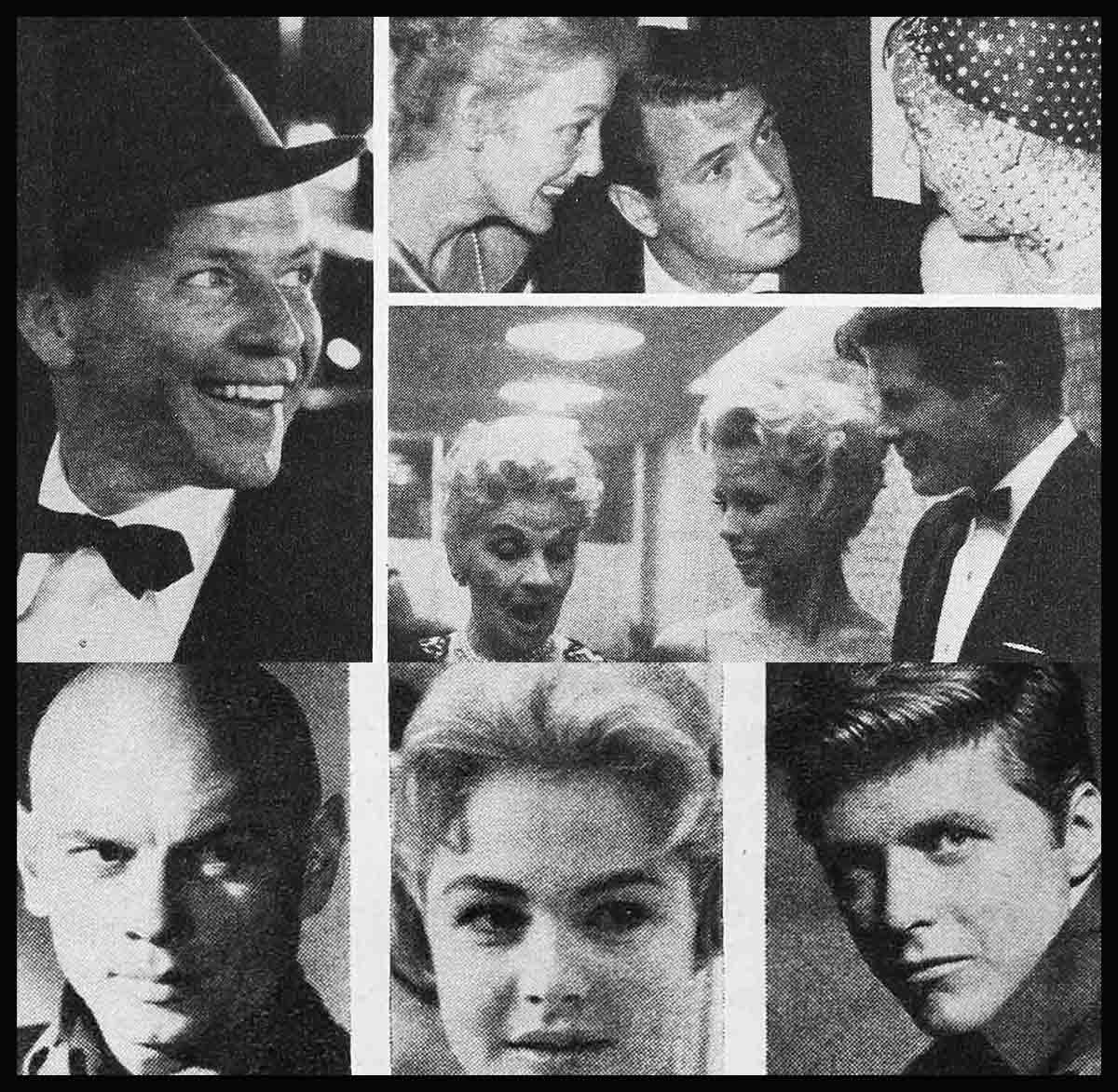 Sing of Summer: It’s the latest, the newest, the livingest end! The younger crowd at all the beaches are wearing white lipstick with nail polish to match. And the effect against those dark-tanned faces is so startling that one Malibuite vows that creatures from Mars have landed in his midst. . . . Frank Sinatra’s once-in-a-while date, starlet Sandra Giles, ripped off the fur that completely covered her car, replacing it with sequins. Cooler, you know. . . Sal Mineo, who’s been squiring Jill Corey around town, spends every spare moment at the beach with “older” girls, those in the 21 to 23 category. Its my guess that Sal’s dating more “mature” girls to impress his producer that he’s old enough to take a wife in “The Gene Krupa Story.” Once the movie’s finished, Sal will come back to his real teenage loves. Just wait and see. . . . Frankie Avalon took his first movie location-jaunt when the Alan Ladd picture, “Guns of the Timberland,” moved to a small Nevada town for outdoor scenes. Raring to go, Frankie hardly listened to Mom as she filled his bag. “I’m putting a small package in your suitcase.” his mom announced between warnings to dress warmly and take care of himself. “So that night as I’m unpacking my clothes, I find the package,” Frankie told me later. “And guess what was in it? An Italian sausage, a huge salami and a knife! I guess Mom was afraid the company wouldn’t give me enough to eat.” Incidentally, Frankie tells me he gets to kiss teenage Alana Ladd in the movie and is quite happy about it all. And—just in case you haven’t already guessed—so is Alana.

Lunch at Warner Brothers: “I thought I saw you come in,” Edd “Kookie” Byrnes said, drawing up a chair to our table in the Warner Brothers dining room. Edd, who had been lunching with his “77 Sunset Strip” pal, Efrem Zimbalist, and the lovely Kathleen Crowley, was all done up in western garb for his movie “Yellowstone Kelly.” “Come out to the set and see me,” he urged. I accepted the invitation—who could refuse one from Kookie?—but first I wanted to know the latest news about his romances and heart interests. “I haven’t time to pitch a grain of woo.” he sighed. . . . Efrem then pulled his chair over to my table to tell me how thrilled he is over his new house in the Valley. “The minute Stephanie saw the stables, the house just had to be ours,” he confided. “She’s a great horsewoman. Pretty Joanna Moore, busy on a TV sequence for “Bourbon Street Beat,” joined us for a chat when suddenly, whamie, a publicist upset coffee all over her studio frock. Bedlam followed, with “Kookie” Byrnes running for water, Efrem grabbing up a napkin and all of us rubbing. Sighed Joanna, “I’ll keep my back to the camera.” From across the room called. “Sara, see you on the ‘Cash McCall’ set.” And out of the corner of my James Garner eye, I noticed the kindness of Barbara Rush, her hair in pin curls. gathering up a solitary luncher, Jacques Bergerac, and taking him to her crowded table. Brides like to make everybody happy, I thought.

Bus Stop! If you were one of the lucky ones who met that bus load of Warners’ cross-countrying “Young Philadelphians,” you’ll get a kick out of their take-off troubles. To begin with, Peter Brown and Diane Jergens,who were late with their packing, held up the bus while the kids outside hooted and honked. At the next stop—to pick up Connie Stevens, Diane was suddenly struck with an awful thought. “Go back, go back,” she cried, “I forgot to pack my fluffy petticoats.” Peter had to promise to replace them. Then Ty Hardin accidentally sat on a box containing the birthday cake Will Hutchins’ mother had baked for the trip, squashing it flat. Next, Victoria Shaw missed her connections from a location jaunt and husband Roger Smith had to go on without a word of farewell. P.S.: All of these bad starts still turned into a good trip.

Inside Notes: “Sara!” The voice on the telephone was breathless. “We’re going to be married in August.” I wished Margaret O’Brien all the happiness, and, to myself, I also wished that Margaret changes her mind about giving up her career when she becomes Mrs. Robert Allen. . . . Hollywood almost lost Rock Hudson for a spell. At least Rock was working hard to lower his singing voice and, if he’d made it, he’d have accepted director Martin De Costa’s offer to star in the musical version of “Saratoga Trunk” on Broadway. Then U-I said no, so Rock’s staying home in Hollywood where we all love and understand him. . . . Even if a reconciliation with Glenn Ford comes about, I have a feeling Eleanor Powell will still go back to her dancing career and maintain her independence. After all, enough is enough. . . . John Wayne is determined his son, Pat, will make few mistakes in his movie career. He passes on all Pat’s scripts! Pat doesn’t mind. . . . Maybe I shouldn’t reveal this, but some varmint sneaked into Hugh O’Brian’s house and made off with his guns. “Can you imagine stealing Wyatt Earp’s guns?” Hugh And Gary Cooper is keeping mum about it, but the truth is Gary’s been plain seasick all through the shooting of “The Wreck of the Mary Deare.” One look at that old craft swingin’ and swayin’ on the waters of M-G-M’s back lot and I was calling for the seasick pills myself.

Party News: “Save Wednesday night.” Rock Hudson’s telegram read, “I’m having a party at Romanoffs.” Rock and Jean Simmons were celebrating after the preview of their movie, “This Earth Is Mine,” and the turnout was starry bright. Handsome Cary Grant came by himself, but lovely Lana Turner, looking very happy, brought her steady beau, Fred May. Rock escorted Jean, whose husband Stewart Granger was absent, and with Louis Jourdan and his wife they made about as handsome a foursome as the world can produce. Robert Horton and blonde Cindy Robbins, who scored in the movie with Rock, sat at our table. “Bob, your hair is red!” I said in surprise. Bob roared. “I get the same reaction from everyone,” he laughed. “For some reason no one thinks of me as a redhead.” A note came over from Lana Turner to me. “Please bring that fine young actress over to my table,” it read. “I want to congratulate her.” Cindy was flabbergasted. “It’ll always be the highlight in my career,” she confided. . . . With hand outstretched, Frank Sinatra came over to our table at the Grammy Awards, a few nights later, aglow with enthusiasm. “This is the very first Award meeting of the Recording Arts and Sciences,” he said, “and look at the turnout.” Many of us felt Frank should have won more than one Grammy—and that one just for an album cover—for after all his records and albums sell like crazy. As Milton Berle announced, it took the Chipmunks to beat him. In fact, “The Chipmunk Song” grabbed off three Awards, one for each of them. And Perry Como, Ella Fitzgerald and composer Henry Mancini also won well-deserved Grammys—a tiny gold miniature grammaphone replete with horn and winding crank.

It Started With a Kiss: All of a sudden Brandon de Wilde, 17, and Carol Lynley 16, knew they were in love. “It happened on the set of ‘Blue Denim,” Brandon told me. “I’d been steady-dating Bonnie Trompeter, a model, back in New York, and I never thought of anyone else. Then in one scene for ‘Denim’ I had to kiss Carol and, well, it happened. I suddenly knew I was in love with Carol.” . . . “And how does Carol feel about it?” I asked. “The same,” he said, with charming frankness. “We both knew it the minute we kissed. So far we’ve had over thirty dates and we still feel the same. Of course, I’ve got to tell Bonnie,” he said, looking around rather bewildered. “It wouldn’t be right not to.”

TV Jottings: Prepare yourself for Roger Moore. Done up in parka and fur-lined boots, I met him toiling away on Warners’ Stage 12 on the first of “The Alaskan” series. You probably remember Roger opposite Carroll Baker in “The Miracle.” If I read my own sighs right, he should be the new dreamboat of the airways. . . . Equally handsome, but in a darkly brooding way, is Van Williams of the new “Bourbon Street Beat” series. Van has Richard Long and Arleen Howell to keep him company. And Clint Walker, on his “Yellowstone Kelly” set, told me how happy he is to be making only 13 “Cheyenne” episodes next season, with Ty Hardin, in his new “Bronco” series, alternating each week with Will Hutchins’ “Sugarfoot.” Incidentally, Clint is mighty happy to have Edd Byrnes in his “Yellowstone” movie, as well as Ty Hardin’s wife, Andra Martin, who’s expecting a baby in the fall. “The first in our own series,” Andra told me. . . . Twentieth, of course, is in a complete dither over their handsome new giant, Gardner McKay, who steps from “The Best of Everything” movie into the “Adventure in Paradise” series. And no wonder they’re excited. The day I lunched at Twentieth, every feminine eye in the dining room followed McKay to his table. And some kept right on looking. . . . Phyllis Kirk—Mrs. Thin Man—who was so set up by her Emmy nomination, was a bit let down when her romance with the caustic-tongued comic, Mort Sahl, blew a fuse. The romance got turned on again soon after. but with these two you never know what will happen next. . . . Fred Astaire, still aglow over those 9 Emmys for his one TV appearance. “An Evening with Fred Astaire,” is already mapping out another such TV evening. With Barrie Chase, of course.

When Sandra Dee isn’t spending her holiday hours at the beach. she’s home playing records. Her favorite, at the moment, is Edd Byrnes’ fast-selling “Kookie, Lend Me Your Comb.” . . . George Hamilton, the handsome young star of “Home From The Hills,” drives a very old Rolls Royce that once belonged to the Royal Family of England. George, who has dated Cheryl Crane a few times, finds her a charming teenager, sometimes quite grown up and other times very young and sweet in the things she says and the way she thinks. . . . It isn’t true that Lassie was present at the wedding of June Lockhart to architect John Lindsey but June’s two small daughters by a former marriage were there. Little Jon Provost of the Lassie series sent flowers to “My TV mother.” . . . Yul Brynner, having hair problems in Paris, telephoned Hollywood for a new hairpiece. Since Fabian signed that Twentieth contract, every young starlet in town is nagging her agent for a job, any job, at the same studio. The handsome young crooner would be surprised if he ever discovered the gals’ plans for him. . . . And if half the things they say about fifteen-year-old Tuesday Weld are true—like Danny Kaye’s remark that “Tuesday is 15 going on 27”—my goodness, it seems our teenagers are already becoming “old timers”! . . . As if it wasn’t enough to be thrown from a horse and almost break her back, Audrey Hepburn has now lost her baby, and all Hollywood hopes the future will be brighter for Mr. and Mrs. Mel Ferrer. . . . Glad to reassure you that Doris Day’s illness is not as serious as reported in the papers. They said* mononucleosis, but it’s nothing worse than a virus. . . . Sophia Loren cried an outraged “absurd!” over rumors she’d divorce husband Carlo Ponti to get back to Italy. “Everything’ll be fine,” she added. We’ll see next month.

It is a quote. PHOTOPLAY MAGAZINE AUGUST 1959