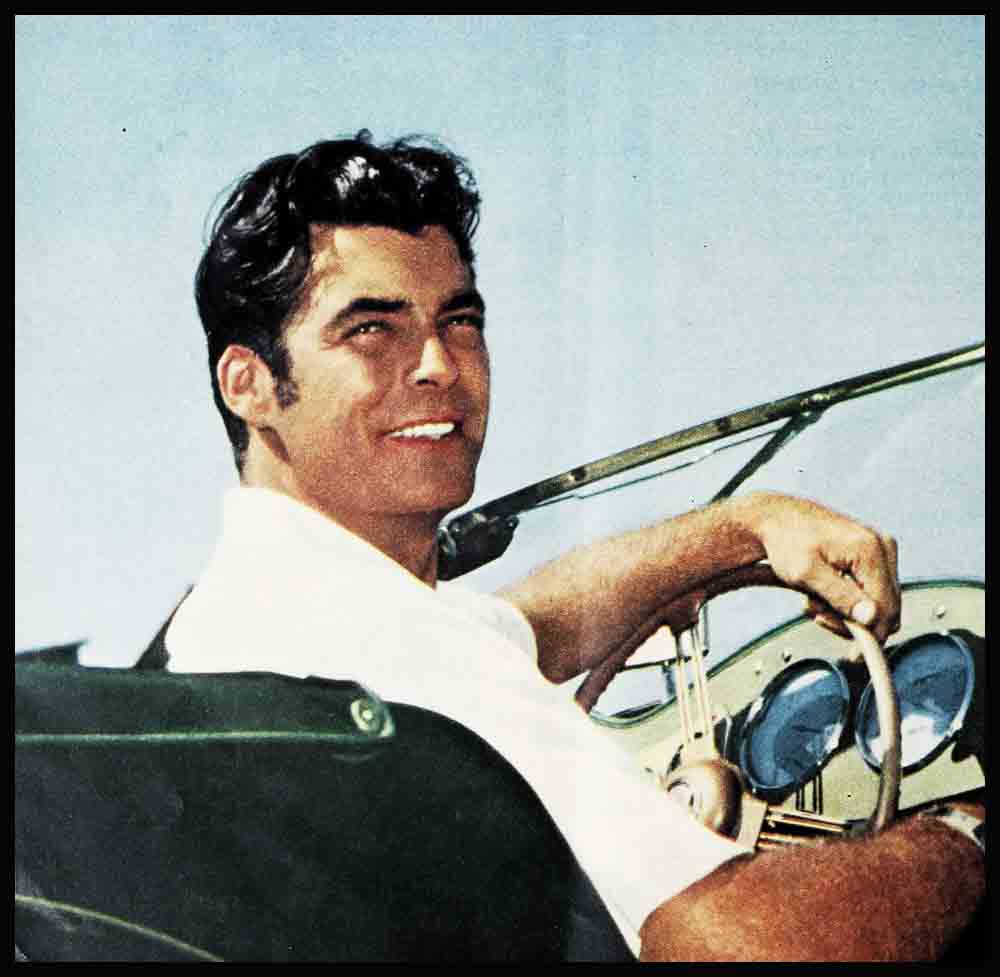 Take an outdoor guy and plunk him down in the middle of Hollywood glamour life. The result is an unhappy guy. That’s what you’d naturally expect. But take a real f’rinstance: outdoor guy Rory Calhoun plunked down in Hollywood picture-making, and a more contented fellow you’ve never seen. And why? Chief reason: Rory’s wife, Lita Baron Calhoun.

“Maybe we’re naive about it, but we can’t get away from the fact that we’re more in love now than when we got married,” Lita says. “We don’t think people get married to get away from each other. We don’t take separate vacations. Except for Rory’s occasional hunting or fishing trips, we are always together.”

Lita makes it sound very simple, but anyone who knew the rugged, six-foot-three Calhoun at the time of his marriage to the little dancer, Lita Baron, would have bet he’d remain a holdout from life in Hollywood. Even Rory thought so, and as recently as two years ago he was planning to live on his Ojai ranch and come to Hollywood only for the necessary weeks when he’d be before the cameras at Twentieth Century-Fox. But today that plan is changed, and Rory and Lita, along with a houseful of dogs, are happily set as residents of movietown. To Lita the change seems perfectly natural. She feels that Rory was easily domesticated because for the first time in his life he has what he has been hungering for: a home atmosphere that is his own. “Rory knows I love him,” Lita says, “and I don’t think he ever knew that about anyone else before.”

In other words, Rory’s outdoor living was perhaps an escape from the city living to which he felt he didn’t belong. Even as a boy, Rory took to the woods around Santa Cruz, California, whenever possible. He liked to cook his breakfast outdoors. The boy felt that the birds and animals were friendly—and today the grown-up Rory is good at gentling strange animals. As he grew older it seemed a natural step from roaming the woods without purpose to hanging around the logging camps. And when Rory was big enough to pull his ‘own weight he left home to become a logger.

Other outdoor jobs followed for Rory. He worked as a hardrock miner in Nevada and as a cowpuncher in Arizona, as a forest fire-fighter, as a fisherman. The story of Rory’s discovery is a familiar one: While he was visiting his grandmother in Los Angeles he went horseback riding one day and met Alan Ladd, who introduced Rory to Sue Carol Ladd, then an actor’s agent. And it wasn’t long before the handsome Rory was started on his career as a movie dreamboat.

In those days, though, a movie career was just a means to an end for Rory. He repeatedly said that he was working only for the time when he could live on a ranch as he wanted to. Then Rory met petite Lita Baron, bigtime singer with Xavier Cugat’s orchestra. And in spite of all his plans, Rory tell in love with the glamour girl who knew nothing of the beauties of nature and cared even less. Rory courted Lita, brought her gifts like levis and plaid shirts. He didn’t take her to the popular Hollywood night spots for dinner; best of all he liked to spend the evening at home with her large family.

Even then, while his plans for the future were undergoing a drastic change, Rory had to light out every month or so for the woods alone, to fish and spend his nights out in the open in a sleeping bag. He didn’t, and in fact still doesn’t, like crowded city life. Rory says that crowds of people bother him, that there are too many of them to tell him what to do, that after a while he feels as if the air has been breathed by too many people.

Relaxed and easy enough on the surface, Rory still seems to feel today that the public life is Lita’s world rather than his, that to her crowds of people pose no problem. He is never very far away from her in their public appearances. “Most of our friends aren’t in picture business,” Lita says. “But at parties I still look out for him just as he does me. If Rory sees me trapped in a corner by some bore, he drifts over and gets me out of it. And I do the same for him.”

Still Rory is courteous almost to the point of courtliness, and he is not at all nervous with small groups of people. Animals don’t like nervous people, and whenever Rory is at home, there are always animals sitting on him or under his feet.

“What Rory needed most,” Lita says, “was to feel that he belonged to somebody.” And for the question as to how to domesticate a character like Rory, Lita has one simple rule: Just don’t pick at him about things. Let him do things in his own way and when he wants to. Lita thinks Rory needs to work with his hands around the house, for that is the only way he can reconcile himself to life in the city. He has repaneled the bar in their home in knotty pine without any outside help, and it is a beautiful, professional job. There is a speedboat resting on two horses out in the backyard, and Rory works on it sporadically to refinish it.

For the past several weeks two elegant-looking doors have been leaning against the side of the Calhoun garage; Rory made the doors for his dressing room upstairs. “Rory might not hang those doors for six months,” Lita says. “But that isn’t important. What’s important is that he doesn’t have to hang them until he gets around to it, and he knows it. What he always has minded about cities was all the people, the rules and the regulations, the what-to-do and the what-not-to-do.

“If Rory got that on the outside and at home, too, he couldn’t stand it. We don’t have any do’s and don’ts and he does everything he does wonderfully because it’s natural with him. Here he is a married man with a wife who loves him; he is responsible for me and the house and the animals and the ranch. We depend upon him. It gives him a feeling of having roots, of being permanent, and he’s proud. And when a man’s proud, he’s happy.”

When Rory comes home from the studio—his latest for Twentieth is “The Silver Whip”—he doesn’t bring his acting problems with him. For this domesticated man, home is the place for relaxation free from his daily job. And if there’s any doubt as to Rory’s complete domestication, take the word of outsider Debbie Reynolds.

“I never knew Rory and Lita very well until we went to Korea for Christmas,” Debbie says. “On the plane Rory’d swap seats with me for awhile; he’d go up and play cards with the guys while Lita and I sat and talked. But I was wasting my time if I thought I could sleep. Next thing I’d know this big character would be rattling my bones and saying, ‘Beat it, peanuts. It’s past your bedtime. And besides, it’s time I saw my wife.’ ”