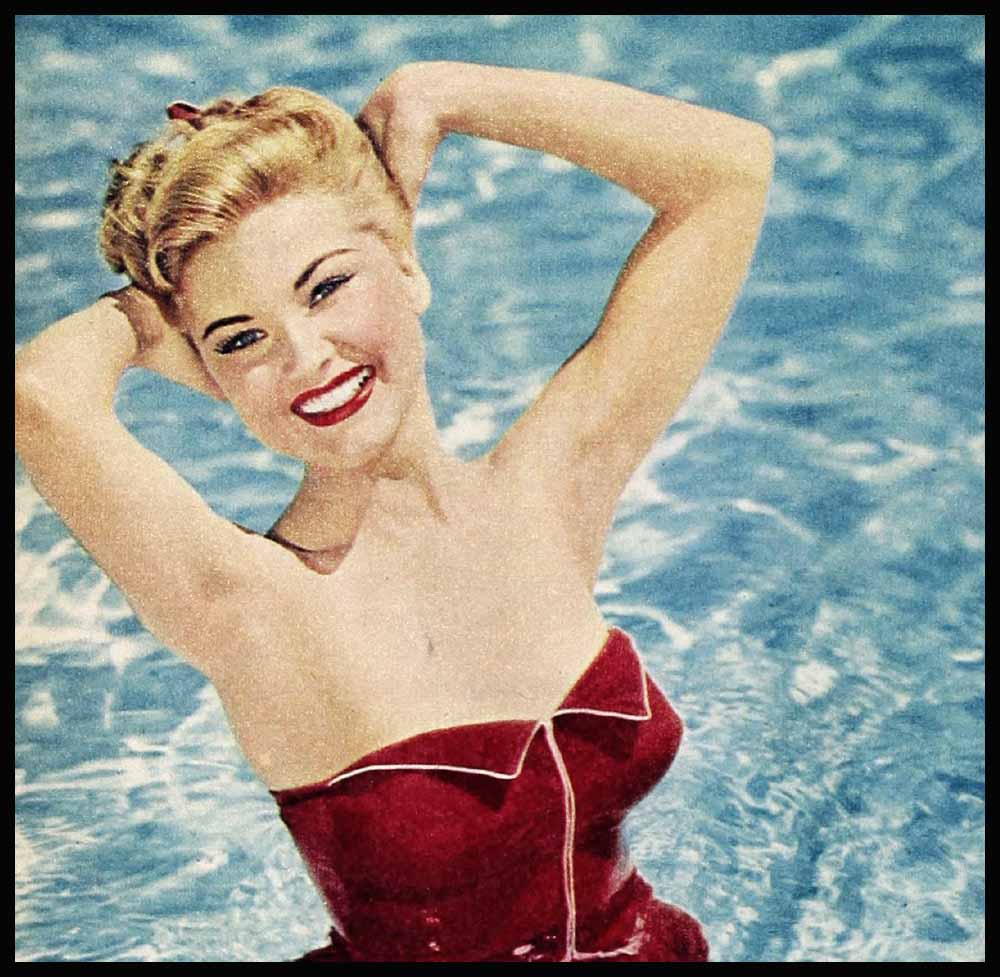 Man Power: Studio headaches have nothing on those of a Hollywood hostess. Every time an unattached glamour girl receives a party invitation, she requests: “Can’t you arrange for Jeff Chandler to call for me?” According to Rocky Cooper, who is the town’s top social leader, Jeff’s the most eligible escort—and he couldn’t be less impressed!

Ripe Dates: Scott Brady and Nora Eddington Flynn Haymes who like to hit the night spots, finally got around to hitting them together . . . But Terry Moore, who was so thrilled when Rock Hudson invited her to “The Robe” premiere—got stood up! At the last moment his studio sent him to the “Magnificent Obsession” location at Lake Arrowhead . . . Bob Wagner and Mona Freeman, rumored to have romantic interests elsewhere, made their first public appearance together at this same premiere. Yes, both have the same press agent! . . . Tab Hunter and Jeff Selznick (son of the producer) invariably try to date Debbie Reynolds on the same night. Now when it happens they flip a coin—and their wigs!

Baby Talk: It’s a girl for Esther Williams, who was so sure she was going to have a third son she didn’t have a name ready. . . . Not so with the Tyrone Powers. Although Linda’s astrologer predicted a boy, they had another girl whom they’ve christened Taryn. It’s supposed to be a contraction of their names. We don’t get it, either! . . . Once again Shirley Temple Black’s reserved the same room in the Santa Monica Hospital where she was born. Her third child arrives next March. . . . A tired Dean Martin went right from the plane (he had been on tour) to the hospital where his Jean presented him with their second son.

False Alarm: The tension in the room was almost suffocating. Elizabeth Taylor’s mother along with M-G-M’s top brass sat staring into space. Finally the phone rang, their long distance call to Copenhagen came in. “Liz is fine,” Michael Wilding’s voice assured .the anxious ones. “She didn’t have a heart attack, as rumored, but she is tired and nervous from flying around Europe and sort of collapsed. Tell everyone not to worry.”

Set Stuff: Instead of his name, “Golden Boy” was lettered on the back of the set chair Bill Holden received from Barbara Stanwyck the day they started “Executive Suite.” It was quite a camera reunion, their first in fourteen years and since then Bill has indeed become the golden boy of the movies. At the box office that is! … What a set chore for Twentieth! For retakes, it had to duplicate the river and the raft which were used by Marilyn Monroe and Robert Mitchum on the “River of No Return” location in Canada. Between takes, while the world series was playing, an assistant rowed out to the raft with a portable radio—so Marilyn and Bob could listen! . . . Never a dull moment with Bing Crosby around. The day they started “White Christmas,” he made quite an entrance. The groaner rode through the huge sound-stage door on the back of Rosemary Clooney’s Great Dane, “Cuddles”!

Wishful Thinking: Someone at M-G-M got the bright idea of dusting off “Sally, Irene and Mary.” an early-day Joan Crawford movie. The re-make would star Lana Turner, Ava Gardner and Rita Hayworth, if a miracle could get them together for one picture! . . . And Twentieth is still holding out hope that Bette Davis, in Massachusetts and well again, will realize Hollywood salaries have nose-dived. The studio wants her to play “Queen Elizabeth I“ which she also wants to do —hut at her price, not theirs.

Are We Ambitious! “If you want something, go after it,” says Terry Moore, which is exactly what she did. The second Shirley Booth arrived in town to make “About Mrs. Leslie” for producer Hal Wallis, Terry appeared in his office and begged to be in the film. . . . And Barbara Stanwyck, who rushes from job to job, says she’ll only make four pictures this year instead of her customary six!

It’s True That: Debbie Reynolds, who has done such tremendous good-will work for M-G-M and the industry, wants more money. Her small salary has never been adjusted since she started at the studio. . . . Piper Laurie has been voted “The Redhead of the Year.” Good voting: her titian-tresses do not come out of a bottle . . . Joanne Dru’s three children by Dick Haymes were christened in the Presbyterian church recently. And school, the oldest girl insists on going under the name of “Pigeon” Ireland, because she is so crazy about step-father John Ireland. . . . “Choose Your Star” winner Pat Crowley isn’t the sexy type and wishes Paramount would lay off the cheesecake. . . . Rita Hayworth and Dick Haymes realize the power of a good press. After their wedding they recorded an interview with famous columnist and Photoplay writer Sheilah Graham. Then the engineer cracked the record! The pair came back and re-recorded it.

Welcome Mat: June Haver who gave up $3.500 a week for life in a convent bark in Hollywood again. She loved the religious life but lacked the physic strength to perform her duties. Ann Blyth’s flowers and words of cheer were the first to arrive Thousands of sympathetic letters pour in daily, for everyone knows June’s decision was a hard one.

Last Laugh: About five years ago an unknown actor tested with Joan Crawford for a top role in “Flamingo Road.” Winning it would have made him famous. Alas, he was so inexperienced, director Mike Curtiz stopped the test before it was finished. Today the same actor is starring with Joan in “Johnny Guitar,” her first Western. She was thrilled to death when they signed—Scott Brady! . . . After twelve years in Hollywood, and a recent lull in his career, Van Johnson is coming back strong. His tough-guy role in “The Caine Mutiny” has him in the running for of all things. Westerns.