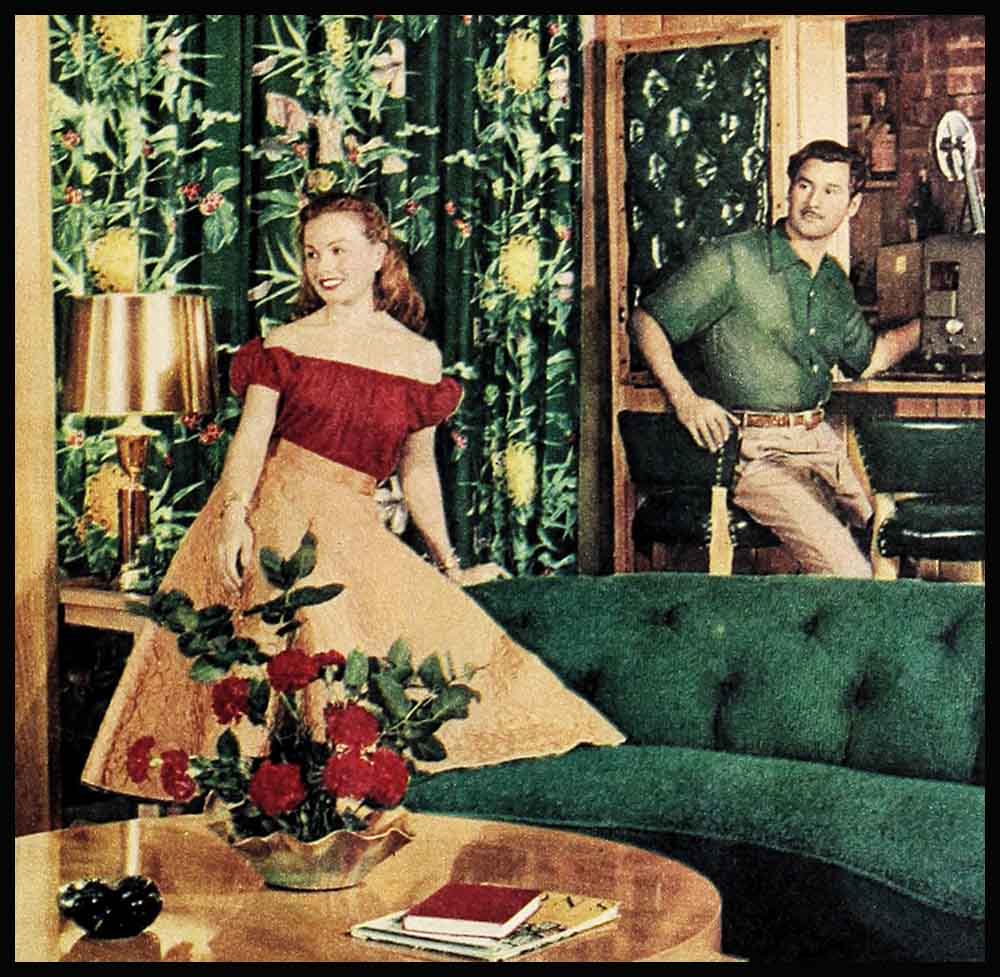 Plot For A Home

It’s no trick to start Jeanne Crain and Paul Brinkman talking about their house. For they have taken four years to get a house that’s right for them, and it isn’t finished yet.

The setting of their house is perfect. Their land, scooped out of the side of a hill, overlooks what seems to be most of Southern California. Behind it the hill rises sharply, and the ground falls away on the other three sides, giving absolute privacy.

When Paul first found the land, he planned to purchase just one acre, but ended up with the whole cove, most of which he subdivided and sold, saving several acres and the original spot which had caught his eye for him and Jeanne.

Originally the house itself encompassed 2,400 square feet, today it’s 3,400 square feet, and when it attains full growth will have about 4,500 square feet. “I’d rather have fewer rooms,” says Jeanne, “and have them large, than have a lot of small rooms.” She’s entirely right, because you can create a more harmonious room if the space is large. Better to double up the uses of a room, combining a living room and a den, for instance, rather than have a small living room and an even smaller den. Den-dining rooms are popular now, too, and another recent trend combines kitchen, den and dining room.

Right from the beginning, Jeanne and Paul planned the house as it eventually would be. Originally it had just one bedroom, but they knew where two additional bedrooms and a bath would go, and the doorway that would lead to all this was already framed in the hall. So when the Brinkmans added their first wing, all they had to do was knock out the opening.

The second wing will be added to the other side, so that when finally completed, I the house will have a modified “X” shape. A large playroom’s contemplated in this new section—to relieve wear and tear on the rest of the rooms. As Jeanne says. I “When you have children, either the house suffers or the children suffer, and we think our children are more valuable than the house. So, the house suffers.”

The idea of having the plans for a completed house all ready, but building a little at a time, is a good one The Brinkmans built when building was difficult, right after the war. In fact, they camped out in the house for awhile, during the finishing-up process. Carpeting was a “must” to provide warmth for their firstborn, Paul, but other than that, they used candles for illumination, rented beds, ate from card tables, and sat on boxes.

The Brinkmans’ house, hidden from view until you round a curve on the driveway, is a low, modern building of fieldstone and redwood, with the windows set high to let in light and guarantee privacy.

As you enter, there’s an oak closet partition on the right and a plant box in front, which is backed by panels of corrugated opaque glass that stop at the ceiling. These glass panels are about a foot wide, and travel down each side of the plant box, about a foot apart, alternating, so that you have the effect of a solid wall Your vision of the next room, the dining area, is obscured, yet there’s plenty of light and room for plants to grow.

The Brinkmans continued the exterior feeling of the house into the interior through the materials they used, but instead of redwood paneling inside they chose ¾” oak planks, and gave them a wonderful natural finish. The fieldstone was repeated in the fireplace, but. this posed an unexpected problem. The builder was afraid that a plaster ceiling would be cracked by the weight of the fireplace. So Paul bought some 2 x 8 kiln-dried fir planks Split and left rough, these were put on the ceiling. Linseed oil mixed with green stain was applied, then wiped off, which left the wood with a slight green finish, toning in perfectly with the rest of the house.

The fieldstone fireplace is framed with oak. There are floor-to-ceiling windows on the fireplace wall, high windows opposite and oak panels on the walls.

They lined the wall under the high windows with long bookshelves and under the bookshelves they placed an enormous red sectional sofa, four pieces, each section the size of a love seat, and at one end, its back to the closet partition, is the radio phonograph. At the other, against the wall, stands the piano. The long red sofa, plus two curved green sofas that flank the fireplace, provide plenty of seating space when needed, yet they don’t crowd the room. If enough chairs were used to provide the same amount of seating space. the room would look like a hotel lobby.

Paul designed all the furniture except the green sofas and the dining-room group, and had them made at his furniture factory. Even though you can’t do this, you can be sure that each piece you choose is as right for your room as if you had it made to order Don’t buy a table or chair you see in a store just because it seems exceptionally attractive. Picture how it will look with your other furniture.

Occasional pieces finish off the living room A round, blonde coffee table in front of the fireplace, two black lacquered end tables complete with ceramic lamps at each end of the sectional sofa, two antique mirror-topped tables with brass lamps beside the fireplace.

The dining area’s at one end of the living room. The entire group is of natural wood, modern style, with pedestals of combed wood, dining seats in a lime and yellow pattern. The sideboard against the wall matches, and has a separate glass front top for china and glasses.

From the dining area, naturally, you go into the kitchen, a gay combination of red and white, with red formica counter tops and splashboard, white cupboards and woodwork, and the two colors combined with green in a cheerful strawberry-patterned paper for the walls. White ruffled curtains finish off the windows. The kitchen’s in an “L” shape, the working section in one part, a red formica-topped table in the other, surrounded by pine captain’s chairs with red leather cushions. Red linoleum covers the entire floor.

The most-talked-about feature of the kitchen stands in the heel of the “L,” and that’s an indoor brick barbecue. The first time the Brinkmans used the barbecue, they cooked a prime rib roast, and brought each guest into the kitchen to see it and smell it even before he removed his coat.

“You see,” explained Jeanne, “we think that barbecued food tastes much better during the cold months, and the fire looks so cheerful on a gray day. So we put this barbecue indoors where we can really use it.” On their flagstone terrace there’s also an outdoor barbecue, but it’s more often used for fires than for cooking.

Their bedroom is at the opposite end of the house. It’s large, with two walls of windows to take advantage of the superb view. Louvers above admit air, and sliding doors open on to the terrace. These are hung with gold draperies which blend with the bedspread and dust ruffle. The spread has a chartreuse design woven on a silver-gray ground, and the ruffle repeats the yellow. All the floors are carpeted with the same gray broadloom, and the bedroom wallpaper uses the gray for background color, featuring a bird-of-paradise design in yellow, blue and coral.

They placed the shadow box fireplace against oak paneling, and the grouping in front of it includes a blonde, free-form coffee table, together with a channel back chartreuse loveseat.

The blonde desk boasts an idea you can borrow. The two bases and the top are three separate pieces. Since the bases— bookshelves on one side, drawers on the other—are the size of nightstands, the Brinkmans can utilize them for that purpose any time they wish. If you’ve been wanting a desk, why not make one by placing a wood panel aeross the tops of two night stands? The Brinkmans curved the top of their desk, which is composed of a thin real wood veneer combined with a layer of formica and a layer of fiber

glass, all put under terrific pressure. The result is a handsome surface that can take spilled drinks, carelessly placed cigarettes and all the other hazards to furniture in a modern home. “Someday,” says Paul, “we’re going to have a dining table with a top like that.”

Jeanne and Paul put family photographs in the bedroom, and that should be the rule in your home. Such pictures are too personal to add anything, decoratively speaking, to a living room, unless you’ve a portrait that is a work of art.

The headboard of the bed is modem, to go with the rest of the furnishings, and it includes the two nightstands in the one unit, all of blonde wood with touches of chartreuse leather.

Adjoining the bedroom is an enormous dressing room. Woodwork and cabinets are gray and the ceiling coral. Wardrobes line the walls and a storage partition divides the dressing area from the bath area. Soft coral Carrara glass surrounds the two washbasins, picking up the coral from the paper on the walls.

The dressing room is large enough to double as a nursery, and the newest baby always sleeps there in his bassinette. Right now young Timothy has it.

Someday he’ll graduate to the nursery wing, where Michael and Paul share a room which is just right for boys, with a minimum of furniture, natural finish hunk beds and two matching chests. The floor’s yellow and brown linoleum, and the walls contrast with pale green. Whimsical animals decorate the sturdy sailcloth curtains.

A small bar separates living room and master bedroom, its entrance in the hail, the counter side in the living room. The inside of the doors that close it off wear deep button tufts of green leather, and cushions on the bar stools repeat the green leather. It’s a projection room as well, for Paul keeps his projection machine behind the counter on the floor. It’s ready in a jiffy for showing movies, as is the screen which stands in the dining area.

Part of the charm of the house lies in the surrounding landscape, for it’s completely casual. A lawn frames the swimming pool on the front terrace, but native trees and shrubs cover the hill.

Paul and Jeanne knew what they liked. They were not afraid to try out their ideas and they were willing to wait to get the effect they want. All this adds up to a home that’s completely delightful inside and out.