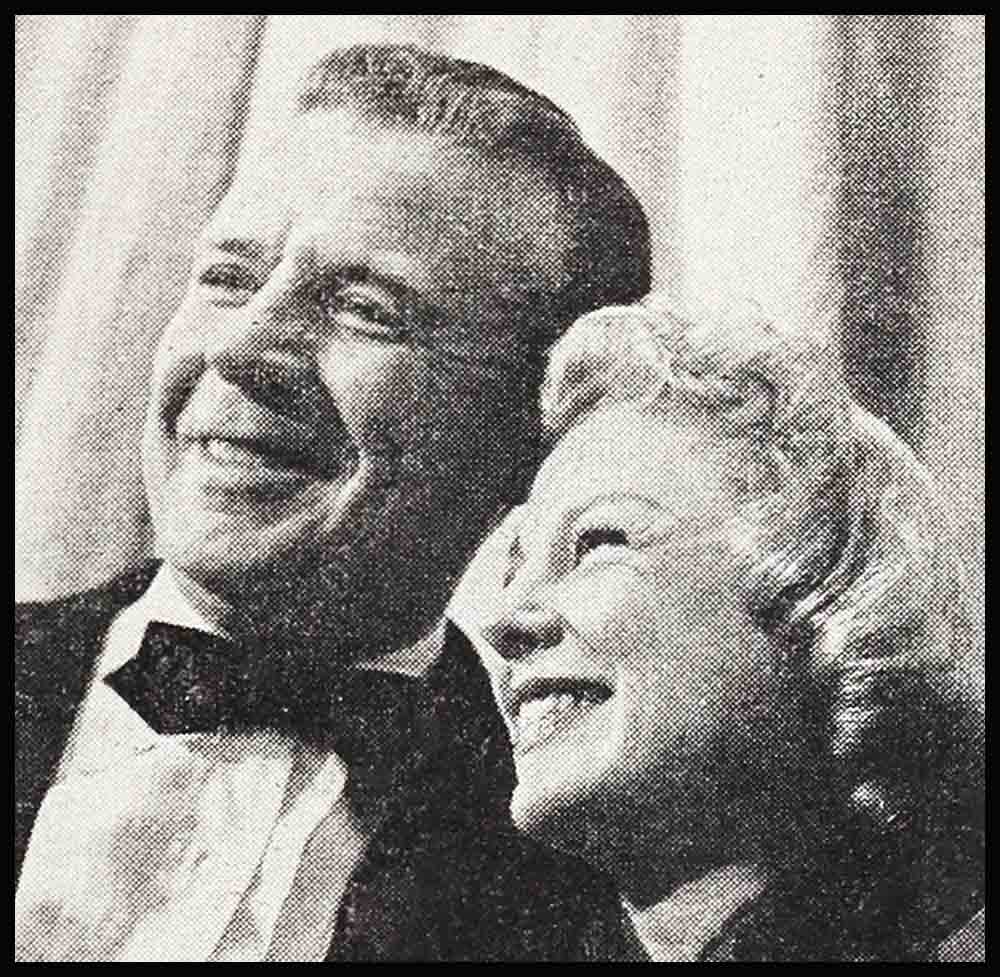 Love and Marriage: Hollywood was rampant with rumors the week both Lana Turner and June Allyson separated from their respective husbands. The Dick Powells’ splituation, it seems, came as no surprise. Those who have been expecting it now come right out and predict there will be further news concerning June Allyson and Jack Lemmon when both are legally free. Lana Turner and Lex Barker, however, caught the town off guard. A few days before their breakup, they discussed enthusiastic plans for building that home on the property they own in Acapulco. Lana hasn’t worked in a long time. Lex has gone from picture to picture, which left his wife with too much time to brood over the loss of their expected baby. Despite the announced separation, Lex kept on striving for a reconciliation, and insiders say there’s every chance he will succeed in rebuilding the marriage. Gene Kelly and Betsy Blair, on the other hand, have made their divorce final. with everyone sorry for two nice people.

Mr. Lucky: Recently Tab Hunter, whose first royalty check for “Young Love” was for a neat $21,000. told us the real secret of his singing success. “I visualize a beautiful girl,” he said. “Then I pretend there’s no one else in the world and just sing into her ear.” It’s true that Tab made more from one record than he earns at Warners in a year. But the studio loves him. He was all set to see Europe again when they made him a cozy proposition. In return for postponing his date of departure and hitting the road to plug “The Spirit of St. Louis,” Warners agreed to pick up Tab’s tab for the entire European trip.

Home Life: Despite his great success, Rock Hudson is far from being a wealthy man. In fact, until “Giant” he earned little more than a featured player. So Rock and Phyllis toyed with the idea of renting their house while they’re in Italy making “A Farewell to Arms.” Word leaked out. their phone rang day and night and people who wanted to sleep in Rock Hudson’s bed stampeded the place. He quickly decided not to become a landlord. . . . Miss Carrie Frances Fisher will probably be supporting the “old folks” if her luck holds out. Debbie and Eddie’s daughter now owns an oil well, sent to her by a Texan who greatly admires her famous parents! . . . Lita Baron Calhoun, who had her baby girl and named her Cindy Frances, had a time keeping up with her dress sizes. It’s all to no avail now. of course, but just before the baby came she had to keep her shower guests waiting for an hour while she frantically altered her skirt, to make it larger.

Girl and Woman: Did a director-friend of Natalie Wood suggest she consult a psychiatrist to determine why she’s so restless and impulsive? To us, she’s just young. high-spirited and filled with the joy of living. There’s nothing wrong with her that a few years of maturing won’t cure. . . . Everyone knows Clark Gable prefers to keep his private life private, but he didn’t object when his beautiful bride (the King calls her Kathleen) told all for national publication. Kay got paid for the article and turned the check over to charity. You know that wherever she goes she always carries those tiny nitroglycerine pills prescribed for her particular type of heart ailment. She jokes about it, too, which is so typical of Kay’s gay, indomitable affinity with life.

Blues in the Night: Things can’t get worse for Russ Tamblyn. He’s subject to the draft and until he started “Don’t Go Near the Water,” he hadn’t worked in a year. Valentine’s Day was the first anniversary of his marriage to Venetia Stevenson and they celebrated it by signing divorce papers. When Russ moved out he took a small house on the sands of Malibu. His good friend, Larry “Bud” Pennell, is sharing it, and here’s a bit of irony. Talented Russ composes songs and music publishers are flipping over his latest. The title? “When Love Is Young”!

Romance Lane: Marlon Brando making “Sayonara” in Japan kept in constant touch with Anna Kashfi. No one knew about it because the Indian beauty asked her studio to soft-pedal the publicity. . . . Jane Wyman denied her next husband will be a handsome TV executive. Susan Hayward denied she was going to marry Eaton Chalkley too—until she married him! . . . Beautiful Pat Hardy knows exactly what Richard Egan likes to eat, because she goes marketing with his mother. Pat didn’t say it, but the fact still remains: The way to a man’s heart is you know what.

Win or Lose: It doesn’t happen often, so you know Paul Newman was deserving. The town was indignant when he lost an Oscar nomination for that brilliant performance in “Somebody Up There Likes Me.” Despite Paul’s aversion to living in the spotlight, word leaked out that Joanne Woodward will be the next Mrs. Newman. She’s the talented young actress 20th Century-Fox picked for the tough title role of “Three Faces of Eve,” who was psychoanalyzed “to help me understand the people I play.” Their studios say it’s friendship but friends says it’s love. . . . This came straight to us from an eye witness. The evening was late, most of the guests had departed. but amongst those remaining were the Dan Daileys. It isn’t news that they quarrel publicly. This time, one word led to another until Gwen tossed a drink in Dan’s face. He just sat there and said nothing. According to our informant, Gwen said, in effect, that she envied one person, Gloria Noble. As you know, Gloria is the second Mrs. Donald O’Connor. When Gwen was married to Donald, she was so unhappy she divorced him. Eventually she married one of the nicest guys in Hollywood, Dan Dailey. Where do we go from here?

Ava, Dear Ava: This could be one of those stories that doesn’t have to be believed. but it is said that Ava Gardner, driving recently from Madrid to Rome, stopped off in Nice and phoned the palace at Monte Carlo to ask after little Caroline, only to find she couldn’t get Caroline’s mother, Princess Grace. on the phone. Perhaps the palace servants didn’t really believe it was she, but whatever the reason, Ava undoubtedly was very upset. Incidentally, Ava quite unknowingly started a small scandal in France during this drive, which she made with her sister Bea in her new white Cadillac. Foreign tourists are allowed all the gas they need in France. in spite of the shortage, but they have to get it legally—that is, by applying for coupons at the local police headquarters or automobile club. Ignorant of this, Ava blithely crossed the border from Spain with a powerful car and not much gas in the tank. In her own way she managed to get enough of the stuff I to get her to Nice, where the local authorities gallantly promised to reimburse the stations at which she had stopped with the coupons they needed. But it was strictly against the rules, aside from the fact that Ava is not very likely to have a careful account of just where she got gas, and how much.