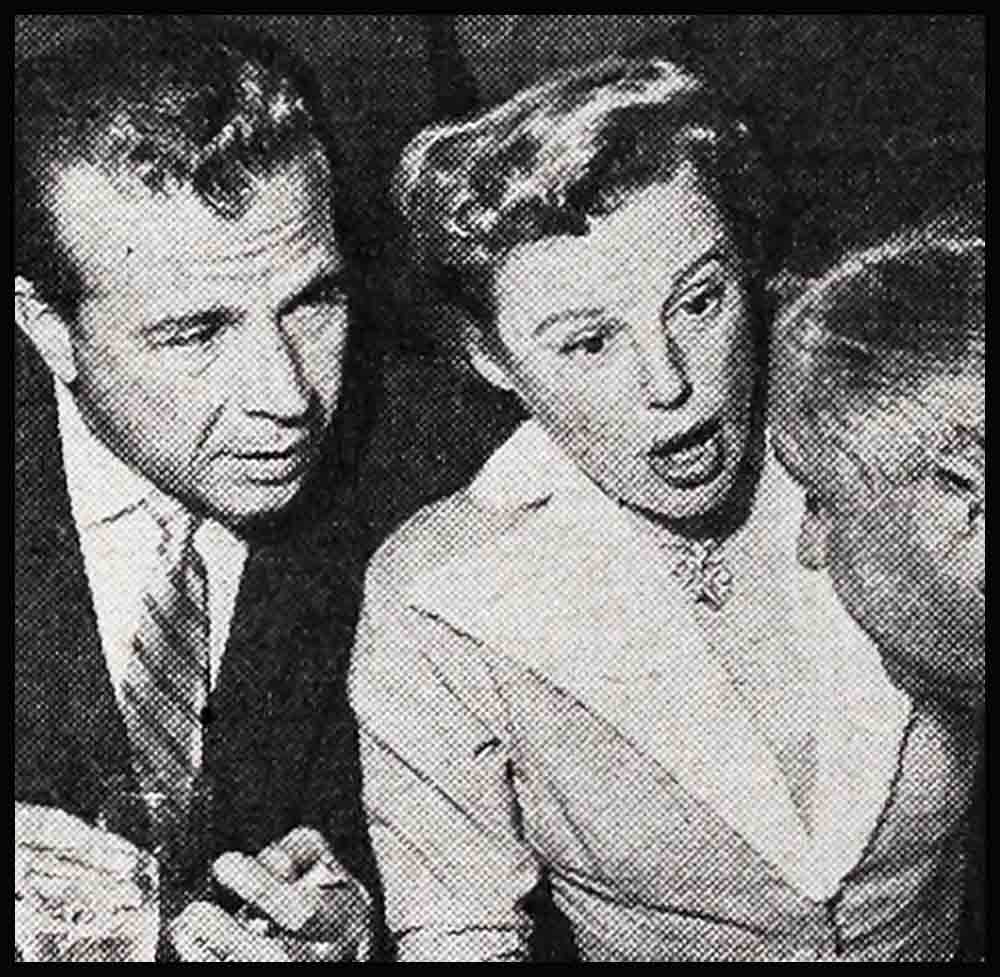 I have the impression that Arlene Dahl and Lex Barker are hep to each other . . . Such taxi drivers’ words occasionally come from such a pretty face as Jean Simmons’ . . . There’s nothing the matter with a good picture that great business can’t fix . . . I could never cast Olivia de Havilland and Joan Fontaine as sisters, but I would cast Janet Leigh and Marge Champion as sisters, though they’re not . . . Pat Wymore wears mink-trimmed panties.

You could have won a bet from me on the success of Zsa Zsa Gabor . . . Charles Laughton lives in an old rambling Hollywood house. He describes the interior as “early Mable Normand style” . . . I saw a photograph of The Monroe with her mouth closed and I hardly recognized her . . . John Lardner’s description of Cinerama: “There’s enough screen to show the longest dachshund stalking the longest liverwurst” . . . Great gams which should be seen oftener: Those belonging to Jane Wyman.

I am especially fond of Jerry Lewis, when at a testimonial dinner he declares, “I can’t get serious. It makes me nauseous.” . . . Tony Martin sleeps in an extra-large double bed. “Do you know what I always say?” he says. “Single beds are made only for single people.” . . . Betty Grable is one of the few gals I know who really looks delectable in a butch haircut . . . Marie Wilson uses a beer shampoo, explaining she might not get much lather, but she has the happiest hair in town . . . Anne Baxter should know that a cigar is only a smoke, but a woman’s a woman.

I can’t understand men getting tired of Lana Turner. I just can’t . . . In every movie, Kirk Douglas must have a scene in which he appears with his shirt off. So if Kirk offers you the shirt off his back, it doesn’t mean anything . . . Roberta (To See Her Is to Know Her) Haynes is the best example of a simple, plain girl who photographs as a sex bundle . . . Julie Harris’ summary of making a movie, “You sit on the set and sit and sit and then you work for twenty minutes. It’s harder on your bottom than on your top.”

I know that Ava Gardner’s luggage puzzled the customs officials, especially the item marked: “One dozen nude brassieres.” . . . I sometimes think Debbie Reynolds doesn’t believe she’s a movie star, even when she’s signing autographs . . . Sinful waste of talent: Mickey Rooney . . . Jane Russell’s pet name for Marilyn Monroe is “The Round One” . . . If I were in charge of a studio, I’d do a father-son story with Aldo Ray and George (Foghorn) Winslow in the leading roles . . . What’s with Van Johnson and those crazy red socks he’s wearing these days?

I seldom visit the Beverly Hills Hotel without recalling that not too long ago, it was a barley field . . . You can’t sell me those movie stars now in Europe who are starring in “It Takes Me Eighteen Months to Beat the Income Tax” . . . I wanted to pull that pipe out of Dick Powell’s mouth in “The Bad and the Beautiful” . . . Terry Moore is gaining in popularity, and without the help of a calendar . . . I’m a sucker for a movie about Hollywood. I’m ready to see Humphrey Bogart and Gloria Grahame in “in a Lonely Place” again . . . Robert Wagner combs his hair carefully before going to bed, and he likes to sleep in a draft.

Beverly Hills is loaded with English-made cars, which caused Jackie Sherman to remark: “There’ll always be an England as long as there’s a Beverly Hills” . . . I can’t wait for the next Shirley Booth movie. Please, “Come Back, Little Shirley” . . . There’s something about matching names. I’d like to hear Tony Martin and Dean Martin do a song together; Jane Russell and Rosalind Russell do a comedy scene; and team Paul Douglas with Kirk Douglas.

Tony Curtis and Janet Leigh, who are married, always look like a couple of kids out on a date . . . Monica Lewis was singing in a night club when M-G-M signed her. After a few so-so pictures, she was given her release. Monica returned to the night clubs where M-G-M saw her and wants to j sign her . . . June Allyson has changed in many ways, but still “wonder and amazement ooze out of her like toothpaste gushing from a tube” . . . Katie Grayson singing “Remember” in “So This Is Love” is really something. I never heard the song done better … I watch “Moulin Rouge” and can see John Huston directing . . . I’m proud to have said many columns ago that Gloria Grahame was great and the public would get wise to her . . . Instead of remakes, let’s have a few reissues.