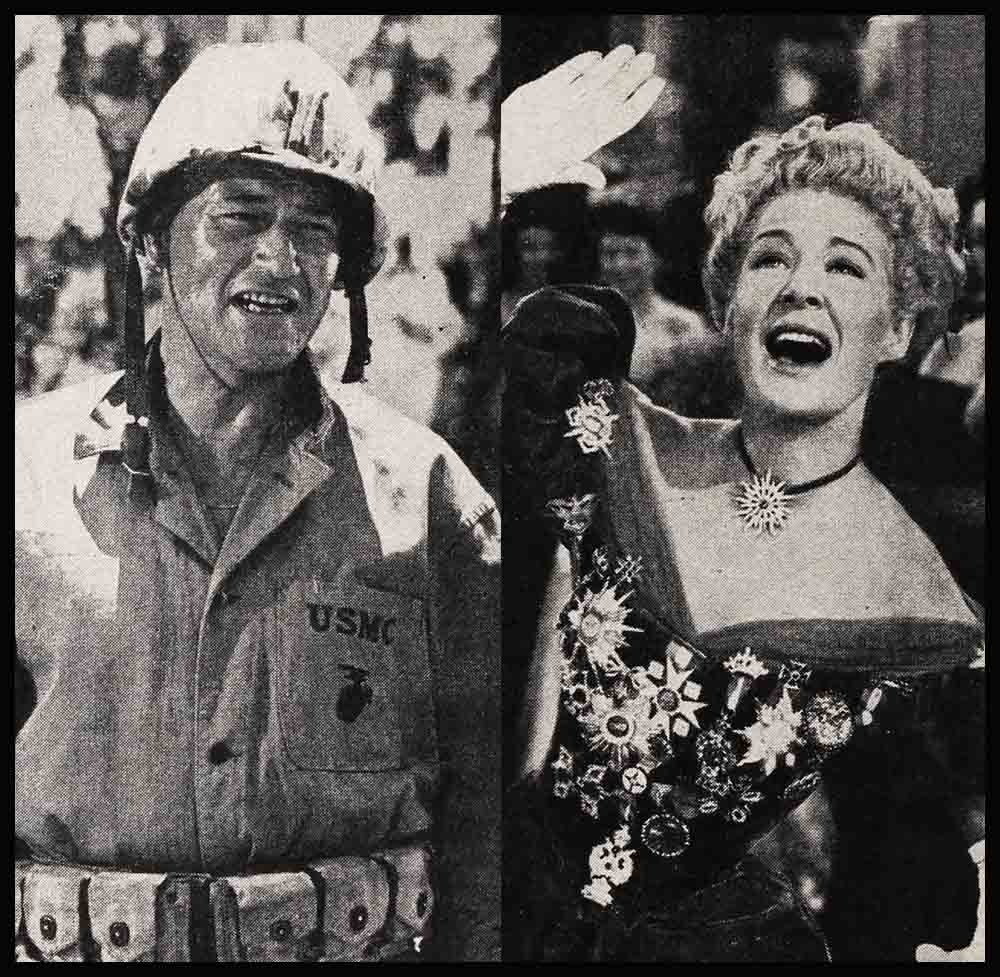 Once again it is Gold Medal Award time. The votes you, the movie-goers of America, have cast throughout the year for the pictures and performances you most enjoyed have been tabulated. And on the pages that follow, the winners are listed.

The presentation of Photoplay’s Gold Medals will take place on February 12 at a glittering reception which will be attended by hundreds of Hollywood’s leading players, directors, producers and writers.

Prior to the reception, the Lux Radio Theatre will offer a one-hour dramatization of the picture you most enjoyed over the CBS radio network (9 p.m. EST) with the original stars cast in the roles they played on the screen. On February 13 the nation wide network of the American Broadcasting Company (from 10:35 p.m. to 11 p.m. in all parts of the country) will feature the Awards ceremony as it was taped at the moment the most popular performers and those associated with the most popular pictures received their honors. Newsreels will cover the scene. And Ralph Staub will devote his popular short subject “Screen Snapshots” to it.

The presentation of Photoplay’s Gold Medals—based on the only poll that represents the choice of you, the people, for whom the movies are made, once again becomes an outstanding Hollywood event.

To the winners the editors of Photoplay offer their congratulations.

Again Photoplay Magazine announces the results of its annual national poll, in which you, the people of America, vote for the pictures and performances you most enjoyed in 1950.

Since we began this poll seven years ago your tastes in performances and pictures have reversed themselves completely. In the beginning, in 1944 during the grim days of World War II, it was the gayer, lighter pictures that were, understandably enough, your favorites. And, above all, you voted for the players who had represented laughter to you.

Now, our Audience Research interviewers report that your tastes have become more sober and thoughtful. The past year has somewhat resembled the warlike atmosphere of the year in which we began this national poll. It has been a year of sad tension for America, containing the tragedy of Korea together with threats of another world war. But you no longer favor frivolity, as you did in 1944.

The Photoplay Gold Medal Awards for 1950 go to:

The picture “Battleground,” the film you the people most enjoyed of all pictures released during the past year.

Actor John Wayne, for his role in “Sands of Iwo Jima,” whom you voted as your most enjoyed actor in a given role.

Actress Betty Hutton—your only deviation from grim reality to gaiety—for her most enjoyed performance in “Annie Get Your Gun.”

The top five pictures in popularity are all serious dramatic pictures—despite the fact that you the people always insist, “When I go to the movies, I want to forget my troubles.” Three of your five top-popularity pictures for 1950 were war pictures (“Battleground,” “Twelve O’clock High” and “Sands of Iwo Jima”); one was a drama dealing with racial prejudice (“Lost Boundaries”); and another was the troubled political drama, “All the King’s Men.”

Sixth, seventh and tenth on the list of the ten most enjoyed pictures were comedies, “Father of the Bride,” Adam’s Rib” and “Cheaper by the Dozen.” A family drama, “Our Very Own,” takes ninth place and a musical comedy, “Annie Get Your Gun,” rates eighth.

Not long ago—in 1947—experts insisted the public wouldn’t patronize war pictures so soon after the finish of World War II; and that never would pictures dealing with racial prejudice be popular. You have proved the falseness of both suppositions. In 1948 you chose “Gentleman’s Agreement,” a film dealing with anti-Semitism as one of your top ten favorites. In 1949 “Home of the Brave” (which dealt with the Negro’s place in America) was your third favorite picture of the entire year. You also were strongly partial to the pictures “Pinky” and “Crossfire” in the past and now 1950’s “No Way Out” is high in your favor, even though it didn’t make the list. All of these pictures deal with racial prejudice.

Two other films also have had a tremendous impact on you this past year—“The Men” and “All About Eve.” However, they were released too late in the year to be included in the 1950 poll Now to your 1950 most enjoyed actresses—after Betty Hutton. In alphabetical order, the next four actresses you most enjoyed in various roles were: Ann Blyth in “Our Very Own”; Joan Crawford in “The Damned Don’t Cry”; Claudette Colbert in “Three Came Home”; Olivia de Havilland in “The Heiress.”

As for your most enjoyed actors, after John Wayne—again in alphabetical order: Broderick Crawford in “All the King’s Men”; Larry Parks in “Jolson Sings Again”; Gregory Peck in “Twelve O’Clock High”; Spencer Tracy in “Father of the Bride.” You will notice that three of your tops-in-enjoyment actresses acted in pictures that were not on your top ten picture list—Olivia de Havilland, Claudette Colbert and Joan Crawford. The same holds true for one lone male, Larry Parks.

Now for a brief look at the difference of the sexes among you the people. The women of America outdistance the men in supporting all five of the tops-in-enjoyment actresses. (Joan Crawford’s following among women exactly doubles her following among men!) It is the women again who out-race men in rushing to see actors Gregory Peck and Larry Parks. Only two of the top ten actors and actresses have more men followers than women: Spencer Tracy and Broderick Crawford. John Wayne is an actor who is equally popular with both sexes.

It is interesting to know how you answer the question, “If you were passing a theater showing a movie you’d never heard of, which star’s name on the marquee would immediately decide you to buy a ticket?” Your immediate reaction is that, of all the top ten players, the name Gregory Peck would lure you into a theater. After him in marquee magnetism are Olivia de Havilland and Spencer Tracy, running at a dead tie.

It is the boys and girls between twelve and seventeen who, together, form the largest group of Betty Hutton’s admirers. The same holds true of Ann Blyth. Boys from twelve to seventeen are solidly behind John Wayne, and girls of the same age bracket are Larry Parks’s biggest group of fans. The same girls are even more delirious about Gregory Peck—closely followed by their sisters from eighteen to thirty, and the rest of the female population from thirty-one years of age up.

It is these older women (from thirty-one up) who most like Olivia de Havilland, Claudette Colbert, and Joan Crawford—with Joan finding by far her strongest following in this group. Women of the same age also like Spencer Tracy—the actor who, alone of all the top ten stars, has his widest following among adult men from the age of thirty-one up. Broderick Crawford scores more than the other nine with people in the eighteen-to-thirty age group.

There are a few other fascinating facts. Big-city folk enjoy Broderick Crawford twice as much as country people do. And people in the lower income brackets like John Wayne better than those in the higher brackets do. All the other eight top stars are liked equally well by all people in all sizes of cities or towns.

Also, as always, you the people helped your favorite younger players shoot up in popularity during the year 1950. Elizabeth Taylor rose faster than any other young actress in your estimation, followed by Yvonne de Carlo. Among the actors, you cheered on those mad young comedians Dean Martin and Jerry Lewis, giving them the biggest gain in public interest. After them came the ex-war hero Audie Murphy.

Now for a new habit being acquired by you the people! You are developing a strong liking for drive-in theaters. Last July, one in eight of all movie-goers in cities of over 10,000 population watched movies from automobiles. The greatest numbers among the drive-in audience were between eighteen and thirty years of age. Also, those who live in smaller cities were far more interested in attended drive-ins than those who live in large cities . . . and oddly enough, more women went to drive-ins than men. (Our Audience Research polls have consistently shown that men and women attend the usual movie theater in equal numbers.)

Another interesting note: You wanted to see the movie, “Annie Get Your Gun,” ahead of time, more than any other film in movie history—with the exception of one picture. This was “Bells of St. Mary’s.” Perhaps some of your interest in “Annie Get Your Gun” was aroused by the headlined newspaper accounts of Judy Garland’s exit from the picture and her replacement by Betty Hutton. These unexpected publicity stories, plus the studio’s advertisements, may have whetted your curiosity.

Now for a well-earned compliment to you the people. For many years you have been criticized as liking movies blindly—it has been said that you contentedly watched any movie that came your way, be it good or bad. In his best-selling book, “The Mature Mind,” author H. A. Overstreet added his voice to those of your critics when he said the public was bored and frustrated, and that movies were made to “fit the day-dreams of the unsatisfied immature.” Pages later, he added hopefully, “. . . . the time will come in our culture when . . . motion picture producers . . . may . . . find it profitable to appeal to our maturity.”

Well, Mr. Overstreet, the time has come. It came in 1950. Motion picture producers made pictures of top quality in story, dialogue, and acting; newspaper and magazine reviewers lauded them—and the American people approved of them overwhelmingly. In a period in our history when the public might understandably have chosen the frivolous type of film, in order to escape the anxieties surrounding us in these explosive times—it was the picture ot thought-provoking magnitude that proved most popular.

Therefore we salute the excellent judgment shown by you, the people of America . . . and we present to your selected pictures and players, Photoplay’s Gold Medal Awards for 1950. We of Photoplay know of no greater honor.