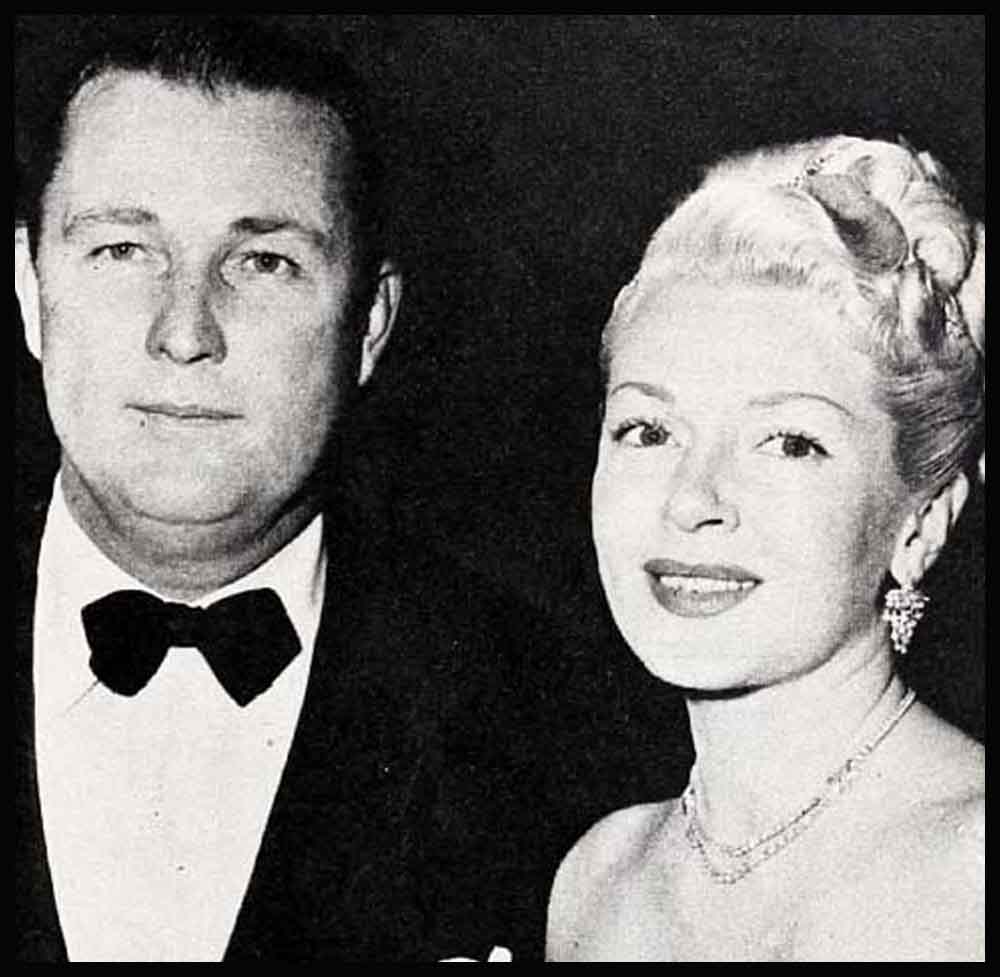 When Trouble Comes In Pairs

“My wife just couldn’t understand,” Dan Dailey told me at the time of his last break-up with Liz. “My world is so completely different from hers. She doesn’t like show business or my friends. And how can either of us do a good job or be happy under those circumstances?”

It takes a very special type of understanding to be married to a movie star. You have to know when to be around, when to be absent—when to be possessive, when to be patient—when to talk, when to “take it.” And it’s difficult for the star, too, who has to reconcile the demands of both spouse and studio.

One of the hates of every movie producer is the mate of the movie star who insists on offering unsolicited advice. They’d rather have a movie mama to deal with any day —and they don’t exactly love movie mamas!

Lana Turner’s husband, Bob Topping, expressed his views emphatically when the script of “A Life of Her Own” was in preparation. Bob didn’t like the story which originally opened with Lana as a middle-aged woman and worked backward. So—the changes Bob insisted upon were made. As things turned out, he should have insisted more than he did. The movie, even with the changes, was not good. During the early production battles, however, Mr. Topping was not exactly popular at Lana’s studio. Probably Lana isn’t as burningly ambitious as she was before her marriage to Bob, who reputedly has millions. And it’s understandable that money sometimes removes the incentive to work. I have an idea she’d give it all up for a couple of babies—or even one.

June Allyson laughs now when I remind her how a certain producer at her studio predicted that her promising career would go down the drain of dreams if she went through with her plan to marry Dick Powell. But time has proved that marriage to Dick, or Richard, as June still calls him, was exactly right for her personal life and her career. The stability at home leaves June free to concentrate on her acting. Dick and June love to work together, they discuss their scripts at home, and find life very wonderful.

I’m wondering how the marriage of Tyrone Power to Linda Christian will affect his movie career. That’s a mating of opposites. Ty, who used to enjoy dashing around the world in his plane, now prefers to stay put. Linda is restless, roams everywhere—even when expecting a baby—flying to Siam, to Honolulu, to Paris, to Rome, to Scandinavia. No one will aver know how disappointed Ty was at the two-time cancellation of the stork, because he isn’t a boy who talks about those things. Ty knows the value of a dollar. Money for Linda is just something you spend. Linda is now resuming her movie career. I hope it is not because she is bored by matrimony.

The immediate effect of Greer Garson’s marriage to Buddy Fogelson was pretty startling. His health became the number one project in her up-till-then careerconscious life! His cattle became more important to Greer than her movies. But she is happier down on the farm in Sante Fe with her all-white glamour cows and bulls than she ever was on a sound stage. So, Buddy has helped Greer, if not with her career, with her life, which of course is the more important.

It’s very cute to watch Vivien Leigh, after any performance with or without her husband, Sir Laurence Olivier, automatically glance towards him for approval. Even when their “Romeo and Juliet” laid an egg on Broadway, Vivien still looked toward Larry for approval. In her sight her mate can do no wrong.

I met the Oliviers first in 1937 in London after they had just returned from Denmark, where they had starred on the stage in “Hamlet.” Ever since that first “Hamlet” they have pooled their public and private lives. In fact, you wouldn’t know where the working life ends and the home begins. Even before their marriage, Vivien accompanied Larry to Hollywood where he was to appear in “Wuthering Heights,” with no thought of making a movie herself. Then David Selznick starred her in “Gone with the Wind.” And they were both on the way up.

To get back to Juliet, it is fantastic that Olivia de Havilland has shelved her Hollywood career, for two years probably, to play Juliet on Broadway and across the country. She just couldn’t find the right picture to make in Hollywood. Fiddlesticks! Other top actresses are finding them, so why couldn’t Olivia? A lot of people in Hollywood will tell you the answer. Marcus Goodrich, her husband. Mark, who spent ten years writing his first book, “Delilah,” and who has been working on the second for about five years now, has taken over one hundred per cent the publicity, pictures, plays, pals, personal appearances, everything pertaining to Olivia. She will stand or fall on the advice of her husband. I hope for her sake that he is the best qualified person to give it.

You’d think that getting married to a good director would be the quickest cut to helping a girl with her career. Well, Judy Garland married a very good director and a very understanding man, Vincente Minnelli. Don’t get me wrong, Vince is not responsible for Judy’s emotional difficulties. Fate has done that to her. All I want to say is, that being married to Vince didn’t bring Judy the calm private life perspective she needs and must have to be able to continue with her career.

Vincente, like Judy, is a creative artist, a man with all the emotion and excitement and turbulence that is part of show business genius, or any other genius. It’s obvious that he has failed to help Judy as much as she needs. And that’s a pity, because in spite of the present status of their marriage—-with their separation announced formally—I think they respect and love each other.

When Betty Grable reported for work one morning with a black eye, the rumor- mongers worked overtime spreading stories of trouble in the Grable-James household. Betty had a perfectly legitimate explanation for the shiner. Something about backing her car into the wrong door of her garage. But even though Betty never complains, it must be a little difficult sometimes to concentrate on your career when your other half is away from home fifty per cent of the year, doing one night stands with his band all over the country.

Recently, in reply to some insistent rumors, Betty made a secret dash to see Harry in the East in the week between the end of one picture and the start of rehearsals for the next. She looked a bit ragged on her return. But the next morning she was toeing the line on the rehearsal stage and no one will ever know what went on in her mind behind the smiling mask.

When Clark Gable married Lady Sylvia Ashley Fairbanks Stanley, you could have knocked Hollywood over with an adjective. The rugged outdoor guy and the fragile wisp of femininity. It couldn’t last, and it could hurt Clark in his picture career, said the know-it-alls. And we all think we are. It has lasted more than a year, anyway. They seem happy. And Clark is suddenly madly ambitious about his movie career. Maybe with Sylvia’s helpful advice, Clark will make some good pictures again. One thing she has done is to loosen the Gable purse-strings. He must have parted with quite a few thousand dollars in the alteration and re-decoration of his small farm in the Valley.

Danny Kaye was unsuccessful as an entertainer until his wife Sylvia wrote the words for him to mouth on the stage and screen. I believe Danny appeared in England years and years ago and was a howling flop. So he certainly owes an awful lot to Sylvia. That is why I was flabbergasted that time when they separated and it was believed that Danny was ready to leave Sylvia for a well-known blonde actress. Danny apparently realized his need or his debt to Sylvia in time. And, although she no longer functions as his associate producer, she did write the songs for his “On the Riviera” picture.

The Alan Ladd-Sue Carol combination has been a thousand per cent successful. Sue wisely stepped aside as Alan’s agent shortly after they married. But Alan never makes a step or a professional move without Sue’s counsel. She is frequently with him on the set. She goes along on his location trips. They are together twenty- four hours, day in and night out. And no two people in Hollywood are happier.

How about Van Johnson and his wife Evie, formerly married to Keenan Wynn? For awhile there, things were pretty rocky, professionally and privately. Some of the fans objected to the circumstances of the marriage. Van, unaccustomed to the usual restraint of any marriage, was restless. There were quarrels, doubts, and “Did I do the right thing?” misgivings. That is over apparently. It’s a happy place, the new big house in Beverly Hills, with little Schuyler and the two boys, Edwin and Tracy Wynn. And Van’s pictures are again making money for his bosses.

I don’t know how much good the new Mrs. Errol Flynn will do career-wise to her forty-year-old Prince Charming. But he certainly has proved a shot in the arm or what-have-you to the professional prospects of Pat. Very few people had ever heard of her before Errol wooed and won her during the “Rocky Mountain” picture. As Mrs. Errol Flynn, who knows how far she will go?

There is talk that Lauren Bacall, who now has agreed to make one picture a year, wants to retire from the screen. I’m prepared to believe it, because Baby has never been ambitious—Bogey has been ambitious for her. He actually wanted to take a poke at the critics who panned her performance in “Confidential Agent,” a picture which incidentally was stolen by a little girl called Wanda Hendrix, whose career was to take a downward dip after she married war hero Audie Murphy.

To get back to Mrs. Bogart, she has been good for Bogey. But for her steadying influence, there might have been many more panda incidents. Bogey is fifty years old. He is nearly double the age of his wife. He’s lucky to have her. And he knows it.

Has marriage to Aly helped Princess Rita Hayworth? Well, she hasn’t made any pictures in the past two years. But can you see the scramble to the box office for the next? I’m told that “Stromboli” has paid back its cost, and made a profit. What would have happened if the Ingrid Bergman-Rossellini picture had been good?

Picking the perfect partner is not easy. But it’s darn important for a movie star whose career success and happiness so often depend on the “other half’s” reactions.