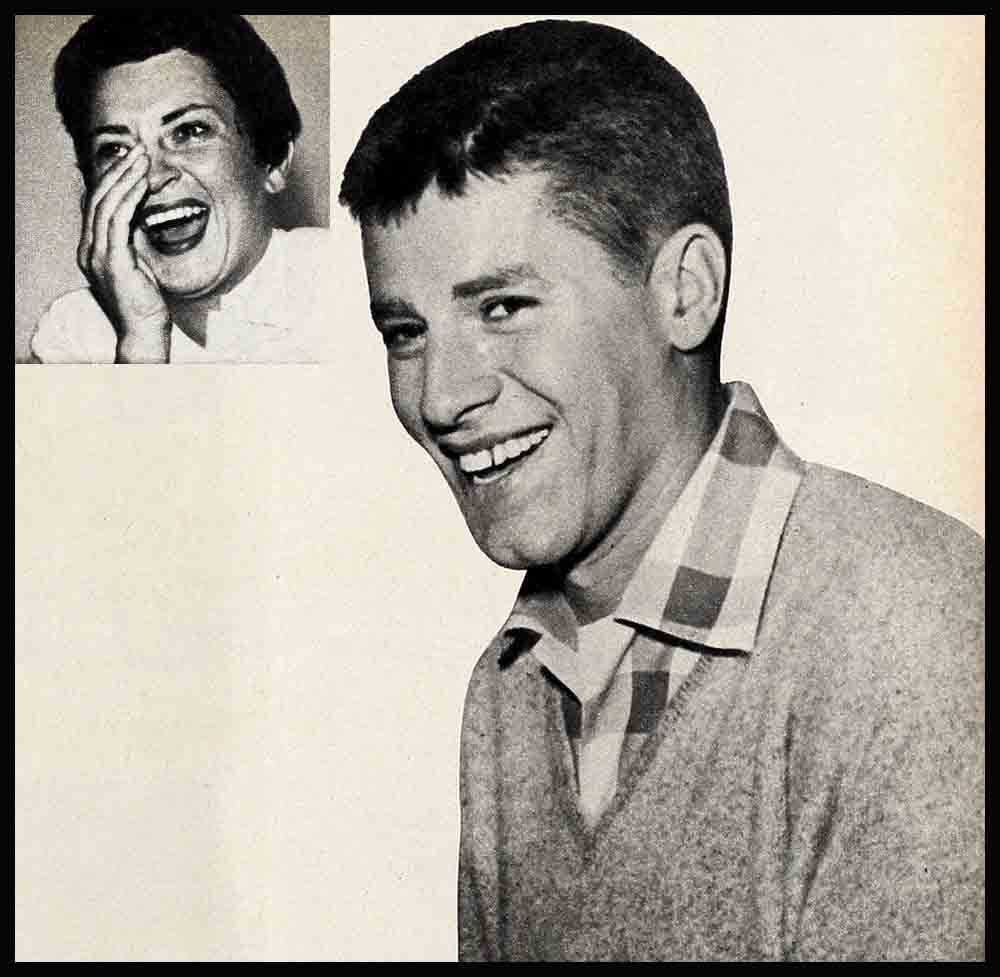 How I Trained My Husband

There was no choice. Jerry had to be taught a lesson in tidiness—or else I’d have to go on picking things up after him for the next sixty years, every time we went on a trip, So I determined to teach him the hard way.

The minute he stepped into the shower—the clothes he’d worn the last few days, as usual, strewn all over the hotel room—I called the desk clerk to send a porter up.

A couple of minutes later, the boy knocked on the door.

“Everything on the floor and chairs goes to the cleaners,” I ordered.

And so off he walked, with all of Jerry’s suits, his shirts, socks, shorts and what-not.

He had just left when Jerry stuck his head out of the bathroom door. “Oh, Pa-a-a-atsy—would you mind brushing off my blue suit, please?”

“Sorry, but your blue suit is at the cleaners, dear.”

“Well—I’ll wear the grey one.”

“That’s at the cleaners, too, Jerry.”

“I guess one of the others will have to do for tonight. . .”

“They’re all at the cleaners. And so are your shirts and socks, and ties and underwear. . . .”

“But Patsy, what in the world happened?” he asked me.

“They were scattered all over the place.” I tried to sound surprised. “Why—I thought you wanted them sent out. . . .” There was a long groan. “Oh, no, Patsy, you couldn’t have. . .

But I did. And since then, Jerry has tried to be neat while traveling.

At our house in Los Angeles, tidiness is no problem with him. It’s the first permanent home he’s ever had. As a kid he was constantly on the road with his parents, who are in show business too, and later on with his and Dean’s act. He is so proud of the home that he is meticulous about everything. Jerry is the first to notice a crooked picture or a book askew. But trying to keep Jerry from letting the funny-man within run away with him at the dinner table has always been a difficult, uphill struggle. Slapping a pat of butter on his wrist, then turning to the person next to him with: “What’s the time, Mac?” is his Number One Gag.

Usually he finishes a meal by neatly rolling up his napkin, holding it over his face, and then letting one side drop down like a curtain. “Finis,” he’ll scream.

This used to embarrass me no end. I remember our first invitation to dinner at the home of Loretta Young and her husband, Tom Lewis. It was a party for thirty people. Jerry was seated next to Loretta and I was at the other end of the table, next to Tom. Despite my fervent hopes and prayers, Jerry went through his usual routine, keeping everyone in an uproar. Afterwards, I apologized to Loretta. ‘Don’t ever,” she said. “Jerry knows just how far to go.”

While Jerry may get away with it when we eat out, at home he gets angry when bur boys, Gary, seven, and Ronnie, three, try to put on their own act. When my subtle jibes at his own “funny” habits didn’t help, I had to resort to more drastic measures. The butter-on-wrist routine upset me most so instead of butter I tarted serving him a dollar pocket watch with his hotcakes. This, he found an amusing switch on his own gag—and it helped.

And getting the kids into the picture has done a lot of good, too. For instance, I eel Jerry needs spinach. Yet I know he’ll scream whenever I serve it. But he’ll cream even louder if the kids—who don’t like spinach either—leave anything n their plates. What to do? Serve the game generous helping to all three of them at the same time. When Jerry starts to make faces, I point to the kids’ plates—and he’ll smile sheepishly and eat!

As yet I haven’t fully succeeded in making him pay attention to me at breakfast time. Between the Los Angeles Times, Hollywood Reporter and the Daily Variety, I can talk my head off and he’ll never even hear me. So, not long ago, I resorted to new tactics: Before Jerry gets chance to pick up his papers, I cut out all the items that interest him most, particularly stories about him and Dean—and hand them over after breakfast. Result: Now slurps his food so fast I still can’t keep a conversation going.

Getting Jerry up in the morning is a problem all its own. I’ve tried to wake him serving hot coffee in bed and turning the radio. No go. So now I send the in as re-enforcements. After they jump all over him, wipe his face with feather-duster, fire their water pistols his face and play the concertina from a wobbly position on his chest—he manages to stagger to the breakfast table.

If only he’d have half as much trouble falling asleep! At about ten p.m., particularly when we have guests, his head drops on his chest and twelve seconds later, he snores and wheezes like a St. Bernard. In self-defense, I have tied his shoe laces together. When he does get up, he wobbles, and once or twice, he’s fallen flat on his face. This, I hope, will make him try harder to stay awake.

When we go out, getting Jerry ready on time is a major concern. He has at least three outfits for each occasion—from baseball to yachting—and he usually tries them all on, plus complete changes of socks, shirts and what-not. And I wait, and wait, and wait.

I’ve tried to lay out his clothes for him (each time he decided on something else), sit outside in the car and honk (it doesn’t phase him), help him to dress. In desperation, I once changed my clothes fifteen times. That annoyed him so much that he actually tried to hurry up—for a while afterwards. But the only time he really got dressed quickly—on his own initiative—was on Tony Curtis’ and Janet Leigh’s wedding day. Although he had worked till 4:00 a.m. and was dead tired when I woke him, he was ready in five minutes.

I have always felt that, while a husband should certainly not take over a wife’s responsibilities, at least he should appreciate the effort that goes into them.

On Thursday and Sunday nights, our cook’s nights off, I usually take over the kitchen chores. No matter how broadly I hinted that Jerry try his hand, he just wasn’t having any. Then I resorted to a ruse which did get results—though not quite what I had hoped for.

When he came home one Thursday evening, I told him I didn’t feel well, and asked if he’d please try to fix something.

Jerry prepared a tuna salad with all the trimmings, fixed a tray with olives and celery, and heated up some rolls. He set a table that could have had a page in Better Homes and Gardens. The meal was excellent and a complete success. If I’d only left it at that! But no, I had to push my luck. “How about cleaning up?”

“Clean up?” His voice sounded a bit shrill. Then he caught himself again. “Sure. Love to, Patsy” . . . and he threw all the garbage under the sink.

He wasn’t much better at helping with the dishes. The easiest way out, he decided, was an automatic dishwasher. Well—I didn’t mind that!

Jerry had one habit which annoyed our guests as well as me. When they visited us for the first time, he would initiate them with “. . . come over to the pool, I want to show you something.” Then he’d shove them in, clothes and all.

Why it was up to me to break this habit, I don’t know. You would have thought some of his pals would have gotten even. But they didn’t. So one day, I pushed. He spluttered and shouted, not only because he got wet, but because I wouldn’t let him into the house for fifteen minutes afterward. “I’ll catch cold,” he yelled. (It was 92° that day!) “I don’t care,” I called back. I let him in when he promised to treat his friends as guests.

Of all the tasks, though, the most difficult was to make him drive carefully.

In the car, Jerry has no patience whatsoever. He races from stop-light to stoplight, thinks signs along the highway are for people to read who have nothing to talk about, and that the police get paid to argue with you.

To cure his speeding mania, I once threatened to get out of the car and walk. Jerry didn’t believe me, so I opened the car door. “Okay, Patsy, I’ll drive slowly!” He crawled along at fifteen miles an hour and asked, sweetly, “Now isn’t this the way you want me to drive, Patsy?”

Another time he threatened to get out. We were on our way to a drive-in movie with Janet and Tony, and Jerry had been his usual self behind the wheel. “Please, Jerry, I want to see the kids again. . . .”

Jerry was in a playful mood. “You’re nagging me too much, Patsy. I’ll get out and let you drive.” He stopped the car, jumped out, and sat on the sidewalk under the Street light. “Good by-y-ye, Patsy. . . .”

But he must have been somewhat impressed, for in the future, he drove a little more slowly.

Getting Jerry to do things, I found out after eight years of marriage, isn’t really too different from teaching my other two children, Gary and Ronnie. And often just as much fun.

(Dean Martin and Jerry Lewis are now in “The Stooge,” a Hal Wallis production for Paramount)