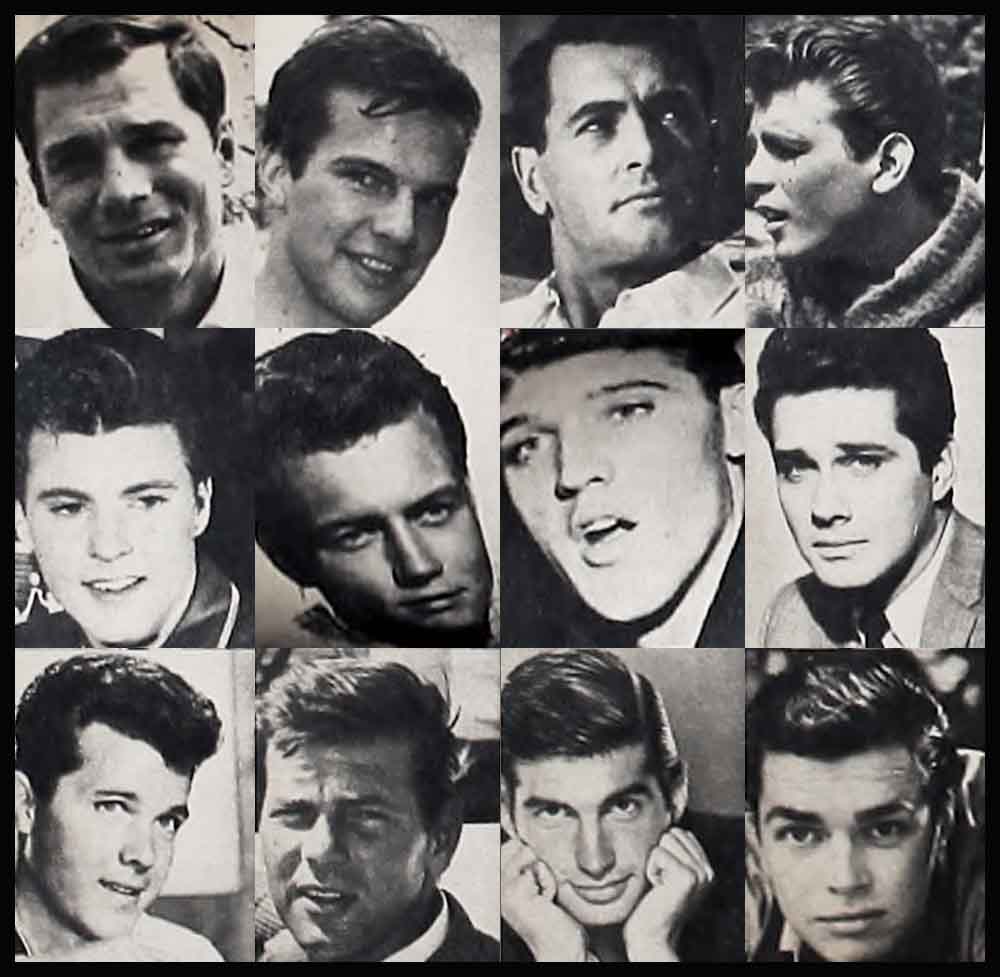 He’ll Hate You In The Morning

I’ll hate a girl in the morning if she tries to wear the pants at night. A girl should be a girl! She shouldn’t try to tell a guy what to do, what to wear, where to go and how to go there. Now I don’t mean a woman should spend the whole night agreeing with what a guy says just because he says it. If a girl did that I’d probably never call her again. Women should express their opinions—but like women, they shouldn’t come on like a ten-ton truck. These dames who right off the bat say they like this or that, take it or leave it— well, I’ll leave it but fast. And so would most guys.

Rude people bug me. Most girls are polite to me because I’m in snow business and this gives me some prestige. But I’ve noticed that some girls who are nice to me will be very rude to someone else. I watch girls to see how they act other people, and the two or three sets of manners aren’t my kind. I like a girl who is sweet and gracious to everybody. The girl who boasts about her popularity is insecure and makes me uncomfortable. I don’t like a phony, either. Sounds like I’m hard to please? Hardly. Most girls are dolls, and I love them.

The qualities I dislike in some women are generally the qualities I’d dislike in anybody! I resent the kind of bad manners that allow a person to ask personal questions. The woman who is loud, brash or overbearing has absolutely no appeal for me. The women I like are feminine, quiet and intelligent. I like women—people, in fact—who are well read, who have a variety of interests and can enjoy quiet leisure as well as a party. As a matter of fact, contrary to some reports, I enjoy people. I’ve heard myself called a hermit. Ridiculous! If I weren’t an actor, I’d rather be a hobo than a hermit, because a hobo meets all kinds.

Dorothy Parker said something about “don’t keep my memory fresh without me by telling other loves about me’’—or something like that. I can’t quote it exactly, but the thought sticks in my mind. Because it suggests a trait that will kill a girl with me right away. The girl who makes cracks about other people frightens me, too. If she’ll say catty things about her former friends (male or female), how do I know what she’ll say about me? Worse yet, how do I know what she won’t say about me? I like a girl who practices discretion—who thinks before she says or does things. I don’t think a boisterous woman is womanly. This seems to be my day for poetry, but another rhyme runs through my head about “sugar ’n spice ’n everything nice, that’s what little girls are made of.” Who could hate a girl like that—sweet and tempting—the morning after a date?

A date is a private affair. A boy and a girl go out together because they like each other—and not for publicity. A few times girls I enjoyed dating turned around and sold stories about our dates. And I’m left wondering if she ever really cared about me at all. A fellow feels pretty low when he realizes that her picture in a magazine means more to a girl than the good times they’ve had together. The things I say to a girl I mean just for her and not for the whole world, and I’d hope she feels the same way about the things she says to me. It deflates a man’s ego to find out he’s been nothing more than a publicity gimmick. Frankly, I don’t know any man who likes to have his ego deflated or who enjoys being with the girl who does it.

A man dislikes a girl who makes him dislike himself. And how much respect can he have for himself when he is dating a girl who is cheap? Attractive but cheap. You know the kind I mean ? Her skirt is too tight. Her neckline is too low. She turns around when you whistle. Anybody can get a date with her if she can squeeze him into her calendar. She gets plenty of dates but not many proposals. A man may take this girl out again and again—but every time, he likes her less and less and less. And dislikes himself more and more, because when he flatters her (he may even say he loves her), he knows he’s a liar. And when his friends see them together he’s embarrassed—he knows that they know his motives, too. He’s ashamed of himself and he blames her for that. So a guy ends up by hating himself—but not nearly so much as he hates her the morning after the night before.

The thing that would cause me to drop a girl fastest is so obvious that I’d think most any man would mention it first. If the girl isn’t interested in me—if she just plain doesn’t like me—I won’t beg her for dates. Sometimes I gey the feeling when I’m with a girl that she’s interested in Elvis Presley the performer—but not nearly as much in me. If I were still driving a truck in Memphis, she might not go out with me. When I get this feeling, I’m through with this girl. Do I have a yardstick for measuring a girl’s sincerity ? No, I don’t, and I’ll admit that I may occasionally misjudge somebody. But I’ve developed a pretty sound instinct about people. I’ve had to. Otherwise I would have been made a fool of plenty of times in the past few years. If I’ve ever misjudged a girl, I’m sorry. I know how it is to be misunderstood. It has certainly happened to me.

Do you know what I mean when I say “professional virgin?’’ Every man has met her at least once, and most men dislike her. Men respect a genuinely nice girl and are proud to take her out. But the girl who wears her virtue like a neon sign is a little ridiculous. The worst kind is the girl who look and acts approachable—then takes mortal offense if she is approached. She invites a man to make advances, and if he does, she freezes him with an outraged, “Sir, I’ll have you know I’m a lady.” Then she tells her friends he is a cad and a lecher. Not quite so bad, but in the same class, is the girl who obviously thinks all men are evil creatures on the prowl for pure young girls (of whom she is the purest of the lot). But she expects her date to try and kiss her. She’s insulted if he does or if he doesn’t. What do I do with a girl like that? I know that I, for one, will hate her in the morning—so I leave her alone at night.

I like brunettes, redheads and blondes—just so they’re girls. I like them short, tall, willowy or curvy. In general, girls gas me. But there are some girls who really turn me off, and they are the whines. You know—the type that stars every conversation with. “Well, it’s about time you got around to calling me” Right away I begin wondering if the operator will return my dime. I had a date with one Plaintive Polly a few months ago. All the way to the restaurant, she kept up a wailing account of how the hairdresser had botched her hair. With the soup I had a dissertation on how many spike heels had broken on her lately. (Small wonder, she was weighed down with woe.) With salad I heard about her awful, nagging mother. But for the entree I got the real treatment—a drawn-out story about the thoughtlessness of men. By the time we got to the dessert I was so depressed I tipped the piano-player a dollar to give us a tune—“Slaughter on Tenth Avenue.” Wonder what Dr. Freud would have made of that particular choice!

When I was in college, I’d call a girl one night to ask for a date the next, and she’d turn me down. She didn’t have a date for the next night and I knew it. She wanted to go out with me, I knew that, too. But because her crowd had a code that a girl shouldn’t accept a date on one-night’s notice, she’d turn me down. She didn’t have enough individuality to do what she wanted to do. She had to go along with the crowd. Any girl who has to go along with a crowd loses me fast. Some of the phoniest girls I’ve ever met were in college with me. Working girls have more respect for a man. They aren’t so bound by fetishes and a false set of standards. I also can’t stand a girl who tries to completely change me. I’m like I am, and I don’t want any woman trying to remake me or my personality. Women in this country are bossy enough as it is. What kind of a girl would I hate in the morning? That’s easy —phony girls and bossy women. They’re not for me! And they never will be!

How can a man tell a girl she’s a honey, adorable, wonderful—if she already thinks so? A smart girl tells the man he’s wonderful. Then he knows she’s a great gal—no matter what she’s like. Don’t ever believe the line that flattery will get you nowhere, that it’s old-fashioned. When flattery goes out of style, so will men and women. He’ll love you for telling him he’s great. It’s sad that so many women today have become completely self-reliant. It’s unnatural. It’s probably our own fault—but no man wants to be reminded that he has abdicated from the role nature cast him in. So when he meets an aggressive girl, he feels guilty. And if he feels guilty, he can’t enjoy being with that girl. I don’t like a self-centered girl or one who wants to be boss. She makes a fellow feel like less of a man. I’m still a man and will act like one. And when I’m with a girl I want her to act like a woman.

If a girl is considerate, it’s a magic formula—everything else seems to work out. A man has to he considerate, too, but first of all he has to be a man, he has to live by his lights. A girl should be more flexible and understanding. I remember when I was going to North Hollywood High School. There was a girl I wanted to take to a dance. I didn’t have a car, but my father offered to drive us. She had been friendly and pleasant, but I felt a chilliness set in when I explained I wouldn’t be driving her. She gave me an evasive answer as to whether she would accept my invitation, and she ended up going with a fellow who not only had his own car, but a flashy one. Later that fellow transferred to another school. When the girl sort of came back to me, I sort of “wasn’t there.” I knew by then that she had the wrong sense of values, at least for me. Now that I’m older I still think that consideration means considering what a man is like—not what he has. A considerate girl is the last person a fellow would “hate in the morning.”