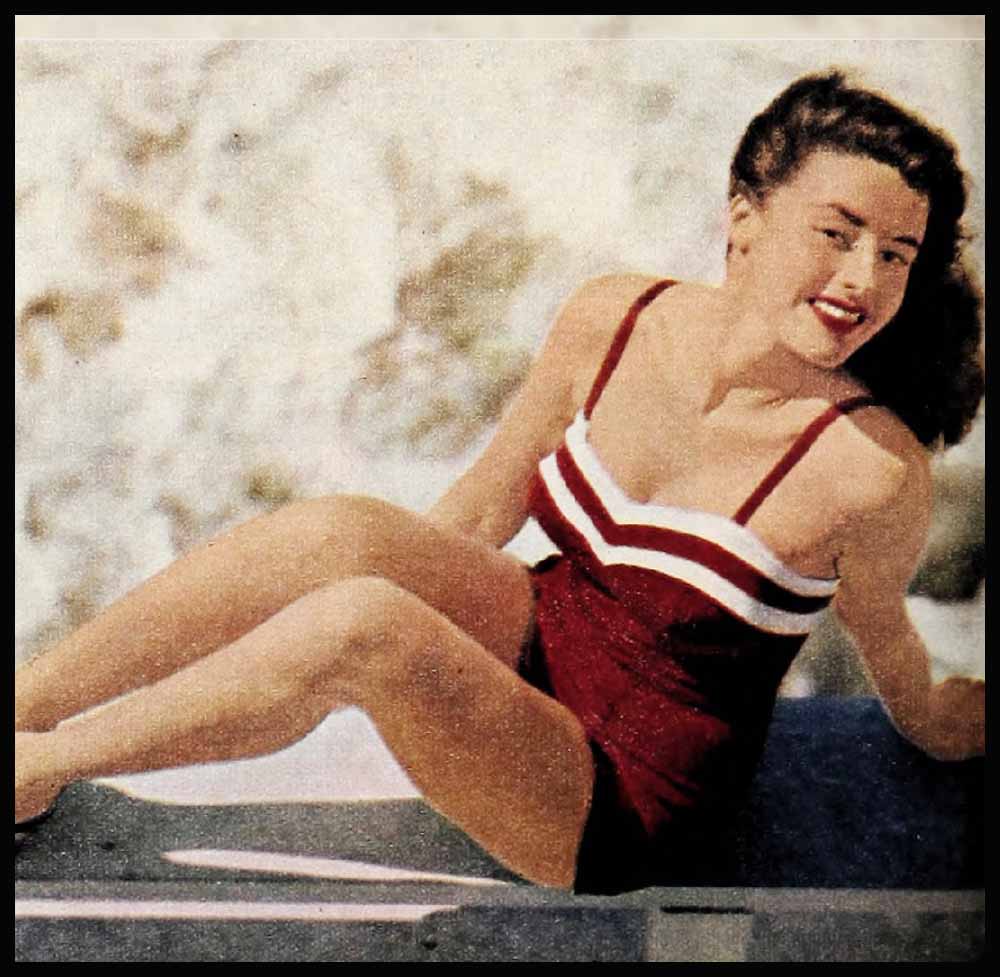 A day to remember at the Palm Springs Racquet Club was the day Janet Leigh came down for a brief vacation between pictures and graced the giant pool with her imposing form. The whistles could be heard coming from all directions—although the rumor is, the loudest were from husband Tony. And no wonder, he was the one (lucky man) who gifted Janet with her tame flame pink lastex swimsuit that caused such a run on pink suits in the vicinity. Because Mr. Curtis is partial to one-piece swim wear with straps, that’s the kind his loving wife always wears. Incidentally, Janet’s one of the busiest of Hollywood’s young lovelies. She’s just finished “My Sister Eileen,” and goes right into Jack Webb’s “Pete Kelly’s Blues.” No wonder this month’s Photoplay cover girl took a rest.

The one thing the young newlyweds, Mitzi Gaynor and Jack Bean, are searching for while house-hunting is a pool. And it will be worth all the trouble for a pool is central social headquarters for all activity for the Beans and friends. Swimming is Mitzi’s favorite way of keeping her 5‘ 6“ frame down to its trim 112. As you can see, Mitzi favors bloomer suits—and bloomer suits favor Mitzi!

Ever since “From Here to Eternity,” fans and friends have been noticing a new blossoming in Donna Reed, gaining her a reputation of not only being one of Hollywood’s top dramatic actresses but also one of the colony’s loveliest glamour girls. For years, Donna nixed all pinup pictures. which was Hollywood’s loss, judging from the fanfare she received when she showed up at the Hotel Del Capri in Westwood recently in a black and white “Dalmatian” suit. Everyone had spots and a star before their eyes.

Not everybody has to go in the water. feels Mona Freeman. who spent the day at the Hotel Del Capri and not once got her feet wet. But Mona had lots of fun watching the others, and the others had lots of fun watching Mona. She had a Golden Earrings hat on that was white and red with a wide, wide sun-shading brim, smooth-fitting black knee pants and a fiery print shirt. Mona, incidentally, is still Bing Crosby’s number-one gal.

Elaine Stewart is one lass who will never be caught near a pool! Elaine likes the ocean—so much so this smart young one bought herself a small bungalow at Malibu. At the present. though, Elaine’s not doing much water-wading; she’s still recuperating from the ruptured appendix that sent her to the hospital during a recent good-will tour to Rio de Janeiro.

Of all places, Robert Wagner spent his twenty-fifth birthday in a lonely hotel room in Wichita, Kansas! Near-zero weather grounded all planes and Bob, tub-thumping for “White Feather,” not only missed three parties in his honor, he couldn’t even get through to friends or family on the telephone. Facing casting problems, Bob’s “Lord Vanity” doesn’t start now until June, so his parents wanted him to accompany them to Europe and it was okay with his studio—but not Bob! He loves his work, Hollywood and the many friends he’s made here. He preferred to remain close to home!

Lovely Anna Maria Alberghetti is now allowed to have unchaperoned escorts and Ben Cooper is her number-one choice. On their first date the captivating couple went to Ciro’s for ice cream!

It’s the Truth: That Jane Powell’s congratulatory wire wasn’t the first to reach former husband Geary Steffen when he married singer Anne Salva! . . . That Audrey Hepburn and Mel Ferrer finally decided it’s much wiser to wait until they’ve been married longer, before merging as a professional team. . . That Dale Robertson is impatient for his freedom and anxious to marry Mary Murphy (she’s weary of waiting!), which is why he filed a cross complaint to his wife’s year-old divorce action. . . . That neither Vera-Ellen or Mitzi Gaynor are expecting the stork and their studios are that relieved!

Talented Tourists: As a surprise for Doris Day, one of those dreamy little cars will be waiting at the dock when she arrives in Europe. Marty Melcher even had it painted Doris’ favorite powder blue . . . . And if Tony Curtis can arrange it, when Janet Leigh finishes “Pete Kelly’s Blues,” they’ll take a long trip. Cary Grant gave Tony the name of a slow freighter that only accommodates a handful of passengers. No one has to make polite conversation or dress for dinner. And there are no daily gossip columns to curdle the coffee—this Tony likes best of all!

Personal to Texas: No, you weren’t seeing double! That was Rock Hudson who went along for the ride with director George Stevens who was scouting “Giant” locations—and incidentally, getting better acquainted with his star. Speaking of el Rocko, when U-I sent him to the Chicago premiere of “Captain Lightfoot” recently, he wired fan-club president Myron Welge in Missouri (they had never met) and invited him to Chicago. Rock entertained Myron and thirty club members backstage. Back in Hollywood he considerately confided to Cal: “I met a wonderful group of people, but one girl worried me. Her camera wouldn’t work and she was so disappointed. Of course I didn’t mind, but on my next trip I’ll pose for her specially!” No wonder Hudson rolls along so successfully!

Silver Lining: Rory Calhoun is a happy man! He now has everything, including peace of mind. But by sad and strange coincidence he punished himself unnecessarily for years. It wasn’t generally known that Francis Timothy Durgin got into scrapes that landed him in reform school. There were contributing circumstances, and although the callow youth grew into an exemplary citizen, helping countless unfortunates along the way, he still had a guilt complex about his past. Many Hollywood reporters (including Cal) knew Rory’s story, but respecting his sensitivity, kept silent. Now comes the blessing in disguise! One of those “expose” magazines has told all. In so doing, instead of hurting Rory, they’ve actually released him from fear and the nice, deserving guy never has to worry again!

Did You Know: That Jean Simmons and Stewart Granger exchange weekly diaries while he’s in India making “Bhowani Junction” and she’s in Hollywood in “Guys and Dolls”? . . . That Tab Hunter hasn’t missed a Sunday morning in church since his sixteenth birthday? It’s a fact.

It is a quote. PHOTOPLAY MAGAZINE JUNE 1955