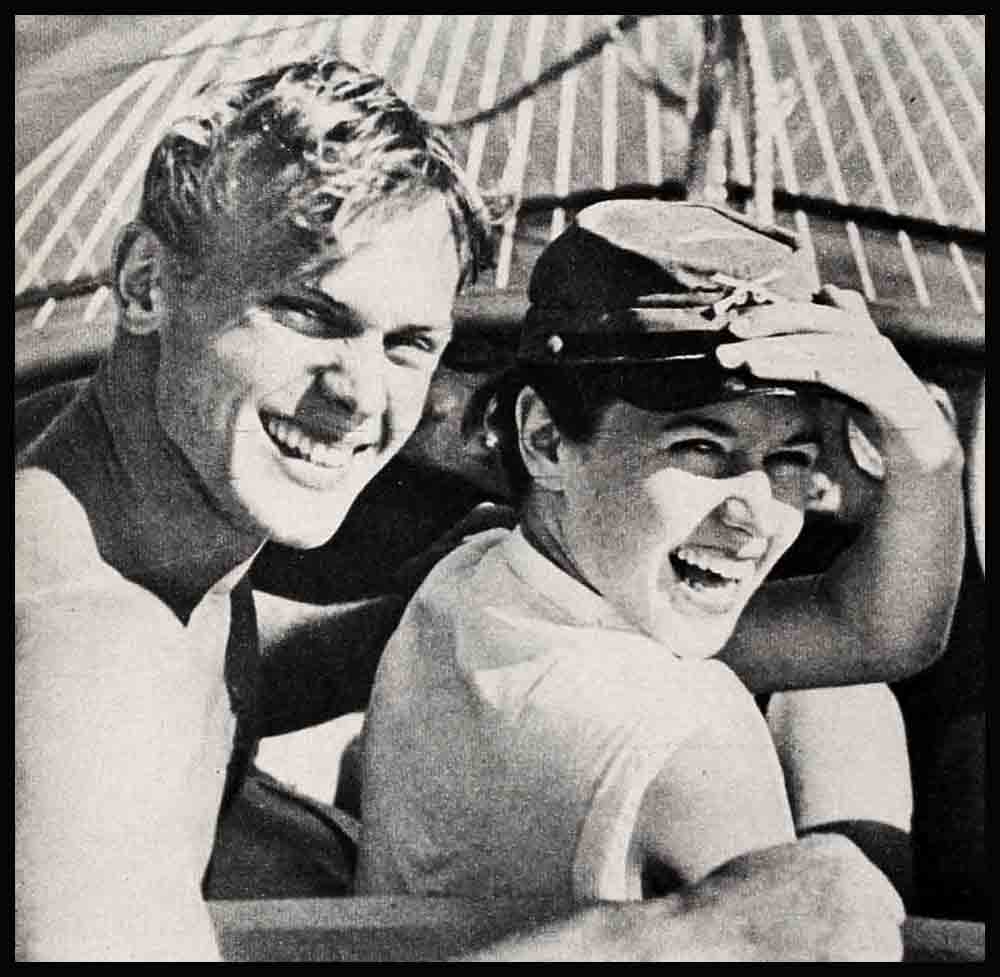 There was once a little girl named Pat Crowley, who, like a lot of other little girls all over the world, had dreams that one day she would grow up to become a famous actress. But the difference between Pat and most girls is that once the dream had taken hold, she never allowed herself to waver from it for a moment. With some subtle little girl’s intuition, she knew that her dream could come true, but only if she made it happen for herself.

These days, they’re calling Pat Crowley the new Cinderella girl. In a nation- wide talent search, Paramount chose her over 749 other young actresses for a top role in “Forever Female.” She was signed to a long-term contract and rushed into two other pictures. And now the word that’s going around Hollywood is that as soon as her three movies are released, Pat Crowley will be a star.

Studios are always predicting stardom for some promising newcomer, but the public has a way of upsetting predictions. Pat’s being given the star buildup, but her position is as temporary as her living quarters. No fancy hotel suites! No palatial mansion! She lives in a small furnished apartment just outside Westwood, and while there’s a swimming pool—it’s shared by twenty other families in the building. If this is Cinderella, it’s Cinderella before the ball begins. The Prince has discovered Pat, and he has just asked her to dance. There’s no guarantee at all that the glass slipper will fit. For just as no one could make the Prince love Cinderella, so—nothing can make an audience take Pat to its heart. The American public is King. It follows its own whims, chooses its own favorites.

In Pat’s case, however, the public itself was doing some predicting. In the “Choose Your Stars” ballot. Photoplay readers had awarded her second place as the young actress most likely to achieve stardom. What made the vote really startling was this: Photoplay readers hadn’t seen any of her movies yet. Some had caught the movie trailer of “Forever Female,” some remembered her as the young Judy in TV’s “A Date With Judy”—but mostly, all readers had to go by was a little black-and-white photograph of a winsome, twenty-year-old brunette with a disarmingly fresh face, a Mona Lisa smile, and eyes so big, so bright—they somehow broke your heart.

“I’m very grateful to the readers of Photoplay,” says Pat, “for nominating me among the top ten in the ‘Choose Your Stars’ ballot. And to Photoplay itself for this, my first interview with a movie magazine.”

Pat is a girl who looks as though everything must be happening to her for the first time, and as though everything that happens is fun. It’s easy to understand why she was chosen for the part of the pert, young actress in “Forever Female.” It wasn’t merely a matter of Paramount’s wanting a fresh, new screen personality. Paramount needed a girl who could also act, holding her own against a brace of top Hollywood stars. She not only had to be convincing as Ginger Roger’s rival for the lead in a Broadway play, but she had to be believable as her rival for William Holden’s affections. Winning the coveted role was a tremendous break for Pat, but a break she has been preparing herself for ever since she was thirteen.

The new Cinderella of the screen has worked as hard as the Cinderella of legend, only Pat wasn’t drudging in any kitchen, scouring pots and pans—she was out in the world, struggling for a place in the theatre, practicing and studying to learn the technique of her trade. There’s another difference too. Pat doesn’t have three older sisters, all homely; she has only one—and Ann Crowley is beautiful.

“I was born in Olyphant, Pennsylvania, just outside Scranton,” Pat tells it, giving the date without hesitation—“September 17, 1934. But living really started because of Ann. She has a lovely voice, and one day she talked mother into letting her go to New York to study singing. No one in the family had ever been in showbusiness, and we didn’t think much would ever come of the trip. Were we wrong!” Ann became an accomplished singer, dancer and actress, playing lead roles in such Broadway musicals as “Oklahoma,” “Miss Liberty,” “Seventeen,” and “Paint Your Wagon.”

“I was eleven when I got my first job. Thanks to Ann, I became a model.”

Pat made her professional stage debut at the age of thirteen. Ann was playing a leading role in the Chicago company of “Carousel,” and talked the stage manager into giving her young sister a part in the musical. It was summer vacation, and Pat rushed to Chicago.

She recalls her debut delightedly. “I was in the opening scene. It’s all in pantomime, while the orchestra plays the ‘Carousel Waltz.’ Well, I was the little girl with streamers on my hat and a big balloon—riding a horse on the merry-go-round.”

From then on, Pat tried to spend every vacation in the theatre. She was Sarah Churchill’s “kid sister” in a stock company presentation of “The Philadelphia Story.” She played in summer theatres at Fayetteville, New York, and Westport, Connecticut and in TV.

In 1950, a few weeks after graduating high school, she tried out for her first Broadway play and got the part—the ingenue lead opposite Cameron Mitchell in “Southern Exposure.” The play ran only two-and-half weeks, but Pat won a Theater World Award as “one of the most promising new personalities on Broadway.” But theatre jobs were scarce, even for young actresses with good notices. Pat began playing small roles in television, scored a hit in a Kraft Playhouse show, then won leads in several other top TV programs.

Her second Broadway play was Otto Preminger’s “4 Twelves Are 48.” “We played three weeks on the road. Then we came to New York.” Pat laughs. “We lasted two nights.”

It was back to television! In 1951, she was selected for the title role in “A Date With Judy.” “My first long run,” Pat says happily. “It lasted thirty-nine weeks, then the series went off the air.” She returned to the stage for a Broadway revival of “Tovarich,” then went to Seacliff, Long Island, for a summer stock version of “My Sister Eileen,” with Patsy Kelly.

“I was back in New York,” this, Pat will never forget, “rehearsing for a television show, when I got the call from Paramount’s New York talent office. They had seen me in ‘Southern Exposure’ and wanted me to try for the part in ‘Forever Female.’ Could I come over. Could I?”

Two hundred and fifty actresses had al- ready been auditioned in Hollywood. In New York, there were another five hundred. But Pat was one of the three actresses flown to Hollywood for screen tests.

“Before getting Paramount’s decision as to which of us it would be, we had a free weekend, so we all went to Mexico together. The three of us became wonderful friends. We slept in a motel, went to a bullfight, visited beaches, did a lot of sightseeing. Along the way, we passed a wishing well. We threw in pennies and each made a wish—the same. One.”

She made “Forever Female,” and then came the ordeal of the preview, with the audience asked to write its comments on cards after seeing the picture. One hundred and forty cards were filled out. Normally, five favorable comments is considered good for a newcomer. Pat got forty.

Paramount immediately gave her leading roles in “Money From Home,” starring Dean Martin and Jerry Lewis, and in “Red Garters,” with Guy Mitchell and Rosemary Clooney. And now, she was about to set out on a personal-appearance tour of thirty-five key cities, introducing herself as well as her first picture to audiences across the nation. Her future in Hollywood depended upon public reaction. Tomorrow, a new star might be born, but today—Pat was in that awkward stage of waiting.

As far as Pat’s concerned, everything that has happened so far “is all a little fantastic and frightening.” But she’s too busy living today—taking things as they come and making the most of them—to worry about tomorrow. One day, she’d like to get married and have children. One day, she’d like to make up for her two Broadway flops by appearing in a hit play.

At present, she has no steady beaux, no romantic interests.

Yes, but whom does she go out with?

“No one in particular.”

While there’s no romance in her life—yet, and nothing anyone could call “serious” dating, Pat is definitely part of the film colony’s younger set. She spends a fair amount of time with Tab Hunter and his crowd.

“One day Tab called,” she recalls smilingly, “to say he and some of his pals were going to Lake Arrowhead. Would I join them? You know Tab—he’s an awfully smooth talker. I went.” She laughs, enjoying the joke—even though it was on herself. “I thought it would be like back home in Pennsylvania. There’s a lake there we used to go to. You know—swimming, beach picnics, maybe roast some hot dogs over a fire. It wasn’t till we got to Lake Arrowhead that I found out—Tab was taking me water-skiing. I’d never been on skis before. I was scared stiff. Well, I went through with it, but—never again!” She was positive on this subject, as she has been on almost everything in her life.

When Paramount decided to change her name, for instance, for fear the public might mistake her for a man, Pat protested that “No one has ever had that problem yet.” Three gossip columns and two news magazines agreed with her. Nevertheless, a list of a hundred and fifty new names was put on a ballot and distributed to Paramount employees with the question: “Which name do you prefer for Pat Crowley?”

The name that won? Pat Crowley!

Everyone seems to want Pat Crowley to be herself. She’s a normal, healthy, honest human being. If people feel protective about her, it’s because she’s so completely without guile—a seeming babe let loose in the Hollywood wilds. She’s still the little girl on the merry-go-round—streamers on her hat, a balloon in her hand—and the merry-go-round’s been spinning faster and faster since she first mounted it in “Carousel” just seven years ago. There’s a natural tendency to reach up to hold her on the horse.

But Pat won’t have it. It would only spoil the fun. Besides, she’s a big girl now. She won’t fall off. Pat has a fine sense of balance and a firm grip on the reins. What’s more, those hazel eyes see with amazing clarity for a girl of twenty. Pat’s quite likely to catch the brass ring.