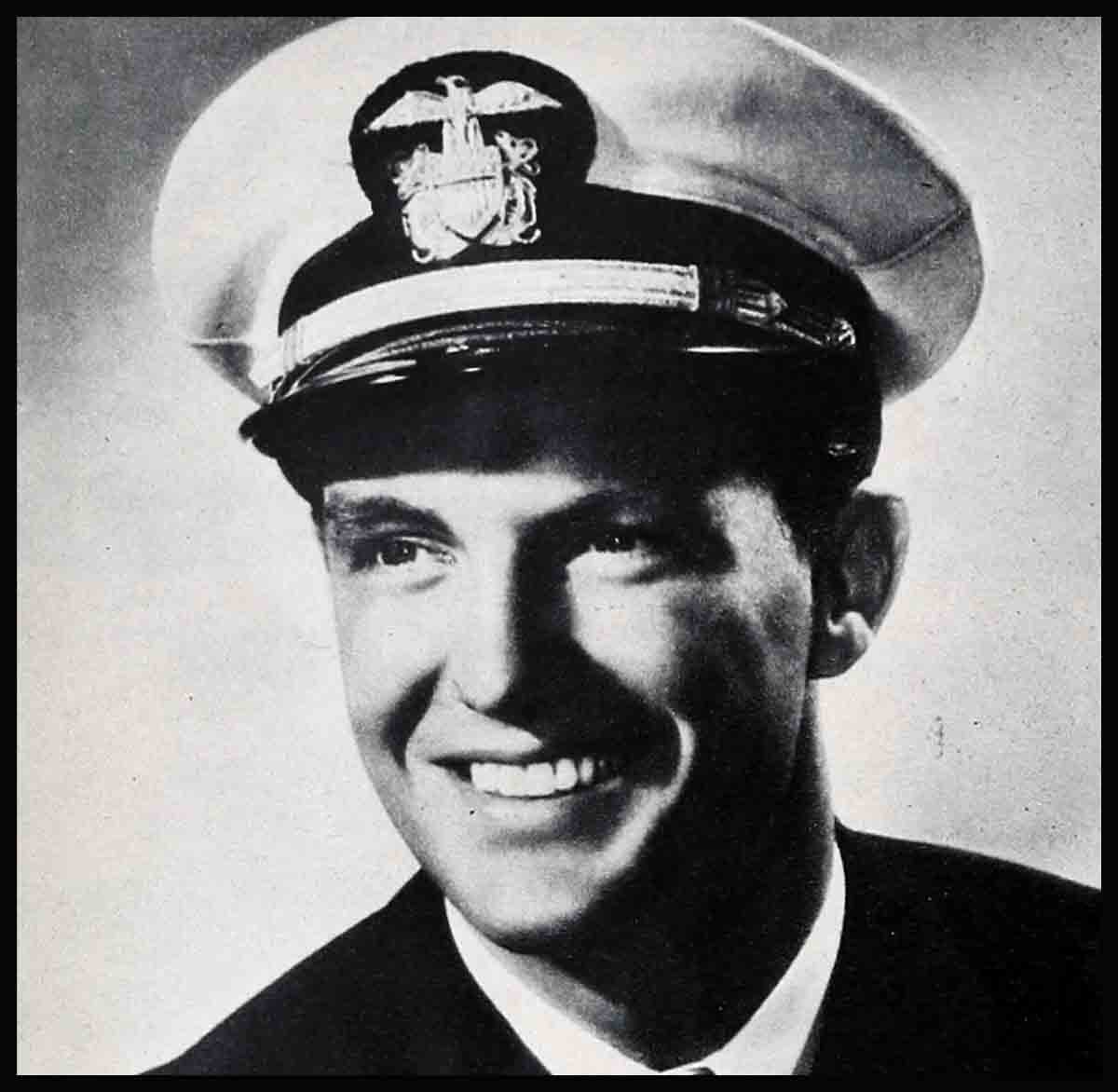 The Case Of The Missing Phonograph—Robert Stack

Somewhere drifting around the United States loose is the meanest man in the world. Can any punishment be rugged enough for a scoundrel who’d . . . but let’s start at the beginning.

It was one of those sun-drenched golden days that California boasts of and sometimes experiences. The big rambling house in the heart of Los Angeles with its semi-tropical flowers and trees, its oval blue swimming pool and enclosed badminton court basked in the radiance of Old Sol.

Bob’s mother was at the phone in a jiffy. With Bob now a Navy lieutenant (j.g.) in the Pacific area, a wire mightmean—

Betzi Stack’s heart raced with excitement as she listened to the rest of the message—a San Francisco address where the phonograph-radio was to be shipped was given, and Bob’s name at the end.

For a fleeting moment something seemed odd to Bob’s mother. His last letter hadn’t breathed a hint about any prospect or hope of homecoming. He certainly had not expected to get a leave for at least eighteen months. . . . Let’s see, where was that letter? “Dear Mother—

“The weather has closed in here for the past few days, so no air mail has been coming through at all. I never realized how important mail call was till no letters arrived.

“The stories you hear about the importance of mail are understatements. And letters are read over and over again. Good news or bad. So don’t think daily chatter from home isn’t welcome—nothing’s too inconsequential to write about. Just so long as it’s not the wrong kind of news. That’s really tough on a guy!

“Out here you even get sentimental over remembering some of your worst civilian gripes. And wonder what you were griping about. You were home, weren’t you? You didn’t just dream it.

“But seriously, I am getting a great bang out of my experience here and with a crew as swell as mine. I’ve got no complaints, believe me.

“Today was the payoff. I’d taken over the reins as O. in C. (Officer in Command) of firing and, with some qualms as to how the crew would take it, had substituted a few new ideas. Anyway, today the crew presented me with full lieutenant’s bars and shoulder-boards and a swell note saying they hoped I could use them soon. It hit me hard to find they thought well of me.”

Certainly no whisper about an anticipated return! But with nine men of the family in that branch of the service, Betzi well knew things can happen fast and unexpectedly in the Navy.

Even though the wire didn’t sound like Bob, it was like him to want his phonograph on hand the minute he arrived. Bob and music were inseparable. As inseparable as his exuberance and his smile. And talk about singing in the bathtub—!

Bob’s mother laid the letter aside. No time now to muse over it. The phonograph, the valuable, beautiful phonograph-radio, Bob’s pride and joy, had to be crated and expressed to San Francisco—and pronto.

That done, even the house seemed filled with anticipation of Bob’s return. In every room his trophies, won in shooting, polo, motorboat and automobile racing, brought back memories.

It was Bob’s prowess in shooting which had qualified him for his position as an expert in his military service. As he had written: “For the first time in my life I shot well yesterday when I wanted to show off! We rigged up a little shooting tournament. Seems my reputation had preceded me here, and there were plenty of skeptics. Brother, I was lucky. I shot 100 out of 100. If I had fouled up I would have shot myself!

“ ‘Men Of Texas’ and ‘Eagle Squadron’ both have had a showing down here. Nobody knew who I was till these two pics arrived and they tied me up with them.

“I’m glad my clothes are in good shape, it will feel mighty good to get back in a sport coat and moccasins when this rat-race is over even if I do have an aroma of mothballs. I only pray my picture career won’t smell of the mothballs it’s been in! The new guys are so darn good that it kind of scares you. I saw ‘A Guy Named Joe’ the other night and Johnson was so good I feel like writing him a note and telling him about it.

“Today I turned on ‘Command Performance,’ the short-wave broadcast of the Armed Forces Radio Service. Great show. By the time Judy Garland sang ‘Holy Night,’ I was bawling like a kid.

“We’ve taken to wild pig hunting out this way now. So far we’ve shot a couple, but we usually end up with sore feet instead of pork chops.

“By the way, the chaplain of the station called me up a few days ago and asked me to introduce the Betty Hutton show playing the Pacific area. I was afraid Betty wouldn’t remember me, but when she saw me she threw her arms around me and now my fellow officers hold me in high esteem.

“The movie gang seems to be moving through this part of the country. Lief Erickson, Vaughn Paul, Walter Brooks, Ensign Dennis Day were here, putting on a show for the Navy with Tommy Riggs and Betty Lou, Claude Thornhill and Bob Crosby. Jackie Cooper went through, too.

“It was swell to see them all. The Martha O’Driscoll show was here and she’ll call you when she gets back. She’s a swell gal.”

As the days passed, Betzi grabbed every phone call on the first ring. She couldn’t understand why Bob hadn’t made a beeline to a telephone the minute the boat docked.

At last came a call from Western Union. Betzi held her breath as she listened. “Orders changed,” the Western Union operator read the message, “Sailing Sunday. Thanks for the radio, makes company on ship. Love. Bob.”

Sailing Sunday! But the message was preposterous. Bob, of all people, wiring—‘Sailing Sunday.’ Now Betzi knew something was wrong. No Navy officer would send such a wire. Sailings are military secrets. Bob certainly had not sent that wire. Suddenly she knew, as well, that Bob had not sent the first one, either.

Then who and why? Why would anyone sign Bob’s name to a fake message? What—oh, was it possible, could it be that the wires were sent to get hold of Bob’s expensive phonograph? Of course! That was it!

The subsequent investigation proved Betzi right. The clever embezzler obviously sent the first wire to obtain the machine, the second to delay investigation.

Bob took the loss of his phonograph philosophically. He wrote:

“I’m so mad at that guy I could murder him—to let you expect me home and then find out I’m still out here! And you would worry about the loss of the radio! Skip it, baby. I’ll get a new one after the war. I’m thankful things are going as well as they are for all of us. Behave yourself and forget about the radio.

“It’s hard to believe I’ve been away eighteen months. I don’t hold with any hope that the little brown men will be brushed off in a hurry. We’ve got a lot of work to do yet. Behave yourself and don’t worry about me.