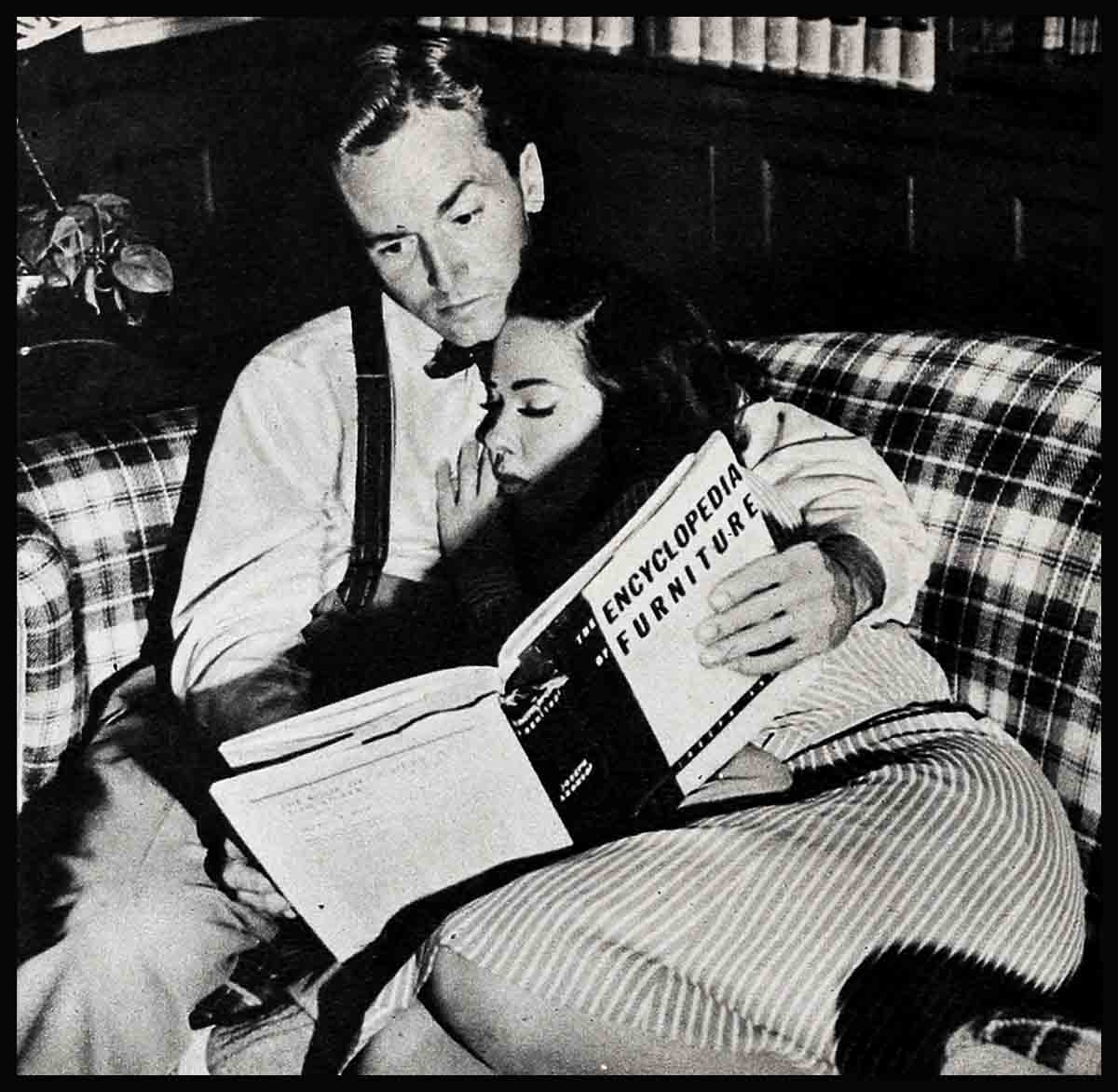 Katie And Johnnie Are Sweethearts

Love Katie,” says Johnnie Johnston, speaking to I me but looking at Kathryn Grayson.

“I love Johnnie,” says Kathryn Grayson and she looks at Johnnie and he looks at her. Then he kisses her and I feel I should leave but I need a few more details so I stick around until things are back to normal, more or less.

We are in the large cathedral-like living room of Kathryn’s new fifteen-room house in Brentwood, and Johnnie’s four-and-a-half-year-old daughter Julie is pretending to play the big organ. She says she is playing the wedding march. Kathryn laughs and says, “A friend of mine at the studio has been practicing the wedding march to play at our wedding.”

Then, of course, I have to ask, “When are you two getting married?” and Kathryn replies, “On December 13. We’d like to be married right here in this living room; it would make a lovely room for a wedding, if only we had some furniture in it.” But because the marriage was decided upon in such a hurry, after Johnnie went to Las Vegas to divorce his wife Dorothy, they will now be married in a church—probably the Congregational Church in Westwood, Los Angeles. And I think that pretty little Kate with her dark hair and. dark eyes and sweet face, and her blond, blue-eyed Johnnie will make a very handsome couple.

“You see,” says Johnnie explaining the rush, “after five months of negotiating the financial settlement with my wife Dorothy she finally divorced me in California last July, and it takes a year for that divorce to be final and that was too long for us both to wait. So decided to divorce Dorothy in Las Vegas. You see, Kathryn and I are going on a concert tour right away and it is better for us to be married and then we can be together all the time.”

Miss Grayson obtained a Nevada divorce from John Shelton in June, 1946, after four and a half years of marriage and thirteen reconciliations! But there seem to be no doubts in Kathryn’s mind this time that her new marriage will be a success. “I have a great desire,” Katie says earnestly, “to prove that in this town a marriage between show people can really work.”

“We’ve decided,” interrupts Johnnie, “that it’s being apart from one another that breaks up show-business marriages. So when either of us goes out of town, we’ll both go. We’ve decided not to be kept apart by our profession and we figure we can make enough money and stay in the same town. So from now on if anyone wants to hire one of us, they have to hire both of us.”

“You see,” continues Katie, recollection in her eyes, “when people who love each other are apart, jealousy is so apt to set in.” But since this chat, Katie and Johnnie have had to change their plans. He couldn’t come to a satisfactory agreement with his former wife, which means the wedding is postponed until August 14. But they’ll go on their singing tour together. After all, as Katie says, “I’d wait forever for Johnnie.”

Fortunately for Kathryn’s and Johnnie’s plan to “be together,” their chief commercial asset—apart from good looks—is that they both have fine singing voices. “And every year,” Johnnie says, “Katie and I will go together on a singing tour of the country. I’ll play the theaters and Katie will sing in concert halls.” Their current joint personal appearance tour takes them to theaters in Chicago, Boston, Philadelphia, Washington, New York and San Francisco, playing two weeks in each city. And it is a wonderful idea for Johnnie and Kathryn and the paying customers.

“And Joe Pasternak,” says Kathryn, “has promised to star Johnnie with me in a musical at Metro.” Johnnie completed his first starring film at Metro, “This Time for Keeps,” with Esther Williams and Jimmy Durante in November. Both stars predict a big screen future for young Mr. Johnston, who was previously at Paramount where he played in “B” pictures and where he achieved some small fame for singing “Black Magic.”

“How did you meet?” is the next question, of course. Johnnie is quick to answer, “We met in January, 1946, when we had to sing a duet in ‘Till the Clouds Roll By.’ But, Katie was still married and living then with Shelton and during her marriage, she never did go out with another man. But she separated from Shelton in March and after that I asked her to play golf. She said she would and I found out she has a wonderful swing and she’s much stronger than she looks.”

“Yes,” interrupts Katie, “but Johnnie’s the golfer in our family. He has a handicap of three, and don’t ask what mine is because I haven’t one!”

“Where are you planning to live?”

“Well, that’s a problem,” says Johnnie. “You see Kathryn’s only just bought this house.” Which is obvious since the big mansion is only half furnished. There are no rugs and no drapes or curtains.

“So it seems to me,” continues Johnnie, “that instead of asking Katie to sell this house, it would make more sense if she added up how much it has cost her and I pay for half of it, and then we can both live here after we’re married.

“When we’re married,” adds Johnnie, “I’m giving my own house to my mother.”

After her divorce Kathryn lived alone (and didn’t like it) except for a huge St. Bernard dog called Throckmorton, her housekeeper, cook, the housekeeper’s little girl and occasional visits from Johnnie’s daughter Julie.

“We want lots of children of our own,” Kathryn says. “To be exact, we want four children, two handsome boys and two beautiful and intelligent girls.

“I see no reason why you can’t have a career and raise a family,” continues the singing actress. “Of course,” she admits, “four children might slow me up a bit, but it can be done. Look at Jane Wyman. She has two children and a career. I simply love children and all my relatives have large families. And we’re also looking forward to visits from Johnnie’s two children.” In addition to Julie Johnston there’s a little boy Denny, a year old.

If there is one thing that Kathryn loves better than her Johnnie and her future children, it’s food. “I never saw anyone eat the way she does,” says the man who loves her. “I don’t know how she keeps from weighing two hundred pounds. She only weighs a hundred and eighteen pounds but she eats more than I do!”

Johnnie is on the thin side, weighing in at one hundred and fifty-six pounds. “And Katie’s a good cook,” he adds. “She cooks for us both on the cook’s night out on Thursdays, and whenever she has a dinner party at home, she rushes home from the studio to fix things up and put on the finishing touches.”

If you look inside the local bowling alleys, you’ll find them at least once a week making with the ninepins. And this is another game Johnnie’s good at. He should be—for twenty-five years his mother, Leona Robinson, has been a champion bowler. Johnnie is setting her up in business with a bowling alley.

He’s a good boy, this Johnnie Johnston. No wonder Kathryn is so crazy about him. In addition to helping his mother with the bowling club, he has also set up his stepfather in the boxmaking business.

“Johnnie’s the sweetest man in the world,” says his future bride. “You know,” she confides, “before I started going with him seriously, I decided to meet his wife and find out about her attitude towards him because when there is a break in a marriage, I’m usually on the wife’s side. Well, Dorothy and I are good friends now, better friends than she is with Johnnie, if you know what I mean, but after meeting her I realized that whatever caused their break would not happen with us.”

Kathryn is honest enough to admit that she and Johnnie do have an occasional argument. “But it’s only when we are tired at the end of a long day at the studio. It’s never anything serious.”

“We play a game of gin rummy every day,” Johnnie adds, “to see who’s the boss for the day.” Listening to them, it’s hard to say who is boss. They have a good give-and-take relationship. And they are vitally interested in each other’s career.

“I respect Johnnie’s opinion as a singer very much,” says the star songstress. Very often in the sound recording stage at the studio you’ll find them in a huddle over which parts of the recordings from Kathryn’s latest movies are good and which are bad. They do the same for Johnnie’s.

And Johnnie, who is rather on the gentle side, is very proud of Katie’s Irish ability to fight for her rights. “I wish you could have seen her telling them why she didn’t like a certain song. She’s not afraid of anybody, even Louis B. Mayer!”

But Kathryn, for all her determination and fire, is a kind person, and it’s cute to see how she goes out of her way to help little Jane Powell who is exactly the age Katie was when she first came to Metro. “The best test of all to find out about a person,” says Johnnie, “comes from the people who work with her. The crew just loves Katie, and they know.”

As for the honeymoon, Katie says, “We’ll go to Tahoe for a week or so first.”

“We really want to go to Niagara Falls,” says Johnnie. “But we’ll settle for seeing America first—on our concert tour—and after that we’ll go to England and South America.”

Good luck to you both on your singing-honeymoon, Katie and Johnnie!