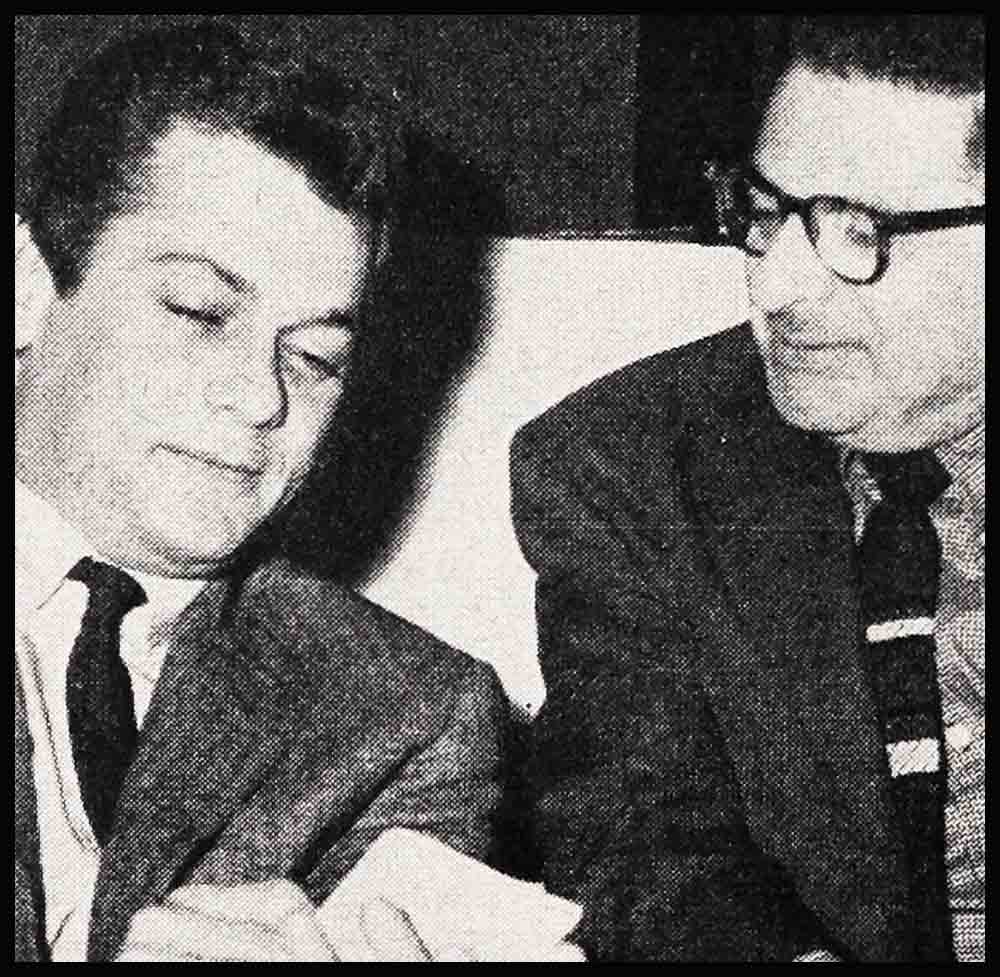 I wish Marlon Brando would return to playing Brando. As much as I’m opposed to an actor being typed, I miss Marlon in this role and don’t willingly accept substitutes. . . . Privately, Elvis Presley plays records of singers who make the lyrics clear and intelligible. . . . Wonder why Jose Ferrer overacts when someone directs him in a movie and underplays when he directs himself? . . . I’d like to know which picture Arthur Godfrey likes better: “The Great Man’’ or “A Face in the Crowd.” . . . Tony Curtis told me if he hadn’t become an actor he might be a press agent, or even a columnist. . . . Archibald Alexander Leach is a marquee name, but you see it as Cary Grant. . . . The best female singer in pictures is Doris Day. The best male singer in pictures is Frank Sinatra. It’s about time they teamed to make another picture together. . . . I’m of the opinion that “Baby Doll” could have been as big. if not bigger. without the ban. . . . Showing her true colors, Carroll Baker is a brunette. This might be why several movie producers who wouldn’t give her a role in the past don’t recognize her now. . . . Beverly Hills is fifty square miles located in the midst of the 454 square miles of Los Angeles. . . . Anyway, Tab Hunter believed he could sing! . . . Diana Dors once said she owed everything to three dimensions: 35 bust, 23 waist, 35 hip. . . . Anita Ekberg told me she dislikes people who sit and stare at her. “Just because I’ve been put together well is no reason for people to stare at me. It’s still impolite.”

Yul Brynner is going to change his performance in his next movie by wearing a toupee. . . . How long can the Marilyn Monroe type crash through? With king-size Jayne Mansfield, I’d say, as Oscar Hammerstein wrote it in a lyric: “They’ve gone about as far as they can go.” . . . “No matter what anyone might comment about me,” declares Jayne, “the fact is that I grew my own figure.” . . . I’ll wager that Joan Blackman is going to be one of next year’s movie stars! . . . When asked what was her greatest struggle. Joan Collins told the interviewer: “Getting into my tight evening dress.”

I’m waiting to see Kirk Douglas play a modest. naive fellow, such as Tony Perkins portrays offscreen. . . . Jane Russell in “The Fuzzy Pink Nightgown” (alluring for a marquee) plays a movie actress who is mysteriously lured and kidnapped. While making the picture Jan

e never realized the same role would make a star out of Marie McDonald. . . . I’ve grown accustomed to Natalie Wood, and am becoming fonder and fonder of her. . . . But what’s with Nick Adams? He hasn’t ever met a friend who doesn’t happen to be a celebrity —and without the celebrity becoming subject of a gushy magazine article. . . . When Rossano Brazzi was last visiting here, he told me he doesn’t object to a touch of feminine temperament. “I love the beauty in a woman’s face when she flares up as much as I admire her look of regret after it has happened.” . . . June Allyson could get to be known as the retread actress. June played the lead in “You Can’t Run Away from It” (originally “It Happened One Night”) and now she’s doing the remake of “My Man Godfrey.” . . . If the marquee advertised Luis Antonio Damaso de Alonso, you’d be seeing your old friend Gilbert Roland. . . . Two Western stars who ride horses best are John Wayne and Joel McCrea. both of whom were raised and attended school in Hollywood. . . . I’d like to see Janet Leigh get the glamour treatment and sex build-up. She has the natural equipment to be a prominent movie star . . . I watched Mike Todd eating popcorn at the movies. . . . Kim Novak’s stardom continues to shine brighter. Yet Kim will admit she’s no smartie-pants. “Somehow I managed to graduate from high school, but I think the fact I had a lot of male teachers helped.”

Shirley MacLaine has yet to do anything in a movie as good as her screen test. When Shirley does, it’ll be a riot. . . . At a party, I always enjoy sitting at the same table with Debbie Reynolds and Eddie Fisher. . . . The first man to build a home in Beverly Hills (year. 1907) was Burton E. Green, who named the community after a place called Beverly Farms in Massachusetts. . . . Mamie Van Doren would like you to know she has no secret formula to make her hair the shade it is. “Zsa Zsa once tried to get it from my hairdresser.” . . . Meanwhile Miss Gabor advises the gals: “A man prefers his girl friend to be just bright enough to realize what a bright person he is.”

I wonder if Rock Hudson still acts like a movie fan about Lana Turner. . . . Incidentally, U-I has them both signed and could co-star them in a picture, which would be smart! . . . The United States of America celebrates Eva Marie Saint’s birthday with her. Because she’s a regular Yankee Doodle Dandy, born on the Fourth of July. . . . Two boys outside the Rodeo School on the side walks of Beverly Hills: “How’s your father?” “Why do you ask?” “Because last year he was my father.”

That’s Hollywood for you.