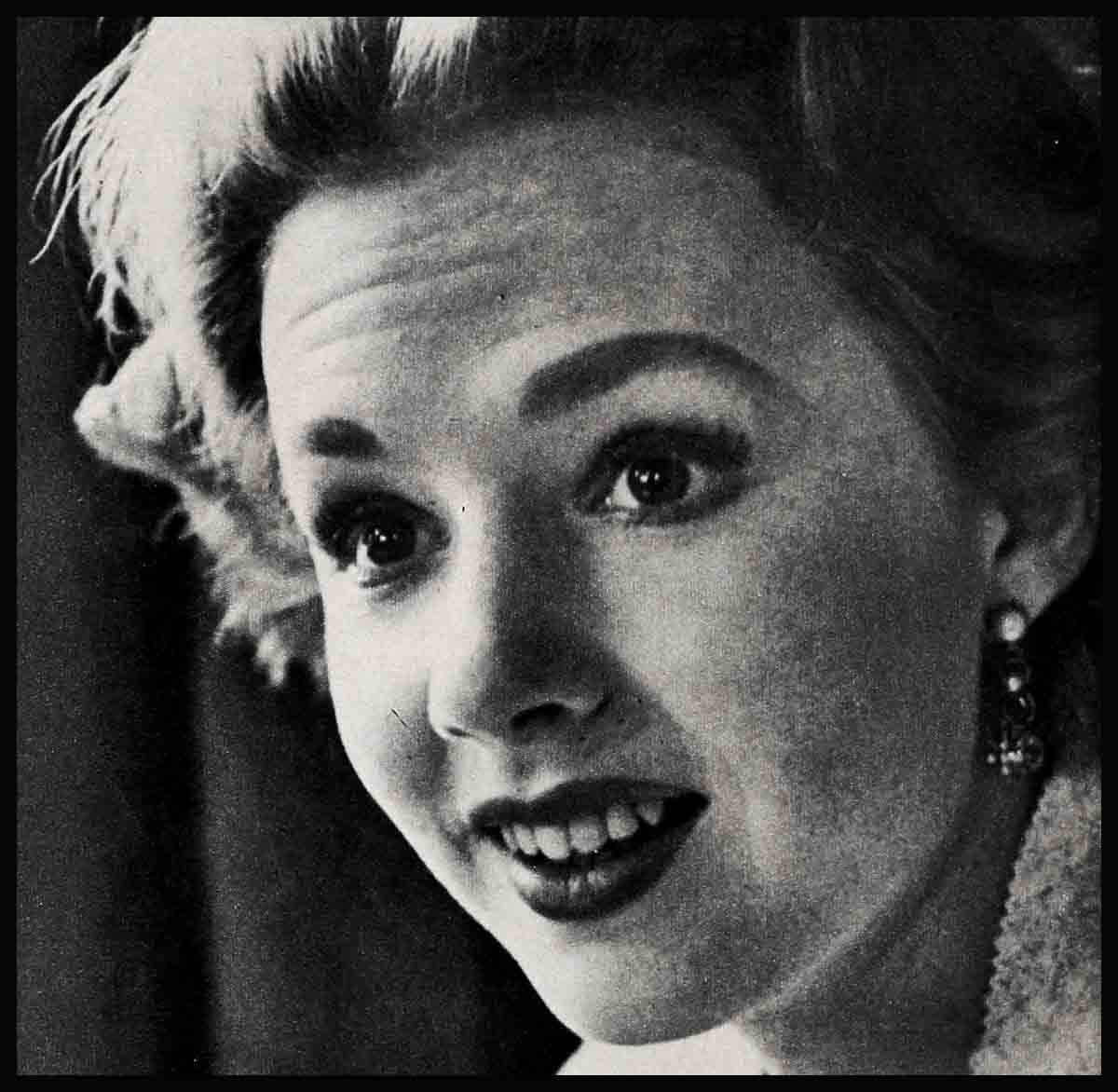 If a fellow named Bing Crosby hadn’t taken the phrase, “Call Me Lucky,” and made it his personal property, says Piper Laurie, she’d like to latch onto it herself. For there’s no set of words that tells her success story better.

Among the good things that have come her way, along with the career she dreamed about, is her friendship with the stronger sex. “I have found men always patient, generous and kind,” says Piper. “In fact,” she adds, “I trust men more than I do women.”

And men more than return the compliment. Take, for instance, her long-standing friendship with Rock Hudson, with whom Piper co-stars in her current movie, “The Golden Blade.”

“Believe me when I say I can discuss anything with Rock,” says Piper, “no matter how personal. We can be serious—often are—but mostly I like to be with Rock for laughs. I can’t worry about anything long when I’m with him. He won’t let me.”

And neither will Leonard Goldstein. While this or that gallant young man dances amorous attention on little Miss Laurie, Leonard is always there, constant, unfailing, ready to move to her side. Piper sums up her relationship with the charming producer she calls “Dad” in a few words: “I never have to put on a pose with Len. I couldn’t if I wanted to; he knows me too well.

“It isn’t a romance—never was. But he is very wise about Hollywood and he tells me things I’d have to learn the hard way otherwise.”

They all choose Piper, but which will Piper pick?

While people are willing to accept Piper’s statement that there’s no romance with “Dad,” they’re not quite so willing to go along with the “Nothing Serious” label she’s put on her friendship with Brad Jackson. Brad doesn’t seem eager to settle for that himself. He keeps adding high-octane fuel to the flames of romance-talk.

He’s obviously thinking of more than passing friendship—and he proved it when he took a 1,500-mile trip one weekend just to spend a few hours with Piper—from his location for “Son of Cochise” in Moab, Utah, to hers in Glacier Park, Montana, where she was shooting “Rangers of the North.”

Sure, she thinks Brad is charming, she will tell you. “And so are Rock and Leonard, too.” And sure, she wants marriage. “Yes, now. After all, these are the things that matter in a woman’s life—love, marriage, children.”

And it’s not, she says, that she hasn’t yet met a man who attracts her enough. “Oh, no,” she murmurs mysteriously, “It may be that he just hasn’t found me attractive—yet.”

The man she means may be Rick Eller, the UCLA student for whom she’s cherished a years-long crush.

But it’s more likely Carlos Thompson, whom she’s been accused of snatching away from Yvonne DeCarlo. She and Carlos were seen together constantly before he took off for Europe to make “The Flame and the Flesh.” And that, said Hollywood pulse-checkers, looked like love.

Whoever her mystery man is, there’s no doubt that if Piper wants him to be the real thing in her life, that’s the way it will work out. For Piper has a knack for getting what she wants—and apparently without even trying!