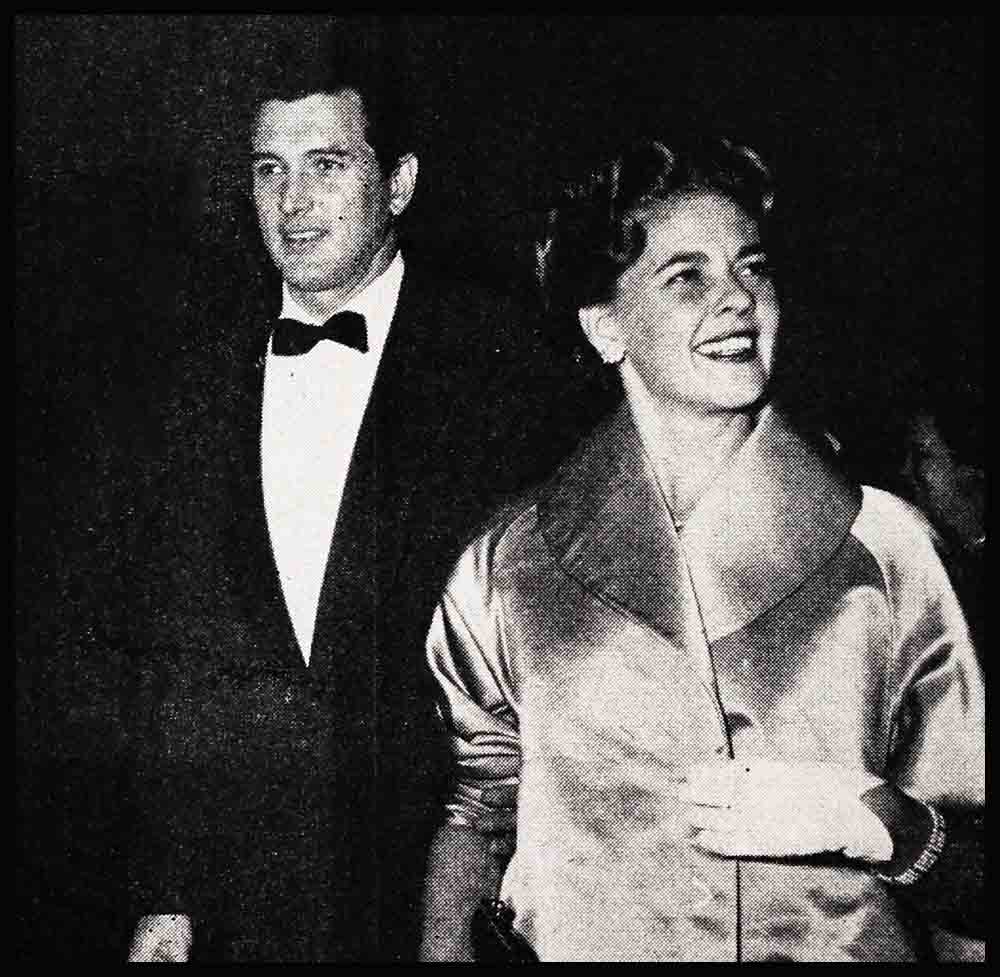 False Rumor: The report that Natalie Wood had spent the afternoon and evening at the Santa Inez Inn in Santa Monica with still-to-be-divorced John Ireland was completely erroneous. What actually happened was Natalie and some friends attended a luncheon party at the Inn. John also was a guest and was captivated by the vivacious Natalie. Incidentally, Natalie seems to he going her own sweet way these days and ignores friends’ advice to slow down. But while she seems to be on a whirl of dates, it’s Nicky Hilton she turns to most often. When she became ill on the “Bomber B-52” set Nicky was at the Warners lot in a jiffy; and when he left for New York recently it was Natalie who drove him to the airport. They even quarrel publicly.

Lucky Girl: When Susan Strasberg makes her second film, “Stage Struck” she will enjoy the kind of “protection” which few young players get these days and which every one of them needs. Susie not only has Henry Fonda as one co-star but the smooth and charming Herbert Marshall as the other. Even if Susie weren’t the superb young actress she is, those two would guarantee no scenes could go wrong.

Incidentally, there was a completely false rumor going the rounds of Hollywood some time back that Marshall was quite ill. There never was a word of truth in it. As evidence, look at Bart’s work schedule in recent months. He no sooner got back from making an English picture with Arlene Dahl than he was starring in the Loretta Young TV show opposite Viveca Lindfors, did a Lux video as “Now Voyager” and the George Gobel show, as well as working on “Stage Struck” in New York, and looking incredibly handsome in all.

His Brother’s Keeper: Some people are beginning to ask, “What is he trying to prove?” when Frank Sinatra’s name is mentioned. Ever since Frank and Ava parted, Frank has been busy enough for three men—making one picture after another, night club engagements, TV appearances and keeping up a busy social life. And on top of that, Frank always finds time to participate in more charitable work than most stars with far more time on their hands. One of the big beefs Ava had with Frank when they lived together was he didn’t spend enough time with her—yet, during that period Frank’s public appearances were comparatively curtailed. We remember one incident that took place in a Chicago hotel when Frank was there on a personal appearance tour. Ava was with him. He’d promised to fly on to Washington for a benefit performance, but Ava. bored with the whole thing, insisted they return to California. If it had been just another night-club engagement Frank might have given in to her wishes, because at the time he was so in love with her she could twist him around her little finger. But Frank wouldn‘t go back on a promise. He and Ava had a big scene and she returned to Hollywood alone. Though this took place a long time before they finally separated, we’ve always thought it was the beginning of the end for them. When a woman comes between a man and his ideals, the “lady” rarely wins.

Tamblyn’s Troubles: If the rumored split-up with his lovely wife Venetia Stevenson isn’t enough to make him unhappy, Russ is also upset over the way his career is going and he doesn’t care who knows it. M-G-M has had very little for him to do and when he was offered a part on TV in “Jack and the Beanstalk” the studio wouldn’t let him play it. Now Russ has a chance to get some of his troubles ironed out. His agent is trying to arrange a loan-out deal for Russ to play the lead in Kirk Douglas’ production of “Young Lovers.” We hope Russ gets the break he deserves and even more that he and lovely Venetia patch up their differences.

Gold Medal Awards Dinner: Amongthe several hundred guests that showed up for Photoplay’s dinner in the Crystal Room of the Beverly Hills Hotel last month were a handful of movie greats who had attended the first dinner thirty-six years ago. Among them was Adolph Zukor who accepted an award on behalf of his old friend and co-worker Cecil B. DeMille, whose “The Ten Commandments” was chosen as one of Photoplay’s ten best movies. It was Zukor’s film, “Humoresque,” that received our best film of the year award way back in 1920. An amusing sidelight of the dinner this year, which brought out just about every big name in Hollywood, was an admission by Bob Wagner during the evening that he had slipped into his first Photoplay awards dinner back in 1949 via the kitchen. Lacking an invitation, he decided to crash the party and walked in with the waiters carrying a tray. He joined a friend after the dinner was over and no one was the wiser. Bob admitted, however, that it was much more fun attending the dinner as an actor than as a waiter.

News Items: While Jack may he a Lemmon he’s not “sour” on life even though he’s having to learn all over again how to be a bachelor. When he and Cynthia broke up Jack appeared to be licking his wounds in private but recently he has been seen doing the town with some of Hollywood’s prettiest ladies including Mona Knox and Felicia Farr. . . . Universal-International is beating the drum hard for O. W. Fischer. And in case this sounds like a brand of whiskey or a new-type overcoat, it isn’t. O. W. Fischer is a handsome German actor, destined to be a very romantic lead. Among the girls on the lot he’s already known as “W.O.W.” Fischer. . . . Kay Kendall, who is one of the reasons that Rex Harrison is taking a vacation from “My Fair Lady,” makes a dashing figure in the magnificent wardrobe Orry Kelly whipped up for her in “Les girls.” For Kay this is her first American movie and it’s a sure bet that it won’t be her last. She’s really a stunner and loaded with talent, too. . . . Marisa Pavan and Jean Pierre Aumont are just about the most cuddlesome couple in Hollywood. Wouldn’t it be nice if Marisa had a little bambino soon so that sister Pier’s Perry would have a kissin’ cousin to play with? … No Age Limit: Mike Todd’s age was a carefully kept secret until he and Liz were married. He then announced he was 54, thirty years older than his bride. He says, “She thinks I’m much too young for her, anyway.”

Calypso Magic: We had lunch with Robert Rossen the other day (he’s one of the brightest producer-director-writers in Hollywood) and he was full of praise for an already highly praised singer, Harry Belafonte. It seems that Belafonte not only sings in “Island in the Sun” which is being filmed in the Caribbean but has written two calypsos that youngsters will soon be humming. It was Belafonte, also, who came up with a musical answer to a tricky scene. At one point in the drama, James Mason makes a political speech and the script calls for him to be shouted down by the native population. Belafonte, scouting native songs, discovered one that is called “Mama, Mama, Here Comes the Boo Boo Man,” which the islanders sing when they want to poke fun at somebody they don’t like. Incidentally, this picture reunites that great team of Belafonte and Dorothy Dandridge who were so wonderful in “Carmen Jones.”