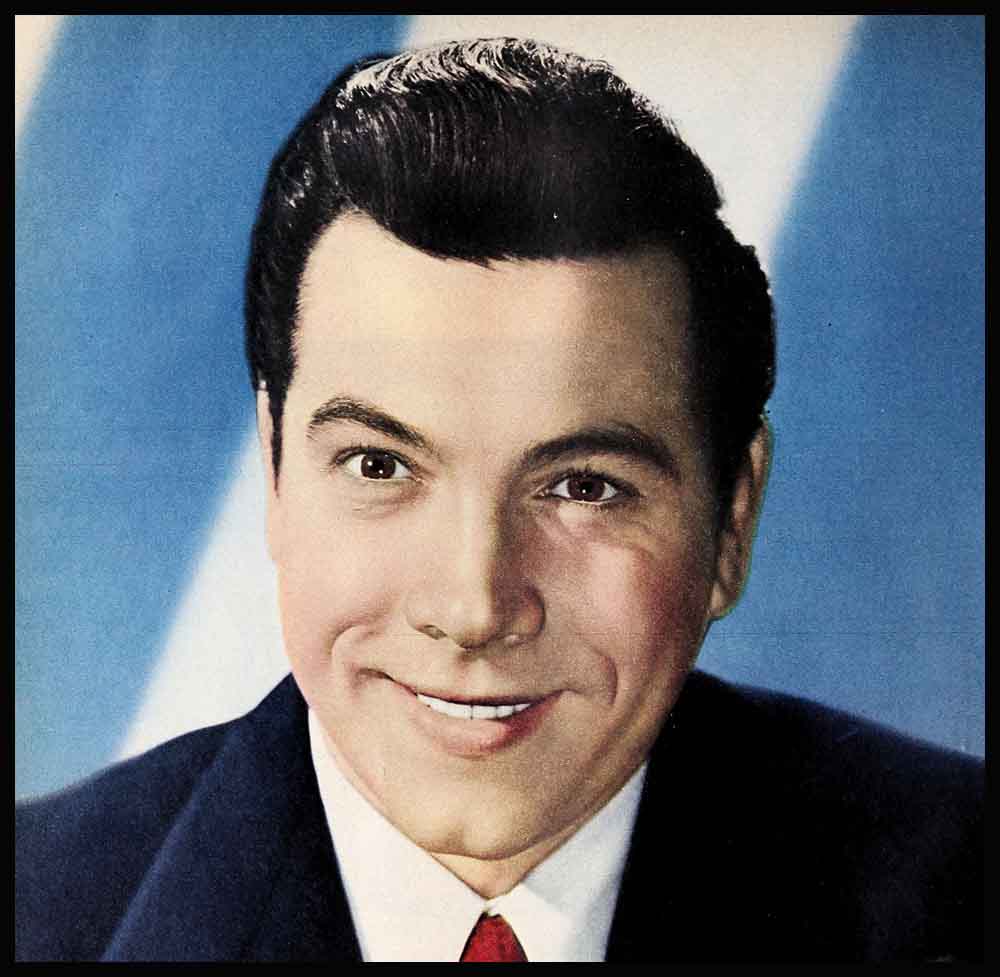 The “vicious whispering campaign” against Mario—whispering, my hat, bellowing would be more like it—started during the production of “The Great Caruso.” It reached an explosive climax when Mario refused to make “Because You’re Mine” (originally titled, “The Big Cast”)

Mario’s studio accused him of being egotistical, uncooperative, temperamental and ungrateful. In short: A headache.

“Mario,” I said over the phone the day he returned from Oregon, “I hear you’re a prize headache.”

“No, Hedda, no,” he shouted. “I’m not, I’m not. Don’t believe those horrible things you hear about me. They’re not true.”

It was agreed that we would get together at Mario’s huge rented house in Beverly Hills the following afternoon.

If you have to take off weight, heaven forbid, there’s certainly no better place in the world to do it than at Ginger Rogers’ Rogue River Ranch near Medford, Oregon. Ginger doesn’t usually rent her ranch, which is her pride and joy, but when Mario asked her, she relented. With his attractive wife, Betty, his manager, Sam Weiler, and his press agent. Jack Keller, he spent four weeks there. He rode horseback, he chopped wood, he fished, and he sweated over woodland trails in a heavy rubber reducing suit. When he left Hollywood he weighed 234 pounds. He was down to 204 when he returned. One hundred and ninety pounds is his goal. He swears to me that he will keep his weight down to this figure if it kills him.

“Well, Mario,” I said, after his big effusive Italian hug, “what about this hassle with your studio? Who’s calling whom what? As if I didn’t know.”

“Peace has been declared, and peace, it’s wonderful,” said Mario happily. “We got together. They admitted their mistakes. I admitted mine. And now we’re friends.

“It was like this, Hedda. When I read the script of ‘Because You’re Mine’ I didn’t like it. However, for the records, when that item appeared in the columns that I had sent the script back to Joe Pasternak unopened, I hadn’t even received it! I’d never do a rude thing like that. But eventually I did get it, and when I read it I knew it was not for me. I just couldn’t follow ‘Caruso’ with that turkey. How do I get out of it? I thought. I racked my brain. I know—I’ll be the male Judy Garland. The studio took Judy out of a picture when she became overweight.

“I started eating everything rich, something I like to do anyway, and soon I had gone up to 200 pounds. But the studio kept saying, ‘You look wonderful, we’ll start the picture next week.’

“Hedda, I looked awful. And I realized I had figured it all wrong. I couldn’t let the public see me so fat. And I couldn’t do that picture. I had the nervous jim-jams. I was moody, irritable. And then my wonderful wife Betty took charge. She asked the big boys at the studio, Dore Schary, Eddie Mannix and Joe Pasternak to come to our house, one by one, so we could get to know each other better. The afternoon Dore came he said he could only stay a few minutes.

“Dore and I discovered we have much in common,” Mario continued. Dore Schary is his boss now’ that Louis B. Mayer has left the studio. “We have the same background. We were brought up in poor neighborhoods of big cities and we learned when we were kids that we had to fight for everything we got in this world. As kids our instinct was to fight first and think later. The only trouble is,” Mario grinned, “I still fight first and think later.”

It was agreed finally that Mario would be given eight weeks in which to get into picture trim and that the script of “Because You’re Mine” would be re-written.

Mario is on a high protein diet. This is a real hardship for a fun-loving, food-loving fellow like Mario. “I made a mistake in p letting myself get so fat,” Mario says with a sigh “I’ve made a lot of mistakes—but things happened so fast. My greatest fault. Hedda, is that I do everything too much.”

“That I believe. There’s nothing halfway about you, Mario.”

Mario believes that much of his bad publicity stems from the boys at the studio who do not like him.

His trouble with the publicity boys, he believes, must have started in a Mid-west city where he was giving a concert. The studio press agent, 2,000 miles from home base, imbibed rather freely, and Mario had to shove him none too gently out of the auditorium. He returned to the studio with his knife sharpened.

Mario also got off to a bad start with others of his fellow workers, when he promised to sing at the studio party given by the technicians. He was in the midst of production of “Toast of New Orleans” at the time. It was a cold, raw day and all day Mario had done one take of a scene which showed him being hauled out of the studio tank. By three o’clock his voice was getting hoarse.

Look, Joe,” he said to the producer, “I’ve got to sing at the studio party tonight. Let me go home and dry out.”

“It’s more important that I get a scene finished than that you sing for the studio boys,” said Pasternak.

It was arranged with Kathryn Grayson that she would make a lengthy announcement at the party explaining that Mario had been dunked all day and was completely water-logged. But instead, Kathryn merely said, “Mario can’t be here tonight.” The technicians didn’t like it. Mario was a snob and a stuffed shirt, they thought. He could sing at producers’ parties, but he couldn’t sing at theirs.

“Oh-oh,” I said, “so that’s what started your feud with Kathryn Grayson.”

“No, Hedda, it isn’t true” Mario insisted. “Kathryn is one of my wife’s best friends. I like her very much. And besides, I’m sentimental. I’ll always have a soft spot in my heart for Kathryn because she was in my first two pictures.”

Actually, Mario hadn’t sung at producers’ parties for some time. Though I can see why the grips and technicians were pretty sore As soon as a studio signs a player on a term contract they immediately assume that they own him lock, stock and barrel. Soon after he signed with Metro, Mario was asked to sing at eight of Louis B. Mayer’s parties. Mario’s motto is, “Don’t put it in the living room, put it on the screen.” But he wanted to be agreeable. Right away, other producers and directors started asking him to sing at their parties.

His real blow-up came one night when Mario was having some of his good friends in for one of Mom’s spaghetti dinners. The phone rang, and a very prominent Hollywood director insisted that he come over right away and sing for his guests.

“I, too, have guests,” exploded Mario. “Why don’t you come over here and amuse my guests by directing a picture!”

It was thereby decided by many of the Metro biggies that Mario was uncooperative and ungrateful.

Last fall, Mario, making his first radio appearance on my air show, sang “Be My Love.” That started the avalanche. Over a million records of “Be My Love” have been sold since then. On tour Mario wrote me, “I am eternally grateful to you, Hedda.” And. you know, I believe him. When he was given a gold record for the one-millionth sale he would allow no one to present it but myself.

“I read in an article lately,” I said, “that an Army buddy of yours. Johnny Silver, told a magazine writer that when you were at the air base at Marfa, Texas, you didn’t take a bath for six months, and you didn’t change your socks for six months. True or false?”

“Hedda,” said Mario quietly. “Have you ever seen anybody who hasn’t taken off his socks for six months? H’mmm? I’d like to see socks that hold up that well.”

“It said irs the same article that Johnny Silver pasted your name on a Frederick Jagel record, and not a Caruso record, and played it for Peter Lind Hayes when he was recruiting soldier talent for an Army Air Force Show.”

So help me, Hedda, it was a Caruso record. And I pasted the label on it.”

Mario is hurt that some of his former pals have turned against him in print. Most of them were friends to whom he had loaned money after he had gotten into the chips. “I even cooked steaks for them,” added Betty indignantly When one of his former pals was approached by a reporter, he is supposed to have said, “I wouldn’t have a thing to say about that son of a so-and-so.” It could well be this man was extremely disappointed because Mario didn’t get him a part in “Caruso.”

“I tried to get a lot of the boys parts in my films,” said Mario. “But Joe Pasternak has his own ideas about casting. Why should these guys turn on me?”

Our conversation was interrupted by the appearance of Mario’s two little girls, Colleen and Elissa, all dressed up in ribbons and bows to see Aunt Hedda. They’re little beauties, with Daddy’s dark limpid eyes. Mario is simply crazy about them. He had intended staying in Oregon a month longer, but he couldn’t bear to be away from his babies. “Twice a day,” said Betty, “we’d have to drive the thirty-five miles to Medford so Mario could call home.”

Mario is especially annoyed with an item that recently appeared which said, Mario Lanza wants out of his contract. This is very ungrateful of him as Metro discovered him and made him the big name he is.” Mario wants it known that he has never asked to be let out of his contract. He considers his contract quite fair. However, he wants it known that Metro didn’t discover” him. The concert that Ida Koverman arranged for him at the Hollywood Bowl was his 76th concert. He had been pretty well “discovered” before then.

He loves being in pictures, is the first to admit that they are the backbone of his great success. Pictures travel all over the world, and so fast. Through them, he’s had many concert dates, bigger and better radio contracts and record contracts He’s become so popular that a concert hall can no longer hold the crowds that want to hear him. When he goes on tour next spring or summer, he will sing in stadiums. Whereas he used to sing perhaps to 2,500 people, now between ten and fifteen thousand people a night fight to get in to hear that golden voice.

Not only golden, but powerful. A mirror hanging on his living-room wall bears witness to its power. Mario, waiting for his lunch, was listening to a recording of tenor Aurelino Pertile singing “Adriana Le Coeuvre.” Enthusiastically he started taking the high notes along with Pertile. He was holding a “D” when his butler entered the room. There was a shattering sound. The mirror cracked from the vibration of Mario’s high tone. The butler dropped his tray. “Boss,” he said, “I seen it with my own eyes.” And I can add that’s a truthful man. I’ve seen it too.