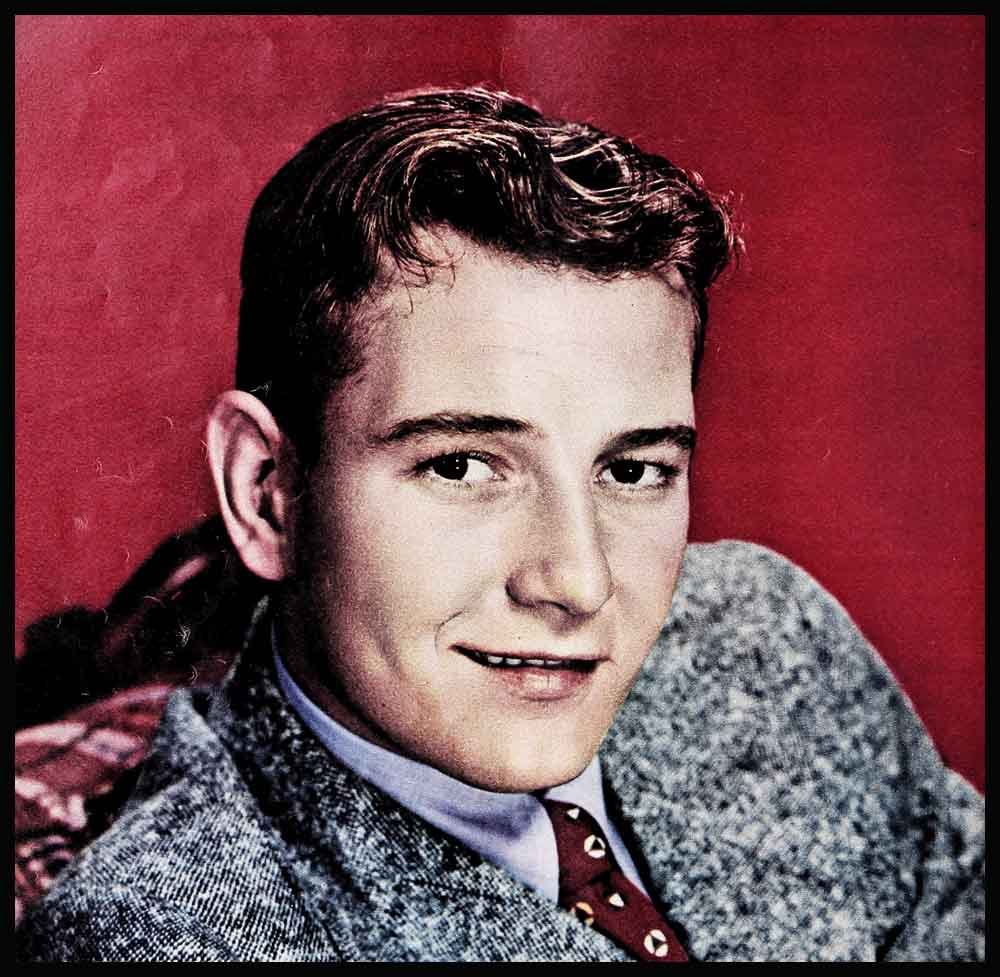 Tom Drake waited nine long years to marry his “Chris.” And when it finally happened it was in one of the dizziest, most hurried, most hectic whirls you’ve ever heard of! They both think that if they live to be a hundred they will still feel a bit breathless when they recall that trip to Las Vegas to be married.

“That’s one little trouble with a motion picture career,” Tom grins. “It so often doesn’t give you enough time for the niceties of life . . . like weddings.”

Actually, though, they loved every moment of it and the memories will always be very dear—if they can ever get them really sorted out.

Maybe we’d better go back to the beginning. The first time Tom ever kissed Chris, when he had known her only a few days, his lower lip caught in the braces on her teeth! That was when he was seventeen and she was fourteen and they were both having a fling at acting in summer stock at Poughkeepsie. The kiss was a stage kiss, all in the interests of their mutual art, but Tom found that he had enjoyed it very much, despite the braces on her teeth and the rehearsal audience which laughed unfeelingly when he emerged from the embrace with a bloody mouth.

After that there was never any other girl for Tom, although life and fate and other cosmic forces seemed determined to keep them apart. He had pretty rough sledding, trying to get a start in the theater, and marriage for him at that age and with the sparse dollars he managed to earn at his chosen profession, was simply out of the question. The pretty little girl—oh, yes!—her name was Christopher Curtis—went on to swifter successes than Tom’s, appearing as actress and singer in seven or eight Broadway shows, some of them very successful. Tom kept on plodding at his acting.

Along about the time when he began to be making some real progress in his own career, he learned that Chris had married another actor—Michael Ames. That, you might have thought, was that. But somehow Tom never really believed it. So when he learned, eight months or so ago, that Chris was in Hollywood with her three-year-old daughter and that she had been divorced, he wasn’t really very much surprised. By this time his stage success in “Janie” was well behind him, he had a fine Hollywood contract and was busily piling up outstanding performances in such pictures as “Two Girls And A Sailor,” “Mrs. Parkington” and “Meet Me In St. Louis.”

His feeling for Chris hadn’t changed a bit. He lost no time in convincing her of this and persuading her that the logical—indeed the only—thing to do was to take up their lives where they had left off and start over, together.

But it was one thing for the two of them to agree to do this and quite another thing to arrange practical details. They were as sentimental about it as they had every right to be and they wanted a quiet, leisurely wedding with a little time for a proper honeymoon. Five different times they made their plans . . . five. And each time something arose to compel them to postpone it . . . “just for a little while.” Tom was called for retakes or tests or some of the other myriad things a young actor must attend to, even when he is briefly between pictures.

Chris was wearing the ring which had belonged to Tom’s beloved mother, who died when he was sixteen. They waited . . . and waited. They kept their engagement a secret from even their best friends. Somehow, it seemed like something which belonged just to them until they could arrange a wedding.

Finally on Monday morning (it was February 18) Tom telephoned Chris. “I have almost a clear week!” he told her with vast excitement. “I mean, there are probably fifteen or twenty things for me to do but for once none of them seems really vital. Let’s do it now. Let’s start for Las Vegas today!” Chris agreed and Tom rushed off to buy a ring and make plane reservations and break the “non-vital” appointments.

He got the reservations all right. Then they were canceled. He managed to get some more . . . and those were canceled. It began to seem to the two of them that fate was being just plain malicious . . . that after waiting nine years they were still to be frustrated about that wedding. Then two very good friends came to their rescue. Peter and Maureen Cookson (Mr. C. is a well-known actor) volunteered to drive them to Las Vegas. They managed to start at ten on Monday evening.

“After we were really on our way,” Tom says now, “everything seemed peaceful. It wasn’t, really. Lots of things happened to delay us and to put more obstacles in our way. But it didn’t seem to matter what happened. We seemed to slide—or float—through them all, the way you do sometimes in dreams.”

It took them a good deal longer than they had expected to get to Las Vegas. They didn’t arrive there until eight the next morning. But for the life of them, neither of them can recall, to this moment, what caused the delays. It might have been a flat tire or some detours . . . they don’t know. A happy haze simply settled over them. They were on their way.

Once arrived, there were details like finding rooms in which to rest and tidy up. There was a wedding corsage to buy and a minister to locate. A license to secure. Chris and Tom still floated . . . it was probably just as well that the kindly Mr. and Mrs. Cookson had gone along, after all; the principals in this drama were so bemused.

They found a wedding chapel called The Wee Kirk o’ the Heather and made an appointment to be married there that afternoon. Then they “had lunch somewhere . . .” and went back to the chapel. But there had been another hitch. The chapel was in use and no one knew when the happy pair could be married in it. The minister offered a compromise and invited them to be married in his living room.

Chris pinned her gardenias to her shoulder and Tom nervously located the ring . . . and then they found that two or three other couples had preceded them and that they would have to wait for those marriages to be performed. Meanwhile the minister’s wife . . . they guessed that was who it was . . . could be heard bustling to and fro doing something about food for those other couples. Apparently some wedding feasts were to be served right at the parsonage and there were many comings and goings.

Then suddenly it was there that moment they had been waiting for. The minister was opening his book and beginning to intone the beautiful, ancient, solemn words. Chris looked up at Tom and he slipped the slim gold band on her finger and presently everyone was kissing everyone and all the eyes were as dewy as eyes should be at a wedding and everyone was aware of the scent of the gardenias Tom had crushed when he kissed his bride . . . and it was over.

They were all suddenly very gay and it occurred to them that a wedding calls for a celebration. They had been so intent upon accomplishing the wedding, itself, that they hadn’t thought of this before. But they found a spot which was bright and now they discovered that they were hungry and Chris had her very first drink of champagne because you must have champagne on a day like that.

Then the Cooksons thought it was time for them to set out for Hollywood . . . and Tom realized that they had no hotel accommodations in Las Vegas. The hotels were full but he found a room in a motel which he swears was called “Ye Wayside Court Ye,” although that hardly seems possible, now, does it?

They danced at El Rancho that evening and the next day got reservations on a train for Los Angeles. All the obstacles seemed to be smoothing out neatly.

On their first evening in Hollywood, realizing that not a soul except the Cooksons knew of their marriage, they set out contentedly to see a movie. On the way they encountered Tom’s old and very good friend, Henry Willson, and they suddenly simply had to tell him. He whisked them off to Mocambo where presently Jim and Verna Brown joined them and all the gaiety was heightened by the fact that they knew what no one else in the glittering room knew . . . about them. Some vestige of caution made Tom think he’d better tell his studio about the step he had taken before he started shouting the news to the world—which was what he suddenly, desperately wanted to do. So no one, except the little circle at their table, knew about it until the next day and so well had Tom and Chris kept the secret of their being in love that the news practically exploded in Hollywood.

Chris is a pretty blonde girl who grew up in Pennsylvania. She worked at a stage career (with a short time out for her first marriage) from the time she was thirteen, and had joined the Poughkeepsie summer stock company. Tom sees no reason why she shouldn’t resume that career now.

They are living, for the time being, in the furnished home which Tom rented a year or two ago. Later on they want to own a smallish home with a great deal of ground around it for gardens and lawns and live things . . . “like chickens.”

Tom had a great deal of sorrow in his early youth. In addition to that, he had to wait nine long years before he could marry the girl of his dreams. He says he has “come out into the sunshine . . . now.”