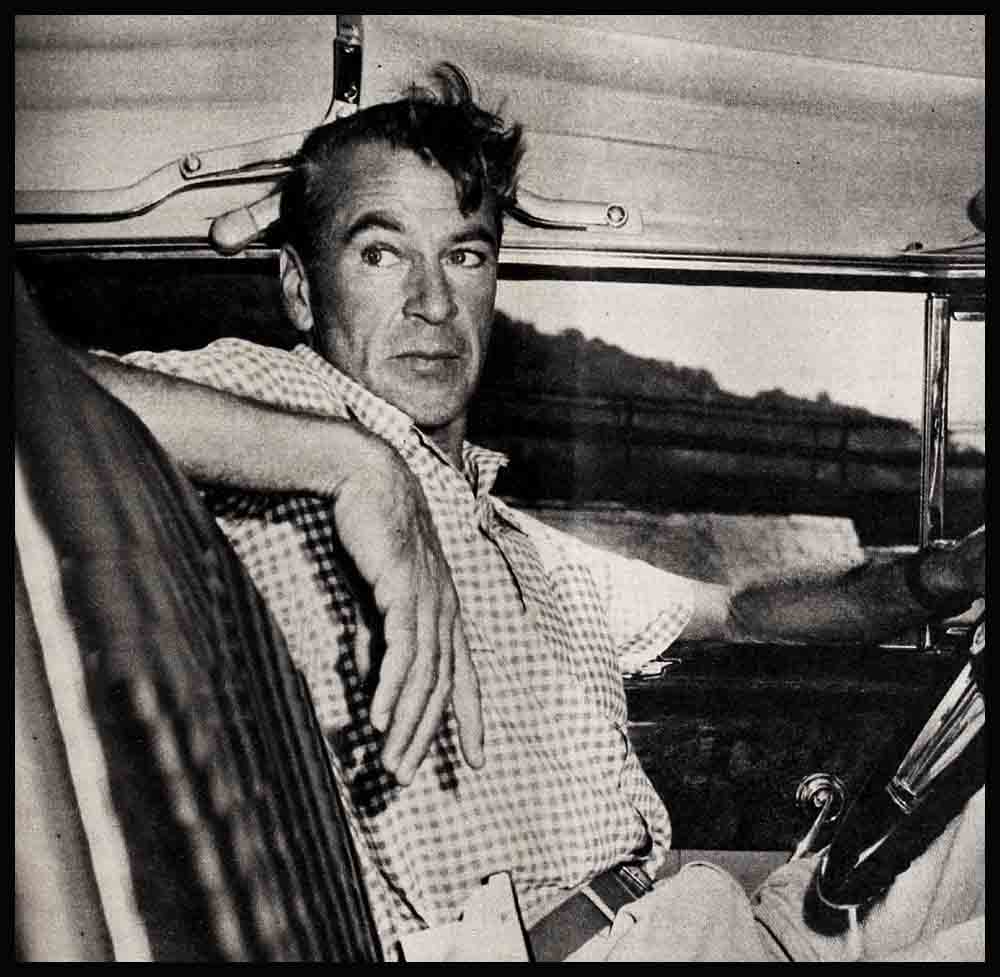 There comes a time in many marriages of long duration when even the happiest of couples reach that critical season best described as “the dangerous years.”

And, recently, the chill wind of those years seems to be circulating around the marriage of the Gary Coopers, who, for sixteen years, have been thought of as one of Hollywood’s most solidly happy couples.

The flurry started when, just before Christmas, stunning, social Mrs. Cooper took their thirteen-year-old daughter, Maria, to New York. Gary remained in Hollywood. Then came the torrent of rumors—were the Coopers going to break up? Was Gary going to leave the home which has been run so perfectly for him all these years and return to the man-around-town life he had lived so fully before his marriage?

Were we again going to be shocked as completely as we were at the Robert Montgomerys’ parting after twenty-two years, the Bob Taylor-Barbara Stanwyck break-up after eleven years and the even more tragic story of the Henry Fondas?

To prophesy what is going to happen in any Hollywood marriage is sticking your neck out a mile—but there are many reasons why the Coopers may try to weather current differences. Gary adores their daughter. He is proud of her and after I broke the story that Rocky was living at the swank River Club in New York while he was here, I happened to sit next to him at a dinner party given by Jack Warner.

I thought I had never seen Gary look so troubled and I asked him how things were going. He is never much of a talker but he seemed to be eager to tell me—about Maria!

“Well, I think I’m working too hard for one thing,” he said quietly. “I’m looking forward to getting to New York to see Maria. I’ve missed her more than I can tell you. She is a remarkable girl—she shines as a student and also she’s fine at outdoor sports.”

He didn’t mention Rocky until I said, “And how is Rocky?”

Then he said, “I have talked to her many times on the telephone—in fact, we talk nearly every day.”

Both Gary and Rocky were frank to admit that a big thundercloud had come up in their marital happiness that kept growing bigger and bigger but which both thought could be settled once they got away from each other and could think things over clearly and honestly.

Far from being angry when I broke the story of their marriage vacation, Rocky sent me a telegram thanking me for the way I had handled it. Gary, too, said he was grateful—both seeming to think I had cleared the rumor-filled air.

What Rocky had said to me over the telephone had been definite and clear after I had asked her if they were parted:

“Well, I’m here and he’s there,” she said. “It’s true we have had trouble. But if you’re asking me about a divorce I’ll tell you right now the answer is—‘No.’ I am a Catholic, and I have no intention of ever getting a divorce.

“I think not many people spend sixteen years together without sometimes having a disagreement—and this is ours. But I have a feeling we will work it out.”

Gary’s close friends say he is very worried. He does not want to break up his home.

Few people are more sincerely congenial than the Coopers. They have, until now, spent all their time together.

Ironically, if trouble had come up in the early years of their marriage even their closest friends would not have been too surprised because their worlds seemed so far apart. Gary, the tall, taciturn actor far famed for his Western roles and the socially prominent Rocky seemed an odd combination for long range bets.

Rocky is the stepdaughter of Paul Shields, wealthy New Yorker, and as Veronica Balfe she had been raised in the rarefied air of Park Avenue, Southampton, correct finishing schools, European vacations and all that goes with this life.

She was a typical debutante—young, lovely ana different from any of the girls that Gary had known. Remember that tempestuous Lupe Velez and the colorful Countess Dorothy Di Frasso were two of his most publicized flames before his marriage.

He fell for Rocky and fell hard after he and the Countess parted, but he had been so long a confirmed bachelor that everyone was surprised when he and the social Miss Balfe took the fateful step those many years ago.

As the years went by, the Coopers proved how wrong those people were who thought they could not balance their seemingly separate worlds.

I think Rocky honestly made every effort to adjust herself to Gary’s way of life. She went hunting with him—and fishing—and just loafing. They bought a Ski Lodge at Aspen, Colorado, where they spent their vacations—and always their adored daughter was along with them. They have even taken her out of school from time to time to accompany them because they could not bear to be separated from her.

Gary said at that time, “We never want to go away without Maria. She goes in for all the sports we do—that is, all except horseback riding. I don’t want Maria to ride—that’s too dangerous, too many accidents could happen. Horses are not dependable.”

That was a surprise coming from our Westerner who is such a fine horseman himself! But that’s a father for you where an adored daughter is concerned.

Yes, Rocky not only tried to adapt herself to Gary’s way of life, she learned to love it. And, in truth, it must be said that he went all out to please her and to know and like her friends.

Their Beverly Hills home is typical of the changes Rocky made in Big Coop’s way of living.

I remember attending a party at their home soon after they were married and I couldn’t help but contrast their house with the one Gary had “batched” in by himself before he met Rocky. Then there had been “trappings” all over the walls, zebra skins, lion and buffalo heads, tiger skins on the floors. Most of these were relics of the safari he had made with Dorothy Di Frasso through Africa.

(After Dorothy became annoyed with Gary she had a few thousand harsh words to say about him—among them was that he didn’t know how to dress until she took him to Bond Street, in London, to buy his shirts and other clothes. Well, whether Gary had a gentleman’s wardrobe or just the cowboy rigs he wore when he first came to Hollywood from Montana, the man is there. And that’s the important thing).

However, Rocky was not long in making short work of the lions, zebras and tigers. Gone forever were those trophies of his adventurous bachelor days.

His “expeditions” became much closer to home and to the conventional. Summers

the Coopers usually spent with her relatives in the Southampton set. I’m not sure that this particularly appealed to him—but I am sure that Gary wanted to do everything that would make his wife happy—just as she had been anxious to share his kind of life.

All married couples have moments when it seems that life together has gone stale— that freedom would be very precious. It happens to the happiest of married people.

But Rocky is very determined—and I doubt very much if she would ever do what Betty Montgomery did in giving Bob his freedom after twenty-two years.

Betty had said to me over the telephone when I talked to her in Las Vegas, “I hung on as long as I could—but there is nothing else for me to do. After all, the important thing is for Bob to be happy.”

“How about you being unhappy?” I felt like saying—but didn’t.

Sometimes I think it’s this restless, unsettled, unsure time we’re living in that’s responsible for so much marriage dissension and trouble. Before we began living (and loving) under the shadow of A-bombs, mature couples fought through their difficulties—but seldom thought of separating.

Now, there seems to be a feeling that “Life is short—love is fleeting. Let us have Today—and forget Tomorrow.”

And so, sane, mature and even balanced people rush to the divorce courts hoping there to find solace for their driving restlessness.

Well, there’s far too much of it—and that’s the way Mrs. Gary Cooper feels. She thinks there is nothing in the world important enough to cause two people who have shared so much and found complete happiness together to resort to a divorce.

“It’s against all I believe and all I have been taught,” she says—and do I admire her for sticking to her principles!

Of course, in any rift, no one person is entirely responsible for the break-up. We cannot say it was Gary who grew restless —or that Rocky failed him somewhere along the line.

Rather, let us say the fault was on both sides—and I sincerely believe the reconciliation, when it comes, will be because both want it.

These are not silly children playing at marriage, picking up their toys and calling everything off with every quarrel.

No, Gary and Rocky are grown-up people who, for sixteen years, have known what real happiness is.

I hope by the time this is in print they will have made up. I don’t know, of course. But I do believe they have a tie stronger than themselves, stronger than any temporary thing which may seem important now—and that is Maria, their only child.