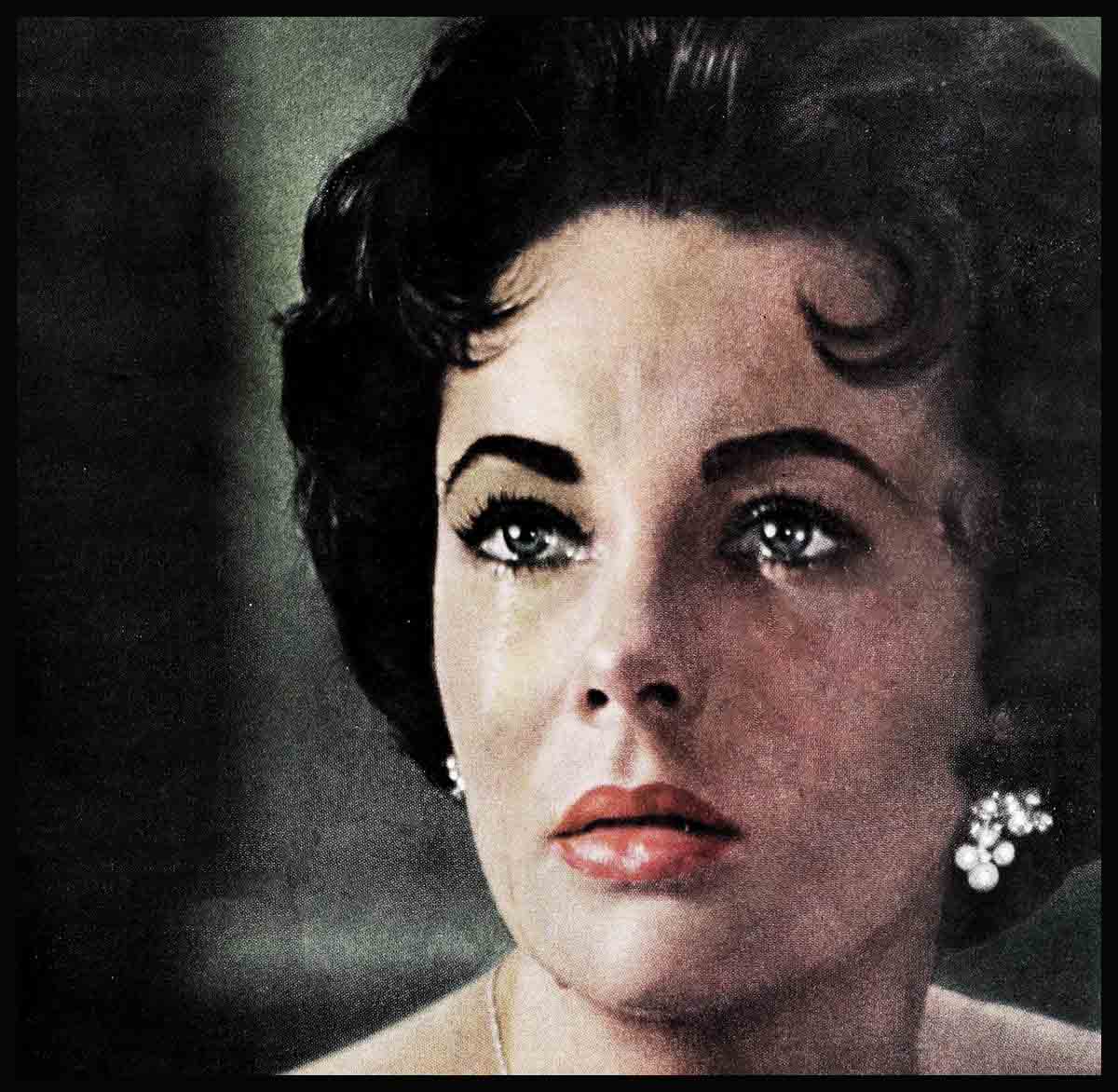 The lovely young dark-haired woman, coming down the staircase into one of Las Vegas’ smartest gambling rooms, seemed to pause, just for a second, as she heard the words, spoken by someone at the tables. But she did not stop. She walked right on . . . seeming unusually thoughtful.

“I’m not surprised,” his companion said. “He’s been down here four or five hours already. And last night longer. Losing all the time. Wish I had that kind of money to throw away.”

“Oh, he’ll pay for it. I hear she’s not crazy about his gambling. There’ll be plenty of trouble in paradise.”

“Trouble in paradise?” his companion repeated, then laughed. “You mean trouble in a pair-of-dice, don’t you?”

“Maybe I do,” he laughed, then added, “But maybe that’s the price. Nothing’s free,” he said, thoughtfully.

Even if the woman had overheard part of their conversation she evidently wasn’t going to let them know, for she walked on past and into the room with her head erect and staring straight forward.

The woman was Liz Taylor.

Men seem to leave Liz for a gambling table.

Nicky Hilton did on their honeymoon. A young teenage bride at the time, Liz was left alone in hotel bedrooms in the South of France while he went off to casino after casino to gamble through the night. For months she had planned and dreamed that her honeymoon would be the most romantic any girl could ever have, picturing them dancing together in the moonlight, dining at intimate, candle-lit restaurants by the Mediterranean . . . yet they were but dreams. For in reality she spent her honeymoon nights alone, pacing her room, watching other couples from her window, wondering desperately what had gone wrong. It left a deep wound.

In Las Vegas, it is reported Eddie gambles long. She sits alone and waits. It is said she cannot plead, as Debbie once did, “Eddie, you lost enough last night to put our children through college. It’s got to stop. It’s got to.” For that was Debbie. Liz won him, surely, by being something very different. But what must she be to keep him?

If sometimes she wants to cry, she must have to cry alone.

Yet, if a wife worries about her husband’s gambling, how must she feel if she is partly responsible for the loss of his success?

Any woman likes to see her husband a success, to feel that she’s part of the reason for his success. Yet right from the start, Liz has not truly been able to enjoy this with Eddie. When they first announced their wedding plans, early last year, Eddie, at the same time, was dropped by the sponsor of his TV program. And there were rumors people only came to see him at his Las Vegas show just to watch Liz in the audience.

It must have been a difficult day, that day he broke the news to her about the sponsor. Maybe it was partly to get away from this sting that they decided definitely to go to Europe the very minute they were man and wife? Perhaps Europe would be kinder.

Eddie’s reported “appearances” while Liz worked in England on “Suddenly Last Summer” dwindled to a mere handful of TV appearances and a few recording sessions. One morning, after a TV show Eddie had done, they had all the papers brought into the dining room in the English castle they’d rented. They divided the stack and flipped quickly to the TV pages. Finally when she had let the last paper drop to the floor, Liz looked wordlessly across the table at Eddie. It must have been difficult to know what to say. The reviews had been bad.

There must have been that same helpless feeling, that same struggle to find the right words that summer when Liz would come home, tired and weary after a hectic day at the studio, to find Eddie waiting for her, knowing he was not working, knowing that he had spent the day just passing the time by playing with her three children on the wide lawns in front of their country home or in one of the large reception rooms inside the house.

It is not easy for a wife to enjoy a flourishing career while her husband stays at home. It’s hard to squelch her own little triumphs so that comparisons don’t come up. For the husband, it’s even harder not to feel a loss of pride.

Some skeptics are quick to point to “Tammy,” Debbie’s hit record, which was supposed to have caused Eddie, who hadn’t had a hit in a year, some hard kidding. And others say this is why Liz worked so hard to help Eddie make his Waldorf opening a success. Others say it is all part of Liz’ desire to quit acting and depend upon her husband for her future.

Back in New York, it was reported that Liz pleaded with her studio for a part for Eddie in “Butterfield 8.”

And one evening, soon after, a reporter, visiting them in their suite at the Waldorf, and remarking about the film, was told by Eddie, “I’m going to play a piano player named Eddie. I never acted before but I’m in the hands of a good director . . . my wife.” Liz was starring in the picture.

Children pay a price, too.

For Liz, her children must concern her too. Three little children who rarely smile in public today, and who will soon be old enough to read the papers.

The chauffeur who served Eddie and Liz while they were in England got to know those children well. Got to know how to penetrate their shyness. And one of the strongest memories he has is of the evening when the boys’ real father, Michael Wilding, came to dinner with his present wife, Susan.

“It was one of the most strained evenings I have ever witnessed,” the chauffeur remarked, telling about it.

All through dinner Eddie and Mike exchanged only the vaguest of pleasantries. Liz and Susan eyed each other cautiously. And when they went into the living room, the atmosphere became decidedly uncomfortable.

For it was time for the boys to be brought in to say hello to their father. Downstairs they ran, in their pajamas, and, when they reached the room, they advanced solemnly and seriously toward their father. They shook hands shyly, stood around awkwardly until Liz took the initiative by calling “off to bed.”

She is not insensitive to her children, not Liz. She must know how a child feels for she is even concerned about those that are not her own . . .

On another day in England, when she was leaving the home to take Liza and the boys for a day on the river, near where they lived, she noticed the housekeeper’s daughter, Sarah, playing in the garden, watching wistfully as they got in the car.

Suddenly, she leaned out of the window and called, “Would you like to come with us? Go and ask your Mommy if you may.”

Friends have rumored that her recent illness might have been caused by emotional upset. But it is impossible to tell. All that is known is that she fought hard to be well enough to be at Eddie’s New York night-club opening. Now that he seemed finally to be having his own triumph, she wanted to be at his side to share it with him.

During the weeks of Eddie’s rehearsal, she stayed in their hotel room alone. She’d always liked New York, she’d always had so many friends there. But this time it was different. Now, she began to feel the sting of being back where people still hadn’t forgotten Acquaintances of Liz who used to be in the habit of calling, just to say hello, didn’t. She waited in that hotel room, alone, knowing the heartache of a telephone that rang only for business and never for a friendly hello or invitation.

Immediately after Eddie’s opening, she was rushed to Columbia Presbyterian medical center. Once again, she was ill. The sparely furnished hospital room was familiar; it seemed like so many other hospital rooms she had been ill in so many times before. She was allowed no telephone calls, no visitors, except Eddie—all the treatment of a patient who is dangerously ill. For weeks, she fought an attack of double pneumonia.

Other times, when she’d been ill, the phone had rung constantly with anxious questions about her and the room had been filled with flowers from her friends. But not this time, even after she was better, when calls and visitors were allowed.

Liz is no exception as an actress. Attention, love, loyalty from her fans are important. Liz knows that she has lost both fans and friends and that her marriage to Eddie caused the break in many friendships.

“I understood how they felt,” Liz told a reporter. “They were afraid to get in the middle. Public opinion was very strong and it was not popular to be on our side. They were not directly unfriendly—they just backed away. To back away is just hypocritical and I don’t consider those kind of people friends.”

It is hard to be happy when you have lost the respect of those close to you.

Many people, close to Liz since her childhood, maintain she never feels that people can love her for herself. “She feels, I’m sure,” said one acquaintance, “that she is loved only for the way she looks.” A frightening thing for a woman. For we all get old.

Can a wife really live this way and enjoy her marriage? Surely she must wonder if she did the right thing, if she is really making him happy.

At least she must want to stay beautiful for him.

And it was true when she gained so much weight, around the time of their wedding, people said Liz was losing her looks. Concerned about this, she began to diet, perhaps to wonder, also, if Eddie might look across the breakfast table one morning and wonder, “Was it worth it?”

A few months later she completely re-styled her hair in an urchin bob.

Maybe it is all just what the man in the gambling room at Las Vegas said, “You’ve got to pay for everything. Nothing’s free.”

LIZ STARS IN “SUDDENLY, LAST SUMMER” FOR COL. SHE’LL BE SEEN WITH EDDIE IN M-G-M’S “BUTTERFIELD 8.” EDDIE RECORDS FOR RAMROD.