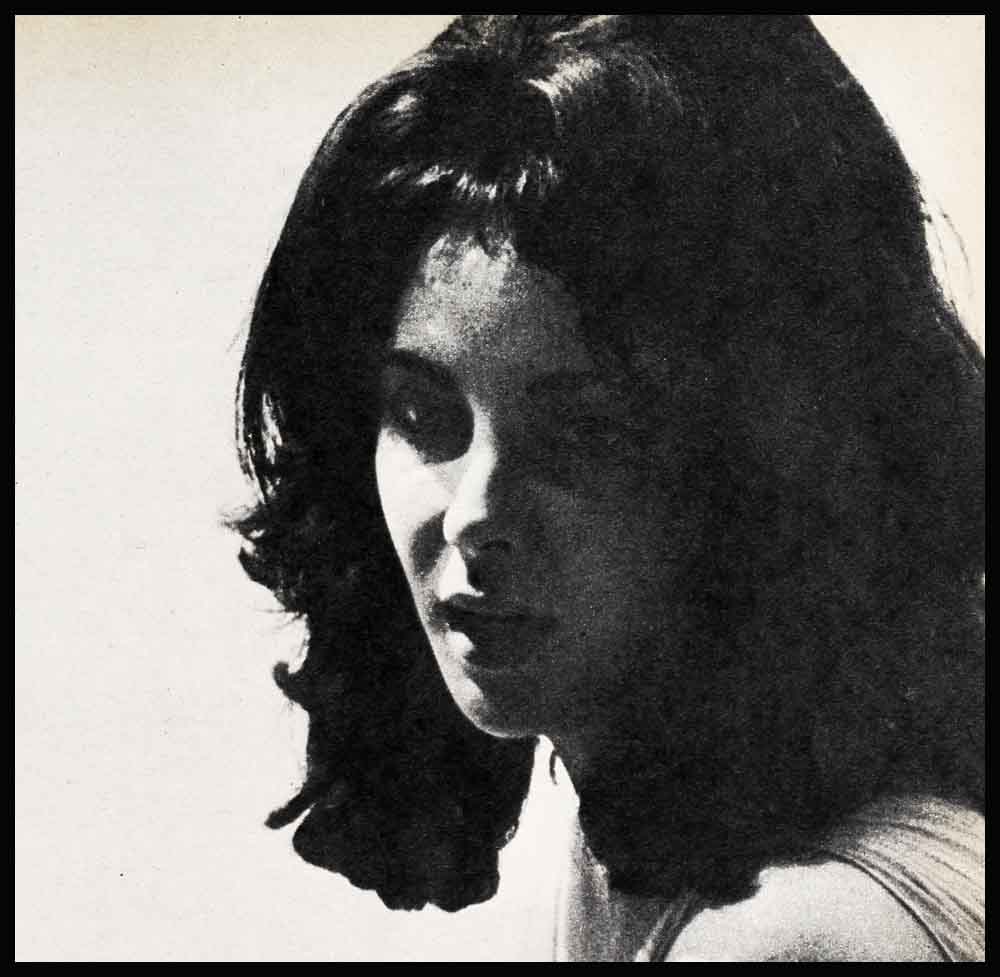 6 Clergymen Reveal How Liz Taylor Can Be Saved

“I refuse to condemn Elizabeth Taylor until I hear her story from her own lips. Despite all the publicity, despite the headlines, I will not believe the worst!” The voice, carried across three thousand miles of telephone wire between Hollywood and Photoplay’s New York office, was heavy and sad but still firm.

It was the voice of Rabbi Max Nussbaum—the man who converted Elizabeth Taylor to Judaism four years ago.

We had phoned him on behalf of the many baffled readers who had written to us about Liz’ status as a Jew since her affair with Richard Burton began. There were only a few letters at first, for Liz’ conversion to Judaism had been handled as discreetly as such matters can be for people in the limelight. But then, when Abdul Nasser refused to permit Liz to enter Egypt with the “Cleopatra” cast, many people suddenly remembered that she was of the Jewish faith. And the letters began to pour in—some outraged, some clearly the work of bigots, but many deeply puzzled and concerned.

“How can Elizabeth Taylor be such a good Jew and still behave the way she does? Does the Jewish religion approve of her scandalous behavior?”

“Didn’t Liz break her sacred vows as a Jewish convert? Is she still a Jew? After violating so many moral laws, can she be redeemed in the Jewish faith?”

“Doesn’t Liz have a spiritual advisor to tell her she’s a sinner?”

The answer to the last question was simple—and sad. Rabbi Nussbaum is Elizabeth Taylor’s spiritual advisor, but his hands have been tragically tied for the past two years. “Elizabeth has not been in touch with me since she went to Home,” he told us. “I only hope she will come to see me when she returns to America.”

A storm of controversy

But the answers to the other questions were not at all simple. In fact, Liz Taylor’s behavior since she adopted the Jewish faith has raised a storm of controversy among Jews themselves.

“The American Jewish Community,” Rabbi David M. Eichhorn (an active proselytizer) told us, “is greatly concerned about the matter of the conversion of non-Jews to Judaism. This is largely due to the unpleasant headlines created by the marital involvements of convert Elizabeth Taylor, and the divorce and death of convert Marilyn Monroe. To some Jews the misadventures of these more-to-be-pitied-than-scorned female Narcissi confirm the commonly accepted folktale that Judaism has never and should not now seek converts, and that converts to Judaism are in the main a liability rather than an asset to our religion!”

But in the opinion of Rabbi Robert Goldberg of New Haven, Connecticut, who instructed Marilyn Monroe in Judaism and officiated at her conversion ceremony, Marilyn did not in any way violate her vows or bring shame upon the faith she sincerely loved. “Marilyn was a warm, wonderful person whose memory should be treated with affection and respect,” he told us. “It was difficult for her to attend synagogue regularly; she felt her presence disrupted the services terribly. Even the fact that her funeral was non-sectarian rather than Jewish meant little; Marilyn left no instructions, and the services were arranged by friends. I believe that from her conversion to her death Marilyn had a strong, positive attitude toward Judaism, and to the best of her ability, she lived up to her vows.”

But what about Elizabeth Taylor? Can anyone say that she has lived up to her vows?

Here are some of the words Liz spoke in the simple ceremony which made her a Jew:

“I, Elizabeth, do herewith declare in the presence of God and the witnesses here assembled, that I, of my own free will, seek the fellowship of Israel and that I fully accept the faith of Israel . . .

“I believe that man is created in the image of God; that it is his duty to imitate the holiness of God; that he is a free will agent, responsible to God for his actions, and that he is destined to everlasting life . . .

“I believe that God rules the world with justice and love and in the fullness of time. His kingdom will be established on earth . . .

“I promise that I shall endeavor to live, as far as it is in my power, in accordance with the ideals of Jewish life . . .

“I further promise that should I ever he blessed with children, I shall raise them in conformity with the Jewish religion . . .

“May God strengthen me in these my resolutions . . .

Even in the light of subsequent events, no one doubts that at the time she took these solemn vows, Elizabeth Taylor believed what she was saying and fully in tended to live up to her promises. Liz’ own parents attended the conversion ceremony and expressed heartfelt thanks that their daughter had found a spiritual home at last. And Eddie Fisher testified later that Liz did not convert to please him—or, as has been suggested, as a memorial to Mike Todd. Indeed, no Jewish rabbi can accept a convert until convinced that he or she is motivated solely by conscience. Elizabeth Taylor had to convince Rabbi Nussbaum that she was both intelligent and sincere in her study of Judaism.

But what has happened since? Can one say that Elizabeth Taylor has been imitating the holiness of God, setting an example of righteousness, living in accordance with the ideals of Jewish life?

For a Jewish woman, those ideals can be summed up in one phrase: devotion to her family. Though some of Judaism’s most beloved rituals are the woman’s to perform—lighting the Sabbath candles, blessing the home—the rules of religious observance are carefully arranged so that nothing, not even religious services, takes her away from her family in time of need. Herman Wouk explained: “Our common law frees women from all commands that have to be performed at scheduled times. It does not ask the mother to put aside her infant and don phylacteries; nor the woman preparing the holy day feast to leave her work, on religious compulsion, and go to the synagogue.” As a Jewish wife and mother, Elizabeth was expected to live up to high standards—to honor her husband and bring honor to him, to make every sacrifice necessary to insure her children’s physical, mental and emotional well-being.

One of the things Elizabeth Taylor studied before her conversion is this poem from the Old Testament, which crystallizes the attributes of the Jewish woman:

“A woman of valor who can find?

For her price is far above rubies.

The heart of her husband doth safely trust in her,

And he hath no lack of gain.

She doeth him good and not evil

Strength and dignity are her clothing . . .

Her children rise up, and call her blessed;

Her husband also, and he praiseth her. . .

Can one suppose that Eddie Fisher’s trust was safe in Liz’ keeping, or that her children—dragged from country to country and school to school, exposed to the horrors of their mother’s publicity, deprived of any sort of emotional security, suffering the devastating effect of losing, without warning, the man they had learned to look upon as a father—were they being brought up in the tradition of self-sacrificing motherhood?

If it is true that Elizabeth Taylor has violated her conversion vows, as one Photoplay reader suggested, does this mean that she is no longer a Jew?

“As far as her being a Jew,” Rabbi Nussbaum told us, “nothing has changed.

“The Bible instructs us, ‘You must treat the convert like the native-born and love him as one of your own.’ So Elizabeth Taylor, as a converted Jew, is a member of the Jewish community.”

Unless, of course, she converts to an other religion.

Therefore, now it is up to Liz to make that community proud instead of ashamed, glad instead of sorry, to claim her as one of its own.

The way is clear.

To achieve redemption, according to the six rabbis who examined the problem, Elizabeth Taylor does not have to perform any act of self-abasement or undergo a penance; she does not have to make any sort of public confession; she need not even return to Eddie Fisher as his wife. But she must take what are, to a Jew, the three essential steps toward repentance. Then, and only then can she be redeemed.

She must confess privately to herself and to God that she has sinned.

She must give up the sin. (“If a man is guilty of a sin and confesses it and does not change his way, what is he like? He is like a man who holds a defiling object in his hand even while he is immersing himself in purifying waters. All the waters in the world will not avail him. He re mains unclean because he clings to his defilement.”)

And she must make whatever restitution she can to those she injured.

According to the six rabbis, Elizabeth Taylor must stop maintaining that her relationship with Richard Burton is a purely private matter of the heart and recognize it as a sin against her religion, her God and herself. This she must do.

She must give up Richard Burton.

She must make amends to the people she has injured—Burton’s wife and daughters, Eddie Fisher, her own children.

Can Liz do those things? Can she admit that she has sinned? Some believe her incapable of recognizing that any action of her own is wicked. Give up Burton? Not all the abuse of the world press, the pro tests of the Vatican, the pleas of her studio, not even Burton’s own statements that he will never leave his wife for her, have persuaded him to give her up. Not even his actual return to Sybil prevented Liz from tempting him back again. And can Liz—with the best will in the world—make any meaningful restitution to those she has hurt? Can she restore to two little girls their faith in their father? Can she give Sybil Burton an easy mind again? Can she make up to Eddie Fisher for the months when he was a public laughing stock? And what of the wounds inflicted on her own innocent children?

The way of redemption is not easy.

But it is possible. Liz’ adopted people stand with outstretched arms, ready to help her back. “If Elizabeth has any questions to ask,” Rabbi Nussbaum says, his voice full of compassion and hope, “I will try my best to answer them.”

And God, according to Jewish belief, will meet Elizabeth more than halfway. “Open the door of repentance even only the width of the eye of a needle, and I will open it for you wide enough for carriages and wagons to pass through.”

The rewards waiting for Elizabeth Taylor, should she find the courage to seek them, are great indeed.

A sense of oneness with the people whose faith she once fervently asked to share.

A hope of knowing once more the world’s respect, admiration and love.

The Jewish faith teaches that repentance is not only a necessity but one of the highest of virtues. “In the place where the repentant sinner stands, even the righteous who has never sinned cannot stand.”

Could one ask a greater hope . . . a greater reward? It is Elizabeth Taylor’s, for the asking.

Liz is in 20th’s “Cleopatra.” Her next film is MGM’s “International Hotel.”