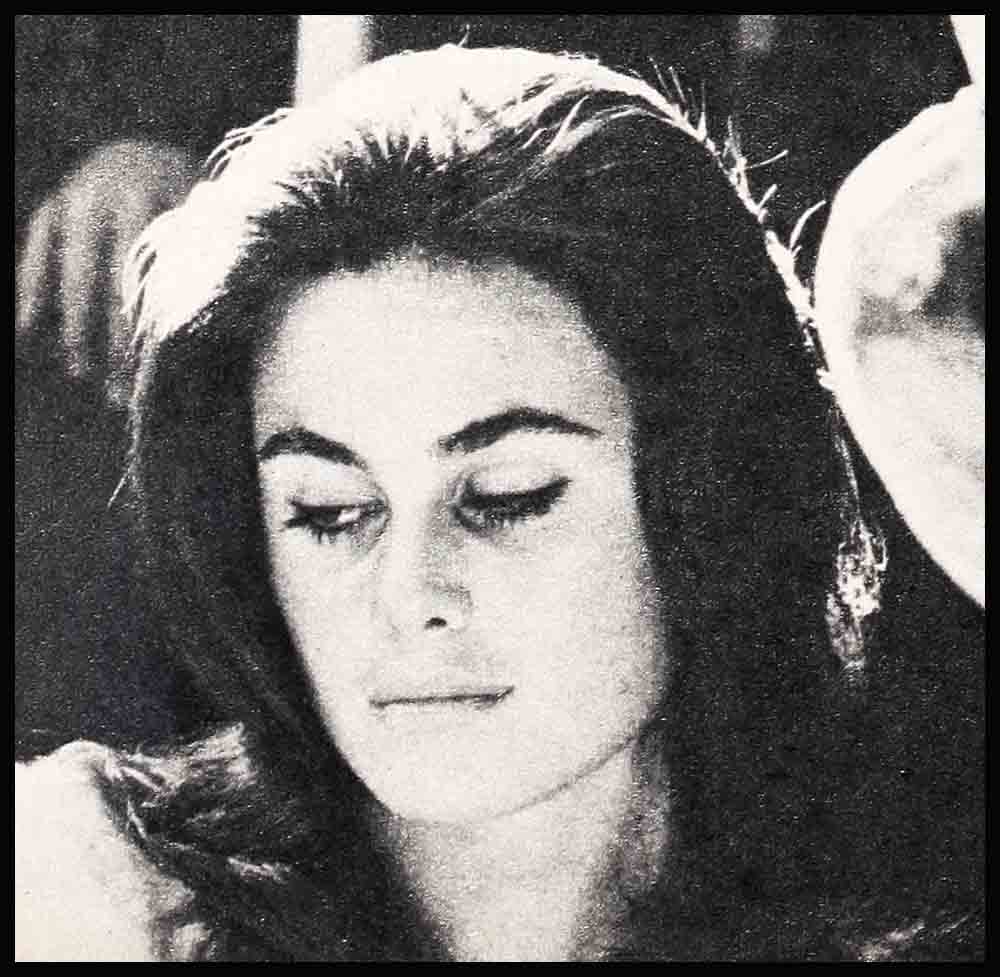 Miss To Mrs. To Mystery

“It’s just that there were certain conflicts we could not settle.”…This is Sharon Hugueny-seventeen and divorced-hedging a bit as she tries to explain the end of her short-lived marriage to Bob Evans. . . . Exactly what conflicts had sent a bride of five months so suddenly to Juarez for a Mexican decree? Sharon wouldn’t say. She would only insist there was “no bitterness on either side.”. . .The very naivete of Sharon’s brief statement put a shroud of mystery around the surprise debacle of the year. The mystery deepened when Sharon refused even to tell her own studio boss at Warner Brothers where she was calling from. She had phoned only to say that she would report to work in a few weeks time. She was coming back to the studio from which—only a few short months before—she had taken a suspension to be with her bridegroom in New York. . . . It was in late May that Sharon and Bob had been married. Now, in November, she was in hiding. İn May, Bob had been so eager for a teenage bride that he’d overridden her parents’ every objection to the match. In November, now that they’d parted, he evidently considered Sharon too much of a teenager to be trusted to talk about “what happened.” A Los Angeles newspaper reported, “The puzzling angle is that Sharon apparently signed an agreement in New York with Evans, just before her divorce, that she would not announce it-that anything about it would come from him.” Yet as of this writing no announcement, formal or otherwise, had come from Bob. And Sharon, except for her laconic call to her studio, stayed in seclusion. She seemed to want only to rest and keep out of the limelight. Those who knew the young girl’s deeply sensitive nature explained that she simply could not face her friends yet. But also knowing her wide-eyed honesty, they said she must be hiding out of respect for her “agreement.” Or perhaps it was a little of each.

Now, remembering how swiftly, surely and passionately the seventeen-year-old innocent and the thirty-one-year-old sophisticate fell in love, people ask: What happened between May and November? They ask it in spite of the eyebrows that were inevitably raised then, when a beautiful and inexperienced girl married a handsome, wealthy older man with a past full of love affairs.

It’s true, the Evans-Hugueny match came as a surprise. So did the events leading up to the hasty divorce. Yet there are at least certain glimmerings by way of clues to this deep mystery. . .

This was young Sharon

Sharon Hugueny was the product of a careful upbringing in a warm, close family. Like most teenagers, she often felt that her parents overprotected her, that they scrutinized her dates so critically that it was a wonder she still had any. But she never rebelled, never fought back. Instead—and this was also the typical teenager—she dreamed of love and marriage. In a remote, romantic way, not so very long before Bob Evans determinedly charged into her young life, Sharon tried to define the qualities that she wanted in a husband.

“My dream husband.” she said then, “would be a composite of all the best qualities of all the boys I’ve already met. And I’d want him to have the candor and natural tenderness of a young boy. A man without a touch of innocence would be too old for me to marry—whatever his age.”

It is interesting to remember that Mrs. Hugueny had put her foot down against a young man Sharon was very fond of—Peter Brown—for lacking that very touch of innocence. Or, to be specific, for being a divorced man. Peter and Sharon had met on the set of “Lawman” and an immediate attraction had sparked between them. They talked and laughed together a great deal, and Peter said she was “one of the most charming, spirited. fun-loving of girls” he’d ever met. He and Sharon were eager to date, but her mother said a very definite “No.” Divorce was against her principles.

Sharon never broke her mother’s ban on dating Peter, but they stayed good friends on the Warner lot. They became so inseparable that one friend said, “I think she’d be lost without him.” And another noted that her feelings for Peter were “very deep and tender.”

For her age, she seemed to think in surprising depth. She avoided the usual teenage cliches. She did not insist, “The man I marry must be tall, dark and handsome.” Instead she expanded on her theme, that hers must have that “small but wonderful trace of his boyhood innocence.”

“The years in numbers,” she said then, “have nothing to do with it. It’s what his years have given him—or taken away from him. If the years have given him compassion, understanding, tenderness, then these are the qualities that make up a fine man, be he twenty-five or forty-five.

“But if the years have hardened him, if they have driven him to cynicism—rendered him shockproof and destroyed the last trace of boyhood innocence, then he is too old for me, even if he’s only twenty.”

Was this the dream?

Peter Brown was twenty-five at that time. His liking for Sharon, nipped even before the dating stage, never developed into a romance. But he was a boy with a firm belief in marriage. After his divorce from Diane Jergens he had said, wistfully, “I loved being married—having someone to share a home with.” He spoke of the “pride and joy you feel working hard for someone you love and who loves you back and takes pleasure in what you accomplish.” Far from feeling cynical at the failure of his marriage, he only hoped for a second chance at happiness.

Whether Sharon was the dream girl or not, no one got to know. For on a beautiful day in late May, Peter was among the few close friends who joined the Hugueny and Evans families to watch Sharon and Bob take their vows. They stood under a flowery “chupah”—the traditional Jewish marriage canopy—in the garden of Bob’s palatial Hollywood home, the bride raised her veil to sip the sacramental wine, and her eyes were wet with tears. “Tears of joy,” said some. “Fear,” whispered others.

Whatever—all obstacles had been brushed aside. Bob, the “international charmer” had finally charmed the Huguenys out of their refusal to let a man of his age and worldliness marry their little high school senior. And her school had agreed to let her cram the final six weeks of work into two so they could marry now, and never mind graduation. Because now was when Bob could snatch the time between his million-dollar women’s apparel firm in New York—the fabulous Evan-Picone—and an important new job as an executive with 20th Century-Fox. He managed everything—the lovely ritualistic wedding and a short honeymoon to Hawaii.

No one has either questioned or explained why Sharon was married in the Jewish faith, by a rabbi. For though her mother had been Jewish before her own marriage, Sharon had been reared as a Catholic. Perhaps the only answer is that Bob wanted it that way. Her friends said she was such a giving girl that anything he wanted, she wanted. If he wanted her to turn Jewish, to raise their children in his faith, it was all right with her. When business called him back to New York, and Warners called her back to the studio for re-takes on “Majority of One,” she went to New York to be with him, and took the suspension. She wanted only to please him. Others said she did not want to travel to New York over the studio’s objections, she was afraid for her career, but she gave in to be a good wife.

What, then, did go wrong? There are only a few facts, and not many more rumors. Some people say that just as Bob had the divorce announcement in hand, so he has the rumors under control. But the mystery tantalizes, and so there are conjectures. Marrying in haste and repenting at leisure is one thing, say the guessers, but why did a whirlwind courtship blow up into a whir!wind divorce?

Some say it is obvious that Sharon must have been sharply disillusioned with Bob to give up so soon on what was to have been a storybook life: wealth, position, a home in New York, a home in Hollywood, and an adoring husband who would “carry her around on a cushion,” as one romantic put it.

What happened to love?

But there the conjectures begin. Disillusioned about what? Had Sharon discovered that the experienced lover was not the tender husband of her little-girl dreams?

Or had she found that in New York the glamorous actor gave way to the hard- headed business man who had made his millions before thirty? And to a busy man, even a bride had to come second to his business?

They say she was lonely in New York—was on her own most of the time and didn’t know what to do with herself.

They say she missed her mother and father and little sister painfully; that her mother had always told her what to do. and Sharon had obeyed; that now she had promised to love, honor and obey a husband instead—and you’d think the change-over in obediences would come easy, but it seemed to have confused her instead.

They say many things. They say Bob treated her like a child, not like a wife. That he showed her off and indulged her, but didn’t take her into his life. She was set down into a ready-made life and she wasn‘t expected to change it in the slightest—any more than she’d change the decor of the elegant apartment in which the man of exquisite taste had lived contentedly long before she came along.

But there are those who guess that the shoe might he on the other foot—that actually she was still a child. A brief wedding ceremony or even the reality of marriage and sex could not miraculously turn her into a woman overnight.

Perhaps when her mother had cried, “You’re too young, Sharon, you can t know what it’s all about!” she was right. Perhaps Sharon had over-estimated her own preparedness for a woman’s role. That could be why she cried so bitterly before they set foot on the plane for their Hawaiian honeymoon. Because suddenly she realized what she had done and she was afraid.

When they were first engaged, Bob had said with deep pride, “When I walk into a room with my wife, I can be sure that no other man in that room has touched her.” He prized her beauty, her intelligence and charm—and above all her enchanting seventeen-year-oldness—her innocence.

Now there are those who wonder: Can there be such a thing as too much innocence for the good of a marriage? Could it be even conceivably possible that it was Bob, and not Sharon, who was disillusioned in this May-to-November idyll?

But as we said—no one knows any of the answers. Sharon has gone from Miss to Mrs. to Mystery. No one knows if, back in Hollywood, back in her career, she will again be the girl who dates whom her mother advises; or if she will date whom she pleases; or if, until the hurt is well healed, she will want to date at all. For only one thing is sure: that to a tenderly- reared and sensitive girl, a divorce by seventeen must be the most painful thing in the world.

Sharon’s in Warners’ “Majority of One.”