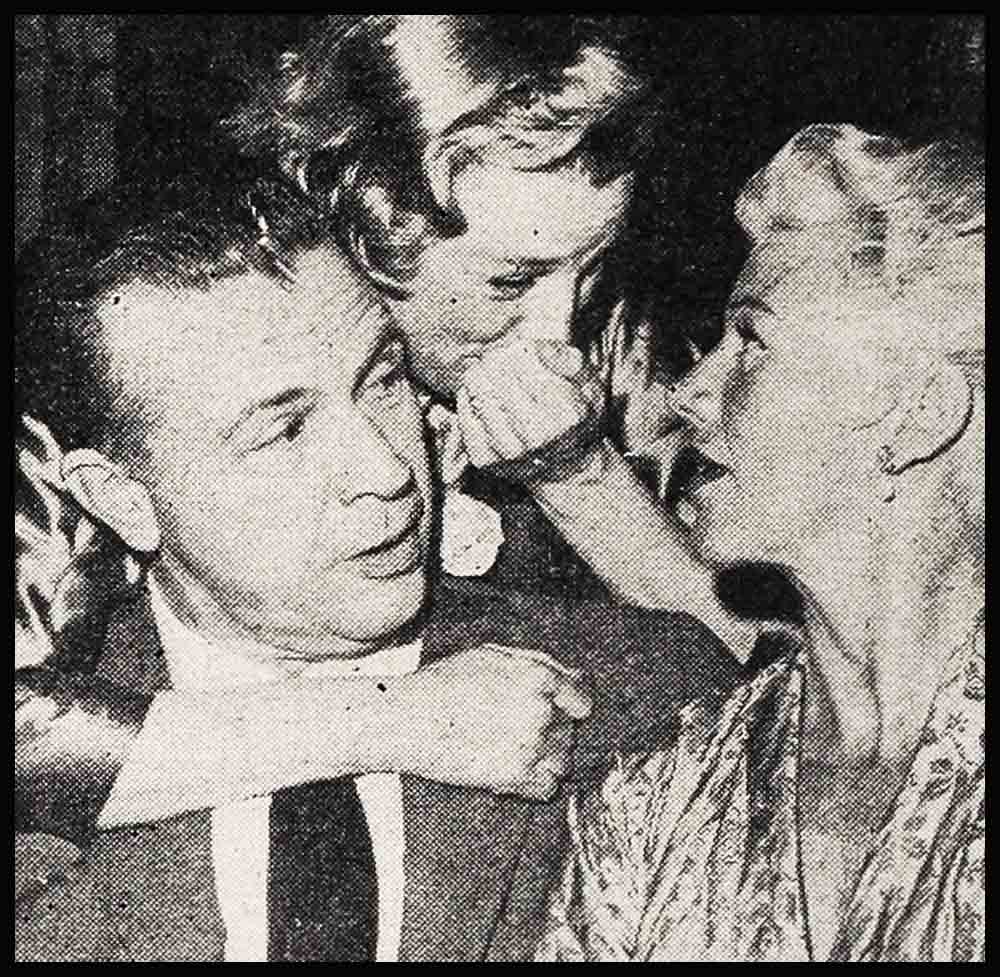 I’d say Kirk Douglas tries to be charming always and everywhere. . . . And that Cary Grant is always charming, without trying. . . . Not too long ago Lex Barker was quoted: “My highly publicized marriage to Lana (Turner) had everyone wanting to bet it wouldn’t last.” I like Lex. I hope he didn’t take too many of those bets. . . . Jean Simmons and Stewart Granger, to avoid arguments, have two television sets. . . . I’m so weary of reading articles about “The Real Marilyn Monroe.” Honest Marilyn will tell those pretenders that she doesn’t know The Real Marilyn Monroe. . . . Diana Dors, come back. All is forgiven. . . . Talking about sex bombs, Oscar-toting Dorothy Malone is going to find it hard to stay out of slinky dresses from now on—on screen, anyway. . . . On the set of “Loving You,” Elvis Presley greeted me with, “What’s been shaking with you?” I told him I thought he was the shaker, the wiggler. “I mean,” said Elvis, “what’s moving? Is your hi-fi putting out a solid message?” Anyway, I stopped Elvis and this jazz by inviting him to hear the latest Lawrence Welk record. . . . Don Murray is the most honest and sincere person holding a Screen Actors’ Guild card. In fact. you don’t believe he’s for real. . . . Jayne Mansfield insists she’s a shy girl. “I’m shy—but I got this fantastic build-up, and now I can’t let anyone see how shy I am.”

June Allyson’s slacks are sometimes baggy, but she’s still sexy in them. . . . Katharine Hepburn once told me that blue jeans never fit right until after they’ve been worn in the rain. . . . I think Ingrid Bergman should be ordered by law to make another movie immediately. . . . Anita Ekberg said it: “I like champagne. It’s so bubbly. I like bubbly things. They give me goose bubbles.”

I find Natalie Wood more interesting off-screen than on. I’m also the fellow who thinks Natalie is the best of the young, promising actresses. . . . Rita Hayworth listens to records while in bed. . . . Deborah Kerr is not temperamental, and explains why: “I’d never fight for a better dressing room. You can’t see the dressing room in the movie.” . . . Jose Vincente Ferrer y Cintron is the full name of Jose Ferrer. . . . Sophia Loren supposed to be the greatest Italian discovery since Gina and spaghetti. . . . Joan Collins is a swinger. Generally English actresses aren’t hip, but Joan is more typical United States than Grace Kelly. . . . When asked why he worked so hard, Gordon MacRae (movies, television, records, night clubs) replied, “I’ve got eleven people to support. Twelve if you count Uncle Sam.”

I know Shelley Winters is trying to find herself, but on the way she found Tony Franciosa. She seems satisfied. . . . Tony Curtis has stopped wearing those high tab collars. He looked like a con man. … A generation ago this nation was excitedly informed: “Garbo Talks!” Be prepared for the latest exciting information: “Brynner Has Hair!” . . . Mamie Van Doren is cooperative, willing, etc. As Mamie puts it: “I’m good-natured. I want people to look upon me as a sweet girl.” . . . Kim Novak had finished dancing with Mac Krim, and she turned to the orchestra leader at the Cocoanut Grove and said, “Would you please play the other side of ‘True Love’ for us now?” That’s Hollywood for you.