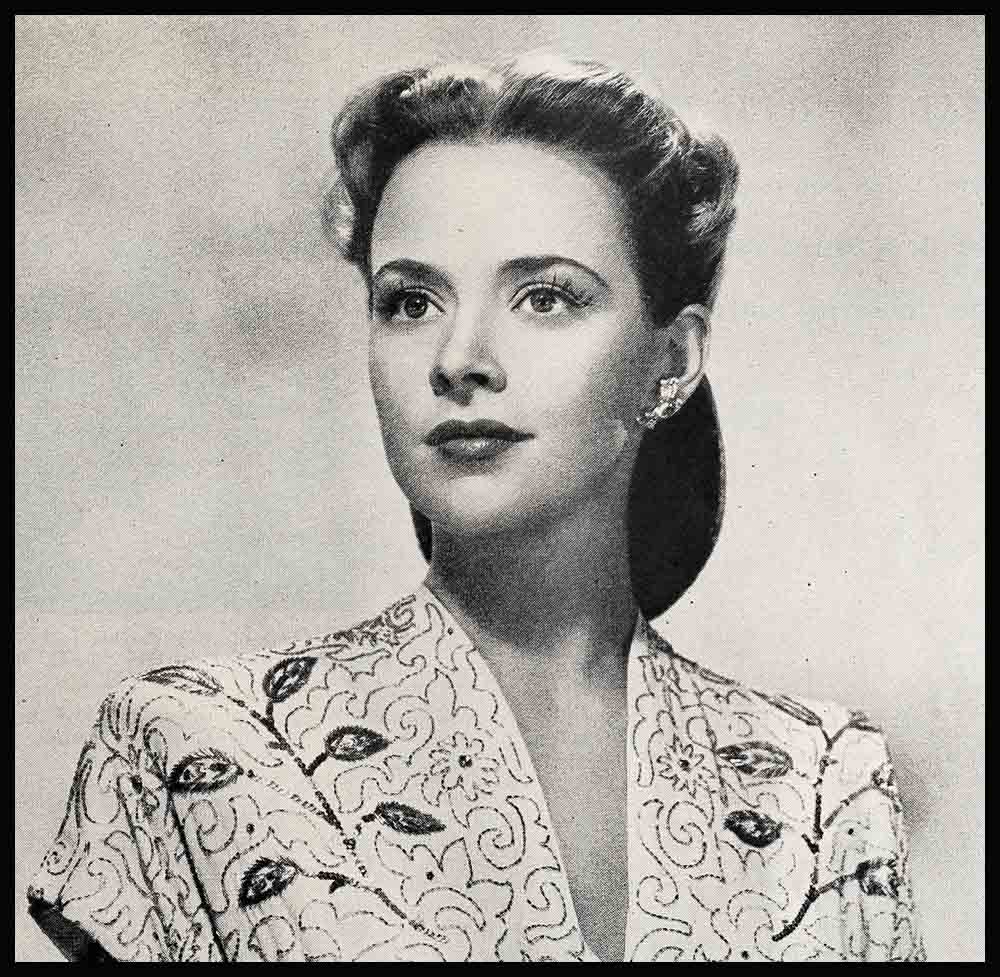 “You needn’t be afraid to talk frankly. I know I probably will never walk again. The Navy doctor told me in San Diego. I’ve had some little encouragement since I came back to Los Angeles. But I am prepared for what lies before me.”

The girl in the hospital bed barely made an outline under the covers, she was so slight. She was as delicate as Dresden—for since the terrible, shocking accident that paralyzed her from the waist down, Susan Peters weighs but a mere eighty pounds.

Yet there was courage there that blazed in every fibre of those eighty precious pounds. It’s the same type of unconquerable courage I’ve seen in those boys invalided back from the battle fronts. It lies like an armor on Susan, shining out of her big, wide gray eyes, in her completely feminine frilly bed jacket, in the little girl pigtails in which her hair is braided.

“I want to live,” she said in her steady, throbbing young voice. “There are so many things I can do. That’s why I am not giving up the fight. I mean, giving up inside!”

If I had thought, when I went down to the hospital—the first person outside her husband, Lieut. Richard Quine, her mother and Lana Turner, to see Susie—that I would have trouble controlling my emotions, I knew better now. I would have been ashamed to feel anything that even verged on pity for this girl who doesn’t know the meaning of it for herself. And she doesn’t want any of you who knew her on the screen and wrote her letters because you liked her work to weep for her.

“I’ve thought it all out,” she went on. “Things don’t happen just accidentally! There is a plan and a purpose behind everything. If at first I was bitter because I thought my career was over—just as it was starting—that is all past. There is much I can do, that I should do.

“For one thing—when the boys start coming back from overseas, some of them crippled just as I am, many of them will be afraid to face life, their loved ones—or to go home. I can talk to them—perhaps help them get jobs. I can help them find courage in the philosophies that have helped me. Maybe if they see and talk with a girl who has the same trouble they have, those boys won’t be afraid to face the world!”

I could have put my arms around her then and held her to my heart—but that is the thing Susan doesn’t want right now. So, I matched my mood with hers and said, “Thanks for letting me be the first to talk to you for an interview, Susie.”

“I wanted to see you,” she smiled. “Do you remember the first interview we had?” I laughed with her. She had come into my living room all dressed in red and with some new shoes she had bought. They were red, too, and they hurt her feet. I saw her making faces and trying not to show that the new shoes were making her wince. “Take them off,” I said. And take them off she did. From that time on, Susie and I were never on formal terms again.

She had just played that remarkable part in “Random Harvest” and was being hailed as the coming young dramatic star. A young Norma Shearer, they called her. She made a couple of other pictures, including “Song Of Russia” and then she met and married a boy she loved very much, Richard Quine.

It was a sweet church wedding with all the sentiment and laughter behind the tears that accompanies the union of two young people, unspoiled, deeply in love, two who have saved themselves for one another. Everyone said there was nothing but bright happiness ahead for Susie and Dick, for his career was on the upgrade, too.

Who could have suspected that even then the grim clouds were gathering?

The first blow was the loss of their expected baby. Susan had guarded the secret so closely and was so sensitive about it that even her studio did not know for weeks following an emergency operation, which almost cost her life, that she had lost her baby. There ensued months of recuperation, away from her work, while she tried to regain her strength.

Dick, meanwhile, had gone into the Coast Guard—but they felt lucky that he was stationed nearby in San Diego so they could be together on his brief leaves. The story of what happened that one fateful week end is too well known for me to repeat in detail. It was one of those freak accidents. Susan and Dick had planned a hunting trip. She picked up a gun, held it the wrong way and a bullet shot through her lung and abdomen, lodging in the spine.

“From the moment it happened,” Susan told me. “I have thought more of Dick than I have of myself. It is so terribly hard on him—he is so young. And so sweet. He is the most wonderful husband in the world. Do you wonder that I cannot feel myself unlucky when I know I have the love of such a fine boy?

“When they first took me to the Navy Hospital in San Diego there were no nurses for me because they couldn’t be spared from the wounded men there. So Dick nursed me every hour of the day and night—never leaving my side. He obtained permission from the Coast Guard, of course. He was so gentle. So thoughtful. But best of all, he was so cheerful, trying to make me think everything would be all right. Now we don’t pretend so much to each other—and we are stronger for it.”

I noticed even while I talked with her that she winced now and then with the pain and she grows tired easily. She is so completely honest about it that it bothers her that there is a rumor she is completely well and can walk around her room.

“God knows,” she said, “I wish it were true. But it is bad that such a false thing should be circulated. Many poor people who hear the talk of my miraculous recovery write to me and ask how it happened so quickly. One woman wrote me that she was the wife of a day-laborer and she had been paralyzed in her side. ‘I haven’t much money to get good doctors,’ she said, ‘but I will pay all I can to be cured as you have been.’ Of course, I write her and told her the truth immediately. I’m sure the columnists who circulated the rumors of my recovery just meant to be helpful. But the truth is better.”

She hesitated a moment and I could feel that she was beginning to grow tired. I knew I must be going soon—but she said she wanted to talk a bit longer. “I don’t have many visitors,” she smiled.

“I know that,” she replied. “My doctor, Dr. Prinzmetal, tells me the same thing and that I may get better. But I know that if I am ever able to walk again—it will be a miracle. I’m prepared.

“Most of the time, as I lie here, I go over my blessings and make my plans from them. Many women go through life never knowing real love. I have that. Many girls are frustrated in their careers and never get to touch the hem of their goal. I had a wonderful career—if just for a short time. I have the love of a wonderful mother.

“And friends—I’ve never known how marvelous they can be until now. Believe me, I would never work for any other studio than M-G-M. If it weren’t for them—keeping my salary going all this time—I could not have all this comfort and attention and medical care.”

For a moment a slight shadow seemed to cross Susie’s face. “I would have loved to have had children,” she said softly. “You know how I felt when I lost my baby. But later on, Dick and I would love to adopt a baby. They brought a little colored baby for me to hold at the Mercy Hospital—and it was so sweet.”

There wasn’t anything I could say to that. I’ve never been so touched in my life. But I did manage, “Susan, I’m not trying to build your morale when I teli you that I happen to know from Louis B. Mayer, himself, that the studio expects you back to make a picture.”

“Do you really think I’ll ever make another picture?” she asked, just as a child would put the question. “I want to more than anything in the world. But it is wrong for me to dwell on it. There are other places for me besides the screen. Radio I could do. I could sell something on those morning programs. Of course, I’m not a very famous actress—but I have a trained voice and I feel I would like to talk to women about things that would help them. The thing I have learned best out of all this is the feeling I want to help other people.”

What greater lesson can life teach any of us than to “love thy neighbor as thyself”? This little twenty-three-year-old girl has learned it from hours of pain, from sleepless nights and from days spent trying not to let her husband and mother know of the agony that racked her little body. But through it all she kept the gift of gentle laughter.

Just as I was preparing to leave the telephone rang. It was Dr. Prinzmetal. I answered the phone and heard his laughing voice saying, “Get out of bed, lazybones. You’ve been in bed long enough.” I realized he was kidding Susan, of course, thinking he was talking to her.

“This is Louella Parsons,” I said with mock dignity.

Susan held her sides with laughter. “He’s that way all the time,” she laughed.

I could hear that laughter following me as I walked down the hall before the automatically-controlled hospital door closed. It was the genuine, real laughter of a twenty-three-year-old girl who had so much in life, lost it, and who had recovered such wonderful new values. As I went away I had the feeling that I wished all troubled, afflicted people could see Susan and talk with her.

For I believe in my heart that in this instance, courage is a girl named Susan.