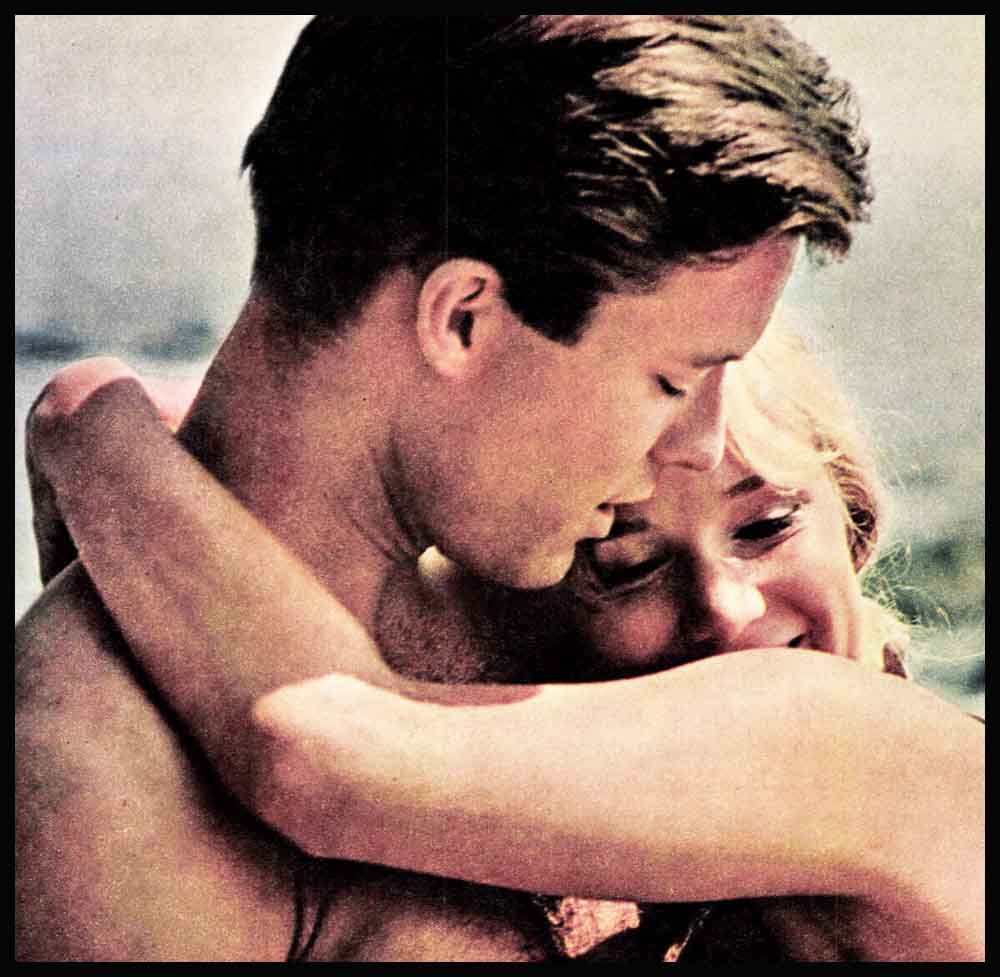 The scene was the Shrine Auditorium, a cavernous mosque in a run-down neighborhood south of downtown Los Angeles. It was almost curtain time of an exciting cultural event. The great Joan Sutherland was appearing with the San Francisco Opera in Bellini’s “La Somnambula.” While the opera was no great popular favorite, the appearance anywhere of the Australian soprano meant capacity audiences. As the well-dressed crowd pushed to- ward the entrances, a young couple walked through the massive arches and tried to assume the anonymity of the throng. It was not easy for the young man, since his is one of the most famous faces in America. “Hey, look— it’s ‘Dr. Kildare,’ ” a coed from nearby University of Southern California remarked to her date. “Yeah?” answered the bored young man. “Who’s the dish with him?” The college girl couldn’t identify the willowy blond beauty who clutched the arm of Richard Chamberlain. The throng continued pressing into the lobby and then into the huge auditorium, where the lights were dimming for the overture of the colorful Bellini opera.

During the intermissions Dick Chamberlain drew many stares but was spared the clamor that marks most of his appearances in public—opera audiences are inclined to be conservative. Few of the onlookers could identify his date, which was remarkable, since she is famous in her own right. She was Yvette Mimieux?

What was so unusual about the date of Dick Chamberlain and Yvette Mimieux?

It was the first date they had had together and it marked the start of what gave promise of a warm and perhaps lasting relationship. It also meant that Dick Chamberlain was dating a girl who—as far as the best intelligence can determine —is a married woman.

The statement must be qualified, and thereby hangs one of Hollywood’s most curious tales.

Because of her mystery over the marriage and the possible divorce, a cloud has been placed over the propriety of her budding romance with Dick Chamberlain.

As Yvette became more and more prominent, rumors grew that she was married. She steadfastly refused to discuss her personal life, and only her family and a handful of friends knew where she lived and how.

Then a Los Angeles newspaper came up with a revealing story.

A marriage application had been filed on December 11, 1959, in the San Fernando office of the city clerk. It had been signed by Yvette Mimieux, age seven-teen, whose mother was listed as Carmen Montemayor, born in Mexico, and father, Rene A. Mimieux, born in England. The other party to the application was Evan Harland Engber, age twenty-two, whose father was listed merely as Herman Engber.

Further research at the Los Angeles Hall of Records revealed a marriage certificate reporting that the marriage had been performed December 19, 1959, by a Unitarian minister, the Rev. Stephen V. Fritchman.

Even in the face of such overwhelming evidence, Yvette remained mum. She refused to confirm or deny.

“Apparently you are married,” a re- porter once said to her.

“Whether that is apparent or not is up to you,” she replied blandly. “I can’t help you with it.”

Pressed for an explanation, she commented, “I feel very strongly about this. I have seen people in Hollywood destroyed by living their lives in public. If it comes to the point where I have to do that, I’ll quit acting. I hope I don’t have to do that, because I love to act.

“But more important than that is my self-respect, my own sense of dignity. If I can’t preserve that, then all the rest doesn’t mean a thing.” This was final.

Some of the more cynical observers in the movie Capital read other factors into her motivations. Since she was fifteen, Yvette’s career has been guided by James Byron, the man who gave the world Jayne Mansfield. Publicity-man Byron had created Mansfield into a household name of sorts by having her participate in every publicity gimmick that has been tried in Hollywood history. Observers saw the Mimieux buildup as reverse-Mansfield: the Garbo technique.

Whether Byron-inspired or no, Yvette’s passion for shunning the spotlight on her married life remained firm. Scarcely anyone knew of her life as Mrs. Evan Engber, wife of a graduate student of psychology. Hence virtually no one knew the details of how the marriage broke up—or whether it did!

Yvette’s attitude to inquiries was simple: since she’d never admitted marriage, how could she disclose a separation?

But the external evidence was clear. Engber, who unobtrusively met Yvette at the airport when she returned from movie tours and locations and was there when she departed, no longer appeared.

And Yvette began dating. First it was George Hamilton, who escorted her to the “Cleopatra” and the “Victors” premieres.

Dick and Yvette had known each other for three years, both having been under contract to M-G-M. They had even appeared on a television show together, the Arthur Freed special on which Dick sang for the first time.

But theirs was only a passing acquaintance until Yvette was cast in a “Dr. Kildare” show. She was to play a California girl whose love of surfing was so great that she disregarded the danger of her ailment, epilepsy. In the end it led to her death by drowning.

The show required both Yvette and Dick to surf, and so they went to Malibu to take some lessons in the precarious sport. Both are agile and they soon learned how to stand on a board while the wave carried them all the way in to shore.

They also learned the lore and language of the surfers, including how to tell a hodad (a non-surfing beach bum) from a hot dogger (an accomplished surfer).

Exhilarated by the surf and sun and the thrill of catching a big wave, Dick and Yvette enjoyed themselves tremendously. They found they worked well together, too. Both are intensely serious about acting, and they studied their lines in each other’s dressing rooms before scenes.

Is Dick in the dark?

It was inevitable that they would think about dating after the filming was over. Dick came up with the proposal that they go see the Bolshoi Ballet. Then came the opera date—a natural, since both love the opera.

“Dick is divine!” Yvette gushed to an intimate the following day. “He is wonderful company—such a good sense of humor. That’s a side of him that most people don’t sec.”

“A fascinating girl,” Dick remarked about Yvette with customary reticence.

But isn’t she married?

“I don’t know anything about that,” he said, indicating that if she had been married, or if she was still married. he was either in the dark, too, or—and this is more likely—going along with Yvette’s wishes to keep her private life private.

Friends believe that Yvette might be just the girl for Dick at this stage in his life. Said one of them, “After three years of ‘Dr. Kildare,’ Dick is beginning to lose some of his shyness. He realizes now that he isn’t just another struggling young actor. He only has to go out in public to know that he is a star of immense popularity.

“This hasn’t made him conceited at all. But it has removed some of the insecurity and inhibitions that he had. He’s more confident.

“He also wants to enjoy some of the fruits of his labor. He has worked like a dog on the ‘Kildare’ series, not only sweating on the set every day, but making records, going on publicity tours and doing a feature. Now he wants to have some fun.

“Before. he was content with occasional dates with Clara Ray; she was a sweet girl and she shared his interest in music. He still sees Clara, but he’s also branching out. His first fling was with Jane Fonda. No w he’s interested in Yvette Mimieux, and she’s a good match for him. She’s a bright girl, but she’s also a bit of a kook. and that’s good for him right now.”

Will the dates develop into a romance?

It’s highly probable. But a romance would run smack up against an obstacle: Yvette’s marriage.

It is fairly safe to surmise that she has not yet been divorced from Evan Engber. She was able to keep her marriage anonymous because she was not yet famous. But now that she is a star, it would be virtually impossible to get a California or Nevada divorce past the watchdogs of the press, and even a Mexican divorce would be fairly certain to hit the papers.

As a result, to shed her husband Yvette would be placed in the curious position of having to admit that she had one. That is a step that would be painful for her to take.

But love conquers all, as some joker once said. And if true love does develop between Yvette and her favorite television doctor, she may have to make an official end to the marriage that never was.

But then, stranger things have happened in Hollywood.