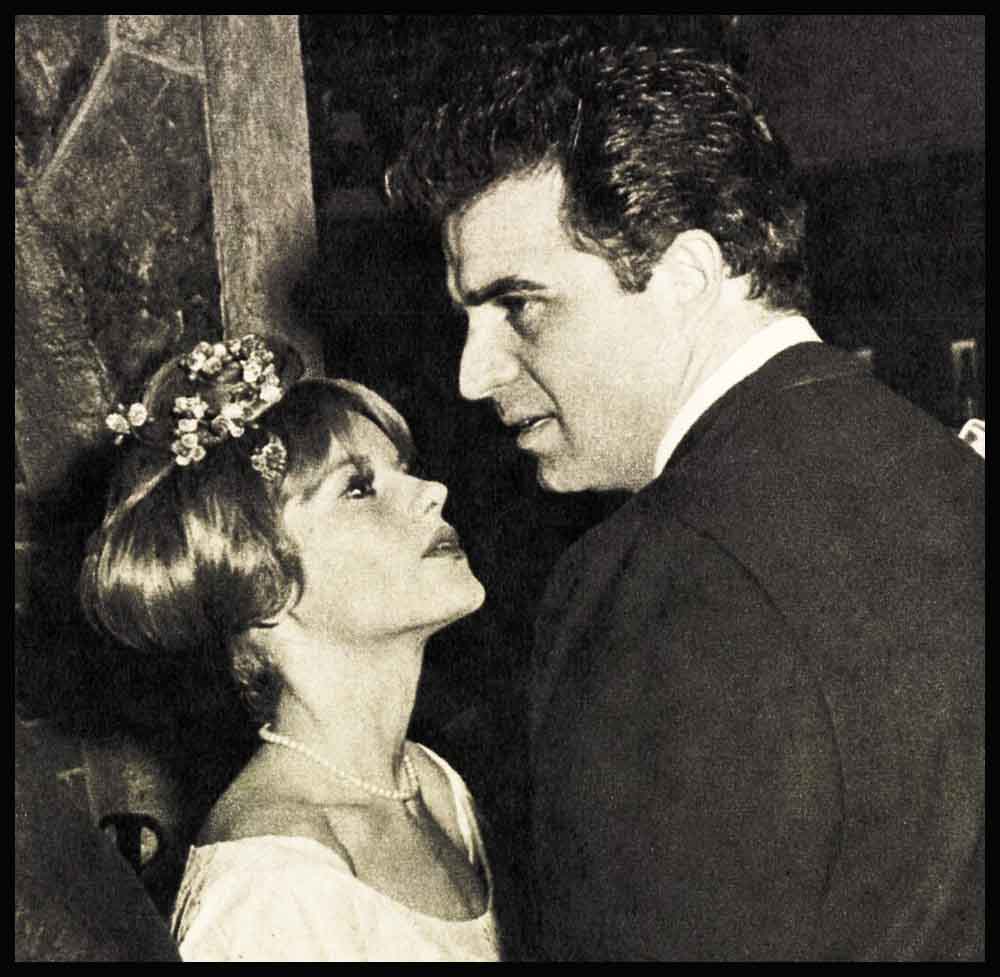 An Extraordinary Interview With Sharon Farrell

“You wouldn’t believe the things that have happened, the things Sherry has said about Vince. Yet, I’ve never heard him say an unkind word about her. In fact, he’s told me, ‘I love her in a way.’ But Sherry has come to my house and phoned me and screamed at me and called me names. Really she has!”

This was Sharon Farrell speaking —the bright, vivacious blonde who’s replaced Sherry Nelson in Vince Edwards’ heart. Once married to Andrew Prine, Sharon is now rumored about to marry Vince. In Hollywood there is, of course, only one way to check a rumor—and that’s to ask the per- son who is involved. Photoplay found Sharon on the “Wagon Train” set at Revue Studios to ask if the gossip was true. The simple question seemed to open the way for an outpouring of memories, hopes and philosophizing. Sharon spoke ever-so frankly of Sherry, tenderly of Andy—and even more tenderly of Vince. And with almost shocking honesty about all three.

“No,” Sharon said, “Vince and I aren’t engaged, but we are very good friends. We’ve seen each other regularly since I appeared in a ‘Ben Casey’ episode about a year ago. I don’t know now what it will lead to or how it can work out. Of course Continued from page 39

I know he dated Sherry for a long time—it was four years—and then they didn’t marry, and the same thing could happen with me. But if it did, I wouldn’t feel that he had wasted my time. I never feel that people are wasting the time that they enjoy spending together. And it’s not unfair to the girl, because she’s gone along with it.

“Anyway, it’s a man’s prerogative to decide when he wants to get married. I have friends who take the aggressive role and say to the men they date, ‘You’ll marry me now—or else.’ But I don’t believe in that.

“I went with a boy for four years, and not a minute of that time was wasted. We were very good for each other for a long time. Then we married, but it didn’t work.”

That was Sharon’s first, oblique reference to Andy. But it was not her last.

“Vince isn’t in a position to get married now,” Sharon continued, “and he won’t be until he settles his problems. Oh, yes, he can afford to marry all right, but he has a lot of things on his mind—things he hasn’t made up his mind about.

“For one thing, he has to understand why he needed the relationship he had with Sherry. I hate to see what she’s doing to him—I guess I don’t mean that, because nobody does anything to any- body—we do it ourselves.

“I understand what Sherry is going through. but I don’t want to get into one of those triangle situations. She’s been hurt, and I know what that’s like, because I was hurt very badly—very badly—when Andy ran away to New York. I guess everyone has been hurt.”

Sharon didn’t explain what happened “when Andy ran away to New York,” but she must have been remembering his trip East that ended their marriage. It was from New York that Andy called her to suggest a divorce after they had been married only six weeks.

(Andy once told an interviewer about the bleak moment when he realized divorce was inevitable. He said, “I went to New York on business and called Sharon from there. I knew she didn’t love me—not really. Neither of us really wanted to be married to the other. We’d gone together for four years—but after six weeks of marriage I told her that I thought we both wanted out. She said at first that she didn’t, but then she went to see a lawyer and began divorce proceedings. It’s hard to say who took the initiative to end the marriage. She got the divorce, but I had suggested it.”)

“I was saying to Vince,” Sharon now continued her reflections, “ ‘God bless Andy!’ I mean that I hope God blesses him for setting me free. You see, I never would have left Andy. Never, if he hadn’t realized, before I did, that we weren’t in love any more. Love can be over, but you have to be hurt before you can believe it.

“I sat at home when Andy went out with other girls.” Sharon seemed to be remembering those four years of dating before she and Andy married, but she wasn’t explicit. “I wondered, ‘What kind of masochist am I that I let myself suffer like this? What’s my problem?’ When a girl is willing to go through this, she has a problem. I tell you, I get scared when a man is too nice to me. Or that’s the way it’s been. I get scared when a man says, ‘I love you.’

“Isn’t that terrible? But I’ve been going to a doctor, and now I’m beginning to understand myself better and work out my problems. A lot of people need a lot of help, which explains why Andy and I couldn’t stay married and why Vince and I can’t think about marriage.

“Andy and Vince are so very different. Andy is—or was—more immature than Vince. I haven’t seen Andy for two years, but he was so warm, easy going, charming, delightful, boyish.

“When I was seventeen, I thought Andy Prine was a God. But he never wanted to do anything except act. Vince, on the other hand, doesn’t want to be an actor forever. He’s interested in directing.

“Vince, though, doesn’t like crowds and doesn’t trust people. He’s afraid of what they’ll do to him. Andy always liked parties and lots of friends.

“Vince and I get into conversations and talk for four hours like very good friends. I’m just getting over Mr. Prine, myself. Vince has been very sweet and patient with me. He’s got a real good heart.

“Vince has started going to my doctor. He has this problem with Sherry which he will have to solve, because I don’t want to play mother anymore. I want a man!

“I’m being courted by Vince—really courted—and it’s just wonderful having him send me flowers and candy. And Vince is enjoying it, because he hasn’t been able to take this kind of initiative in courtship before. Sherry made decisions for him.

“With Andy—well, I was only seven-teen when we met. Being in love when you are seventeen is partly being away from Sioux City, Iowa, for the first time. It’s puppy love. rebellion against your parents; it’s wanting to play house.

“However, there’s another kind of love I’m just beginning to learn about without that neurotic pain in your stomach you get when you are seventeen.

“I read a story about the divorce. Andy’s and mine, and I thought it was very compassionate. It was very sweet of Andy to speak of me the way he did.

“At first we were hurt and probably said angry things about each other, but I have a great regard for Andy, and I’m so sorry for him now. I really am.

“I never knew Karyn Kupcinet. I never even saw her, but I know Andy has been going through a terrible time. (Andy was steady-dating Karyn at the time of her mysterious death.) I’ve been hurt by the things people have said just because I used to be his wife, so I can imagine what Andy has been suffering.

“I do, I really do feel sorry for Sherry. She’s torn Vince down, because she’s hurt, but Sherry is an unusual girl. She has a lot to offer.

“If that happens, I honestly won’t be bitter, even though Vince means a lot to me.

“You never know about life, and that’s why it’s so exciting.”