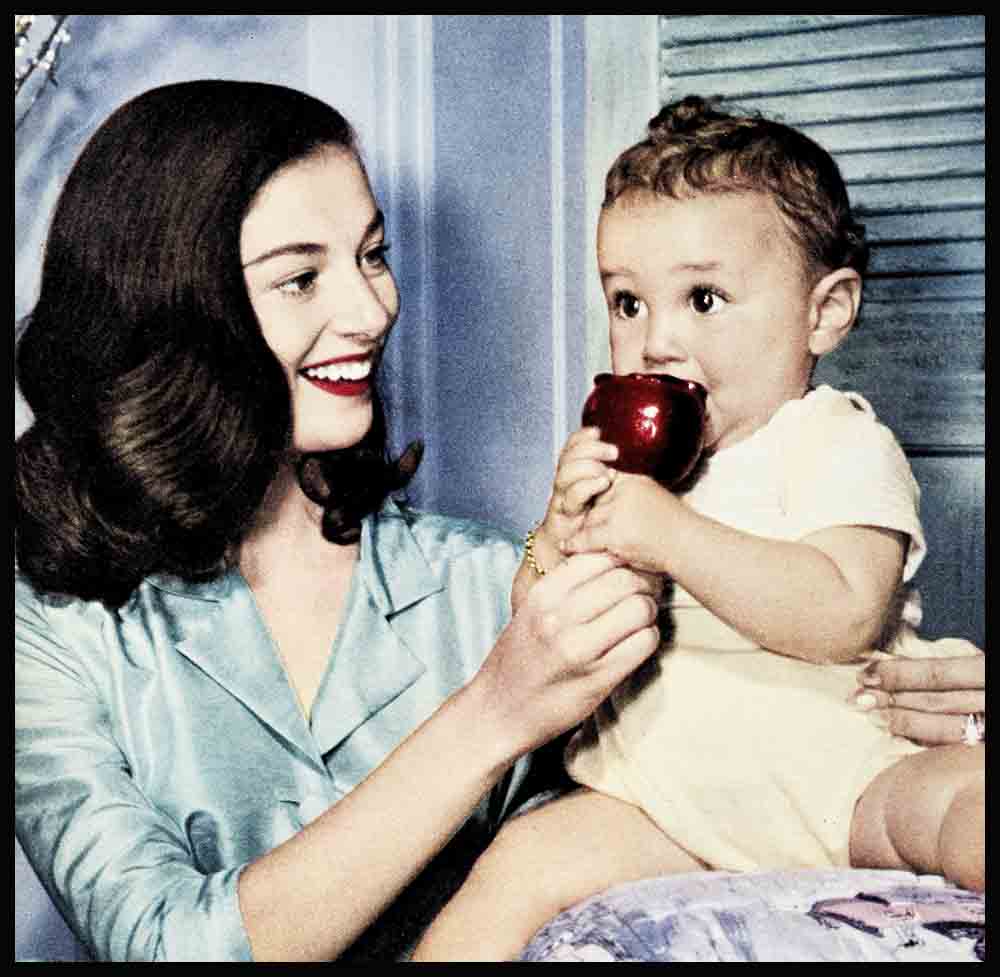 It has been written that sorrow shared is the anvil upon which great loves are forged.

There is heart-wringing proof of this in the love story of Pier Angeli and Vic Damone. In their brief two and a half years of marriage (they were married November 24, 1954) these two young stars have faced more problems—some of them near tragedies—than many others meet in a decade. And with every challenge they have grown more deeply in love. Just seeing them together, or with their adorable year-and-a-half-old son Perry, is enough to convince any skeptic.

The first, and worst, of the newly married Damones’ trials was the freak plane accident in which Pier suffered critical injuries just four months after her marriage. Pregnant with her first child, Pier was on the way to Palm Springs for a holiday. Vic had rented a beautiful house for her in the desert community, and had exacted her promise to do nothing for a month except lie in the sun and rest. Meanwhile he would be in Chicago filling a night club engagement.

That month, and many more, Pier was destined to lie not in the sun but in a traction bed in the hospital. Her pelvis was fractured in two places, her face and head bruised and cut, her nervous system shattered by a fear that the accident had harmed her expected baby. Vic was at her side within hours, and there he remained, contracts notwithstanding, until his wife was pronounced out of danger. But twice in the pain-filled months after Pier had been allowed to go home, they almost lost the child which by this time, as Pier says, “was everything, my whole life.” Each such crisis meant more fear-shadowed weeks of hospitalization.

‘‘But God wanted us to keep our baby, and we kept him,” Pier says, not triumphantly, but with grateful reverence.

Early in her pregnancy Pier confided to her doctor’s nurse that she knew nothing about the birth process. The nurse, who had grown deeply fond of the young bride, proceeded to educate Pier on the subject. First she gave her a simple, reassuring little book to read called “Expectant Motherhood.” When Pier had thoroughly digested it, the nurse gave her some more involved medical material.

“I have always been fascinated by medicine,” says Pier. “I have an uncle in Rome who is a distinguished surgeon, and I think, if I had not been a girl, I would have wanted to study medicine myself. Reading about babies was more fascinating than anything I had ever studied before.”

After the plane accident and as soon as she was discharged from the Palm Springs hospital to take up the wheelchair and crutches which were to be her constant companions until the time of delivery, Pier started pestering the doctor to take X-ray pictures of her child. “I have to know that the baby is all right,” she implored.

“Not until the seventh month,” her doctor insisted. “Until then you must be patient.”

Pier was anything but patient. She called the nurse daily to say, “I think the baby moved too much,” or “The baby isn’t moving. Are you sure the doctor heard the heart beat when he examined me last?”

Finally the seventh month arrived, and the X-rays were taken.

“You’ve heard about people carrying baby pictures in their wallets,” Pier says. “Well, Vic carried those big X-rays around. He showed them to all the crew men at the studio, and bragged about how big and beautiful his son was going to be.”

Vic knew he would have a son. “Somewhere or other,” says Pier, “he had heard a story about girl babies having fourteen ribs and boys only thirteen. He pored over the X-rays with a magnifying glass, and was absolutely convinced that our baby had only thirteen ribs. He even called his uncle, a physician in New York, and shouted, ‘It’s going to be a boy!’ ”

And so it was—with the usual number of ribs, however.

The baby arrived on August 21, 1955. Pier endured twenty-eight hours of labor without sedation. “I begged them not to put me to sleep. I had to know when my baby came.” Then her doctor insisted, for the child’s sake, that the birth take place by Caesarean section.

“But, please, don’t put me to sleep,” Pier implored, “I want to be conscious when it comes.” The doctors agreed, giving her only a spinal anesthetic.

“I knew when the baby came!” she says. “The whole world was gold.

“Even when I was still in the hospital,” Pier says, “I knew how special Perry was. He was the biggest baby in the nursery—nine pounds!—and so beautiful. all pink and white, not red at all, and not a single wrinkle. He looked like a rose.”

Vic went down to look at him every time he visited the hospital. Then he came back to Pier’s room to report how all the other fathers wanted to take pictures of their own new babies with “that beautiful Damone boy.”

Two days after Perry was born, Pier herself was allowed to climb into a wheelchair and roll down the corridor. She wanted to have a look at Perry through the soundproof nursery glass.

“I was so proud,” she recalls. “But I was thin. Vic said I looked all eyes, like a lost bird. And there were those other women, all bigger and healthier looking than I, I could just hear them thinking that Vic must be nine feet tall!”

That same day the nurse brought Perry to Pier’s room so that his mother could give him his bottle for the first time.

“I didn’t know anything about babies or the funny faces they make when they have little gas bubbles. Perry drank some of his milk and then his face crinkled up and I handed him quickly to the nurse and telephoned Vic at the studio.”

“Darleeng,” she cried over the wire, “the baby smiled at me!”

That night Vic insisted that he, too, be allowed to give the baby a bottle. Sure enough the same thing happened.

Vic went on the Peter Potter television show later that night, and when asked how his two-day-old son was doing, replied “He smiled at us!” The whole audience broke out laughing.

The Damones learned quickly about babies, and by now, of course, are experts.

The Damones brought their child home to a brand-new house on a mountain-top, purchased by Vic as a surprise for Pier. But then began the series of separations, the almost inevitable grief to which young couples must resign themselves if they work in the motion picture industry. Soon after little Perry was born—too soon, in the light of Pier’s precarious health— Pier was ordered to London, alone, to play the feminine lead in “Port Afrique.”

Vic and Pier had only a brief month with their new son before Pier was air-bound for location. The shooting schedule took an endless three months.

Although Vic twice flew to Europe to spend short periods with his wife, and once managed ten days in Beverly Hills to be with Perry, he was tied down to New York most of the time for TV filming. Pier herself had to miss Perry’s first Christmas, and although every inch of her hotel room in London was covered with pictures of the baby—taken by Vic—she wept with frustration and homesickness.

Back in Hollywood Pier was rushed directly into “Somebody Up There Likes Me,” and then to Paris and Rome for “The Vintage.” Originally the plan had been to shoot only the exteriors in Paris in a brief twenty-three day schedule. But Paris interiors were too good to be passed by, and the twenty-three days stretched to three and a half months. Vic visited Pier in Paris and they flew to Rome for a few weeks holiday, but Pier was too exhausted to enjoy it very much—and she wanted to be with her baby.

Perry learned to walk while Pier was still away. She missed his first birthday. Again she wept, and by now homesickness was compounded with fatigue and tension. The year’s events had been almost too much for this slip of a girl, just twenty-one. Her normal 105 pounds had now diminished to ninety-seven.

When Pier returned from Europe with Vic, late in the autumn, she looked down from the plane’s debarking stairs and glimpsed Perry in the arms of his nurse, Adrianna. They were waiting near the customs house fence. Shaking, Pier clutched Vic’s arm. “I don’t think I can go down,” she said. “I don’t think I can stand it.”

But she could, and she did, and she tore through the customs routine and out to the gate. There was Perry holding out his arms to her and saying, “Ma-ma, Ma-ma.” Pier grabbed him and cuddled him, and once more “the world was all gold.”

There have been many of these golden moments since her marriage, mingled with the painful ones. The most recent blow, of course, was a miscarriage, a tragedy which struck without warning just before last Christmas. Pier was alone again, Vic having gone to New York to open a Christmas season engagement at the Waldorf-Astoria.

With Vic calling frantically every three hours, Pier, at the hospital, was begging her doctor to let her go home to be with Perry. The doctor had wanted her to rest for at least a week, but Pier insisted that her son needed her.

“I will be happier at home and get well faster,” she said. “Please let me go home.”

“Go home then,” the doctor conceded.

Back at home, with Perry to hold in her arms, and with Vic calling frequently to hear of their son’s newest accomplishments, Pier was able to shake off the depression caused by the lost pregnancy and concentrate on the child who was living. “Every day he learns new words, both in English and Italian,” Pier reported to Vic, who never tired of hearing about his son’s achievements.

Pier made Christmas joyfully memorable, even though Vic was not present to share it. There was a lovely tree, high on a table so that the fascinated Perry could not pull it down.

“Marisa came and Jean Pierre and my mother, and when Vic called to say ‘Merry Christmas’ just before going on for his performance, we opened a little bottle of champagne. For luck I put a few drops on Perry’s head, and we all felt warm and loved and lucky.”

Despite their many separations, despite their most recent loss. Pier and Vic have felt lucky, tremendously lucky, ever since Perry was born. Mostly, when they teli the story of the past two and a half years, it is a happy story. Because there were joys along with the heartache, the growing love of two people for one another, and a wonderful baby.

“We’ve had problems, of course, but we’ve worked them out together,” Pier says. “And we have been given so much.

“God will want us to have another baby,” she adds with conviction. And you know, somehow, that God will.