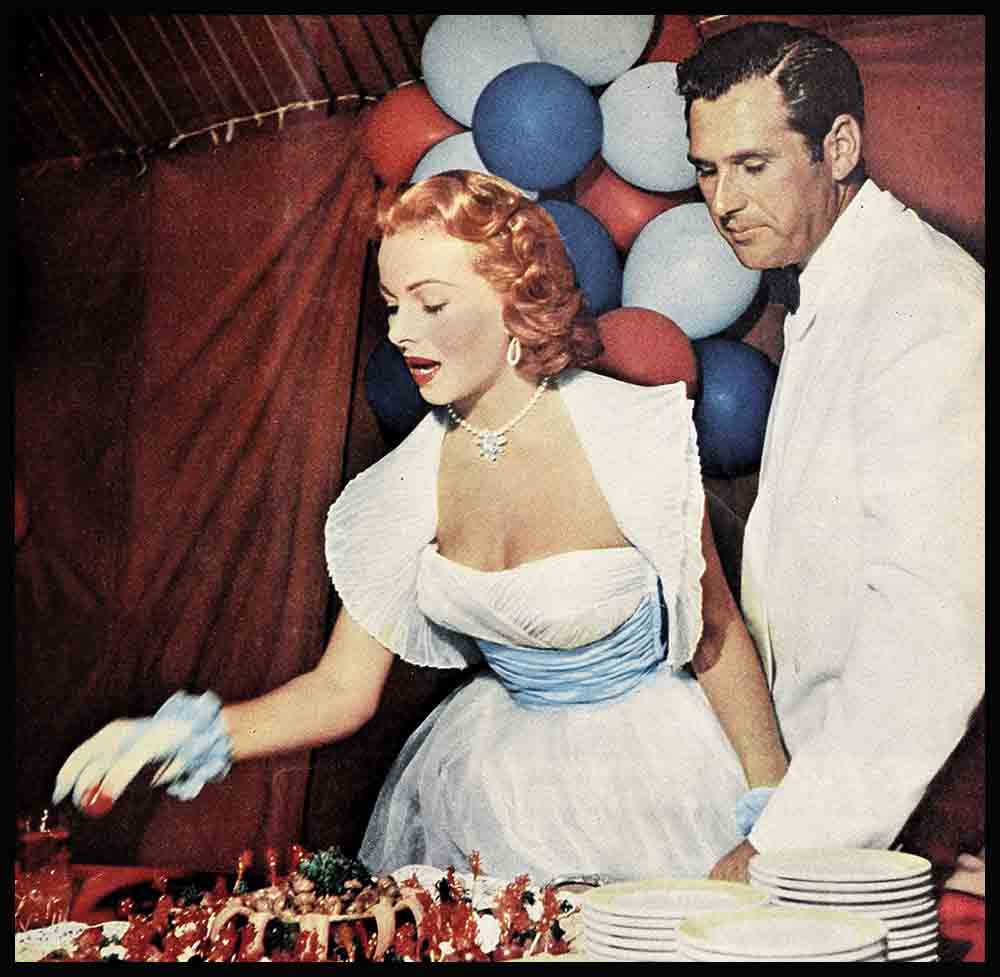 Strictly Stag: Both Robert Wagner and Craig Hill now occupy their first bachelor apartments. Bob “left home” when his parents moved out of the city. He’s doing his own decorating, and going modern. Craig’s place is Early American, but he says. “subject to change without notice” . . . Until he returns from making that movie in Europe, Rock Hudson won’t know he’s a proud “father.” Six baby kittens were born in his—bathtub! . . . Tab Hunter’s buying a diamond engagement ring on the installment plan. “It isn’t for anyone in particular,” he philosophizes. “I want to be prepared —just in case!”

Without Onions: It happened when Bob Hope returned from a sensational personal appearance in London’s Palladium. While he was away, great additions and alterations took place at his home in North Hollywood. As he drove up and got his first gander at the improvements, he cracked: “Some joint. I wonder if I can get a quick hamburger!” Since then Bob refers to his little nest as—a million-dollar drive-in!

Hands Across The Sea: We were right. Doris Day didn’t mind a bit when we gave William Holden her new private phone number. In fact, Doris was thrilled. “I just want you to know what you mean to the fellows in Korea,” said Bill, who just returned, to Doris. “Practically every man asked for you and they worship what you represent back here at home.” Bill extracted our promise that we wouldn’t give him personal publicity. However, he’s so tireless in his efforts to recruit more stars for visiting our fighting boys on the battlefronts of Korea, we just have to hold him up as a shining example.

Tomorrow’s Twinklers: Highlights on Photoplay’s party for the “Choose Your Star” winners: Tab Hunter discovering through conversation with Ursula Thiess, that she and his mother were born in the same European city . . . The very thrilled Lori Nelson explaining, “I brought my parents to the party because I wanted them to share this honor with me” . . . Arthur Franz telling Gene Barry that his beautiful wife (Adele Longmire) was home with a cold, with Gene opining his wife was home baby-sitting! . . . Elaine Stewart modeling the dress she made herself for the special occasion, while Helene Stanley and her boy friend voiced their approval . . . Joan Taylor proudly introducing her husband, Leonard Freeman. and plugging his role opposite Joyce Holden in “Girls in the Night” . . . Dawn Addams obviously not perturbed by the news that she and M-G-M are parting company . . . Beverly Michaels clutching the coveted scroll presented by Tyrone Power, as she clutched her handsome boy friend, Russell Rouse, who brilliantly directed “The Thief” . . . Barbara Ruick, a lady in red, on the arm of handsome Robert Horton who looked in the pink . . . Keith Andes wondering if RKO will allow him to accept that fabulous offer from Rogers and Hammerstein for a Broadway musical . . . Rusty Tamblyn, Dean Miller, and Michael Moore joining the others in a gallant toast to Zsa Zsa Gabor, Joan Rice, Hildegarde Neff, Oscar Werner, and John Forsythe, who were away making movies, some as far from home as France and Germany.

Relative-ly Speaking: When John Wayne’s mother suffered a slight heart attack recently, one of the first persons to reach her bedside was John’s other wife, Josephine, who has always been the favorite daughter-in-law . . . Insiders believe there’s a strong possibility of Ann Blyth becoming Dennis Day’s sister-in-law. Every time anyone asks the beautiful one about Dr. Jim McNulty—she turns a nice pretty pink!

Scarlet Sister: Former-actor, new-producer Ross Hunter wins the fur-lined “Oscar” when it comes to enthusiasm. Cal was practically carried into the projection room to see the Technicolor tests of Ann Sheridan’s twenty-four gowns for “Vermilion O’Toole.” No wonder Ross was ranting! The stream-lined Sheridan looks sensational as the small town shady lady, and a whole new career is bound to open up for her. Incidentally, the picture opens on a close-up of Annie swinging her bustle, as a voice with gee-tar accompaniment sings, “The Tale of Vermilion O’Toole!” Watch for this one.

Hep And Handsome: The Barrymores have always been gifted with a great sense of humor and sister Ethel is no exception. Recently she made one of her rare appearances at a small Hollywood party. Unexpectedly, an invited guest showed up with Johnnie Ray in tow. When the sobbin’ singer was introduced to the great lady of the theatre, she looked at him with a twinkle in her eye and drily said: “Well for cryin’ out loud!” We love that woman.

Today’s Target: Fortunately for Joan Evans, she has a wise head on those pretty shoulders and can take what isn’t coming to her. Still in the rainbow-hued stage of marriage, Joanie awakened one morning to read in one column that she was having a baby. A second “inside” source wanted the world to know that the honeymoon was over, that the bride and groom were exchanging nasty words. This method of “creating news” is an old familiar story in Hollywood. For the record, she isn’t “expecting” and the Kirby Weatherlys are the happiest kids in town.

Polite Conversation: John Carroll, who’s only made one picture this year, still has his wonderful sense of humor. Making polite conversation at a Hollywood party, Cesar Romero asked him if he was working. With a raised eyebrow and an incredulous tone to his voice, John shouted, “Working? Are you kidding! Last week I got canceled out of a benefit!” John, no mean singer of songs himself, shared his home with Mario Lanza during one period of Lanza’s studio squabbles.

Party Palaver: Cal asked for it—and got it! The Gig Youngs and the Don Siegels (Viveca Lindfors) threw a party for the newly-married Zachary Scotts. “Tell us just one Marlon Brando story,” we prodded Edmond O’Brien. who played opposite the stage star in M-G-M’s “Julius Caesar.” Good friend Eddie fastened a beady eye. “Brando’s a fine actor, a serious artist and he’s going to be great in the picture,” he cryptically said. “Now what else do you want to know?” There was only one more thing: “Where is the nearest exit?”

Set Of The Month: Esther Williams was drying out in her dressing room when Cal visited the “Dangerous When Wet” set. Things looked mighty dull until—Denise Darcel walked in! Denise plays a French channel swimmer in this one, but let her tell you about it. “I lose thirty pounds but they still have to put zee skirt on my bathing zoot. You see, I’m every- where else where Esther isn’t!” How did she lose that weight? “For zee first time I am really in love,” she sighed. “I can’t eat, I don’t sleep.” (He’s a business man. His name is Bill.) Just as we left, Jack Carson asked the French filly if she really could swim. “Swim?” she squealed. “When I was a school girl in France, I won zee prize for my breast stroke!” The entire set collapsed.

Round-Up: Ray Bolger who can afford to be independent, wouldn’t appear at the new Hotel Sahara in Las Vegas ’tis said, unless he received more than any other performer. The show went on to capacity business. The dancer supposedly received $20,000 per week for his talent . . . Plaudits for his fabulous performance in “The Thief” were short-lived for Ray Milland. He has to sing to Jane Wyman in “Love Song” and the poor guy’s scared silly . . . Jeffrey Hunter’s first gift for his new son was a letter-man sweater with big 1971 numerals on the chest . . . With Hollywood necklines plunging lower than ever, Doris Day receives hundreds of letters from masculine admirers who laud her for leaving something to their imagination! . . . Joan Crawford buys Rosemary Clooney recordings by the dozen and hands them out as door prizes.

Studio Stuff: Susan Hayward is now one up on Anne Baxter, who currently loves to smoke small after-dinner cigars in public. Susie girl smokes a corn cob pipe in “The President’s Lady” and loathes it . . . Peter Lawford, who wasn’t a bit happy when Cary Grant got that role in “Dream Wife,” probably won’t be with M-G-M by the time you read this . . . This is the story of the three Johnnies! Director John Ford was so enthusiastic over actor John Russell’s performance in Republic’s “The Sun Shines Bright,” he called his good friend John Wayne to come see the rushes.

Prodigal Son: Usually there are two sides to a story. This time we heard—three! Farley Granger was suspended by Sam Goldwyn recently, when he refused to make personal appearances for “Hans Christian Andersen.” According to friends he wanted to go. But they wouldn’t tell him where he was going or for how long. The star is doctoring for a stubborn virus, he’s building a house and is needed here. Also, the studio supposedly knew Farley would protest; he wasn’t working, and by suspending him they saved his salary! We just calls ’em as we hears ’em!

Chuckle Wagon: Red Skelton said it after seeing Marilyn Monroe for the first time in a film: “She has the kind of voice you usually hear coming over transoms!” . . . “Tony Curtis,” says a producer (who is mad at him), “is so good in ‘Houdini,’ he’s even making his best friends disappear!” . . . Vic Mature, refusing to fly to the “Baptism of Fire” location at Ft. Leonard Wood in Missouri, insisted on taking the Super Chief. “It doesn’t go that way,” the studio explained. “That’s your problem!” answered the inimitable guy.