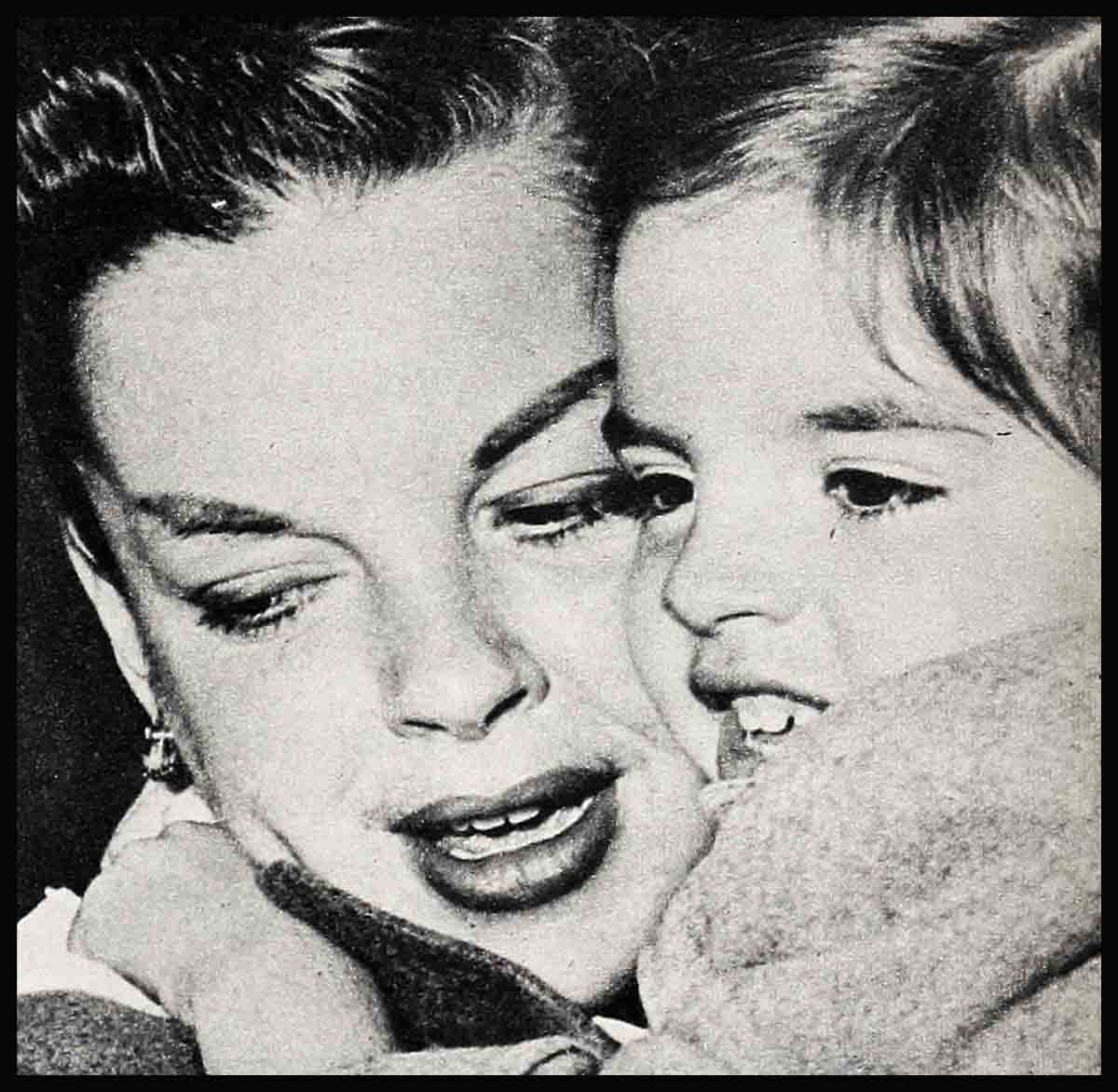 It is past time we all stopped being sentimental about Judy Garland. Judy is charming and attractive and gay. And, well aware of all the adjectives that have been used to describe her glowing act at the Palace Theatre in New York, I would add to them. She has a warm magic. She is a great entertainer.

This is exactly why we should stop being sentimental about Judy, and making excuses for her, encouraging her, in other words, to go on the way she is going.

I saw Judy last—except on stage at the Palace—at Cannes. She was playing roulette at the French Casino. “What are you doing here?” I asked, surprised at the sight of her.

“I’m learning to play this darn fame,” she told me, with that beautiful gamin smile. But it was apparent she was overly excited about the game, at a high tension. Always Judy is a little odd. She never seems to have a normal approach to life.

I saw her on the beach too, with her enchanting little girl, Liza. They had been in the sea. And they had been lying in the sun. And Judy, I was sorry to see, had lost much of her prettiness. She was sadly overweight and she did not look groomed.

No wonder, I thought, there were little gasps when she began her comeback trail in London at the Palladium. For it is not, let us face it, in the tradition of the theatre for any star to appear at so much less than her best. But Judy sang, “Over the Rainbow” and her Palladium audience broke into cheers. And when she stumbled on her way to the wings, then picked herself up quickly, saying, so all could hear, “That’s one of the most disgraceful exits ever made,” her audience went wild.

In November, continuing her comeback, Judy collapsed on the Palace stage in New York. The second half of the show, consisting of her and her company, had been late in starting. The intermission dragged on and on. When Judy finally came on, those in her audience report that her gait was unsteady and she seemed to walk with great care.

After the first few bars of her opening song, she missed the words, then caught herself and continued, but sang off key. When the orchestra broke into the introduction for her next song she whispered, “No, not that!” She walked to the piano and took a drink of water. Then she sang, “Rock-a-bye, my baby.”

Vivian Blaine, in the audience, was asked to come backstage and stand by in case Miss Garland collapsed. And it was Vivian who took over as Judy was carried on a stretcher from the theatre to a sanitarium. She was, it was reported, suffering from nervous exhaustion. Some reporters wrote encomiums about her courage, the show-must-go-on sort of thing. But many in show business shook their heads, said it was a pity that Sid Luft, her manager—whom she is engaged to marry—had gone out of town. Mr. Luft, all explained, could control Judy. The only time there had been trouble during her London engagement, they added, was when Judy and Luft were having difficulty. Mr. Luft had gone to California to answer a drunken-driving charge that had followed a three-car collision and a street argument. At the time, Judy according to her lawyer, had been in a near-by cafe, appearing on the scene only after she had heard the crash. She was, he said, in a “highly nervous state.”

After this collapse of Judy’s, the Palace Theatre was closed for four days.

The night she reopened, she received an ovation. And her curtain speech, punctuated with sobs, concluded: “I . . . I love you . . . I mean it!” Ironically enough, her emotionalism, which too often had been her undoing, also too often serves her well.

Her emotionalism, no doubt about it, is both dramatic and touching. And audiences respond to it. But when it goes on and on and on, when unhappy time after unhappy time her secretary, manager, lawyer and physician excuse her as being overwrought, or emotionally exhausted, it becomes evident she is ill and needs medical help.

No one close to Judy took seriously her attempted suicide nearly two years ago when she cut her throat, mildly, with the jagged end of a broken glass. Those close to her professionally were wholly satisfied she had been more intent upon attracting attention than in taking her life. ‘“She’s done the same thing before,” I was assured, “more than once.”

The realities, responsibilities and self-denials of maturity are not Judy’s dish. She was happier, far happier than she ever has been since, when she was a teenager—when Mickey Rooney and the young Hollywood gang met at her house to play records and dance and talk—when she was a Hollywood belle and went to night spots with her current beau. Her first marriage to David Rose lasted three years. Her second marriage to Vincente Minnelli lasted five years—more or less. Not even little Liza, whom they both dearly love, could save them.

I first became aware of Judy’s grave immaturity at a party I gave at the Jack Warners’ home. It was her first appearance following her long illness and seclusion after Liza’s birth. One of the prizes was a gold bracelet. Judy wanted it. But someone else won it. Whereupon Judy screamed and went on in a very uninhibited and emotional way—in spite of the fact that she did win a rather pretty brooch. At the time I remember wondering why someone didn’t do something for this girl, so young, charming and talented—and so in need of help.

Because of all the things Judy is, everyone always has forgiven her everything. Louis B. Mayer, head of the M-G-M studios when Judy was a star there, eternally coddled her. That studio, in fact, is reported to have spent over $100,000 on doctors, hospitals and various forms of psychiatric treatment to help her. But. finally they had to let her go. Too often they rejoiced over her glad cry, “I’m back at work—and so happy,” only to discover, one or two or three weeks later, that her company was waiting on a studio or recording stage and she had not appeared, that someone had telephoned to say she was ill.

Betty Hutton, as everyone knows, had her great success in the title role of “Annie Get Your Gun” after Judy was removed from the cast. Jane Powell climbed higher than ever in “Royal Wedding” after Judy blew up one day when Arthur Freed, who had been instrumental in getting the studio to entrust her with the part, stood watching her rehearse. “Stop looking at me,” she told him, glaring. “Stop looking at me, I say!” And then she cried and stomped off the set.

The week before, she had celebrated her twenty-ninth birthday. Certainly she should have had more self-discipline.

Metro didn’t want to let Judy go. Even after her suicide attempt they considered her for Julie in “Show Boat,” Photoplay’s Gold Medal picture in which Ava Gardner won a citation for cone of the five most popular performances of the year. But in the end there was no choice. It costs hundreds of thousands of dollars, even millions, to make great movies. And stockholders want no part of any cost sheet that shows the lost time an emotionally unstable star must cause.

Whatever Judy does, however she does it, all those who love her are quick with excuses. She’s been in show business since she was three, they say. All her life it had been her habit to go to bed at dawn and sleep all day. In order to .adjust to the turnabout schedule of movies she had been obliged to take sleeping pills to go to sleep at 9 p.m. instead of 3 p.m. And because of the effect the sleeping pills had upon her she had had to take benzedrine to wake up. So it goes, affording Judy no impetus to discipline herself.

The only time in many years when Judy has seemed to be on an even keel was during and following her treatment at a Boston clinic. More psychiatry is what she needs now, in my opinion. And I’m not one of those who goes overboard, who believes that because a person is given to hiccoughs she was frustrated in her youth. Not at all. I do believe however that psychiatry often will clear such emotional maladjustments as seem to plague Judy. And I’m convinced she would do something about herself if her public and colleagues would make it clear they had had enough of her didos.

In January, the Palace Theatre again was dark. Without Judy there could be no show. The report was that Judy had laryngitis. That might have been the whole truth. But because of her history and because Sidney Luft again was out of town there was more than a little speculation about what ailed her.

I saw Judy behind stage at the March of Dimes Show at the Waldorf. She seemed to be in wonderful spirits and, in reply to my question, “What’s next?” she said, “I’m taking my entire show out to the Los Angeles Philharmonic!”

Something should be done about Judy—now! That she is permitted to go on appearing overweight, failing to make performances, trading on her emotionalism by sobbing through curtain speeches is unjust to her and it also is unjust to the tradition of the theatre.