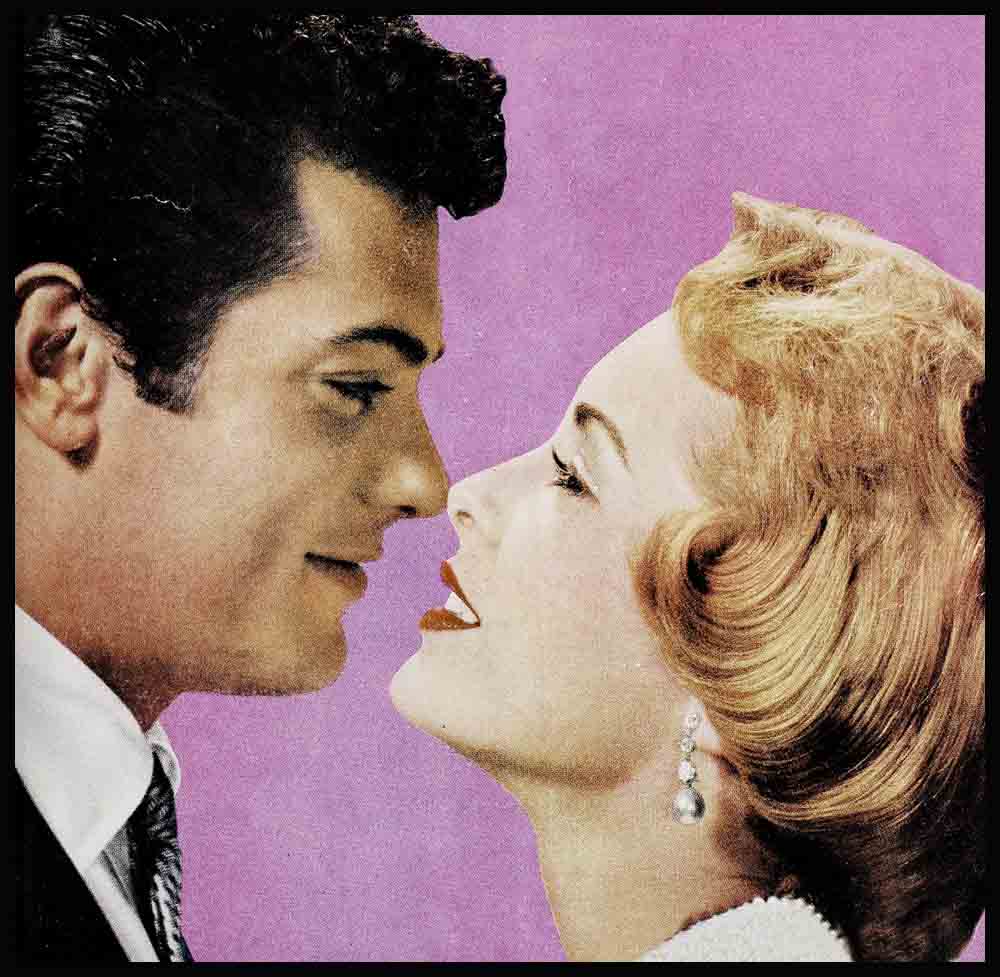 When Janet Leigh and Tony Curtis eloped a little less than two years ago, there were a lot of people who said the marriage couldn’t possibly last.

“Their worlds are a million miles apart.” “They’re not grown up enough to make a marriage work—neither one of them.”

“They’re both too involved in their careers.”

So chanted the prophets of woe. And they stood back gloomily to watch the marriage crumble.

Janet and Tony, in the meantime, went blithely on to prove (not to the cynics, because they really didn’t care much what people thought, but to themselves) that they knew what they wanted. And that they had it—in each other.

But proving that—and they admit it with no self-consciousness at all—was not exactly child’s play all the way. There w ere differences to be resolved, adjustments to be made, frictions to be ironed out—just as there are in any marriage.

The idea of being a guide—a kind of Standard of quality—for other couples struck Tony and Janet as a little strange, at first. But after a little thought—and a lot of mutual laughs—they were able to work out a list of the important things they share that add up to happiness.

Getting to know each other took time—but Janet and Tony made it uorth the effort. Could you?

1- Do you have as much respect for your partner’s dreams and ambitions as you do for your own? And will you work for the good of his career as well as yours? (Janet and Tony help each other learn lines, and will even take chances on their own careers when they think it will be helpful to the other one—as Tony did when he went on suspension to accompany Janet on her location trip for “Naked Spur.”)

2- Are you willing to make some sacrifices to insure financial security?

(At the Curtis house, they budget their earnings carefully—and keep a piggie bank to take care of the odd fripperies the budget doesn’t cover.)

3- Do you share each other’s hobbies and interests? And—if you don’t—are you willing to try to learn to do so? And—if they still leave you cold—can you understand that if your husband wants, for instance, to play golf once a week, his doing so by no means constitutes desertion?

(Janet and Tony both love the outdoors—fish and swim together. And they love teaming to do the magic tricks they learned for “Houdini.”)

4- Can you let your spouse (or date) finish telling a story (even if you do know the punch line, too) without interrupting?

(This is a toughie for people in the acting business, who are used to having the center of the stage. But the Curtises are perfectly happy about acting as “straight man” for each other.)

5- Can you refrain from making public corrections of tiny fact errors that aren’t important anyway? (“No darling, you’re wrong. It wasn’t Tuesday. It was Thursday.” That routine.)

(Tony and Janet never interrupt each other—never alter each other’s facts. Any conversational editing is done in the postmortem sessions after they get home—and never, never in public.)

6- Do you try never to be late for an appointment?

(Tony tries hard—but he doesn’t very often succeed. But Janet—who is a human clock and appointment calendar combined, has long since given up being annoyed when Tony keeps her waiting. “Tiffing about it,” she says, “just adds to the time wasted. And subtracts from happiness.”)

7- If one of you is naturally neat, and the other on the disheveled side, can you work out a meeting of the minds—with the sloppy one trying to pick things up, and the neat one trying not to heckle when it doesn’t happen all the time?

(Either extreme can be a headache. “Janet’s so neat that,” says Tony, “half the time she picks up my clothes and sends them to the cleaner while I’m still in them.” She empties ash trays frantically, and she gets the dishes washed before the last course is eaten. Tony, on the other hand, would just as soon leave anything he’s been using right where he’s used it. But they’re both trying—Tony, to pick up after himself once in a while, and Janet, to give him a chance to finish what he’s doing before she gets the broom and the duster out.)

8- Are you willing to forget about dignity every once in a while and just be silly and gay for sheer silliness’ sake?

(At this, the Curtises are expert! Not only have they been “starring” in the whacky home movies their buddy, Jerry Lewis, makes, but they’re masters of slapstick at home.)

9- Can you bypass some of your favorite foods and learn to like some of the things your partner loves—to keep peace at the dinner table?

(The problem of liking different things has never arisen for Tony and Janet. “With Tony,” says Janet, “it’s a matter of his not wanting to eat at all! I have to practically tie him down to get him to finish a meal.” “This is the only thing,” says Tony, “that we ever really spat about.” And those spats are good-natured.)

10- Can you not criticize each other’s clothes—except constructively?

(The Curtises are always buying wearing apparel for each other as gifts—love each other’s taste. Says Janet, “I wouldn’t dream of buying anything Tony doesn’t like. And I love what he chooses for me. That red fur coat he bought me, for instance. Yummy!”)

11- Will you make every effort to understand and love your in-laws (or your future in-laws) no matter how different they may seem from your own parents?

(No problem at all. Tony and Janet were crazy about each other’s families right from the start.)

12- Do you share each other’s love for animals. And, if you don’t, can you try to learn?

(This one’s a snap for the Curtises, too. Janet wanted a dog. Tony bought her one—a French poodle. They named her Houdina, in honor of their co-starring roles in “Houdini,” call her Hoodoo for short, and both love her and spoil her together.)

13- Can you respect each other’s weariness—or need for some peace and quiet after a hard day’s work—and forego that night on the town?

(Being pro’s, both Tony and Janet know what hard work means. And while they both love getting dressed up and hitting the night spots, they don’t love it enough to try to wheedle each other into going out when one or the other of them wants to stay home and rest.)

14- Can you share each other’s life, understand each other and cooperate, without losing your own individuality?

(Say Tony and Janet: “We have discovered what every happy couple discovers—that everything you do together makes you grow more both as a couple and as individuals.” Neither personality has been swallowed up by the other—but both personalities have gained new facets through their marriage.)

To Tony and Janet, knowing the answers to most of these questions posed no problem. And they were willing to work at those that were troublesome. But working at marriage, they say, is the most fun they’ve ever had. And from all indications, it’s fun I they’re going to keep right on having.

(You’ll be seeing Mr. and Mrs. Curtis together, as a working team in Paramount’s “Houdini.” Janet is also in RKO’s “Jet Pilot,” and in “Confidentially Connie” and “Naked Spur” for M-G-M. Tony is in U-I’s “Drifting.”)