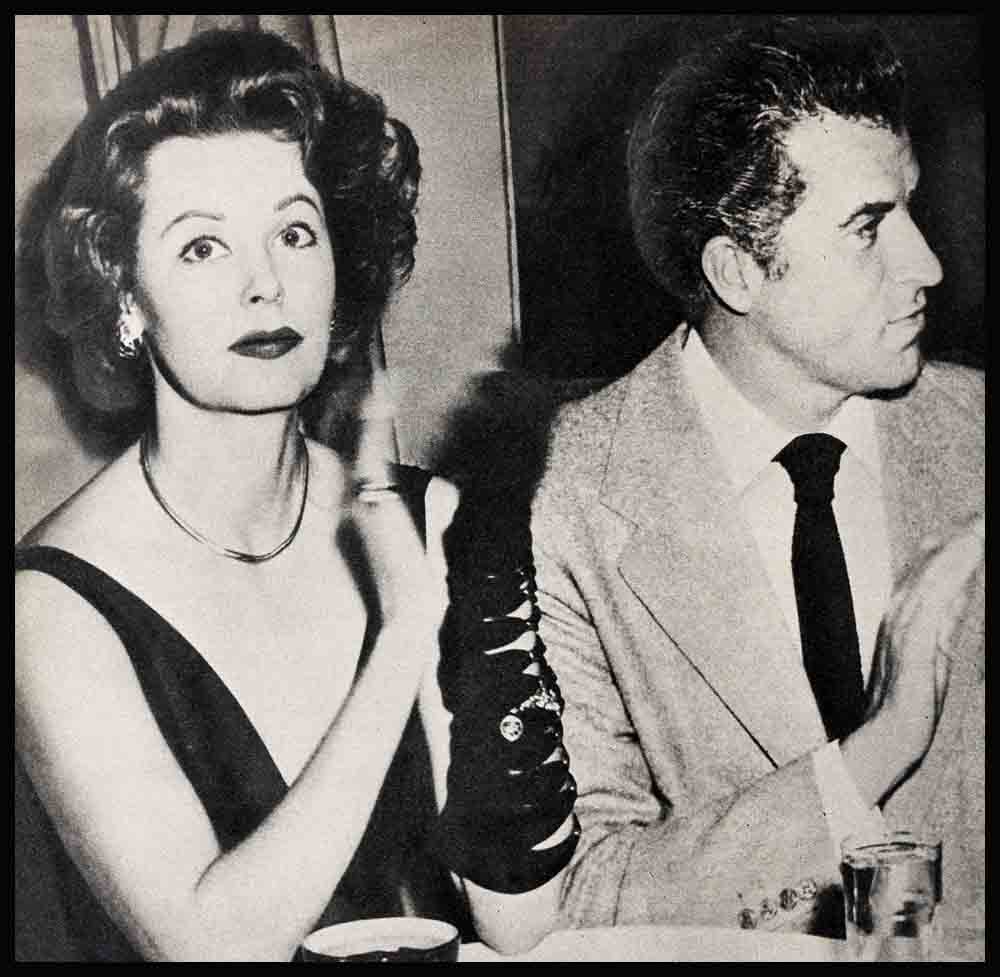 Too Busy For Love?

When Arlene Dahl’s marriage broke up late last summer after a stormy, headline-making year, Hollywood sad singers tuned up for their sob songs. “Arlene is too ambitious to put anything into marriage,” they said. “And too beautiful. That face and figure can’t help attracting men like flies. But no man who calls himself a man is going to stand still for all the competition.”

Then they made a prediction. “Arlene is headed for a life as the richest and the most beautiful spinster in town.”

Arlene was too busy to comment—too busy being seen socially with the most attractive men in town. She was also busily cementing her heady new start on the career that was threatened when M-G-M terminated her contract.

And what lay ahead for Arlene in the romance department? When, at first, she seemed unconcerned, her friends wondered. Even when tall, dark Fernando Lamas entered her life, they still wondered.

Arlene and Fernando began appearing together in Hollywood nightspots soon after the names of Lana Turner and Lex Barker were being linked by columnists. At first, it seemed a turnabout-is-fair-play attitude. However, even when Lana and Lex began being seen with other people, Arlene and Fernando remained a devoted twosome.

It has been said that the lovely Miss Dahl may not wait for her California divorce to become final—that she just might proceed to Nevada, divorce Lex and marry Fernando. However, Arlene’s head often manages to work in collaboration with her heart. After a number of dates with Fernando, she announced the possibility of doing a picture together—a remake of a successful Irene Dunne-Charles Boyer film.

And so Arlene continues to baffle the experts. Only a few short months ago when she left M-G-M, a few chronic pessimists were proclaiming that her career was all washed up. Arlene fooled them. Within a period of a week, she had signed a bigger and better contract with Paramount and established herself as a comer in two other fields—as a syndicated columnist and a manufacturer of lingerie. Professionally, she was far from washed up. And personally?

“Don’t worry about Arlene,” said one of her friends. “The Dahl is the most beautiful girl in pictures today. And for my money she’s the brightest . . . if not the brightest, certainly the best organized.”

The occasion was a party at “the Dahl’s” new bachelor-girl house high in the Bel-Air hills. It was an afternoon tea arranged by Arlene to introduce her most recent lingerie models to fashion buyers.

“Just look at this house,” the friend went on. “You probably wouldn’t believe it, but there wasn’t a stick of furniture in the place at ten o’clock this morning.”

At this point—some five hours later— Arlene’s formal living room, and the dining room in view just beyond, were elegant beyond words with deep piled pewter grey carpets, custom made draperies of white satin, chairs and sofas in pewter and white; tali, red-gold lamps with white shades. Even Arlene’s pet poodle (pewter grey, incidentally) had a handsome new collar.

And the hostess, her red gold hair and white skin set off dramatically by a taffeta dress of pewter grey, was ravishing.

The whole scene was a miracle of feminine allure carefully and concisely arrived at. Everything was in its place, and exactly right for its place. A cigarette ash in any of the new, white ashtrays seemed an affront to the hostess’ perfectionist tour de force. A man s pipe would have gone out in protest.

Lex Barker, the man in Arlene’s life for the tumultuous year and a half just passed, was not there. They had separated a month earlier, Arlene fleeing to her gilded, hilltop bird-cage, and Lex to bachelor diggings near his studio. Within a couple of weeks Arlene was to go to court to divorce her handsome Tarzan on the grounds that he called her a “hick from Minnesota,” once locked her out of their home, and sulked when she was busy with her career.

Had Lex been there, in light of this complaint, he no doubt would have been “sulking.” For Arlene was almost too busy with her career to come to her own party. Not only had she readied a new house for a big “do” in something less than two weeks, but she had just finished “Caribbean” for Pine and Thomas, going immediately into wardrobe and make-up tests for her role opposite Bob Hope in “Here Come the Girls.” She had also supervised the preparation of a new winter lingerie line, worked long hours on its exploitation, and kept up with her daily beauty column.

If she was tense and tired, she didn’t look it. “Probably had a nap,” her friend put in. “Arlene always has a nap.”

If she was unhappy, it didn’t show. In fact she was radiant. Forty winks couldn’t do that!

One cannot help but wonder what makes Arlene tick. What quality has she—or perhaps, what normal feminine sensitivity was left out—which enables her to keep her fabled beauty unmarred, her composure unruffled in the face of almost unbelievable I pressure, both personal and professional?

It is possible perhaps to approach an answer with a second look at her story.

Before she was twelve years old, a school girl in Minneapolis, Arlene herself has testified that she knew just what she wanted out of life—she wanted to be an actress. She was beautiful even then, and she was ambitious, just as her mother, Idelle Dahl, was beautiful and ambitious, wanting for her daughter all the things she had missed in life. Visiting Hollywood with her parents when she was twelve intensified Arlene’s earlier resolve.

She went back to school, but only her dramatics classes warranted her full attention. At fifteen she was appearing on children’s radio programs as a professional; her high-school graduating class voted her “most likely to succeed.”

Her rare beauty, rather than her budding talent, won her her first jobs—as a model in Chicago’s smartest Stores. Heady wine for a girl not yet twenty, but for Arlene they were just stop-gaps. She was headed for New York—and the theatre. And there she managed to land a part in a musical show. A short run here, another there and between, more modeling. More stop-gaps.

It was a hard-working life with no time for love, but it was by no means manless. Such beauty as Arlene’s attracts men in the words of the sultry song “like moths around the flame.”

“Come here,” Arlene’s beauty said, and men came and admired her. “Here—and no further.” Arlene’s ambition pushed love away. And then she came to Hollywood, on the wave of good notices for her performance in “Questionable Ladies.” Here she met Lex Barker—just as ambitious, just as beautiful, if a man can be called beautiful, as she was.

Lex fell in love. And something new happened to Arlene. She found it increasingly harder to follow “Come here” with “Here—and no further.”

Close friends who saw Arlene constantly during the period of Lex’s wooing say that she was in constant conflict—with herself. “Do I love him enough?” she would ask, over and over again. How could she be sure? It was the first time. And so, after a false start or two, they were married.

The marriage was doomed from the start. Photographers dispatched to cover their life together in their honeymoon home returned to report not honeymoon bliss, but a contest to determine who’s best profile would be turned camera-ward.

Lex, the outdoor man, went swimming alone, walking alone. Arlene’s beautiful skin is allergic to the sun. He came home too many times to wait and wait and wait while Arlene gave interviews, posed for pictures, dictated her column. He found himself, when Metro’s decision to drop Arlene drove her into an around-the-clock struggle to re-cement her career, spending even his leisure hours alone.

He sulked, understandably. He left— once, twice. But he came back.

The last time, he didn’t come back. And if Arlene cared, it didn’t show.

What next for this “most beautiful” girl? Professionally, undoubtedly, she will get to and stay at the top. Her acting improves with every picture. Her ambition and her organizational talent will see her to success. But in the realm of the heart?

Here the prospects are not so bright, whether or not she and Lamas decide to wed. Before she can love and be loved, marry and have a successful marriage, Arlene will have to discover—at least uncover—her heart.