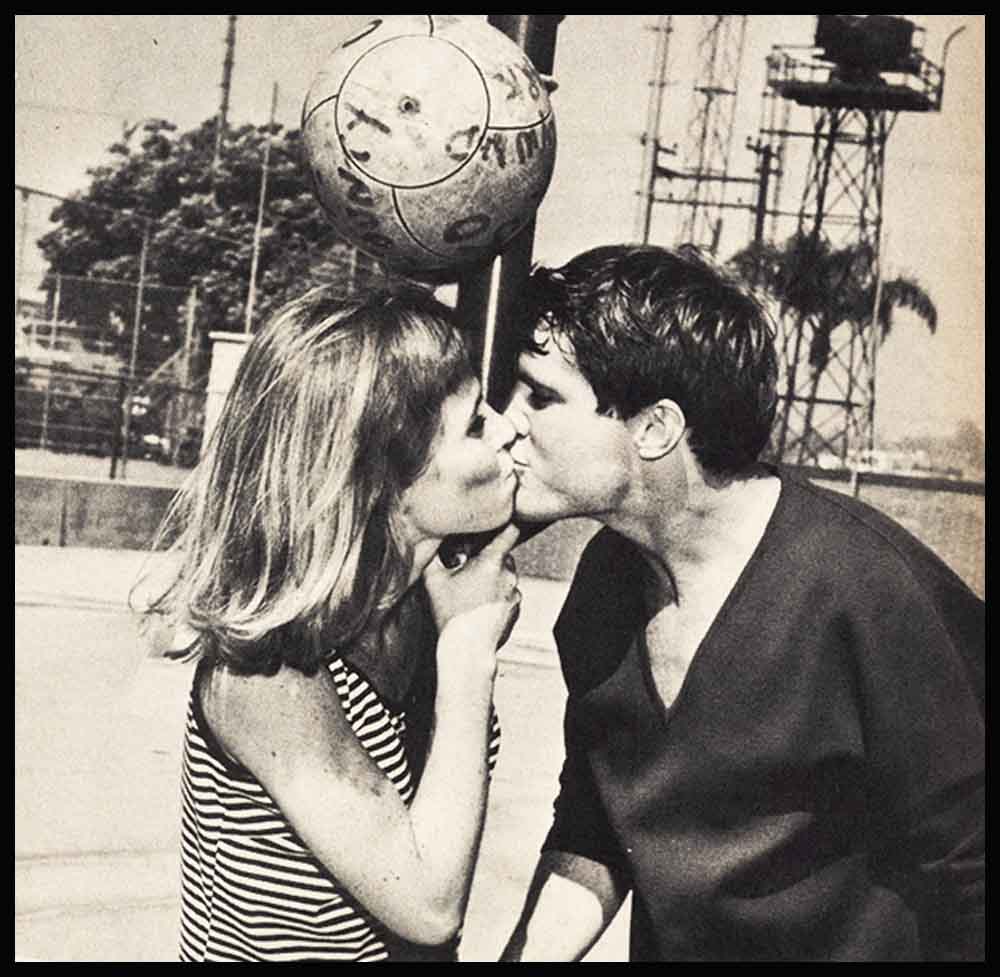 Are Pat And Chris Trapped At Their Own Game?

“We don’t go around holding hands, all lovey-dovey and goopy like that,” says Pat Morrow about her constant companion. Chris Connelly is her main love both on and off ABC’s Peyton Place set, an idyllic and perfectly innocent situation for Hollywood. “The best way to describe it is that we just have fun. We’re like two little kids and we do nutty things. We climb trees, we fly kites along the beach and we spend a lot of evenings on the studio lot, wandering around the sets and making up our scripts. We pretend we’re pic- nicking on the Riviera under a full moon . . . we’ve both got wild imaginations and it’s a ball.” It sounds youthfully romantic, but is it? What does this all mean? Pat keeps insisting it’s just a happy friendship. “A lot of people think the way we behave is all publicity, but it isn’t at all. It’s just a fresh, bright,spontaneous thing . . . we don’t dwell on our relationship.” For both, career comes first. Pat flatly re- fuses to visit Chris’ bungalow in West Hollywood. “My reputation,” she says simply. Instead Chris visits the Morrows frequently. They say goodnight at the door, kiss on the Peyton Place set next day, and the passionate romance continues. But this love may grow stronger than “friendship” and trap them at their own game—with marriage being the only way out.

The Bouncy LIFE OF PAT MORROW

Born in Los Angeles, Feb. 17, 1944, her father is an attorney, and she has a B.A. degree in political science from San Fernando Valley College. Pat speaks French, Spanish.

Peyton Place role (Rita Jacks) is taxing, but fun. Both Pat and Chris want to do musical comedy. Pat has been on the stage with Mary Martin in Annie Get Your Gun, which was also TV spec.

Pat’s a bouncy one, and a super touch football player. Her cavorting reflects youthful exuberance. She’s 19, made film debut at 7.

Pat was 7 when she made movie debut in Roar of the Crowd. Later she was on The Mickey Mouse Club, above, for 10 episodes. Other credits include Dr. Kildare, Perry Mason, The Virginian, 100 others, plus 12 movies. She was dtr. of Richard Carlson in 20 segs of / Led Three Lives.

“Chris is terribly inventive and very talented—l’m not being prejudiced!” says Pat. Even though she spends all her free time with Chris, she doesn’t consider it “dating” The blue-green-eyed fireball, weighs 100 Ibs., is 5‘4“.

Pat doesn’t want Chris to feel trapped. “We haven’t talked seriously about marriage. We’re just happy together. People sense the warmth between us” Will all this electricity overpower the career drive?

Chris has a silver Sting Ray Corvette just like Pat’s. “The day he drove it on the lot the crew tied our script chairs together with pink and blue ribbon and started calling us Mr. and Mrs. Burton.”

Pat tried living in an apartment of her own, but it only lasted a matter of weeks. “I couldn’t cook, or do anything domestic.” So she’s back home with mom’s (above) cooking.

The Swinging LIFE OF CHRIS CONNELLY

Chris, born Sept. 8, 1941, in Wichita, Kansas; youngest of seven, he went to private schools, was a star athlete at Regis College, Denver.

At the Missouri Military Academy, Chris was class president for 3 years. He got into acting by accident, trained at Pasadena Playhouse.

Before PP brought Chris and Pat together he dated 18-year-old Swedish model, Christy Hanek, who shared his interest in books, music.