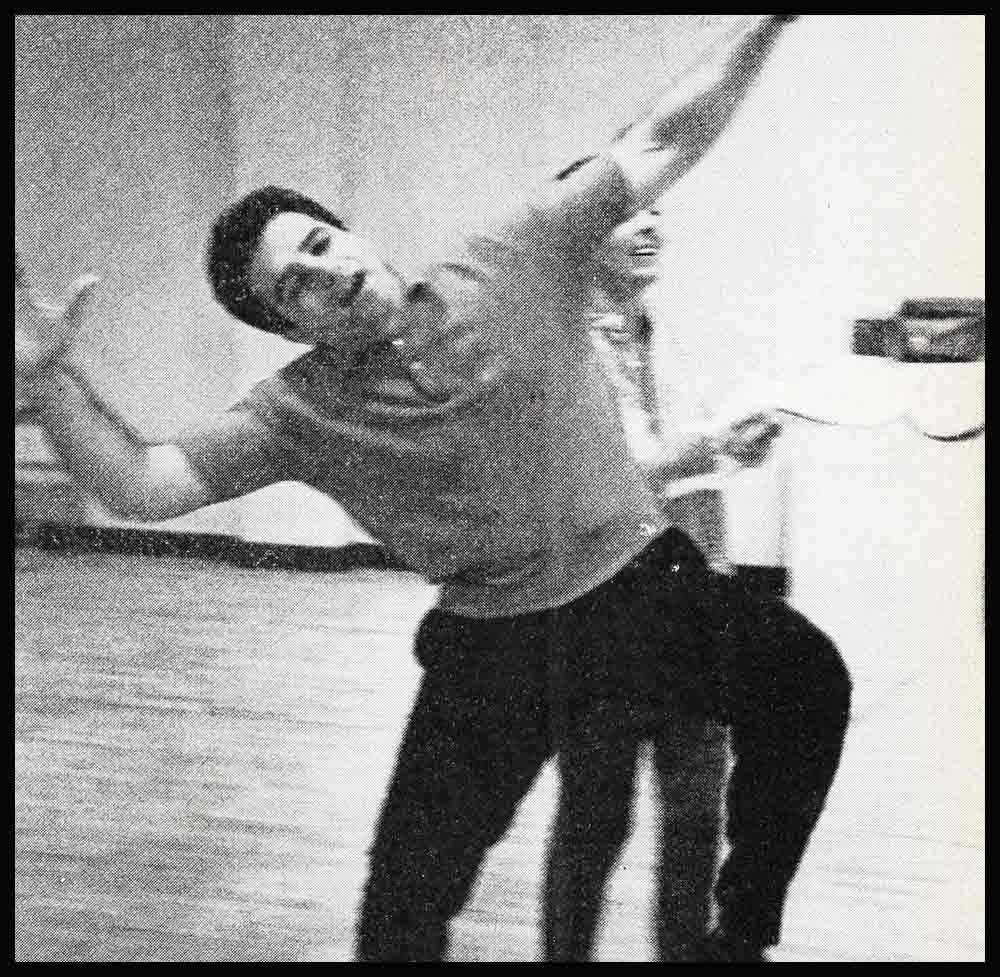 Ever since they met in 1958, George has been giving Susan a big rush—while issuing statements about why he can’t marry her. (Mostly he was too young for marriage.)

Finally last year, when Susan was making a picture in Munich, her name was linked with Monty Clift‘s. And George, in Palm Springs, was heavy-dating ex-Queen Soraya.

But when Susan returned from Munich, George must have done a double-take. He flew to meet her in New York, they kissed and made up and went to buy the ring. They’ll be married in Hollywood some time this summer.

Connie Stevens created a nuclear explosion at Warner Brothers when she walked out while filming a segment of “Hawaiian Eye.” Connie claimed the studio was taking too big a hunk of her personal appearance loot. However, I heard money wasn’t the real reason for her ire. Connie reportedly blew her top because Dorothy Provine was given two guests stints in a row in “Hawaiian Eye.” This was just too much for Connie to endure. The studio wisely cooled Connie down, and she was back on the lot in a few days. Just as well, because Bob Conrad and other members of the cast had threatened to mutiny if Connie didn’t return to play Cricket Blake!

Isn’t Debbie Reynolds planning to exchange her script for an apron when the baby arrives in September? Talk is that she’s planning to retire from the screen to devote full time to mothering and helping Harry Karl open new shoe shops.

Troy Donahue rates a pat on the back. He’s acting like a man instead of the boy who couldn’t control his temper. Unfortunately, he had to grow up the hard way—via the Lili Kardell episode. But wasn’t it worth it, Troy?

If it isn’t love, then I’m baffled! Rock Hudson cut short his planned two-month yachting vacation in Mexican waters to fly back to Hollywood and Marilyn Maxwell.

He’d only been away two weeks when the yacht pulled into Acapulco. But Rock was so Marilyn-sick he flew right back.

There’s a rumor around that Sandra Dee and Bobby Darin are expecting again.

When Jerry Lewis opened his new ultra-swank night club on the Sunset Strip, one of the invited guests didn’t show—and it wasn’t surprising. Dean Martin headed for Palm Springs and the golf course instead. Joey Bishop was the clan’s only rep on hand. Guess Dean figured it would be a little like eating crow. Only a few blocks away from Jerry’s nitery is Dino’s nite spot. And although Martin no longer has any interest in the club, it still bears his name. . . . Was Jerry’s face red at his opening! The plumbing in the ladies’ room went out, and the femmes had to be detoured to the rest room in the manager’s office.

Keely Smith‘s new sensation is Frankie Avalon. They met the night of the Star-A-Minute Ball. Later they had a ball of their own, twisting up a storm at one of the night clubs. Bob Fuller is just another memory in Keely’s book. So is he in the eyes of another lass, Kathy Nolan. Kathy and Keely’s brother, Piggy Smith, are now a twosome.

It Bob Wagner doesn’t give his consent tor a divorce soon, Natalie Wood may go against her barrister’s advice and obtain a Mexican decree. Warren Beatty is getting impatient. I don’t know it he did hire a bodyguard, but he could have used one while Joan Collins was in town. I hear her eyes were spitting fire at the mere mention of her former fiance’s name.

Scooping around: Embarrassing moment for Lang Jeffries (he’s free again following the Rhonda Fleming interlude). Lang was at the home of an attractive actress when the telephone rang. The male voice on the other end asked to speak to the girl. Lang explained that she was getting ready to go out on a date and was showering. The man then demanded, “Who are you?” “I’m her brother-in-law,” Lang sheepishly replied, knowing it was a white lie. “Then that makes you my brother,” snapped the angry voice on the other end of the line. “I’m her husband.” And though it turned out that he was only an estranged husband, I still think the story is hilarious. . . . Isn’t Christine Kaufmann dating Alexander Whitelaw, the associate producer of “Taras Bulba,” in which she played the fem lead? Christine (she’s only seventeen) keeps turning down dates with boys her own age. . . . Ty Hardin really made an impression on Shelley Winters when they dated while , filming “The Chapman Report.” She invited him to fly to Phoenix for the opening of her play, “Natural Affection.” And Ty certainly was in gay spirits upon his return. . . . I hear that Greta Chi proposed to Gardner McKay. Now that’s a switch—even for Hollywood!

Sharon Hugueny continues to build a shell around her life, following her divorce from Bob Evans. She appears overly moody, and didn’t seem eager to return to work at Warners in February. She was cast in a guest-starring role as a beauty contest winner for a “SurfSide 6” segment, but didn’t show. The studio had to cast a substitute for her at the very last minute.

Look for Luciana Paluzzi to marry attorney Jerry Doff when she’s free of Brett Halsey. Brett and Debbie Loew are expected to merge, too.

Rumors keep flying out of Rome about Elizabeth Taylor faster than you can count them. One thing appears to be true: The honeymoon is over for Liz and Eddie Fisher. They try to hide their unhappiness, but it’s becoming all too obvious. Eddie, once glued to Liz’ side, is spending more and more time away from their Rome villa. Latest rumor had her linked with her “Cleopatra” lover, Richard Burton. Dick went to all lengths to deny this; he even issued a statement to the press that he and Liz are only “good friends.” I’d like to know his definition of “good friends.” At the height of marriage break-up rumors, Liz was rushed on a stretcher to a Rome hospital. This time the cause wasn’t pneumonia, but chili and beans. Doctors said she suffered a mild attack of food poisoning.

Can’t figure Hope Lange. She takes Robert Logan to dinner and Stephen Boyd to the movies. She and young Robert were dining at a secluded beach restaurant in a cozy booth for two, and the next night she was at a premiere with Steve. By the way, Hope and Connie Stevens accidentally ran into each other at a Palladium benefit. They exchanged stares that would have put out the fire in Dante’s Inferno, and then Connie turned around and walked off without a hello or a goodbye!

Don’t be too shocked if Marlon Brando and Anna Kashfi remarry. The way they’re getting along these days, you’d never know that only a few months ago they were feuding worse than the Hatfields and the McCoys. I’ve already reported that the slap Anna handed Marlon in court was a dead give-away that she still hankers for him. Since then, they have been like Romeo and Juliet. Anna even withdrew her appeal against the court order Marlon won that day, which allows him to see their son Devi more often. But don’t hold your breath till that unpredictable pair makes a move. Didn’t Anna just finish telling PHOTOPLAY what she thinks of Marlon? Those two might remarry or they might refeud—make your own bets!

When Debbie Walley and John Ashley got engaged, PHOTOPLAY threw a real bash. The two kids were so busy greeting their guests, they barely had a minute together—but they did manage to sneak a quick kiss (l) while no one but the photographer was looking! Ann-Margret and Burt Sugarman (2) congratulated John, and then the next thing I heard they announced their engagement. It must be catching, because not too long ago Ann-Margret was telling everyone who would listen that she had absolutely no intentions of marrying anyone for at least two years. I’m afraid there are lot of disappointed young guys around town—Frankie Avalon and Ty Hardin among them—who had their eyes on Burt’s girl. I never did find out just what Gardner McKay (3) wa$ doing to Sidney Skolsky. I thought he was probably trying to prove a point, but when I looked for Sidney to find out what the point was, I couldn’t find him anywhere. Of course, the place was crowded, but I kept thinking that maybe Gardner didn’t like something that Sidney had written about him in his column and was telling him so. Whatever it was, I thought I’d better keep out of Gard’s way—he’s taller than I am, too! Connie Stevens and Ponce Ponce (4) were having a real ball. It’s nice to see co-workers (Ponce’s on “Hawaiian Eye”) get along so well after hours. I think this speaks well for Connie. Old-marrieds Bob Conrad and Nick Adams (5) took John aside to give him a few tips on how to keep a wife in line, and it looks as if Bob cracked up just thinking about it! Doug McClure and Barbara Luna (6) still looked like honeymooners to me even though they’ve been married almost four months! Debbie and John (7) kept looking at her ring—to make sure they weren’t dreaming!