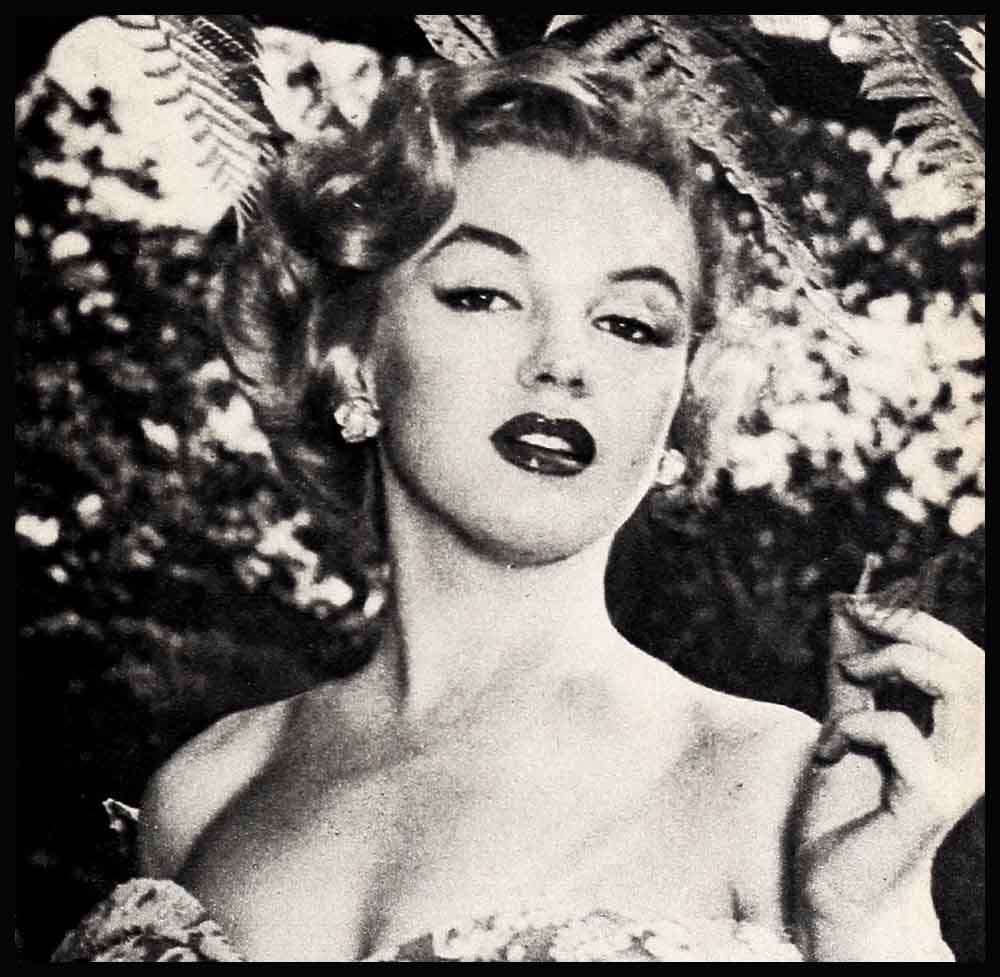 Make It For Keeps—By Marilyn Monroe

I have only one excuse for being brave enough to respond to Photoplay’s faltering request that I give out with rules for making summer romances last. That is, that I do know how desperate it can make a girl to see a full moon riding across a deep blue summer sky and to know she has no place to go and nobody to go there with.

Loneliness led me into marrying at sixteen. I knew nothing about men. I knew less about love. I knew only that I wanted to belong, to be part of life around me. I had no home or family.

That was four years ago. I haven’t married since. I’m now started on a career and naturally I hope it is going to be a successful one. It’s thrilling to see the papers and magazines refer to me as “promising.” It’s comforting to get those pay checks once a week, after all the insecurity I’ve had—and to have my own car and my own apartment.

But let’s be honest. A girl’s Number One dream is to be ideally married. She never knows when or where she may meet the right man. It might be during this summer’s vacation.

If you think a Hollywood girl, living in a continual summer resort, has more chances to meet men than the average girl in a small town, you’re both wrong and right.

Our work allows us to meet a lot of men. But those men also meet a great many girls. So we have to work just as hard or harder at the same rules for survival until we reach that blessed third-finger-left-hand state. This much is certain. Whoever you are, wherever you go, life is like a bank. You can’t take more out of it than you put into it; except for a reasonable amount of interest.

So, when you go off to a summer resort, don’t expect the Big Catch of the place to spy you the first time you enter the dining room, to swoon, become totally unaware that any girl but you exists, marry you and set you up in a house only slightly smaller than the Ritz.

In fact, speaking of the Big Catch, it’s often smarter not to concentrate upon him at all. One, the competition in his direction is bound to be greater. Two, your casual politeness in contrast to the rush he is getting from other quarters might even intrigue him.

Your contribution to life at a summer resort will be less than it should be if the resort is a place where golf is the great sport and you don’t golf, or where sailing is the order of the day and you know nothing about sailing.

Above all, go where you belong—not only because you can participate in the activities enjoyed there but because, at ease, you will be relaxed and secure.

Pretense never is any good. It’s a waste of good time and money, for instance, to have a man attracted to you because you appear to be a gay good-time Katie when really you’re quiet and have a mind with a serious turn. For what you are becomes evident all too soon—and then, where are you? Or where is he?

Speaking of going to a hotel or camp or on a cruise reminds me of clothes.

Last winter one of the most attractive girls I know stopped at the studio to lunch with me. I lunched. She sipped chicken broth and nibbled rye toast. “I have to lose five pounds,” she told me. “I’m going to Palm Springs for a few weeks and my tennis shorts and sweaters are slightly tight.”

“I wouldn’t be seen in new ones. You know how men are about sport clothes. They get a vague feeling you don’t belong in clothes that look as if they just came out of a store. And I want invitations to play tennis.”

I nodded. “Man-hunting this trip?” “Sounds frightful when you say it,” she laughed. “But I am—together with a few dozen other girls who will be on the desert at the same time. So I may as well take advantage of anything I know.”

She was so right—as she proved. For she got her man the first week she was there. And she got her ring at Easter.

Get a few new things for the excitement they offer. A new cocktail dress, for instance. There’s no harm in looking chic at the cocktail hour. In fact, a girl should. But the effect should be achieved with simple good taste. The comment you want to overhear is “Isn’t that girl attractive?” Not “She must spend a lot of money on her clothes.”

Men, as my friend suggested that day at luncheon, like to wear old, comfortable things for sports. They don’t wear slacks or sports jackets fresh from the tailor, or swimming trunks that have never been wet. Thus, they are, I think, unconsciously critical of a girl who lolls beside a swimming pool in a glittering new lastex. They feel she’s a phony who never meant to swim, even though she might be just a lonely girl who doesn’t know how.

It’s always a definite asset if you know how to dance. But the most important rule on the dance floor is: Don’t lead by so much as one little gesture. Remember, the first pursuit should be forthcoming from a man.

Another thing: It definitely helps to read the sports pages, not every word, but enough so that you know that the Boston Braves and the Cleveland Indians are not redmen, and that Ben Hogan never rode a thing in the second.

“Fellows,” as one of Hollywood’s glamour girls puts it, “are always so astonished and pleased when they discover you read something besides department store ads, that they begin to rattle on about their pet interests, while you listen almost silently, giving the impression that you are a very great conversationalist.”

Incidentally, I think the listening act can be overdone. It is the intelligent reply that keeps the man going, that makes his conversation spark. If he has felt stimulated when with you he’ll be back for more.

That old rule of “Don’t let your brains show” ought to be changed for 1951 girls. The modern male wants a girl who is an intelligent, independent human being—without losing her femininity.

It’s all very well to talk about making a summer romance last—but first you have to start it going. . . .

A camera, I think, is a splendid ally. And if you have snapshots of a man to send him after you return home you can always write a charming letter to accompany them. Often, I think, men want to continue with a vacation friendship but get side-tracked by other interests after they return to the old routine.

There’s a girl in Hollywood who has made a new life for herself since she’s owned one of those cameras that print pictures within a few minutes after they’re taken. These cameras are more expensive than the ordinary kind, as you’d expect them to be. But one of them would be a sure-fire passport to popularity at any resort—entree into the very group to which you would want to belong.

You see what I mean—the more you put into life, at a summer resort or anywhere else—the more you get out of it. Of course you have to use your head, too.

No use concentrating upon a man who comes from a great distance—so that the possibility is remote of seeing him after the vacation is over. Because another good way to keep a resort Romeo in your life is to have a get-together for some of the men and girls with whom you spent most of your time.

No use either in being the easy-to-get girl. A little affection, a little romance, that’s fine. But there’s always a Big Lover Boy on a summer scene—who gives a girl a big build-up for his own not-good reasons. Be smarter than he hopes you’ll be. Otherwise you’ll become the resort’s conversational piece and lose your chances with the very men with whom a summer romance could develop into a—Happy Ending.