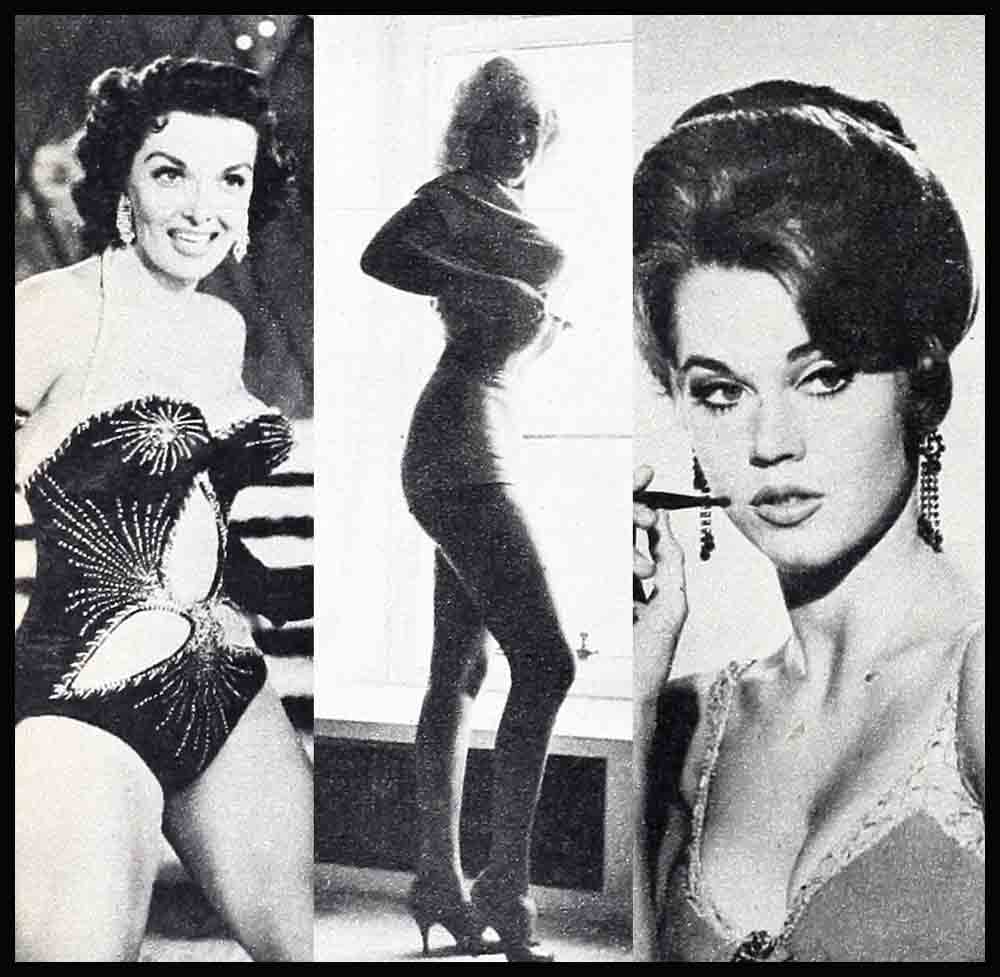 FROM A STOOL AT SCHWABS:

Bobby Darin would have been a nice challenge to Will Rogers. I’m certain Bobby would try to prove to Rogers that Will had finally met up with someone he didn’t like—even a little.

Basically, Bobby is a nice guy but ever since he first entered show business, he’s worn the protective covering of an obnoxious personality. He’s had that who-needs-to-be-liked attitude for years and it’s done much to make him an individual in the entertainment jungle. Now that he’s made it big, maybe he’ll relax and drop the act.

You may not believe this, Jayne Mansfield, Jane Russell, Jane Fonda and all you other Janes who know that large bosoms are Standard equipment for a movie sexpot—but once-upon-a-time it was considered sexy for an actress to be flat-chested. “Boyish-form,” it was called.

Clara Bow, one of the all-time sexpots of the movies—so sexy they called her the “It Girl”—was strapped flat under her gowns and sweaters so tightly she could just barely take a breath.

So don’t you go wishing for the good old days until you know the facts, sir!

This reminds me of Elizabeth Taylor and “Cleopatra.” You know what I mean. You’ve seen those shots of Liz. Well, I don’t know of any actress in the history of the movies who had so much depending on her as Elizabeth Taylor in “Cleopatra.” It has been stated and restated that if “Cleopatra” isn’t a hit, you can kiss the 20th Century-Fox Studio goodbye. And “Cleopatra” can’t be a hit if Liz isn’t a hit as Cleo. No matter what else the picture has.

The closest any actress or actor ever came to Liz Taylor’s frightening responsibility was when Deanna Durbin in “Three Smart Girls” made it possible for the Universal Studio bookkeepers to stop writing in red ink, and Al Jolson sang great enough in “The Jazz Singer” to become the talk of the nation . . . lead the way to the talkies . . . and solidly establish Warner Brothers.

But even though Deanna (practically forgotten today) did supply Universal with much needed money, that studio was not in jeopardy of becoming non-existent. And although Jolson is now sainted for the changeover from silents to talkies, if Jolson had failed, another performer would have accomplished it within the next few years. The talkies were inevitable.

I was careful to State that no actress or actor ever had the terrifying responsibility of Liz Taylor. Because some horses did. It wasn’t a secret, a few years ago, that the fate of the M-G-M Studio was riding on the chariot race in “Ben Hur.” Millions of movie goers thrilled to the race, rooted for the white horses, who won—and so did M-G-M. That’s history now.

It is shameful when the destiny of a great studio depends on the success of one horse race! Or one movie!

It is now happening to 20th Century-Fox with “Cleopatra.” There must be, as Saroyan once wrote, “no foundation all the way down the line” when giant studios—institutions in the industry and the world—are so mismanaged they have to “go for broke” with the shooting of one picture.

I write this with the hope that the money-men and the power-men in the East (New York), who make the decisions and set the policy, will again allow movie-makers to run the studios and call the shots. Everybody’s second business is show business. The butcher, the baker, the candlestick-maker believes he can make a better movie than the one he saw last night. Or produce a better television show. Or write a better play. The banker, the lawyer, the stockholder, always liked to relax after business hours by declaring what’s wrong with movies, television, the stage, Tuesday Weld, Soupy Sales, Katharine Cornell and Kookla. But now, instead of throw-away talk, they’re giving orders to Hollywood. It’s not right.

Take a hint, will ya, fellows?

Despite all the pessimistic talk about “Cleopatra” and the odds against it, I think it’ll be a hit, a good movie. I’m stuck with a thing called hope—and reason. My reasons for thinking “Cleopatra” will be a good movie are writer-director Joseph Mankiewicz (Oscars for writing and directing “Letter to Three Wives” and “All About Eve”) and such fine actors as Richard Burton, Rex Harrison and, of course, Elizabeth Taylor, the only name star who to date can draw them into the theaters by herself. Other box-office champions (Marlon Brando, Doris Day, Rock Hudson, Cary Grant, Frank Sinatra, Marilyn Monroe, John Wayne, etc.) need at least a good movie. And some of them also require a co-star. In “Butterfield 8,” it was Liz Taylor all the way.

Also, I believe Joe Mankiewicz is a fine writer and will have his characters —Cleo, Julius Caesar, Marc Antony, etc.—talking like human beings. This in itself will be a novelty. In all gigantic spectaculars shown on wall-to-wall screens, from “Ben-Hur” to “El Cid,” the actors speak a special language, wooden and unreal, invented and used only in this type epic.

Of course I realize that “Cleopatra” hasn’t the chariot race of “Ben-Hur.” I know all about “Spartacus” and those other epics: “It would have been sensational if it had a chariot race.”

But “Cleopatra” has Elizabeth Taylor. And sex—a powerful combination.

It hasn’t gone out of style yet.

I’ll bet if Cleopatra could know, she’d like to have lived as Liz Taylor does—with all that care, attention and luxury—merely pretending to be Cleo.

I have to say this for Zsa Zsa Gabor and Maria Schell: They do look prettiest when they are smiling or laughing. However, I don’t believe they’re always enjoying the emotion for which a smile or laughter is usually the signpost.

Hollywood can’t win! No matter which way Hollywood plays it, it can’t win. If Hollywood plays the angle that it’s as normal as any town (like when actresses are photographed in the kitchen as good housewives), Hollywood is said to have lost its glamour. If Natalie Wood leaves Robert Wagner for Warren Beatty, the usual talk is, “Well, what do you expect from those Hollywood marriages?” If Doris Day and Debbie Reynolds are publicized as the typical girl-who-lives- next-door, they are forced to change by this chain reaction: “I don’t go to the movies to see the girl-next-door. If I want to see the girl-next-door, I’ll go next door.” It is believed by the spoken and written words that the public (this includes movie critics and magazine writers) wants the stars to have that old-time show-off glamour of Theda Bara, Gloria Swanson, etc. So Jayne Mansfield buys herself an all pink house with a swimming pool which has two hearts engraved on its bottom—on one heart is scrawled Jayne and on the other is scrawled Mickey. And instead of using it she goes out and falls in the big drink and gets rescued from a scratchy coral reef, crying real tears. And everyone from Hollywood, Cal., to Hollywood, Fla., by way of Bangor, Me., calls Jayne Mansfield a gal who’ll do anything for publicity.