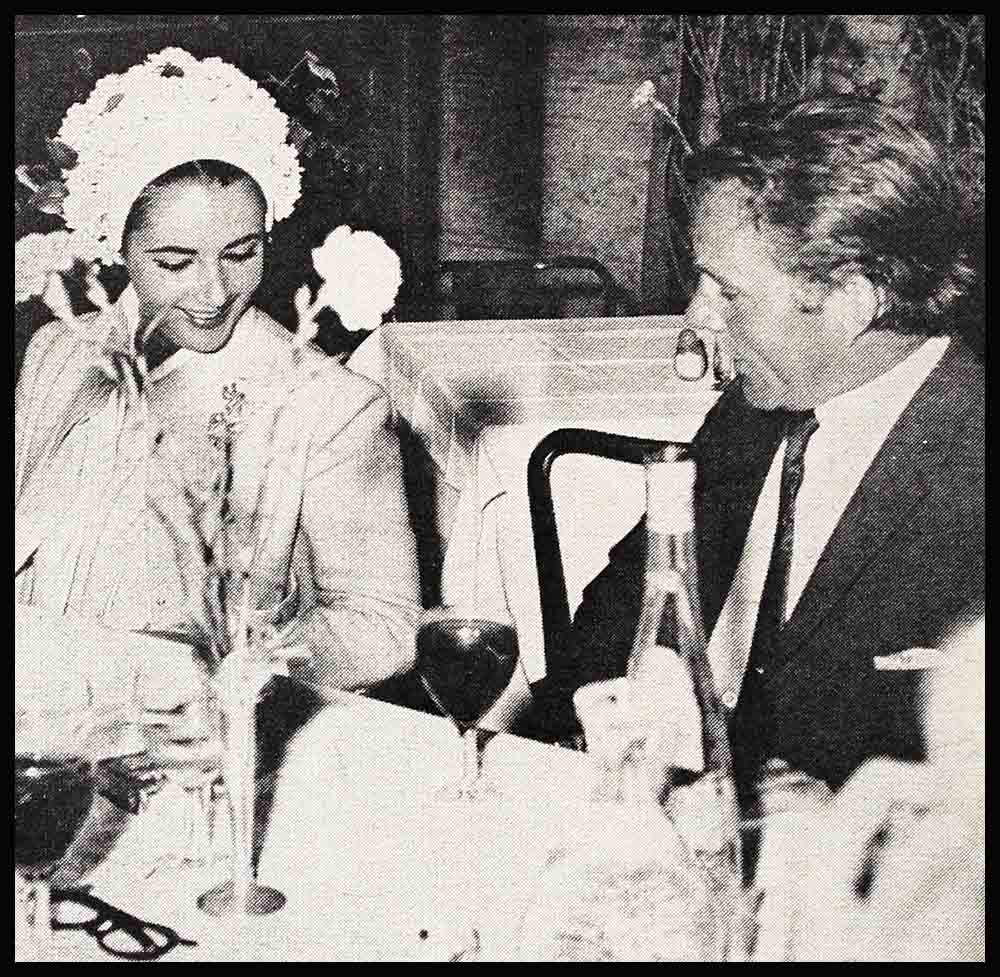 Who Is Richard Burton This Man They Link With Liz?

Richard Burton can be described as a cross between a John Barrymore and Groucho Marx. He possesses the manliness of Barrymore, the quick-brained wit of the comic. In addition, women (especially actresses) find him as irresistible as a Rudolph Valentino.

Burton flows with the kind of British gentlemanly charm that makes a woman feel like a queen. He can fascinate listeners with stimulating intellectual conversation on any subject from Shakespeare to the New York Yankees. He can be as swashbuckling as an Errol Flynn staging a donnybrook in a bar. He has the manners of Cary Grant, the rugged features of John Wayne.

Burton can be tough as nails. He can turn off the charm with a wink of his green eyes. On provocation he can go into a rage. He still carries a small scar from a broken nose inflicted by a locomotive-like punch during a bar-room brawl. This was while he was on a pass from the RAF during the later stages of World War II. He was making the rounds with his buddies in Winnipeg, Canada, when suddenly fists, chairs, tables and bottles started flying. He was flattened with a left hook but not until he had held his ground against tremendous odds.

Above all, Burton is a self-made man who attained success and vast wealth by sheer hard work and determination. Otherwise he could still be working in the coal mines of South Wales.

He was born Richard Jenkins on November 10. 1925 in Pontrhydyfen (pronounced Pontradeven) South Wales, where the coal dust is blacker than any California smog. He was the youngest son in a family of thirteen children whose mother died when Dick was two. An older sister tried her best to be mother to the children while their father worked in the mines.

Richard, roly-poly and unusually bright, found a friend in a school teacher, Phillip Burton, who encouraged him to seek a better destiny than digging for the black rock. When Richard entered the theater at the ripe age of sixteen, he changed his last name to Burton in honor of the mentor who had recognized his genius.

That same sixteenth year, Dick won a scholarship to Oxford. But by the rules, he was a year too young to enter. Now Fate took a hand. Dick spotted an advertisement in a local paper, seeking an actor who could speak Welsh and look twenty-two. He applied and was immediately cast in “Druids Rest” which ran seven months in London. A year later he entered Oxford on his scholarship as an English major. When war came he left to join the Royal Air Force and was trained as a navigator.

After his discharge, acting in films was the last thing in Burton’s mind. His ambition was to be a Shakespearean actor—over the years he had learned all the lines of “Hamlet.” “Henry V” and other works by heart.

Very soon he realized that he would have to play the roles he loved for love—and very little money. Years later, when he could command $100,000 in Hollywood for making “The Robe,” he revealed that on trips home to England he played Shakespeare at the famed Stratford-on-Avon Theater for $145 a week. Now he could afford to play Hamlet for love.

You’d expect the handsome 36-year-old star who sets women’s hearts fluttering with desire, to be a Casanova in real life, too. But not a single divorce has marred his life, and until last February no female entanglements were even hinted in headlines. He had met his love, Sybil Williams—a young, attractive drama student—when he was twenty-three and making his screen debut in a British picture, “The Last Days of Dolwyn.” Two weeks later they were engaged, five months later they married. That was February 5, 1949. Soon after. Sybil gave up acting at her own suggestion.

Richard proved a very devoted husband, a loving father to his daughter Geneva, born in 1951, and later to daughter Jessica, who now is three years old. When he first came to Hollywood to make “My Cousin Rachel” opposite Olivia DeHavilland, his family came with him. They lived with their good friends James and Pamela Mason until they found an apartment.

They always appeared as a fun couple. They avoided the Hollywood nightlife in favor of evenings at home listening to Bach and reading books. Even while making “Cleopatra” on the Italian location, Richard followed this relaxing routine. It was a way of life with him.

Part of the time, in Italy, his wife was with him. They leased a villa only a short distance from the Fishers’, spent many evenings with them. Some compared the togetherness to a different foursome some years back: Debbie Reynolds and Eddie Fisher and their best friends Liz and Mike Todd.

The 5‘ 11“ Burton has never met the same success in this country as abroad. This was probably due to his individuality —he never cared for or went along with the Hollywood star system of using methods other than talent to get ahead. His American pictures, including “My Cousin Rachel,” “The Robe,” “The Desert Rats,” “Alexander the Great,” met with mild success. Yet he never stayed around Tinseltown long enough to be established as a matinee idol.

Probably Burton’s biggest disappointment was in 1959 when he returned after a long absence to make “Ice Palace.” He was high on doing the epic, as he had enjoyed Edna Ferber’s novel about Alaska. The delays in preparing the production signaled the first sign of trouble. He was impatient to begin. And when he did face the cameras, he indicated that he liked the book much better—the script didn’t seem to fit him. The picture was long in the making, and soon rumors circulated about him and a young actress on the same picture. Whether or not they were true—only Dick knows.

“Ice Palace,” incidentally, didn’t even come close to being a blockbuster, but fell more in the flop category.

Today, the Richard Burtons make their home in a spacious forty-room home in scenic Geneva, Switzerland. Only recently did he return to the estate, as he spent a year in the stage hit “Camelot” in Canada and Broadway, then went directly to Rome to play Marc Antony in “Cleopatra.” His quiet life is reflected in his habits, reading and studying etymology, the study of words. Though he both drinks and smokes, his physical condition could win a prize at any gym. He keeps in shape by taking long walks, playing tennis and weightlifting. At fifteen he won his first amateur boxing contest, but in a second bout, with a 30-year-old professional, he hit the canvas in round two and never got up until after the count of ten. That was the end of his prize-fighting. Pugilism’s loss became the theatrical world’s gain.

Like Elizabeth Taylor, Richard knows physical pain. Once while dueling with Jeff Morrow for a scene in “The Robe,” his thumb was slashed so badly that for a time doctors feared he might lose it. Another time, in 1955, his left leg caused him such agony that he was rushed into surgery. Blood poisoning had resulted from a scratch, and he was in danger of losing both leg and life.

There isn’t much Richard Burton hasn’t done or can’t do. He is a polished baritone, a talented pianist. At Oxford he wrote magazine essays. . . . He’s a stickler for technique in acting. Calls it “the essence of getting the biggest possible effect with the least possible effort.”

Richard Burton may not be another Horatio Alger, but he is a self-made man . . . a gentleman and a scholar . . . an individualist . . . and, in the eyes of the ladies, a Don Juan.