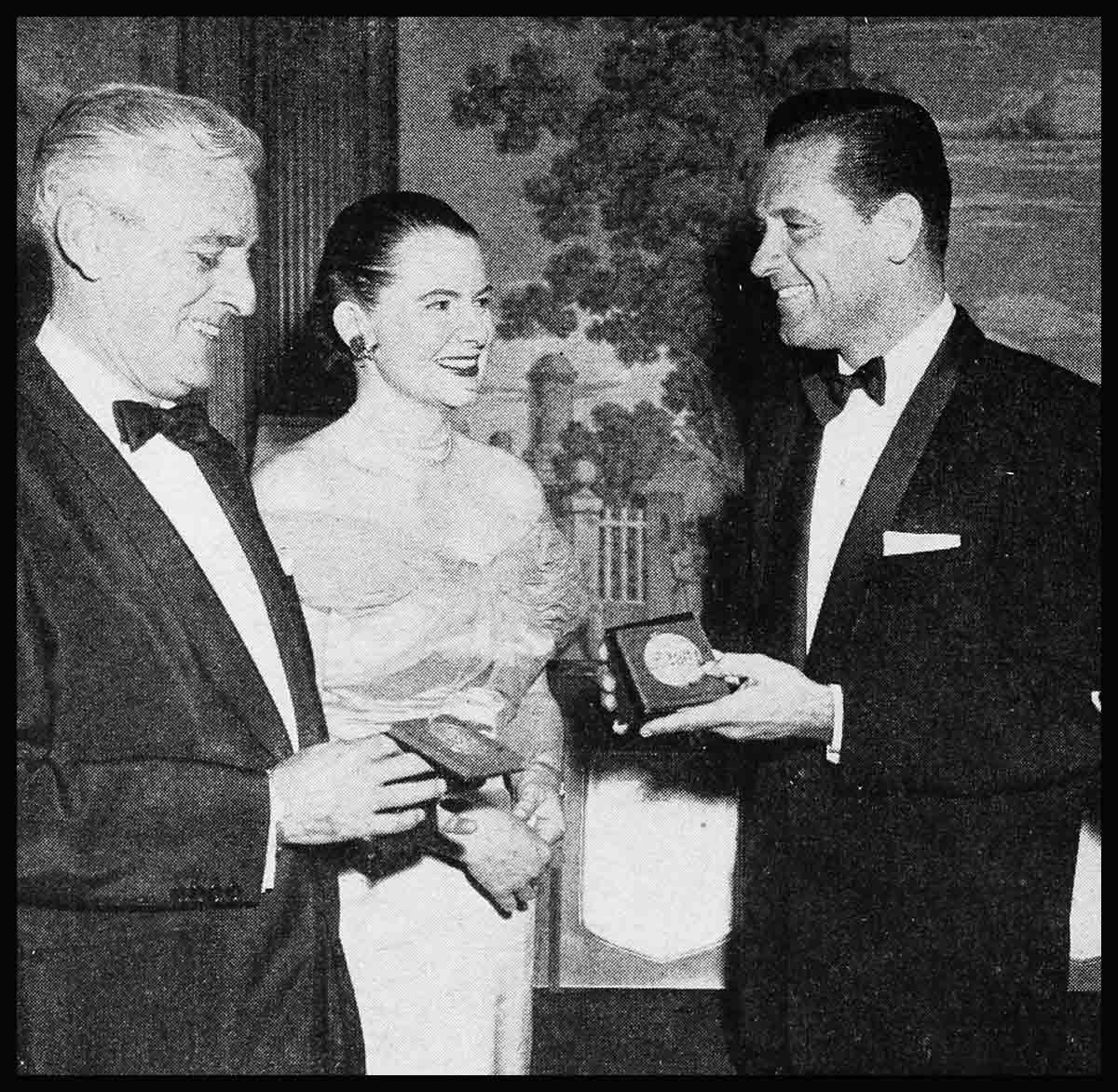 Romantic Carousel: Tab Hunter’s cross-country flight was cloaked in mystery, but we know his secret! He’s flipped his lid over an eastern socialite. But her wealthy father wants Taberoo to stop making movies and go to work for him. Looks like no one is going to win! . . . We’ve got news for Marisa Pavan. Her great admirer, terrifically talented Sal Mineo—who’s playing opposite Pier Angeli in “Somebody Up There Likes Me”—hopes Marisa will visit their set and that her twin sister will introduce them. . . . Believe it or not, there’s a touch of the old-fashioned boy in Marlon Brando. Beautiful Anna Kashfi, India’s gift to Hollywood, has a charming new apartment—which Marlon keeps filled with fresh flowers that he picks from his own garden with his own hands!

For Your Information: When Joan Collins was named the “most promising actress” by Photoplay readers, it made a deep impression. Joan is now more conscious of her appearance in public, but around the house, she still loves those casual sweaters and slacks. . . . And “most promising actor” George Nader has been in a dilemma. Some of his fans want him to marry Dani Crayne, while others threaten to picket their favorite beefcake boy if he so much as dares to pop the question! So George and Dani have decided to “just remain good friends,” and their studio, U-I, is plenty pleased. . . . John Derek and Jody Lawrence may not be feuding, but after their second picture together, “Leather Saint,” they’ve had it. Neither wants to play opposite the other when “Omar Khyam” goes before the cameras! . . . When M-G-M imported a New York actor to test for a role that was perfect for Jeff Richards, the long-neglected guy asked for his release. Instead, the studio gave him his deserving break, playing the romantic cowboy lead in “The Opposite Sex.”

Many Happy Returns: Russ Tamblyn pulled a cute wedding-day gag on his bride, Venetia Stevenson. As you know, they were married on Valentine’s Day, so Russ wrapped up a Joy of Cooking cookbook in a heart-shaped box and presented it to his bride! . . . And Ray Danton knocked himself out trying to find an appropriate first anniversary (paper) present for Julie Adams. She inadvertently solved his problem by sighing over some elegant hand-painted wallpaper costing fifteen dollars a roll. Ray had it delivered—one roll at a time!

His And Hers: everyone from coast to coast was searching madly for Shirley Jones recently, she was sitting ringside at the Versailles in New York! Jack Cassidy, her favorite feller, was singing there and, when 20th Century-Fox tests him in Hollywood, we have a hunch that Shirley will volunteer to assist him with his scenes. . . . Yep, it can happen here! For the first time in her life, Terry Moore didn’t want publicity when she secretly married Panama insurance broker Eugene McGrath. The ruse was effected on New Year’s Day in Las Vegas by marrying under her real name, Helen Luella Koford. John Wayne introduced Terry to her handsome husband, and Gene doesn’t object to her acting career—as long as it excludes him from the spotlight of attention.

Social Life: When Photoplay’s publisher, Irving S. Manheimer, and his charming wife Ruth arrived to prepare for the Gold Medal Awards dinner, the town really rolled out the red carpet. Among the glamorous events preceding the dinner, writer Ruth Waterbury’s party was a stand-out. Among the guests were Russ Tamblyn and his then about-to-be bride Venetia Stevenson; Celeste Holm; Oreste, escorting cute Jody Lawrence; Mr. and Mrs. Jacques Sernas (she’s beautiful enough to be a star, too); and Rhonda Fleming with her Doctor Lew Morrill. On another evening, Sue and Alan Ladd (who throw the most divine sit-down dinners for fifty persons that we’ve ever at- tended) honored the Manheimers with a star-studded guest list. Jennifer Jones and David O. Selznick; Fred MacMurray and June Haver; Edmund O’Brien and wife Olga San Juan; Doris Day and Marty Melcher, were just a few who attended. Another evening was spent with delightful Cynthia and Jack Lemmon. Topping it all off, of course, was the night the Manheimers hosted the Gold Medal Awards dinner, with some 500 guests. Looked upon by Hollywood as one of the year’s most significant events—because it represents the voting by you, the movie-going public—there was hardly a producer or motion-picture star who was not there.

Just Between Us: Sweet, sensitive Margaret O’Brien was greatly upset when the rumor spread that she was bedded down with the mumps. She not only lost out on doing a TV show, but her boyfriends disappeared into thin air, until they learned the truth. . . . Despite all the fanfare, Rock Hudson had no desire to play the virtuous cowboy opposite Marilyn Monroe in “Bus Stop.” Said smart-cookie Rock: “I know when I’m wrong for a part!”

Bag And Baggage: Hollywood may lose a number one citizen if Photoplay’s Gold Medal Award winner William Holden moves his family to Palm Springs. The smog and heavy traffic have been closing in on them and affecting their health. If the Holdens do sell their house and make the move, they’ll headquarter in an apartment when Bill works in Hollywood.

Here And There: Tall, dark and handsome Tom Tryon, Paramount’s new hopeful, is a good friend of the Gary Coopers, which explains why he escorts Mrs. Cooper to Hollywood parties when “Coop” is out of town. . . . Now that he’ll co-star with Katharine Hepburn in “The Rainmaker,” Burt Lancaster’s running off old Hepburn movies to study her technique. . . . Technicolor cameramen working on the set of “Kelly and Me” have been pleasantly pleased, because Piper Laurie and Van Johnson, who are natural redheads, can be photographed without special lighting. It’s the first time in Hollywood history! . . . A deep bow to Jane Russell. Thanks to her wonderful WAIF project, nearly 2000 orphaned children found good homes last year.

Wee Ones: Now that Jane Powell and Pat Nerney are the proud parents of a baby girl, Lindsey Averill, the modern mother has taken a new lease on her professional life. “Nothing but sexy, sophisticated parts from now on,” says Janie. . . . Sheila and Guy Madison, who are expecting their second child on July 4th, plan to select a name for him or her that commemorates the historic day.

Wedding Belle: Even if she didn’t like them, Grace Kelly was a good sport about those inevitable jokes, kidding her marriage to Prince Rainier. As all her friends know, the entire principality of Monaco is smaller than the M-G-M studios. Recently, when the phone rang on the set of “High Society,” Frank Sinatra got a laugh out of Grace when he answered: “Metro-Goldwyn-Monaco!” And, according to personal press agents, everybody in show biz—from Lassie to Liberace—was invited to Grace’s wedding. Actually, former roommate and confidante. Rita Gam. was the first actress to be invited—as a bridesmaid—and Ava Gardner, who’s still in Europe, was the second.

Beautiful Music: Robert Wagner’s good friend Spencer Tracy invited him to “go along for the ride” to Cuba, where they are shooting “The Old Man and the Sea.” But appreciative Bob declined for an exciting reason: He’s suddenly discovered he has an excellent singing voice, and until he makes a trial recording, he refuses to miss his daily vocal lesson. There’s also another new interest in Bob’s life, and her name is Natalie Wood. They met at a publicity party both of them had wanted to skip. Now they’re glad they didn’t, because it was a case of “like” at first sight.

Behind The Camera: Out of respect for Cecil B. DeMille’s “Ten Commandments,” Charlton Heston—who stars as Moses turned down three roles because he didn’t want to play unsavory Rory Calhoun returned from making “Flight to Hong Kong” in China and gifted pal Jeff Chandler with a shrunken head! On his note, Rory wrote: “Now you know what happens to Hollywood producers! . . . Lana Turner doesn’t want to make “My Most Intimate Friend” unless Ava Gardner (she’s perfect for the co-starring role) is in the picture, too. But Ava loves her life in Spain and doesn’t want to do it.

Inside The News: William Campbell, turning down part after part at U-L, hopes they’ll cancel his contract. Hotter than hot at the box office, Bill wants to produce pictures with his talented writer-brother Bob and share the wealth! . . . The part called for an American boy in Doris Day’s first personally-produced film “Julie,” but Doris wanted to work with Louis Jourdan. So they rewrote the role to fit a Frenchman! . . . Tony Curtis did a great deal of praying after Janet Leigh was rushed to the hospital with a kidney infection. Apparently, however, her illness will not affect the baby expected in July. Trouper Tony also substituted for Janet on several TV shows.

For The Record: Hollywood agents should relax—Pat Wayne isn’t going to sign with any of them, and for a very valid reason. “My son is only sixteen,” says his beautiful mother, Josie Wayne. “His father and I both want him to finish school first and then decide what he wants to do in life. Every boy likes to make extra money. Director John Ford is Pat’s godfather, so saying a few lines in his pictures was like working for one of the family. But that’s as far as Pat’s career goes—for now!”

Bedside Manner: The Eddie Fishers may put a registered nurse on their payroll! vacating their house by the sea, because the fog keeps Debbie in a constant state of sniffles. Added to this, four impacted teeth put Deb in the hospital and the surgery sent her into shock. In the meantime, what with his TV shows, benefits and commuting to New York, Eddie came down with shingles. “As soon as we can spare the time,” laughs Debbie, “we’re going to find a nice quiet place to enjoy a breakdown!”

Heady Stuff: That pigtail braid Marisa Pavan wore at Photoplay’s Gold Medal Awards dinner is being copied by every glamour gal in town. Incidentally, those stories of Marisa’s “secret” engagement to Jean Pierre Aumont really embarrassed her, but she definitely does have a crush on the man. . . . Personal to you fans who wonder why Susan Hayward and Janet Leigh still wear long, out-moded hairdos. “If short hair was becoming,” they both say, “I’d wear mine short.”

Hollywood Is Worried About: The painfully thin Ann Blyth, who hasn’t been able to regain her weight since the birth of her second baby. . . . The withdrawal of Gene Tierney and the rumblings of her complete collapse, supposedly caused by the unhappy ending of her romance with Aly Khan. . . . Jennifer Jones’ nervous tension and defensive attitude, which practically prevents her from making public appearance. . . . The air of depression surrounding Elizabeth Taylor, who still insists her marriage is as it should be.

Making Movies: Ben Cooper looked longingly at Marla English for seven weeks, when he was at Paramount making “The Rose Tattoo.” But they never met. So now they’re working together in Republic’s “White Nightmare”—and making up for lost time! . . . Inimitable and amusing Van Johnson tells it about himself: “While I was making ‘23 Paces to Baker Street’ in England,” he grins, “I wore a Burberry coat and Homburg hat on the street. When no one recognized me, I parked the hat and coat and put on my red socks. It was wonderful getting mobbed again!”