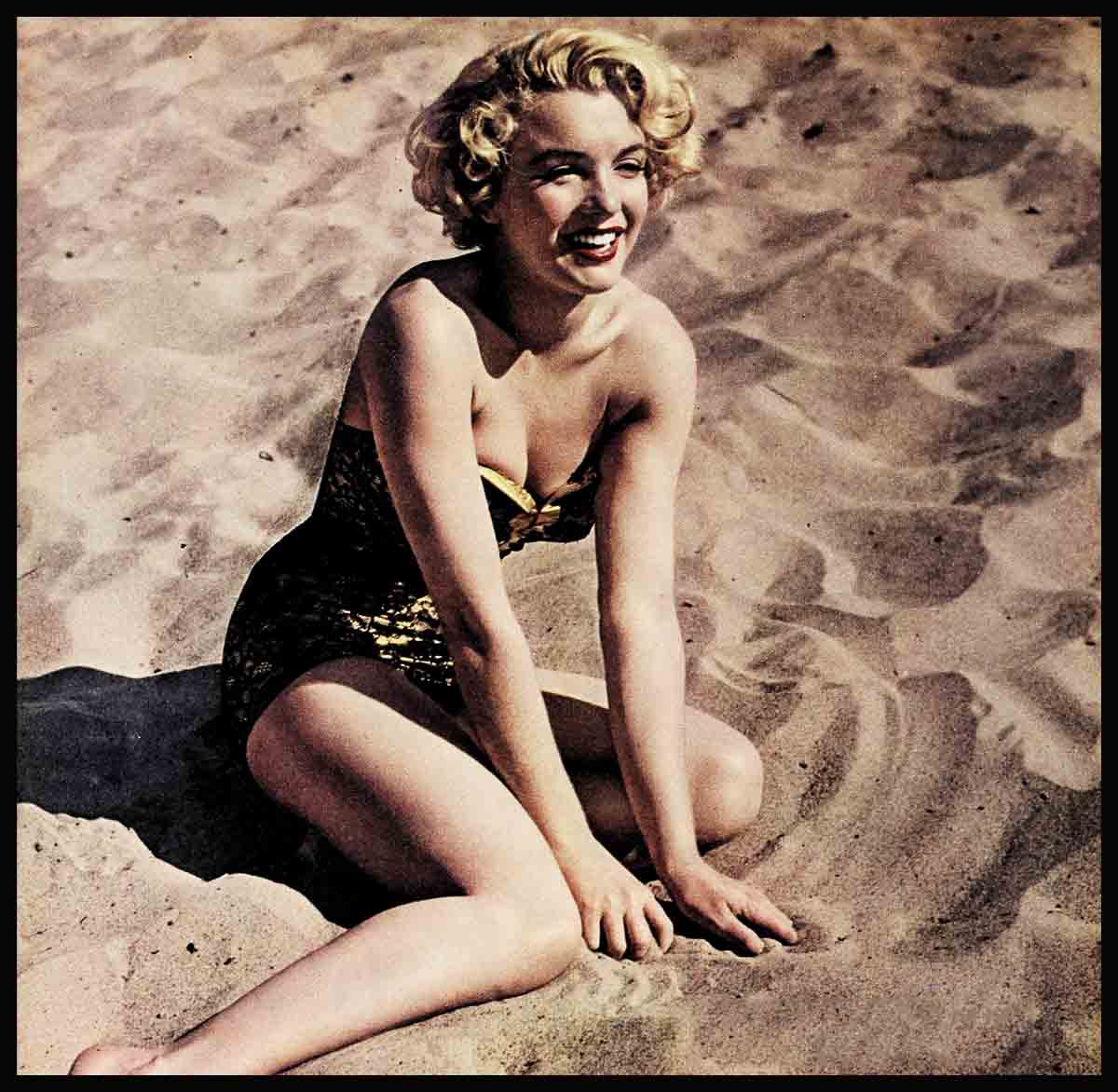 It was at a party one night recently, after I’d finished work on the picture, “Monkey Business.” As I started into the powder room I heard my name under discussion. It was just like that old crack about eavesdroppers. I stopped cold. I certainly didn’t hear anything good said about me. One girl was knocking my clothes. Another was hammering my manners and other things. I stood there dying, just outside the half-opened door, not knowing whether I should burst into the powder room or run out on the party.

Then I heard a third voice, serene and lovely. “But do you know Marilyn?” asked the voice. “Have you really met her? The moment you do, you’ll know that most of the things said about her are false.”

I walked in then to see who was speaking. Eleanor Parker’s eyes met mine, and she smiled like one best friend greeting another. “Hello, Marilyn,” she said. “How nice you look tonight.”

I gulped. “Thank you,” I said. The other two cats left hurriedly. And as the door closed on them, I could feel the tears stinging against my eyelids. The truth was that Eleanor Parker and I had never exchanged a word before that moment, except “How-do-you-do” as we had been introduced to one another earlier that same evening.

Now I fumbled for words. I’m not much of a word girl anyhow, because the best way to talk to men, of course, is to listen. Finally I said, “I honestly don’t know how to thank you.”

“Let’s be friends,” Eleanor said. “That’s payment enough for me.”

Now up until that moment I never, in my whole life, have had but two women who were outright kind to me. I had no family life in my childhood. I lost my father while I was still in my cradle, and I was separated from my mother not long afterward. The state of California and the County of Los Angeles took me over and both did their best by me. I’m very grateful—but how much can you do for a kid when there’s only twenty-five dollars a month to spend on her? I went from “home” to “home”—one an orphanage. It wasn’t till I was eleven that I was taken into a shabby little house in a very beat-up section of Los Angeles. I was old enough by then to expect the worst, and looking at that house—in that neighborhood, I fully expected this to be intolerable. But in that house I encountered “Aunt Anna.’ Her name was Mrs. E. Anna Lower.

She was far from young. She barely had enough to live on herself, but Aunt Anna became a mother to me. She was the first person I ever knew who treated me like a daughter—and like a friend. When she died, a few years later, I almost died, too, from sheer loneliness. I think maybe that is one of the reasons I married when I was one week passed my sixteenth birthday. I simply had to have someone to love, someone to love me. To this day I think that is the most important thing in the world—to love and to be loved.

My marriage didn’t work out. I don’t see now how I could ever have believed it would. I knew nothing. Neither did the boy I married. We had nothing—but raw emotion.

In some ways loneliness is a good thing. It forces you to think for yourself. It makes you act for yourself, to be responsible for your own actions. Its danger is that it makes you settle for too little.

I had settled for too little. But I was lonelier than ever when my marriage broke up. And it was in my great loneliness that I tried to break into movies. And the movie world, when you are unknown and ignorant and shabby as I was, makes your existence even lonelier.

There’s a picture in release right now called “Okinawa,” and to my surprise and amusement, I’m in it. The reason I laugh now is because I never made that picture. But a few years ago I did make a picture called “Ladies of the Chorus.” It was a nine-day-wonder, a so-called musical comedy. I did a song and dance which is now in “Okinawa.”

I remember when I tried out for “Ladies of the Chorus.” I had to see Harry Cohn, who is head of Columbia Studios. I had a cold and I was scared to death. Between the two, I could barely speak above a whisper. Mr. Cohn said, “How can you sing on-screen when I can’t hear you across my desk?” But I did get signed—and subsequently dropped—just as I had been signed and subsequently dropped by Twentieth Century-Fox before that.

Today, I have to watch my diet to keep my figure, but in those days I was watching my diet in reverse, afraid my figure would vanish from starvation. Then “Asphalt Jungle” came along. And with it came my second woman friend, Lucille Ryman, the talent coach at M-G-M.

Whenever anyone asks me how I’ve learned about acting, I say I learned, first from John Huston, who directed “Asphalt Jungle,” then from Lucille. And now I’m learning from Henry Hathaway, who just finished directing me in “Niagara.” If I were ever in real trouble, I feel I could go to Lucille and she would try to help me—without, necessarily, asking “Why?”

Things began to buzz for me after “Asphalt Jungle” was released. I signed another contract with Twentieth Century-Fox, and this time they knew I was on the lot. Last year, I made four pictures. So far this year, I’ve made five—and if they want me to make ten that’s okay by me!

But—and it is an amazing discovery—I find with a certain degree of success that I can’t be the kind of lone wolf I used to be. Up until now, I’ve felt that as long as I harmed no other person and—lived within the bounds of good taste, I could do pretty much as I pleased. But I find that isn’t really true.

There’s a thing called society that you have to enter into, and society is run by women. Until now I’ve never known one thing about typical “feminine activities.” I’ve never been to an all-feminine luncheon. All I know about cooking is how to broil a fine steak and make a good salad. That, you see, is all any man wants for dinner—particularly if you give him something chocolate for dessert.

I don’t sew. I don’t garden. But now that I see a gentle woman—and you can read that both ways and still be right—like Eleanor Parker in action, I’m beginning to realize I’m missing something.

I’ve always felt that a girl’s life—her lust—for living every single minute, should—come first. I still think so. Now I’m tagged “a career girl,” but I believe your ability to live will make your career greater. If you put the career ahead of life, the career—must get smaller, because you have diminished yourself.

A couple of years ago I went to a woman I thought would be friendly and I asked her advice about my clothes. Ever since I was in junior high, the girls have made fun of my clothes. Of course, in junior high, I was gawky. I was five-feet, five, but I hadn’t as yet curved out. ie had the price of nothing. I wore jeans—and stuff, which the boys liked, anyhow.

This woman I consulted, just before I signed my Twentieth contract, said, “You must get suits, masses of suits, six or eight as a minimum. And this costume—jewelry you wear. That must go. Get at least a couple of real pieces.”

I thanked her. I didn’t tell her I didn’t even have the price of a sweater, let alone one suit. As for my costume jewelry, if I’d have thrown that away, I’d have had nothing. I still can’t afford any real jewelry. You see, I’m saving. I want, above all, to buy a house.

But now I can see that if I could discuss fashions with a girl friend who had a little human understanding, it would be fun. And it would be fun, too, to go shopping with another girl. I’ve never in my life had “girls’ talk”—never talked—about men, woman to woman, or housekeeping or any of the rest of it.

I find I’m beginning to want to. I want women friends. You really can’t be friends with a man. It’s either more than that or less than that. But if you had even one girl friend with whom you—could discuss all your innermost thoughts—I do believe it would be very comforting. And very illuminating too.

I’m sure that almost every girl believes” in her inner heart that the most important—thing in life is to have a man love her. One man. But I’m coming to see that that is only—well, not the half of it, but—let’s say the sixty per cent of it. The other forty per cent is having your own sex like you, so that they understand you and you understand them.

That’s why I’ve come to the point where I want women to like me, too. It squares everything up. It makes you live completely.

Or is this just another way of saying, when any girl reaches this conclusion, that she has finally grown up?