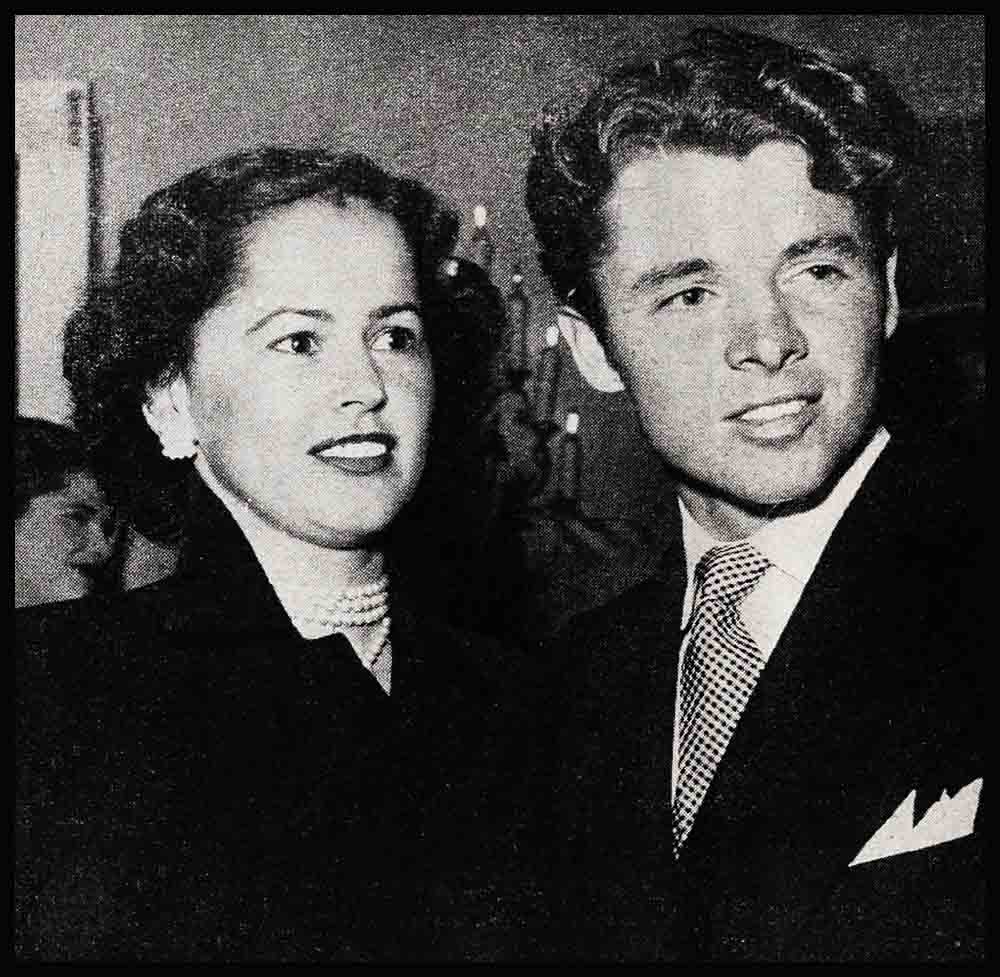 Round-up: A triple feature for Piper Laurie, sitting in a car at a drive-in, looking at Vic Damone’s picture in Photoplay, while she listened to a Vic Damone recording. The gentleman with her? Vic Damone! . . . Wanda Hendrix (who should know) saying she likes Bob Sterling, she isn’t in love with him and doesn’t want to marry him . . . Prediction that Irene Wrightsman, despite her papa’s purported objection, will become Mrs. Kirk Douglas in the near future . . . Cheeta, Hollywood’s most unappreciative ape, snarling at Arlene Dahl, when she visited Lex “Tarzan” Barker on the set … It was a tribute to the first lady of the theater the night Helen Hayes appeared on television as “Queen Victoria.” Hollywood restaurants were empty, the streets were deserted . . . According to John Bromfield, his wife’s speech is so improved, Corinne Calvet now speaks English—when she talks in her sleep!

Down-Under Doings: We’ve got news for Peter Lawford and here’s hoping he reads Cal’s column in Australia, where he’s making “Kangeroo.” Now that her famous father has resigned his post in England, Sharman Douglas is coming to Hollywood—she may even be on her way by the time you read this! Charmin’ Sharman is going to get a job in our town and hopes to live here permanently. However, until she gets acclimated, she’ll stay at the home of her good friend, Elizabeth Firestone. Naturally this revives all those romance rumors. Cal wouldn’t be a bit surprised if there’s a new Mrs. Lawford when Pete comes hopping back from Australia!

Last Laugh: How well Cal remembers that last day when Bette Davis checked off the lot at Warners. Unworthy roles in unworthy pictures and—boom! The word spread like wildfire. Bette Davis was through! Even reporters could have been kinder, for she had always been kind and cooperative with them. Neither bitter nor bothered, Bette made her exit. “It just takes one good picture,” she summed up the situation with a grin. “They’ll be back—they’ll all be back.” Bette was right. The night they premiered “All About Eve” at Grauman’s Chinese Theater, they all were back all back to cheer a great star who gave a great performance. Just a few days previously, Bette’s footprints had been immortalized in the cement of the theater’s forecourt. Now she was looking down at them as bulbs flashed, cameras clicked and the crowd roared. Bette could have yawned. Instead, as we caught her eye—she winked at us!

Around the Town: Barbara Stanwyck convulsing William Holden and the rest of her dinner-party guests, with her impersonation of director Billy Wilder giving his impersonation —of Bill Holden . . . The Cornel Wildes, who own a new Beverly Hills home, dining night after night at Scandia Restaurant . . . Paulette Goddard and writer-producer Cy Howard acting- younger than springtime at a table for two at La Rue’s . . . Bill the doting Dozier showing the sights at Ciro’s to Linda the lovely Darnell.

News—All Kinds: Good news that Hopalong (Bill Boyd) Cassidy has completely recovered from that nasal operation. He personally thanks you fans for those thousands of inquiring letters . . . Bad news that Robert Cummings lost his distinguished mother, an ordained minister and a friend to those in need . . . Reassuring news that Burt Lancaster’s four-year-old son, Billy, will recover from the “mild” case of polio . . . Discouraging news that Lizabeth Scott suffered a torn knee cartilage, jumping from a twelve-foot ledge in a movie scene . . . Fine news that Esther Williams suffered no ill effects from the premature birth of her second son, Kimball Austin Gage . . . Beautiful news that Arlene Dahl is now syndicating her own beauty column . . . Exciting news for Greer Garson, whose imported bull won the shorthorn champion’s ribbon at a New Mexico State Fair . . . Starchy news for Joan Evans who was crowned the “National Macaroni Queen!”

Bride’s Secret: One second longer and Elizabeth Taylor would have burst! “Outside of her mother, I was the only person who knew Jane Powell was going to have a baby,” lovely Liz told us excitedly. “If Jane hadn’t announced the news, I just know I couldn’t have held out!” Their sweet friendship dates back to those school days when both went to school on the M-G-M lot.

Temperature Normal: Up the coast to Malibu, to call on Howard Duff, who fell and fractured his leg in three places. With “Sam Spade” going off the air (due to litigation) and no good movie scripts available, things have been a bit discouraging for Howard. No tears were in order, however. “Meet the highest-priced nurse in the medical profession,” he grinned, as Ida Lupino greeted us. Howard’s accident occurred when he tried to rescue a pet kitten.

Farewell—Two Arms: Unless the plans change, Bob Hutton, who deserves the lion’s share of happiness, hopes to make Bridget Carr his next wife, as soon as Cleatus Caldwell gets her final decree . . . Supposedly “we still love each other,” so Hollywood was naturally surprised when Janis Paige secured a legal separation from handsome Frank Martinelli Jr. . . . Jean Wallace, who was divorced from Franchot Tone in 1948 recently had her “Tia Juana bargain counter” marriage to Jim Randall annulled and now hopes to get legal custody of her two Tone sons . . . They’ve had differences for years, but this time it looks like Marie Wilson will divorce Alan Nixon. Hurdles were added to her none-too-smooth life with Alan, when. Marie became a big star again. There are always two sides—but only one heart that’s as kind and loyal as Marie’s.

Bits and Pieces: Clark Gable with Janet Gaynor and Adrian, shopping for (of all things!) a pet monkey for Mrs. G. . . . Rhonda Fleming’s temperature rising over a doctor she met in Palm Springs . . . Lex Barker and Tony Curtis exciting the other customers in a Beverly Hills jewelry store, but instead of engagement rings—Lex was having his watch repaired and Tony was buying his mother a birthday present . . . Ava Gardner having her fabulous beauty transferred to canvas by eminent artist Paul Clemens . . . Adoring fans driving close to John Derek’s car and booing his butch haircut . . . June Allyson introducing something new in ladies’ undies to the girls in the powder room. She was wearing her husband’s (Dick Powell) shorts . . . Ann Sothern’s rumored engagement to a wealthy Texan and Richard Egan’s silence on the subject . . . Bob Hope’s inimitable comment on his arrival home from entertaining our boys so sensation ally in Korea: “You should have heard the crowds scream when I got off the plane,” cracked the great-hearted comedian. “I unfastened the wrong belt!”

Ham on the Range: Cal was at the airport to meet his old friend Ray Milland, flying in from making a movie is London. The plane landed, the door opened, passengers poured out. Up the ramp came two indignant-looking- gals, who rushed into the arms of waiting friends. “Get a load of Ray Milland,” they snorted. “Just how hammy can you be!” Ray, the last one to leave the plane, stepped out wearing bedroom slippers and a tuxedo! “Don’t look at me like I have two heads,” he yelled at us. “I couldn’t help this. I was doing a broadcast and they insisted on evening clothes. I barely had time to catch the plane when I finished.” We’re glad it happened this way. It gave us a good item.

Hats Off: For years she was a good sport. She always welcomed the press, she posed for corny gag stills when other stars refused, she was the first one at benefits with a smile and a song. Then one day Hollywood producers decided they wanted new faces and names. Agents practically insulted her when she asked them to get her a job. She had saved her money—that isn’t our point. She just wanted to do the work she loves. Naturally she was hurt, but being the kind of gal she is, she didn’t complain. Now comes the part we like to tell best. One day C. B. de Mille sent for her and she got the role of the iron-jawed girl in “The Greatest Show on Earth.” Now the agents are calling again. Producers are frantically searching their scripts for “just the right part” to match her talents. Her friends, and she’s got a million of ’em, couldn’t be happier or more thrilled for—Dorothy Lamour!