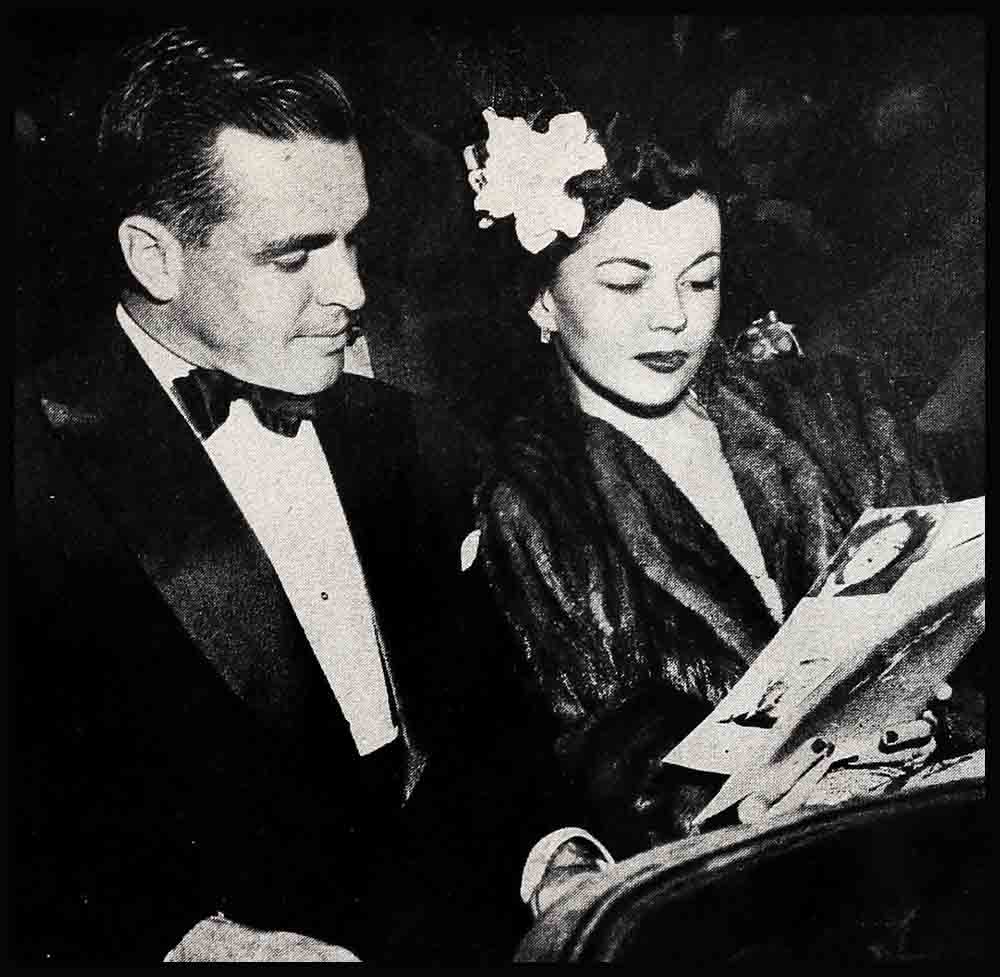 One year before, headlines had heralded the sensational story of broken marriage for the world’s best-known film star.

Now, as this issue rushes to press, all Cupid’s arrows point toward Shirley as Mrs. Charles Alden Black of San Francisco, once again a woman who knows happiness.

It was last January that Shirley, so newly divorced, flew to Honolulu with her daughter, Linda Susan. Behind were the bitter memories, ahead—she hoped—the peace and warmth and forgetfulness of the Islands.

Honolulu gave Shirley not only relief from heartbreak but a sense of purpose in the future. A few days after her arrival she was invited by old friends to a party, a luau, at their home. She must, she told herself, start going out again; otherwise she soon would be a dreary companion for little Susan.

She dressed for the party dutifully while Susan watched, all eyes. Feeling older and more sophisticated than she’d ever felt before and rejecting her golden mop of curls as much, much too naive, she brushed her hair back smoothly and tied it with black velvet. It was to please Susan that she wore the frothy white dress with a decolletage fashioned entirely of white flowers. Little did she dream how soon this would be her favorite dress too.

She saw Charlie Black immediately. Any girl would who was worth her salt. He’s that kind of man. He looks as if he belonged out of doors. His body and his face both are cast in a strong mold. Anc his white teeth in his tanned face give him a wonderful smile.

His looks, however, are literally only the half of it. He’s quite a man, Charles Alden Black. He prepared at Hotchkiss, got a B. A. from Stanford and took a business administration course at the Harvard School. And in ’41, enlisting in the Navy as an apprentice seaman, he served in some of the toughest campaigns in the Solomons, New Guinea, the Philippines, the Dutch East Indies and China. And, because he speaks French, Malayan and several Tahitian dialects, he once was put ashore from a submarine to ascertain troop strength and movements on enemy-held islands. As a result of this, he has the Silver Star and a Presidential Citation.

That night he saw Shirley right away, too Any man would who was worth his salt. Some women harden and age with unhappiness. Others, like Shirley, emerge refined to a poignant tenderness.

Disturbing news this proved to many young women prominent socially in both Honolulu and San Francisco. Charlie was considered a real catch.

For besides Charlie’s personal attractions he’s the son of James Byers Black, a man of importance on the Monterey Peninsula; president of the Pacific Gas and Electric Company, clubman of note, one of the advisory council of the School of Business of the University of California and a patron of music and the ballet.

When Shirley and Charlie met he was on special assignment in Hawaii, as assistant to the president of a large pineapple company. But from the day Shirley came home Charlie managed a surprising number of flights to California. Then, telling his Hawaiian associates and friends a smiling “aloha,” he returned to San Francisco permanently to engage in television enterprises.

Frequently, daytimes, they would go on long hikes. And Shirley, in bluejeans and bandanna, could pass unnoticed.

They went to sports events, too. Last November, for instance, they sat happily through an all-afternoon downpour at the Stanford-Army game. And Shirley, who never used to know the difference between a football and a basketball, yelled as enthusiastically as any Stanford Indian.

Unless all signs fail, Shirley, as Mrs. Charles Alden Black of San Francisco, is to have the happiness that is long overdue her—the quiet, consistent happiness women know only when they’re content in a home with children and a man whom they love and upon whom they can rely. Those closest to Shirley believe she will retire from the screen. But should she, later on, change her mind and want to work again, she will meet no resistance from Charlie. Also, she need never worry—however successful she may be—that Charlie will be known as Mr. Shirley Temple. He just isn’t the type.

To Shirley and Charlie—the good life, the many children and such happiness as is their dream.