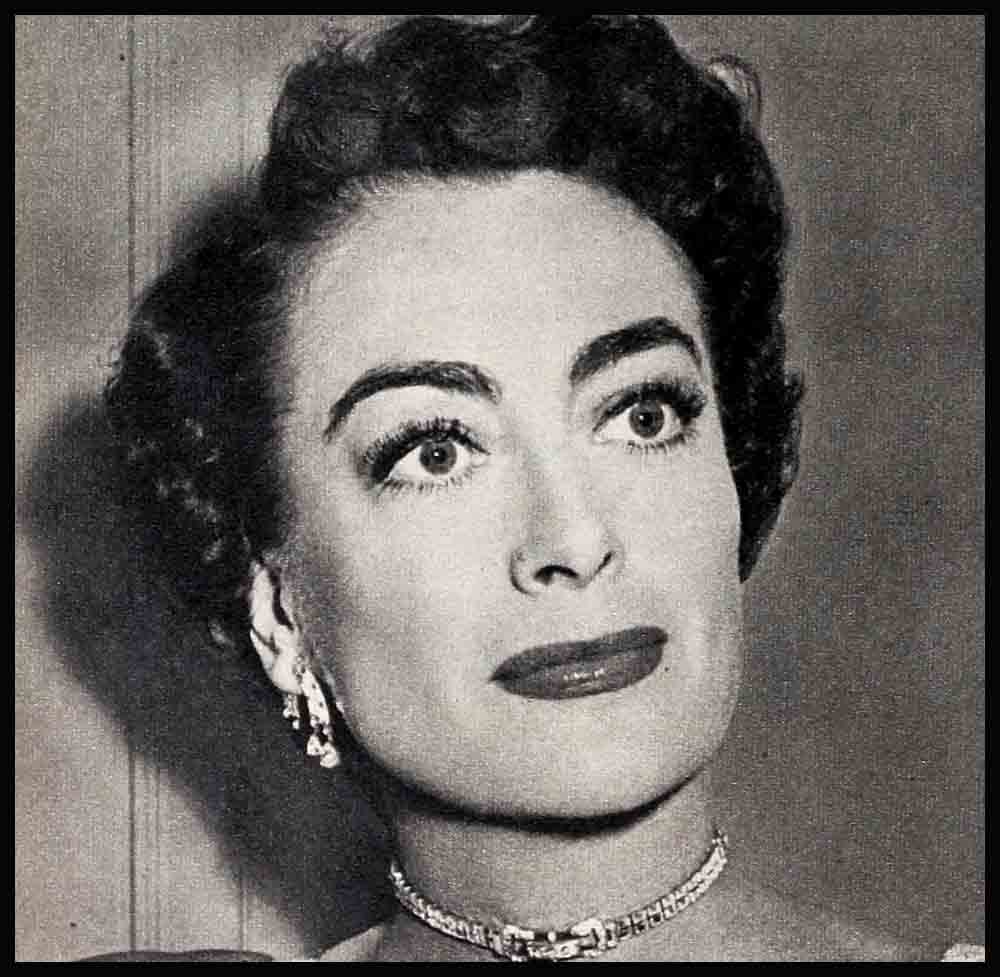 Change! Revolution is more the word! For in the turbulent Twenties the make-up on the Hollywood face was judged more by its weight than by the artistry of its application. Beauty was truly skin deep. But the Hollywood face has come into its own. Today’s use of powder and paint has been reduced to a minimum and the 1953 key to beauty is naturalness.

The question came up during a meeting of movie executives at the very start of Marilyn Monroe’s career. And for a change, it wasn’t the form divine that held the moguls’ attention, but Marilyn’s piquant face.

“Here we have another Jean Harlow,” they were gleefully saying to each other.

“But if she is another Jean Harlow,” said one executive, “we should make her look like Jean Harlow.”

So they called in a make-up man who compared photographs of the two girls.

“We . . . ll,” hesitated the executives, “not exactly. It’s a shame to destroy Marilyn’s natural loveliness, isn’t it?”

How did these changes come about? The Motion Picture Make-up Artists and Hair Stylists, that all-important group who work with the world’s most glamorous women, say that there are several basic reasons. “Today’s young stars,’’ said Karl Herlinger, “have more naturally beautiful faces, and it hurts us to cover up that beauty. But in the Twenties, the whole secret of appeal was supposed to be an oval face. If a star didn’t have one, no matter how lovely she was, we made one! Believe me, for the square-jawed gals this wasn’t easy. It took pounds of putty and powder to landscape those faces.”

The recent trend of pictures about the Twenties raised this very point. Lovely Debbie Reynolds of “Singin’ in the Rain” and cute Piper Laurie of “Has Anybody Seen My Gal?” were scheduled to get the full make-up treatment. This called for circles of rouge on the cheeks, mascara-beaded eyes, heavy-straight brows and cupid-bow lips. Poor kids! They gave them the works for the tests. But one look—and everybody immediately agreed that they could hardly see the girls for the paint, let alone their natural beauty! So the makeup men started all over. Their goal—to achieve the effect and save the face!

But there was a time when even the make-up man knew little about saving face. Facial composition and contour were not in his vocabulary. But glamour was, and Theda Bara had it. “Make her sultry,” was the order. And the make-up men went all out. You recall the straight, menacing brow, heavy mascara and beaded lashes. But you’ll also recall what the results of these were. Two black burning holes in Theda’s face and—no eyes! So the brows began to go up . . . up . . . and pretty soon they went off entirely. They were then penciled back in, arched in a curve and towering.

The extreme fads of the Thirties followed the temperament of the Twenties. A natural outgrowth of this 23-skidoo era of look-alike make-up was the need for individualization. Hollywood immediately set the trend for trade-marks.

“Joan Crawford’s own brand,” recalls William Tuttle of M-G-M, “was the exaggerated lipline. If only the millions of women who attempted to copy it had realized how it started! For Miss Crawford’s famous mouth was an outgrowth of her characterization of Sadie Thompson in ‘Rain.’ And we all know who Sadie Thompson is. In striving for a daring effect Joan emerged with the generous mouth. It evoked so much comment she kept it—and so did her millions of fans!”

“But Joan Crawford,” says Paramount’s Harry Ray, “was equally responsible for bringing back the natural eyebrow line. This was in the Thirties when the brow had reached its peak—high-arched and pencil-thin. I had seen Joan on the screen and wondered why she looked so different. I suddenly realized she had let her brows grow back to their natural shape. And it looked great! So I told Dorothy Lamour that we should try it, and that’s how natural brows returned to Paramount.”

“Pier’s lack of make-up has caused some comment,” says make-up man Bill Tuttle of M-G-M, “but she knows what she’s doing. Her beauty is completely natural and is best left alone. She looks striking with just the barest touches of make-up—almost no lipstick at all. This emphasizes her magnificent eyes instead of her mouth, and the effect is most exciting.

“Debbie Reynolds and Leslie Caron also wear very little make-up. Yet with a slight emphasis upon eyes and mouth, the petite French star becomes the sophisticate, and Debbie turns in to the girl-next-door. Small amounts of make-up artfully applied can and do create whatever effect is wanted.”

“In the Mack Sennett days,” says veteran make-up man Fred Phillips, “clown-white make-up was necessary for many shots. This was because the film was insensitive and needed a bright reflecting surface to register. Sirens like Mabel Normand wouldn’t be found dead without their dead-white faces.

“You would never think technical developments in film would affect the looks of millions of American women. But that’s exactly what happened. Around 1928, a more sensitive film was developed. It required far less light—and, consequently, much less make-up.”

Today, because film is so sensitive, and natural beauties like Jane Russell and Mona Freeman are so perfect, they can face the cameras without any powder base whatsoever. Leading glamour gals like Lana Turner, Ava Gardner and Linda Darnell, who are definitely not the “girl-next-door” type, achieve their sophistication with very little cosmetic trickery but much subtle artistry.

The Hollywood face has changed in two ways—for technical reasons, and because the stars these days want to be—and look—themselves as much as possible on screen and off. Rita Hayworth, when first thrust on the Hollywood scene, was a far cry from the bewitching beauty she is today. She came from nowhere to glamour. Rita first appeared as a plump, dark-tressed Spanish type with a low hair-line. This, she hated. What a striking change she has undergone! Raised hairline, slimmed down, re-colored and restyled hair plus proper use of make-up have helped her achieve stardom—and become a Princess!

On the other hand, Jane Wyman has moved in the other direction. Jane earned her first success as a glamorous “show girl” type. Then her blonde curls were sheared and her false eyelashes dropped. As a result, her particularly unique quality of natural sophistication was revealed.

Betty Hutton, who used to slap the make-up on so heavily it covered all her freckles, and used to pile her hair into architectural fantasies, has toned it all down. Now, her own vibrant personality really comes through. And, incidentally, the freckles do too.

The Flapper, the American girl of the Twenties, overdid everything—her face, her dress and her figure. But as soon as she began to get smart she began to look smart!

The keynote to smartness and beauty today is the accent on naturalness. Take a look at June Allyson, Janet Leigh, Jane Powell and Debra Paget. But it takes brains to achieve the ideal effect—not just born good looks. The idea is to accentuate your best features and still look yourself. The wonderful thing about this is it gives every girl her own personal and exclusive look.

Typical of the natural beauty is Liz Taylor and typical of the exclusive look is Doris Day. What irony, that fortunate Liz, whose face is copied by so many, complains of her heavy eyebrows. “I don’t see why they have to be so hairy,” says she. “Give me eyebrows like Liz Taylor’s,” say the starlets to their make-up men.

As for Doris Day, the natural look is revealed on her face a thousand times over. Her love for the sun has gifted her with countless freckles, and each one, whether large or small, speaks right up and demands to be seen. At one time it was the despair of the studio.

“Please, Dodo,” the executives begged, “cover your face in the sunshine. We can’t cover the freckles for the camera.”

“No,” Doris firmly retorted, “the fans like my freckles—and so do I!”

The revolution in the Hollywood Face has led to revelation! A revelation of natural beauty. And if that’s good enough for the Hollywood stars, there must be some wisdom in it for every girl everywhere.

Check yourself on the following eleven points suggested by the Motion Picture Make-up Artists. Their formula—the formula of the stars—will help you to look natural and be beautiful.

1- Forget what you consider your bad feature—accentuate your good features!

2- A great amount can be accomplished by make-up, but it must never be obvious. It’s better if you don’t know the correct application, not to apply it at all. Observe the stars and observe the ads in this magazine for ideas.

3- Since most people see you in profile or a three-quarter view, always carry your make-up through, such as bringing out your lip-line to the end of the mouth, and applying mascara to the last little lash.

4- Generally applying your make-up with an upward curve gives you a pleasant expression.

5- Follow the natural line of the brow in shaping, but more important, be sure to do away with retracting hairs under the brow line—never on top. Keep brow line clear and clean.

6- Blondes must be extra careful, for their make-up tends to be unusually obvious. Blondes, in applying eyebrow pencil should use ordinary lead pencil and apply to a hair at a time.

7- For true beauty, hair, lashes, brows and lips must balance. If you have light hair don’t exaggerate dark brows or lashes.

9- Always use a make-up base bearing same pigmentation as your own skin.

10- To determine shade of eye shadow for you, follow the true tinge of color already around your eye.

11- Always start your make-up on the base of a shining-clean, well-scrubbed face.