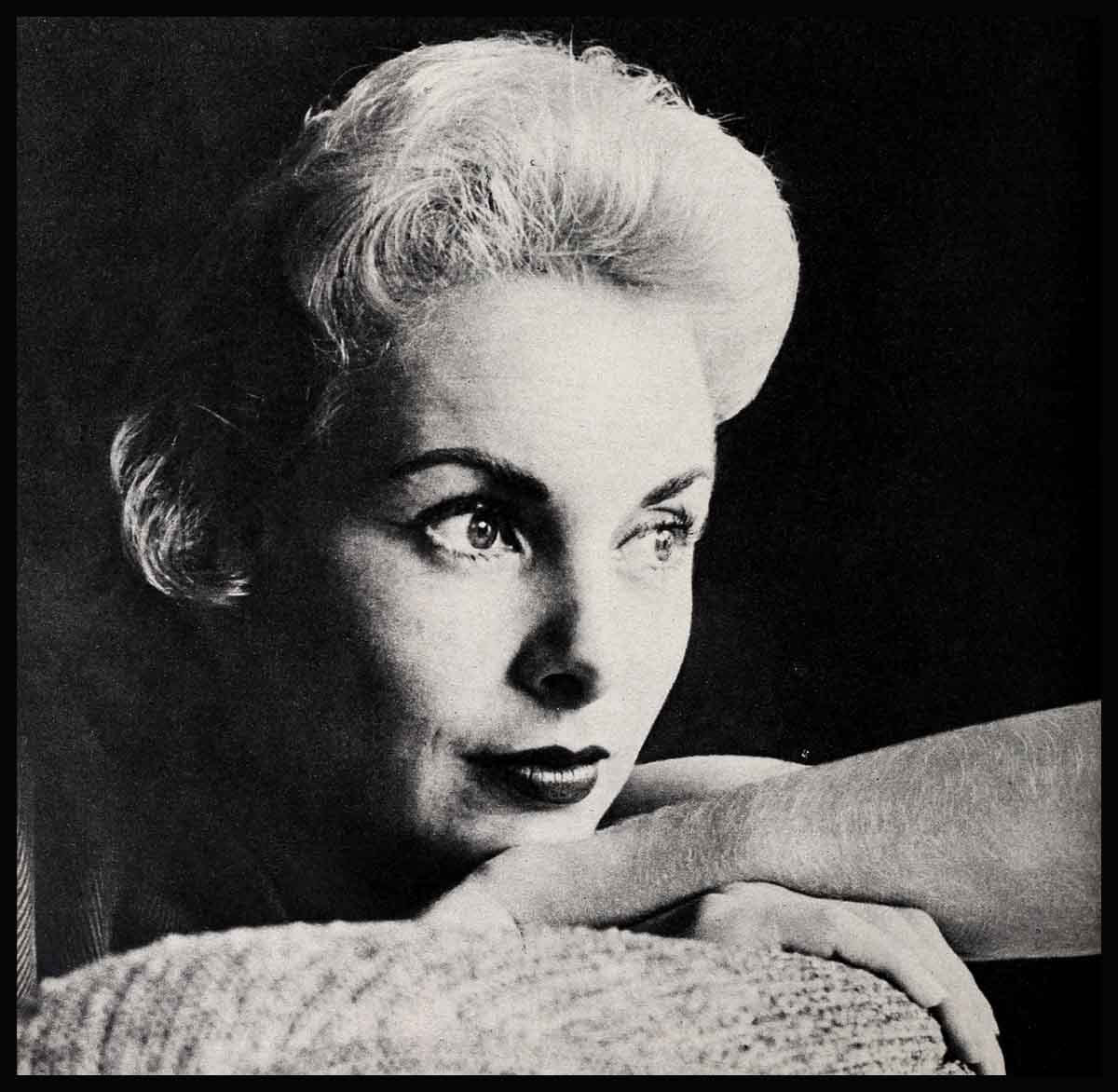 Janet Leigh: “She Held Faith In Her Hand”

At 1:30 a.m. last February 15th, a Cadillac convertible wheeled into the circular driveway before St. John’s Hospital in Santa Monica and came to a stop directly beneath a sign reading: NO PARKING AT ANY TIME.

The tense and worried-looking young man who leaped out and hurried to open the door on the opposite side was Tony Curtis. The girl he helped from the car and gently up the flight of steps through the entrance of the hospital was, of course, his wife Janet Leigh, delicately lovely as always, although at that moment her face was pale and contorted with pain.

The hospital’s marbled foyer was abandoned, except for an operator at the switchboard, a clerk waiting at the admissions desk, and a single uniformed nurse coming down the hall from the direction of the elevators.

“I have brought Mrs. Curtis,” Tony blurted to the admissions clerk. “Dr. Pearl told us to come right away.”

The nurse approached then and, taking Janet’s arm, said, “Come with me, Mrs. Curtis.”

Janet looked back at Tony as she was led away, and the ear reflected in her eyes cut deep into him. Tony stepped away from the desk and started to follow her.

“You will be able to see Mrs. Curtis after a little while,” the firm voice of the clerk decreed, halting him. And now, Mrs. Curtis’ age, please? And in what month is this present pregnancy?”

Riding in the elevator with the white-capped nurse, Janet was silent. She was remembering, with something close to dread, the first time, several years ago, she had made this ascent into the efficient and sterile upper regions of St. John’s.

She had come alone that time. Tony, working on location in the : Hawaiian Islands, didn’t even know, then, that she was losing the baby they had both wanted so earnestly and for so long.

That time, they had shared just a few happy weeks of anticipation. Then, Janet’s sudden illness, and it was all over. This time she had held on—with her body and her iron will—for five months (some of them spent in Europe and Africa where she had made “Safari” with Victor Mature). Why, she had even felt the child moving within her. Tony had felt it, too, his face alight with pride. And the doctor had heard distinctly the infant’s heartbeat. It couldn’t happen again. But then, why this terrible pain?

Several days before, the pain had begun like a faint and ominous warning, but Janet had closed her mind to it. Things were going normally and well. They had to be going normally and well. She had stuck doggedly to her drawing board, sketching designs for her newest line of Janet Leigh dresses. She had even dressed and left the house for a pre-recording session with Rosemary Clooney, on whose TV show she was scheduled to appear.

But the pain hadn’t gone away. As a matter of fact, it gradually grew more intense. Until tonight, when she couldn’t hide the fact from Tony any more. Immediately, Tony had called the doctor, and the doctor had said to come to the hospital—right away.

The crisp white bed was turned down in the private corner room, and Janet was grateful for its coolness when, having changed into a hospital gown with the nurse’s help, she fell exhausted against the pillows.

“Dr. Pearl is in Delivery,” the nurse told Janet as she prepared to leave the room. “She asked me to say that she would be with you directly.”

Then the nurse left her alone—but only for a moment. The door opened again, softly, and a nun approached the bed.

“You and your baby are going to be all right,” she told Janet with quiet confidence. “We are praying for you.”

With cool fingers, she smoothed back the damp hair from Janet’s hot forehead, and then she slipped a small, colored medallion into her hand. The glowing promise of the Sacred Heart.

Before Janet could whisper her thanks, the Sister had gone.

Janet is not a Catholic. She is, as a matter of fact, a Christian Scientist. But there was something about the quiet faith of the nun—and something, too, in the compassionate face of Our Lady as it shone from the slim medallion that quieted her fears.

When Dr. Sarah Pearl came in, still in her obstetrical gown, her patient was quite calm. Somehow, the pain had abated.

Dr. Pearl made her examination with unhurried efficiency. The location of the persistent pain, plus the fact that Janet was running a temperature, seemed to indicate that what she was suffering from was a kidney infection.

The lab would make X rays in the morning, after which they could determine what treatment and what medication were needed. To see her through the night. Janet could have a sleeping pill and a pain-killing drug.

“We’ll all just have to keep our fingers crossed,” the doctor said. “For the moment, the best thing you can do for yourself and the baby is to rest.”

But she wanted, she had to see Tony before she went to sleep, Janet begged.

“Of course,” Dr. Pearl conceded. She is a doctor, but she is also a woman. And she sensed that, in this case, Janet would profit more from a few close moments with her husband than from all the pain-killing drugs in the world.

The X rays confirmed Dr. Pearl’s preliminary diagnosis. Janet was suffering from an infection of the right kidney. Whether induced by the physical changes associated with her pregnancy, or whether it was a flare-up of the infection Janet had picked up some months before in Africa, was not certain. In any case, it could be brought quickly under control with a series of antibiotic injections. Janet would find that her pains would subside.

“And the baby?” Both Janet and Tony pressed Dr. Pearl for the answer to the all-important question.

“The pregnancy, to date,” said Dr. Pearl, “seems not to have been jeopardized in any way.”

“With a little luck, Mr. Curtis,” Dr Pearl interposed gently, “you will be able to take your wife home in a few days if she promises to rest. . . .”

A few days later, when Tony, with the nurse’s help, rolled Janet’s wheelchair toward the auto entrance to take her home, the Sister who had given Janet the medallion of the Sacred Heart was waiting by the elevator.

“Thank you,” Janet whispered to the nun, who, in reply, merely nodded, her face full of understanding.

“We’ll all be seeing you,” Tony said. with a proud grin, “along about the first week in July.”