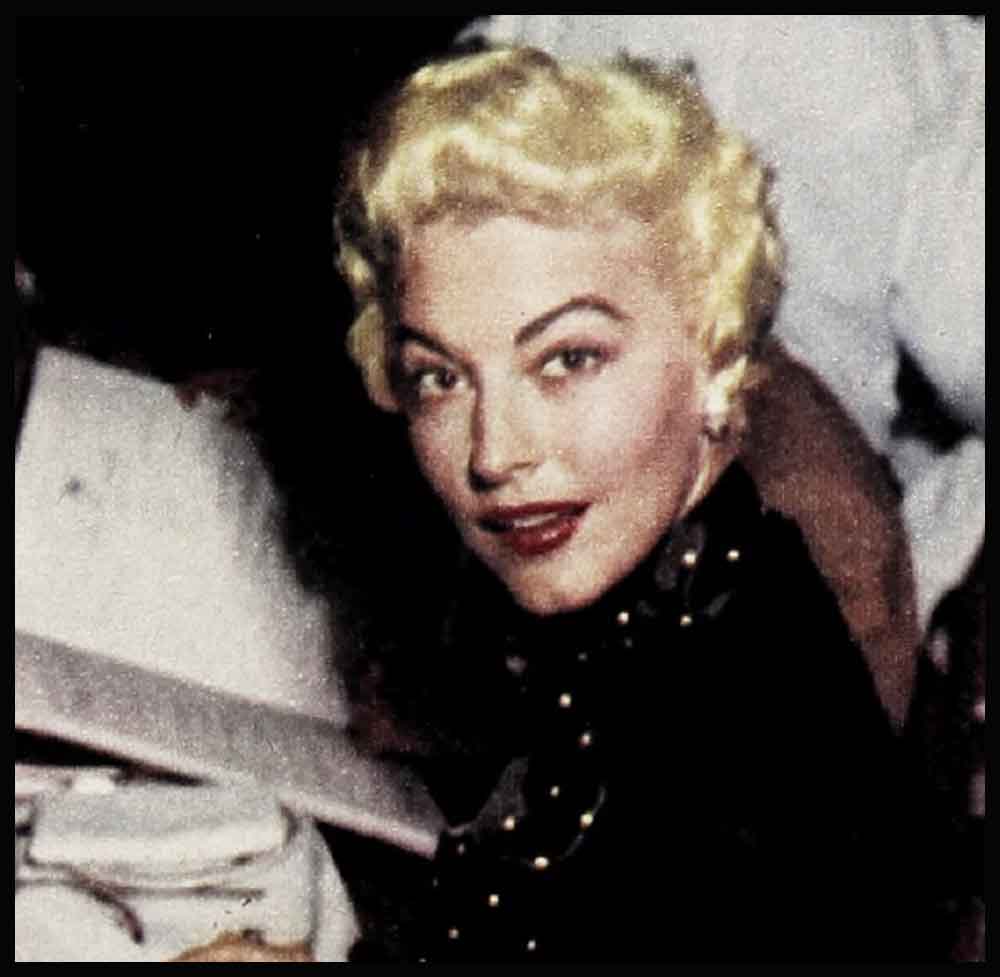 Hearts and Flowers: Theme song for Robert Taylor, as in spired by Ursula Thiess, could be “Bewitched, Bothered and Bewildered”—with accent on the last. The German-born beauty is under contract to Howard Hughes . . . With more dates than you can find on a palm tree, Olivia de Havilland is interested in keeping only one (until after her divorce). This “date” is with the script of “My Cousin Rachel” . . . Mona Freeman’s Pat Nerney is treating his torch to a trip through Europe, although Mona hasn’t followed through on that filed divorce complaint . . . Cameo cuff links that belonged to Vera-Ellen’s father, are Rock Hudson’s most treasured possessions . . . It’s true that Gary Cooper’s daughter isn’t quite old enough to date Bob Wagner. Her mother who does, however, isn’t the right age either.

Baby Blues: Remember when Cal told you that M-G-M was searching frantically for an unmarried Elizabeth Taylor, just in case the original stalked the stork? They didn’t find the pretty lass and, in the meantime, Mrs. Michael Wilding announced she was going to become a mother. With Janie Powell “expecting” again and Ava Gardner still on suspension, there’s no one to replace lovely Liz—but Liz! Writers are working day and night to complete the script of “The Girl Who Had Everything.” Liz will try to make it before she temporarily retires. After the great moment arrives in January, the English nannie who took care of Liz when she was tiny, will again render her services.

Words and Music: Our town, Hollywood, could use a few more uninhibited, but honest souls like Gordon MacRae. He’s always ready and willing to sing and, with that voice, it’s a great break for everyone. Someone, it seems, told Gordon that Cole Porter had never heard his recordings of the famous composer’s songs. The records are wonderful and, being extremely proud of them, Gordon took them along when he and “King” Cole attended the same party. The only raised eyebrows (natch!) belonged to those people present who, were completely without talent. Composer Porter listened and loved every note of it.

Reformed Rebel: All right, so we’ve lost our head. There is a new Shelley Winters! Cal was on his way to the airport the other morning to pick up a friend. It was practically dawn, but there driving along next to us was our gal, Shel. Sitting beside her was Vittorio Gassman, who was being chauffeured out to M-G-M where he’s making “Sombrero.” This wifely duty is performed every morning unless Shelley has to report for work, herself. The new Winters, intimates insist, no longer allows little things to upset her. She now takes time to think them out and she’s definitely more interested in making a better appearance when out in public. While we’d never go so far as to say that Shelley has turned into a demure, domestic buttercup, she does look and act (despite those rumors) like a happily married woman. On her it’s very becoming.

Aloha Oe: Cal contends that stars have to be doubly careful of their public behavior, unless they want to be censored. All of which brings us to Gene Tierney’s farewell party at the Beachcombers. Unfortunately, she didn’t reserve the little room where private parties are usually given. Instead. her long table centered the main room where tourists sat goggle-eyed and listened to loud-voiced remarks meant for “the industry”—only! Kirk Douglas escorted Gene, who left for London to co-star with Clark Gable in “Never Let Me Go.” The Van Johnsons, the Tyrone Powers, and other famous guests were present. Ty seemed to be the only one who was aware of what was going on and showed the embarrassment he felt.

Hot Hips: “I’d like to give a party that’s different from all the rest,” confided Jane Wyman. Cal can only say she did! Janie took over the Tiffany Club, far removed from the glitter and glamour of the Sunset Strip. Red Nichols and his Five Pennies made with the reddest hot music that ever singed a star. The hostess requested the gals to wear gingham, denim, calico and the strapless creations were something that shouldn’t happen to Adrian! Along about it’s-later-than-you-think time, the joint was really jumpin.’ Even Greer Garson and Gary Cooper trucked on down. Betty Hutton and Cesar Romero cut a rug. Personal to Elsa Maxwell: Watch out for Wyman, the two-gun party woman!

Behind the Camera: Although it was tactfully announced that Betty Grable was being saved for something special, she was still deeply disappointed when Marilyn Monroe was given the starring role in “Gentlemen Prefer Blondes.” An ecstatic Rock Hudson plans to call on relatives he’s never met when director Raoul Walsh takes him on his first trip to Europe to film “Toilers of the Sea.”

Room to Grow: The inimitable Humphrey Bogart says he’s married to an optimist. The Bogarts’ new home in Beverly Hills has four extra bedrooms. Lauren Bacall says these are for future Bogart babies! Bogie tells this one on himself: Early one morning in their new house, he went into the kitchen for a cup of coffee. As he walked out, Bogie overheard the plumber say to the cook: “Does he always look that way in the morning?”

Love in Bloom: The wedding bells chimed for red-headed, green-eyed Rhonda Fleming and Dr. Lewis V. Morrill, and thus ends a long period of indecision . . . They knew each other in Hollywood, they met again in New York, so Zachary Scott married actress Ruth Ford in Chicago . . . Married this summer, Barbara Ford (former wife of the late Robert Walker) and cowboy singing star Ken Curtis, are already counting the children they hope to have . . . Joanne Dru and John Ireland deny there’s anything wrong with their marriage . . . Lex Barker and Arlene Dahl have “worked things out” and Dan Cupid is bustin’ out all over!

Love Out of Bloom: John Wayne’s friends are loyal, which is why those “inside” stories on feuds with his “Chata” never reached print. Now that even John admits they are “past reconciliation,” the situation may change . . . Though the Glenn Fords have patched up the particular quarrel that threatened their nine-year marriage, Hollywood isn’t optimistic about their future—together . . . First the kindly Tony Dexter lost his identity playing “Valentino” and now it looks as though he’s lost his wife. At least, they’ve announced separation . . . After so many denials, Maureen O’Hara finally set out for Nevada to divorce director Will Price.

Star Stuff: Cal’s lunch with Jeff Chandler in the U-I commissary was stimulating, humorous and revealing, as always. Unless you hear him tell it, you might find it hard to believe that until recently the big guy felt very unsure of himself. “What has to happen,” we inquired curiously, “to make a star actually believe he is a star? Of course he gets better billing and bigger money (if he’s lucky) but when does a man say to himself—now I am a star!” Jeff grinned, winked and quietly answered: “I guess you know you’re a star when people listen to you—even when you have nothing to say!”

Once Over Lightly: According to a printed report, Hedy Lamarr is having a romance with Joe Mailman (that’s right!), the razor blade king, who supposedly said: “I love Hedy much too much to marry her.” A comedian you all know and love read this report and quietly cracked: “Oh well, Joe can always cut his throat!”

First Nighter: Well, Doris Day finally went to a preview of one of her own pictures! This one, however, she gave herself in the studio projection room. Do-Do rounded up visiting friends from Cincinnati, she also invited the family, the cook and her two French poodles. After laughing and crying their way through “The Winning Team,” in typical fashion Doris opined: “And this was the picture I didn’t want to do!” Guests were served punch, homemade cookies and a great time was had by all. Remember this when you listen to all those stories about wild, wild Hollywood!

Guess-Who Department: A rugged director at a major studio recently refused to discuss roles with two popular young stars, until they washed their faces and combed their hair . . . Ever since enthusiastic fans practically disrobed a virile actor at a Valley studio, his front office insists that he wear underwear at all times . . . An actor no longer under contract was made to believe he presented casting problems. The truth is, his studio was worried over the social deportment of his wife and wary of front-page stories.

Sleepy Time Gal: Those who love Ann Blyth, and everyone does, also love to tease her. Currently the pretty one is managing to take a pretty ribbing from the cast and crew of “The Student Prince.” Prior to playing opposite Mario Lanza again, Ann flew to the Aleutians to entertain our troops there. Unfortunately for her—but not the least bit unfortunate for the grateful G.I.’s—she arrived when the days were a full twenty-four hours long. Annie hasn’t stopped yawning yet!

Hollywood Today: Paramount is pulsating with pride over their great new star, Shirley Booth, who captivated the audience at the sneak preview of “Come Back Little Sheba” . . . After a month’s suspension, Tony Curtis is back on salary but his studio has no new picture scheduled for him. His last picture did not please critic or public. The Brass at U-J are also anticipating further dissension with Tony and are quietly grooming Rock Hudson for the number one spot on the lot . . . Photogenically speaking, Rita Hayworth looks enough like Corinne Calvet to be a relative!

The Older Set’s Young Set: Joan Davis’ eighteen-year-old daughter, Beverly, set maw back on her heels by eloping to Carson City with fireman Lee Bamber. Said Joan: “At eighteen, kids sure do think they know everything.” . . . Bing Crosby’s four sons had hay-pitching help down on the ranch this summer from their celluloid brother, Bob Arthur, who plays Bing’s son in “Just For You” . . . While Joan Bennett toured the country in “Bell, Book and Candle,” her talented teen-age daughter, Melinda, brushed up on acting techniques in stock. Melinda’s hoping to crash Broadway this fall . . . Jenny Hecht, Ben Hecht’s precocious nine-year-old moppet, almost stole the show from her writer-father with her histrionics in his “Actors and Sin.”

Hands Across the Sea: Word has it that the lobby of London’s Savoy Hotel this summer looked like the Beverly Hills and the Bel Air hotels combined. Old home week all the time . . . Errol Flynn and Clark Gable became practically bosom pals overseas. They had never really had time to get to know each other in Hollywood. Errol rented a London town house for his picture sojourn there and Gable was a frequent “Man Who Came to Dinner.”

It is a quote. PHOTOPLAY MAGAZINE OCTOBER 1952