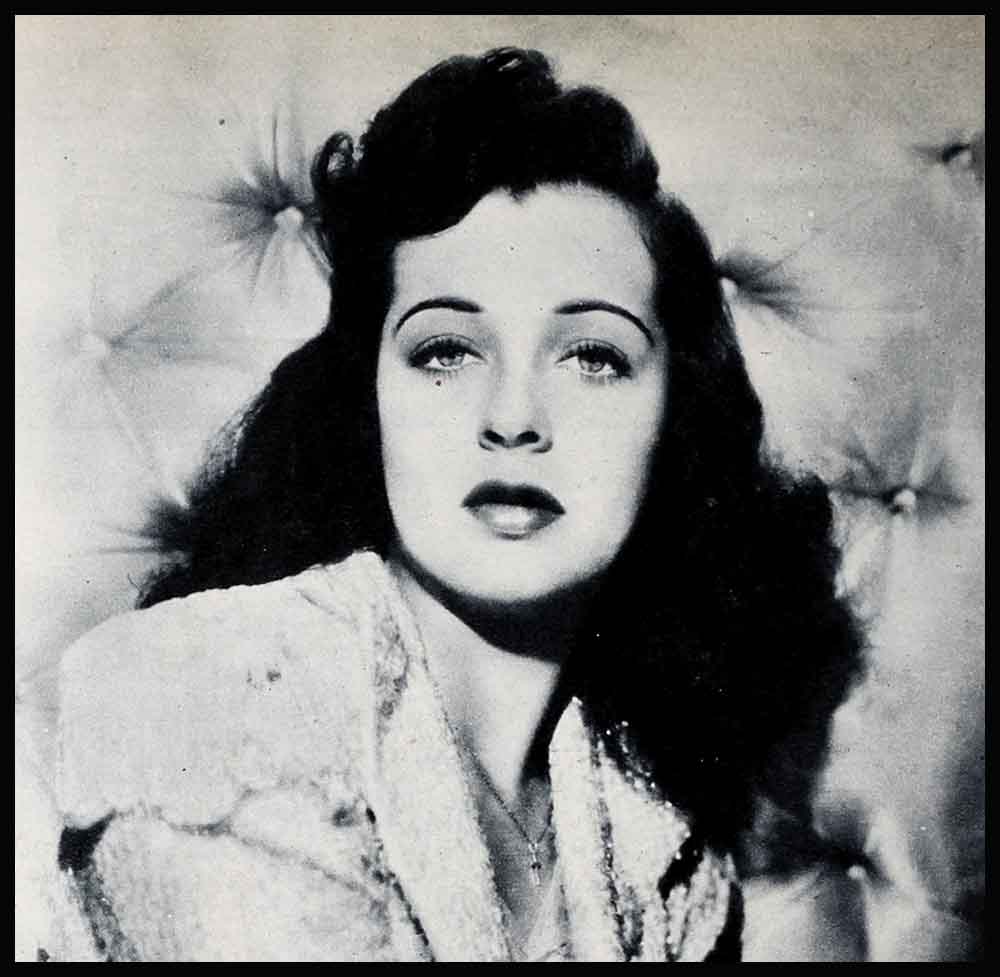 When you gaze upon Gail Russell, you’re gazing at two girls in one. One is the sultry beauty you’ve seen on the screen in “Henry Aldrich Gets Glamour,” “Lady In The Dark,” “The Uninvited,” “Our Hearts Were Young And Gay,” “The Unseen” and “Salty O’Rourke.” And the other? Well, she’s the girl her friends and family know. She’s the girl who opens the door when you punch the bell under the name Russell at a modest apartment house in Beverly Hills—a barefooted t om boy in blue jeans and a plaid shirt, with her dusky curls tied up in a scarf. That’s the girl you’ll hear about here . . . a girl so natural that you’d bet your last nickel she’d never pose on a tiger-skin rug in a black sequin evening gown!

She’d have bet the same last nickel herself, two years ago when she was eighteen and a high-school student. Then, just as now, she was a standout beauty in her looks. Then, just as now, men stopped as if struck by lightning when they saw her coming down the street with her cloud of blue-black curls swinging on her shoulders, her huge black fringed green eyes, and her slim figure—then, as now, clad in slacks and blouses. She was, in short, the best-looking girl attending Santa Monica High School, near Hollywood. Boys called her “The Hedy Lamarr of Santa Monica,” and whistled reverently after her.

But none of this Gail knew or cared about. She was studying art very seriously, and one sunny afternoon she went as usual to her sketching class and sat down before her easel—never dreaming that her history was being shaped a few miles away. While she sketched, two baggy-sweatered boy students of the school were playing hooky, and hitch-hiking while they were at it. They were picked up by a kindly fellow in a big shiny car; and while

they rode along they discussed the most important topic at school, which was Gail’s beauty. The kindly fellow’s ears pricked with interest . . . for he was none other than William Meiklejohn, talent and casting head of Paramount Studios. Once he’d learned that the lovely went under the name of Gail Russell, he could hardly wait to get to his studio office and contact the school. A message was left on Gail’s desk asking her to call Paramount Studios which she promptly ignored, figuring it must be a rib from a student. However, the teacher finally convinced her the message was legitimate. She called the studio from her home and they asked her to drop by for an interview if she was interested.

Gail was interested enough to go see—and by sundown she was signed and sealed as a coming star. But so far, none of the subsequent sequin gowns have removed one inch of gingham from her fascinating figure.

She now lives in a four-room apartment in Beverly Hills with her parents—in the midst of a continual skirmish between herself and her mother, which might be called the Battle of the Dolls. Gail, you see, has one of the largest collection of dolls in the country—dolls of all sizes and shapes, from all lands. It is her idea to lovingly litter the apartment with them, from one end to the other. But nothing is further from her mother’s mind; and every day when Gail leaves for the studio, Mrs. Russell carefully puts all the dolls out of sight. Every evening Gail drags them out again!

A side from this discord, all is peace among the Russells. Every dawning Gail rises (in midriff pajamas, of which she owns eight pairs in every color and print), and gets into a blue or red peasant skirt and blouse and a pair of bright play-shoes. Then she fastens on one of her four pieces of jewelry—all of them gold—consisting of a baby ring, an anklet, a cross, and a St. Christopher medal. Then she does not eat breakfast—she’s never hungry until sundown. She arrives at the studio, and does not eat lunch. By dinner-time, after an exhausting day’s work, she finally has worked up an appetite; and her mother usually puts before her roast lamb, mashed potatoes and creamed broccoli, Gail’s favorite meal. (Unless it’s hamburger steak smothered in catsup sauce, which she can also eat by the plateful.)

After that, Gail is ready to get into her lounging outfit—those blue jeans, that plaid shirt. And off come her shoes! She’s ready to listen for hours to her huge collection of records, most of them Jean Sablon songs. While she listens, she works at her drawing board, with her maltese terrier Corny lying at her feet. She seldom reads. The last book she read was “Ramona,” and she read it eight times—but that was in honor of her pet actress, Loretta Young, whom she’d seen dozens of times in the movie of the same name. After “Ramona,” her favorite story is “Seventh Heaven”; she read that as a syndicated newspaper story years ago and doesn’t even know if it ever became a book. Mornings and evenings she grabs the newspapers feverishly, only for two reasons: The crossword puzzles and the comic strips “Li’l Abner” and “Prince Valiant.” “I like the way those two funnies are drawn,” says she.

Nights when she goes out, which are several a week, she usually moves in herds —her favorite herd being made up of Barbara and Sonny Tufts, Sue and Alan Ladd, Diana Lynn and Carmelita Lopez. To their homes she goes to parties; and when she isn’t going to parties she loves bowling, ice-skating or moonlight horseback riding—usually with Carmelita, who’s her best friend, and a couple of soldiers. (She’s met a lot of soldiers by long-distance introduction through her brother George, who’s a corporal on a remote Aleutian island. But best of all, she likes to sneak out to a movie and sit alone watching the film. She drives to the theater in her small convertible named “Jezebel” . . . we might as well break the news to you that Gail is a name-giver, and that she has plenty of possessions to name!

She’s the proud owner of a horse named “Kelly”—because he’s red in color, like the Irish, she explains—and of ten dogs! One of these is red also, being a cocker spaniel; so naturally his name is “Kelly” too! The others are, in order: “Hank,” half-dachshund, half-cocker, named after her first picture, “Henry Aldrich Gets Glamour”; “Emily,” a miniature schnauzer, and “Cornelia,” a maltese terrier—both named for the authoresses of “Our Hearts Were Young And Gay”; and “Chili,” a pure-bred mutt named because Gail bought him on a Mexican Street in Los Angeles from his owner who was being cruel to him. The other five are nameless as yet—they only appeared recently, born to “Emily” in the middle of Gail’s bed!

The horse and nine of the dogs are boarded out among Gail’s friends until Gail can talk her landlady into a menagerie mood. But Gail goes to see them all regularly. Hank, for instance, is being kept by Petrini, the head waiter of the restaurant across the street from Paramount—so that Gail can drop affectionately in on him any hour of the day!

Now you know almost everything about the sequin-gingham girl, except for a few items: She was born in Chicago twenty years ago, where her father was in the automobile bonding business. Eight years ago, the Russell family moved to Los Angeles so Mr. Russell could retire in peace. Peace was hardly what they found, however; they moved so many times that Gail’s head was whirling—to say nothing of her school teachers’ heads. Gail wound up attending five high schools—Glendale, Fairfax, University, Hoover (for two days—then they moved again), and finally Santa Monica. That completes her history thus far. However, in case you happen to be a man reader, we’d better tip you off on a few of her idiosyncrasies:

She hates to talk on the telephone, so you’d better contact her by telegram or in the flesh, for a date. And if you take her out of a Friday night, don’t go home thinking smugly, “Wonder if she’s dreaming of me?” Because for two hours after you’ve left, she won’t be dreaming of anyone—she’ll be upended in the basin washing her hair! It’s a Friday-night ritual with her, no matter if you’re Gable. And when she’s finally tucked in bed in her midriff pajamas, she still won’t be dreaming for some time. Instead she’ll be drinking milk and eating crackers . . . the worst offense any girl could commit, and sure proof that Gail Russell is made up out of two pieces of cloth: Sequin, and gingham!