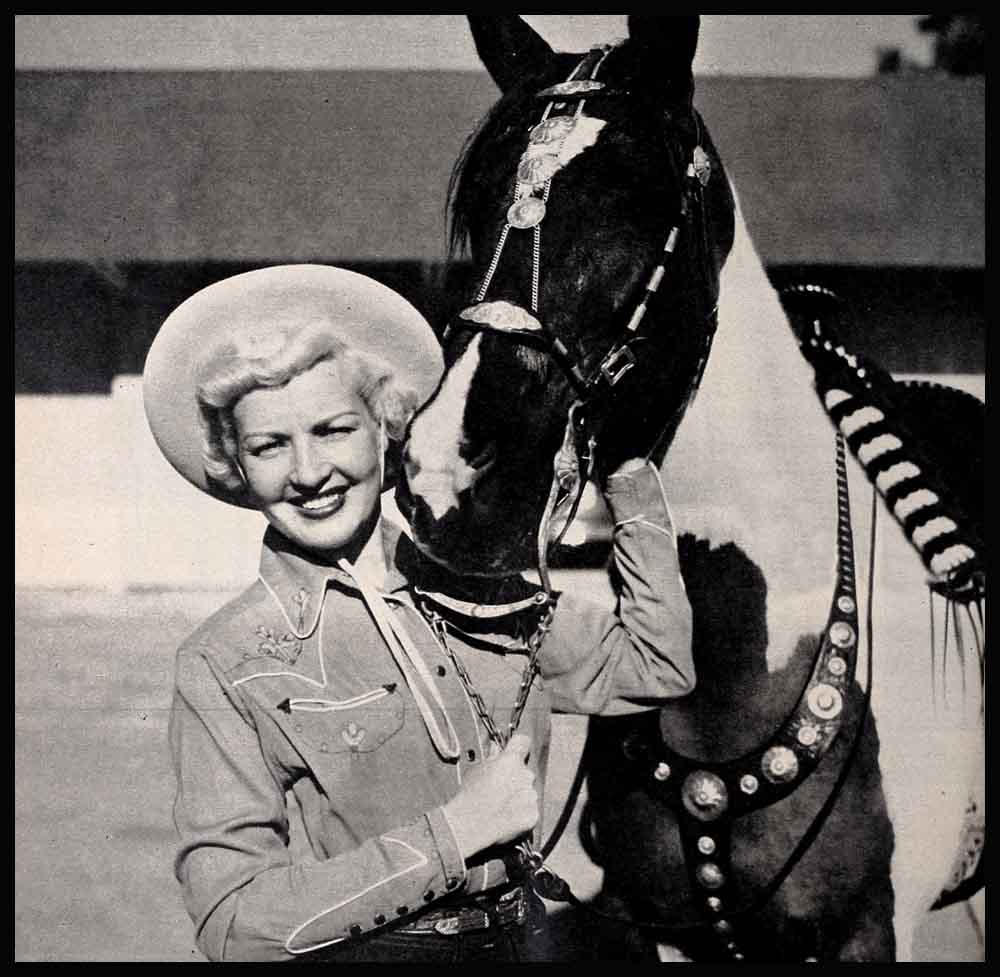 It was a bright early spring morning. Miss Betty Grable bypassed the Twentieth Century-Fox sound stages and drove to Hollywood Park. She parked her blue convertible near the stables. She walked toward Barn 47. Several men in a group were offering comment.

“Just look at those legs!”

Miss Grable, not unused to remarks on the subject, smiled happily. She joined the men who were looking at a beautiful creature with four beautiful legs.

Miss Grable nodded in agreement. “Hes in good shape now. He was fretful and cold so we shipped him to the ranch for a rest. A couple of weeks in the sun put him on edge again. He likes the warm weather.”

Kab, a seven-year-old stallion foaled in the Argentine sun, whinnied softly. Miss Grable put her arms around Kab’s neck and murmured into his ear. She told him he was the most beautiful hunk of horseflesh west of the Allegheny Mountains.

Kab responded, as would any adult male under the circumstances, by looking smugly self-conscious. He dug one hoof into the ground; he rolled his eyes.

Next to her husband, her children and her home Miss Grable loves horses best. She breeds and raises fine Thoroughbreds. She likes to race them for fun and profit.

“It’s a fascinating business,” says Betty. “We get a lot of pleasure out of it.”

The other half of that “we” is, of course, her musician husband, Harry James.

“Someday,” continued Betty, “we hope to go into it on a full time basis.”

“Like Miss Elizabeth Arden?” asked an interviewer. Miss Arden is the fabulously wealthy cosmetician who operates a large scale racing stable, and reputedly selects yearlings for “their beautiful tails,” and has them rubbed with her ten-dollar-a-jar face cream. “Like Miss Arden?”

“Goodness, no,” said Miss Grable. “We’re just small fry in the racing business. We want to keep it that way. More fun.”

Just a few years ago Mr. and Mrs. James were urban dwellers. They went to the races only on special occasions. Then they bought two pinto ponies. “Then,” says Betty, “we had to have a ranch.”

Every spare moment after that was spent in the car looking at ranch property. They found a likely parcel of two acres. Another, five acres. Several more. Finally they found exactly the one they wanted. They bought it—sixty-two acres.

Since then they’ve bought a second ranch, to get more room for paddocks. This consists of 108 acres, fenced and cross-fenced. On the original sixty-two-acre tract they have two ranch houses, barns for about forty horses, tack rooms, stud barns, a hay barn and a short stretch of track.

Betty’s father, Conn Grable, lives permanently at the ranch and oversees things. Betty, Harry and the children go out on weekends and live the life of ranch hands.

There are fifteen Thoroughbreds in the Grable-James stables. The number fluctuates, as new colts are born and some of their bangtails are claimed in claiming races. Brood mares and colts predominate and only three or four horses are now running. Betty and Harry regularly race Products of their stables at Santa Anita, Hollywood Park, Del Mar and Bay Meadows—sometimes even on Eastern tracks.

At present the Grable-James stable is not operating at a profit, but Miss Grable is confident they will have it on a paying basis before long. In the meantime, she points out, it is their one luxury.

“We don’t entertain lavishly,” she says. “And we don’t spend money on fancy clothes or jewels. Right now we’re investing in horses. And in addition to the fun of it we expect to get a return on our investment.”

Harry’s idea of a pleasant evening is to curl up with a Breeders’ Guide. Says he: “I want to keep learning. I want to know this business from top to bottom.”

Miss Grable is also a student. A recent visitor at the James home, knowing only that girl horses are fillies and boy horses are colts, was somewhat astounded at the scope of Betty’s knowledge.

“Racing,” said she, after giving the matter sober thought, “is one of the most carefully supervised sports in the world. The tracks have done everything possible to keep it clean and give the racing fan a square deal. You can be sure that the judges and stewards and other track officials are 100 percent honest. I think a good majority of the owners are honest. And I know the horses are honest.”

“What about betting? Do you bet?” “Of course I do. I think most people who own and race horses like to make a bet. That’s part of the fun. And we’re not betting to make money. When you have a horse entered in a race it adds to the excitement to back your judgment with a ticket on his nose. I usually bet five dollars when ray horses run.”

“What about a system? Is it possible to beat the races?”

“Well, I never heard of anyone doing it,” said Miss Grable. “There’s a well-known saying around race tracks, ‘You can beat a horse race, but you can’t beat the races.’ I think anyone who tries to make money by betting on horse races is, to put it mildly, very foolish.”

The Grable-James racing Thoroughbreds are trained by a husky, smiling ex-Texan named Hack Ross, a fine judge of horse flesh. Hack admires to talk about horses in general, and the Grable-James horses in particular. On the subject of Miss Grable in person he is inclined to wax eloquent.

“She surely dotes on horses,” says Ross. “Understands em, too. Animals have a sense about people. They can tell if you’re afraid of ’em or dislike ’em. And it works both ways. With Betty they know it’s love. So they treat her gentle, too.”

Ross is sure the Grable-James horses will soon be paying their own way. Sentiment, he thinks, is the thing that often keeps a stable in the red. You have to operate on business principles. “Remember, a bad horse eats as much as a good horse. So you have to get rid of him.”

Miss Grable admits this is one of the hazards of the breeding business.’She calls the foals her “babies.”

“They’re so soft and sweet,” says Betty. “And when you select their parents, see them new-born, watch them through adolescence, and keep them healthy until they grow up and get ready to run, it sort of puts the whole thing on a personal basis.”

But she’s intelligent and has a practical turn of mind. She figures there’s a way to work out any problem. And she’ll find it. In the meantime she’s having a lot of fun. After all, this is only an avocation. She’s still Betty Grable, the laughing, dancing, Technicolor star. Still the hardest-working gal in town, still tops at the box-office.

At a recent meeting an interviewer noted Miss Grable’s firm, friendly handclasp, the “good hands” that can handle horses. He noted other things. She was wearing a cashmere sweater and a gorgeous purple shiner.

“Got a new bicycle,” she explained. “The darned thing threw me.”

Seems she took a corner too fast. Went into a dive and whanged her forehead on the handlebars.

“And only one more shooting day on the picture,” said Miss Grable ruefully. “Wouldn’t you know it would happen?”

In the picture, “Call Me Mister,” Betty had Dan Dailey as co-star for the third time. They had some production trouble at first. The story wasn’t right and Betty, for the first time in her ten years at the studio, spoke up. Her fans had written that they wanted to see her in musicals with big production numbers. So Betty held out for more singing and more dancing. “After all,” says Betty, “audiences have put me where I am today. And I think we ought to give them what they want.”

The Jameses have bought a new house. It is a pleasant, rambling affair of white brick. It stands on two and one-half acres that nestle at the foot of the Beverly Hills. There are many trees and a wide-curving driveway. Inside there is a high-ceilinged living room and a den paneled with oak. There are several fireplaces.

“Someday,” Mrs. James says, “we want to live permanently on the ranch at Calabasas. Then we’ll have a regular ranch house, country style. In the meantime the new furniture that we are buying will be things that we can use out there later on.”

Someday. That’ll mean more time for living out in the sun. More time for the laughter of children. More time to watch foals grow strong and learn to run. There’ll be quiet moments and exciting moments. There’ll be moments like that time at Bay Meadows. It happened in the seventh race, the San Mateo Handicap. The prize —$10,000.

Betty and Harry James left the grandstand. They walked hand-in-hand toward the saddling ring. Their horse, Kab, was entered to run.

“Can he do it, Harry?” Betty asked with a catch in her throat. “Do you think he can win it?”

From the ring, yards away from them, Kab nickered. He saw them coming. He stood quietly as his saddle was put on and cinched. Then, as Harry gave the jockey his instructions, Betty reached her arms for Kab.

Back in the grandstand they heard the call, “There they go!” and the race was on. Kab went to the front, running easily. Betty jumped to her feet, her eyes glued to a pair of glasses. “Come on, Kab! Come on, boy!”

At the half, at the three-quarter, and into the stretch it was Kab out in front. And Betty, rode with him every inch of the way, urging him, pleading with him.

Down the stretch Kab heard the call and he never locked back. He hit the wire and he was the winner all the way.

Harry didn’t say anything, but he smiled happily. He hadn’t really seen much of the race. He’d been too busy watching his wife—the girl who talks to horses.