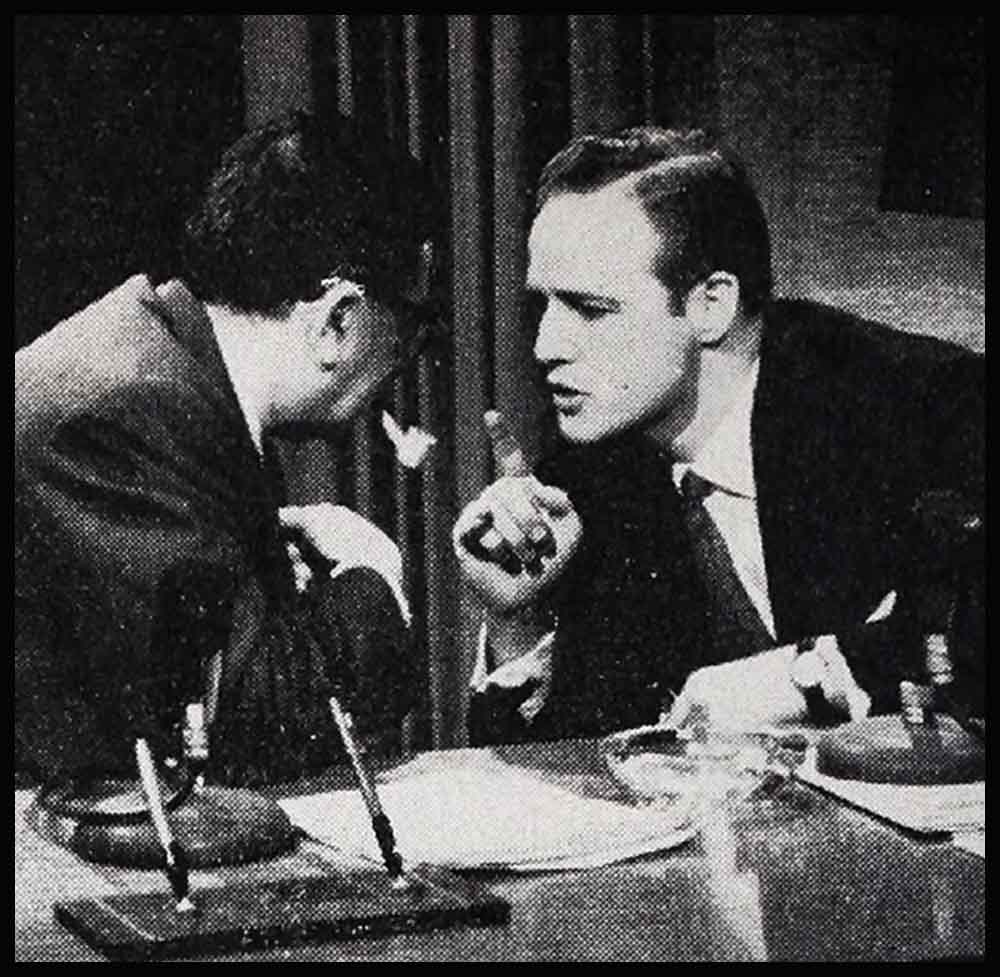 I wonder what MM really thinks of BB. And vice versa . . . Rossano Brazzi should take lessons on how to unbend . . . According to past performances, Deborah Kerr’s off-screen publicity should help her in the Oscar Derby . . . I’d like to have a dollar for every person who stands in the footprints of the stars in the forecourt of Grauman’s Chinese Theater . . . Natalie Wood tells me it’s nice to be married to her favorite actor. And R.J. says it’s just as nice to be married to his favorite actress . . . I prefer lavender to purple because it’s Kim Novak’s favorite color; and also because of that old song favorite, “The Purple People Eater” . . . Because of the many good old movies on TV, there’s big interest in former movie stars who are no longer acting. “What’s Luise Rainer doing these days?” I’ve been asked. Well, Luise, who’s been playing the channels in “The Great Ziegfeld” and “Dramatic School”, is the wife of book publisher Robert Knittel, and has a daughter, Francesca, age 14 . . .

I don’t know a comic who’d welcome an honest ad-lib bout with Pearl Bailey . . . Sophia Loren looks, acts and is now regarded as a Hollywood star. The foreign flavor and appeal are gone . . . Eddie Fisher should make the next best-dressed list … I wonder if Elvis Presley ever read “On the Road” by Jack Kerouac. I wonder if Elvis reads novels. I Don’t hit me. I really want to know.) . . . Stan Freberg on Pay-TV: “It won’t succeed. People won’t pay to hate something they can hate for nothing.” . . . They say Marlon Brando can’t seem to get “Guns Up,” his planned Pennebaker Production, off the ground. Maybe genius shouldn’t mix with business?

I’ve the impression Zsa Zsa Gabor and General Trujillo are wise to each other . . . Joan Collins not only locks every door in her apartment, but has special bolts on every door . . . It’s nice watching those old movies (“Forty-Second Street” and “Golddiggers”) in which Dick Powell and Ruby Keeler sing to each other. Powell is now a movie producer-director (latest is “The Hunters”). But I bet you didn’t know Ruby Keeler (Mrs. Loewe) now resides in the San Fernando Valley, and until recently had a dancing school . . . Believe it or not, but I did see Jayne Mansfield carrying a copy of “The Hidden Persuaders.” . . . Eydie Gorme never had any formal stage training. “I made my mistakes in public,” she told me, “and I corrected them in public” . . . Ricky Nelson looks like a youngster who’s surprised to learn that he’s supposed to be a met Her of the Beat Generation . . . I think one of the most underrated movies of the current season is “Hot Spell.” Shirley Booth, Shirley Mac Laine, Tony Quinn and company set down some truths of middle-class marriage without efforts to perfume it. İf this movie had been made in Italy, it would be regarded as a classic.

Barbara Nichols refers to herself as a young character actress instead of the dumb-blonde type . . . To me, Peggy Lee doesn’t act at being sexy when she sings “Fever.” She is! . . . The youngsters in the movie colony use the attractive album covers to decorate their bedroom walls . . . Did you get a look at Princess Grace Kelly in the newsreels and her latest photos? She’s put on so much weight that she’s wide and matronly. She’ll have to go into training to make a comeback . . . Any Keely Smith fans in the house? I was surprised to learn that Keely Smith was President of the Louis Prima Fan Club in Norfolk, Va. That’s how she got to meet Prima, become his singer, and then Mrs. Prima . . . Cora Sue Collins, who plays Queen Christina as a baby in the old movie on TV, now lives in Mexico City, has several children of her own, may remarry, and is so wealthy she could make her own movies if she wanted to return to acting. That’s Hollywood For You.