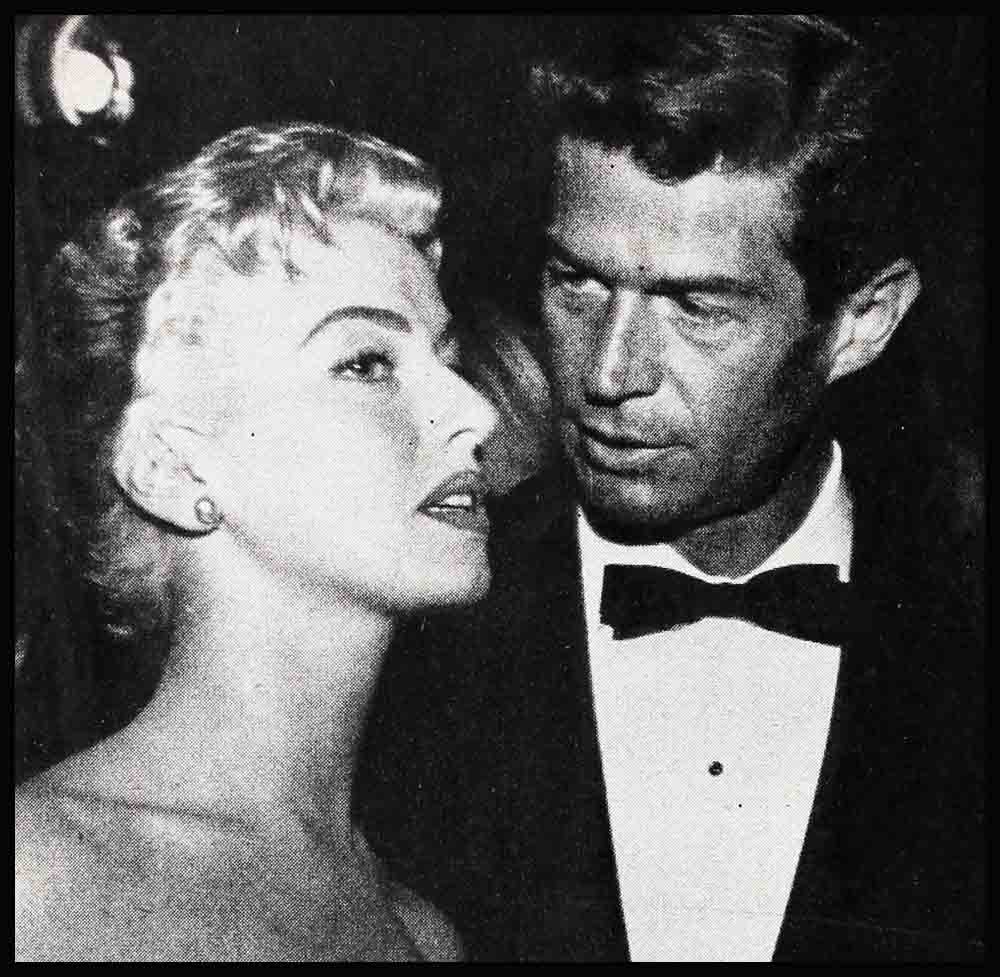 The George Nader Story: We stand ready to post a small reward for anyone who can write this story—or even explain it. Here is a genial. handsome, apparently completely uncomplicated guy who is actually so complicated that no one, including George Nader, can figure him out. While Brando, Montgomery Clift and Johnny-come-latelys to the rebel elan like Scott Marlowe do what the head-shrinkers call “acting out their hostilities,” Nader goes breezing along, calm and unruffled. stuffing all his emotional problems away inside himself. As a result, girls like Dani Crayne, Barbara Rush and Martha Hyer find that attentions from Nader build up to an awful let-down. Dani, especially, was all tagged as the future Mrs. George Nader. As the marriage rumors began, the romance ended. When the rumors ended, the romance resumed. Career-wise, George is equally contradictory. Perfectly willing to admit he’ll probably never win an Academy Award, he writhes inwardly when an interviewer says something like, “After all, you’re fairly typical of the actor who’s pretty much made by the studio, wouldn’t you say?” Nader is one of the most like-able guys in town. He’s getting better and better roles. But, we think, he still likes his cats better than he likes most people. On the other hand, maybe he’s got a point there. Cats, after all, can’t talk back the way too many people can.

Greetings from the President: Ben Cooper read his draft notice with the same reaction any boy would have. Sure, he wants to go and sure, he wants to do his duty. but gee whiz, did it have to happen now? Ben’s latest picture for United Artists was “His Father’s Gun” and he was all set to start something new when the letter came. So he tucked his best girl’s hand under his arm and, again, did what any other young boy would do—had one last fling. complete with black tie and steak for dinner. before packing his bag and heading for the barracks and reveille of an Army training camp. But he’ll be back!

Don’t Count on It: When you see Jeff and Marge Chandler looking so in love that you almost feel embarrassed at being a witness to it, take it with a grain of salt. Maybe their remarriage will last forever, and everyone hopes it does. But Jeff’s moods are so unpredictable and his temper so swift and stormy that anything can happen. It’s true that Jeff was pretty miserable during their separation, and that he missed his children even more, perhaps, than most fathers, being a singularly solitary soul. But that Jeff is a hard man to get along with can be attested to by countless interviewers and would-be interviewers, and the fact that the resultant loss of publicity hasn’t helped his career does not faze him in the least. Well, we’re all for independent characters and God bless them. But, like elephants. they’re usually nicer to look at than to live with. The success of “Durango,” which Jeff just made for United Artists, may give him a happier outlook.

Tag Along: That’s what they’ve been calling Nick Adams lately, pointing to his constant attendance upon Elvis Presley and remembering a similar devotion that sparked his friendships with Natalie Wood, the late James Dean and Kim Novak. As Nick himself has said. he’s too good an actor and has much too much potential in his own right to exist merely as a celebrity’s shadow. But methinks Nick pro-tests too much about his friendship with Elvis. Instead of denying that he’s riding on Presley’s coattails, the best thing for Nick to do would be to settle down and make another picture. one in which he can t do as competent a job as he did in “The Last Wagon.”

If at First: Cliff Robertson and Felicia Farr are two young people who would seem to have had much too much of the wrong thing. picture-wise. Felicia is a very good actress whose career somehow never got off the ground. and Cliff Robertson started bis Hollywood career with a bang in “Picnic,” then seemed to have ended it with a whimper in “Autumn Leaves.” Cliff is now making “The Girl Most Likely” with Jane Powell, and Columbia is giving Felicia a big build-up for “Three-Ten to Yuma.” We think in Cliff’s case he has tried too hard to pretend that success didn’t matter. He’s given everyone else the same idea. Wanting success is nothing for which to apologize, and neither is Cliff Robertson, who has the makings of a very fine performer. Lately, he relented enough to be willing to be seen here and there with the proper date, at the proper places, though he’s still a confirmed bachelor and a confirmed commuter to New York and his tiny Greenwich Village apartment. But maybe he and Felicia will both disprove the old Hollywood adage that “If at first you don’t succeed, you don’t succeed. Period.”

Thou Shalt Not: Charlton Heston long ago chalked up the most important “thou shalt not” in his own life when he made up his mind that a man who cheats on his marriage, even lightly and unimportantly, is headed for trouble. “It’s just not worth it.” said Heston, shaking his handsome head for emphasis. “You lose your wife, lose your home and, sometimes, even your career.” Lydia was Chuck’s first girl and it looks as though she’ll also be bis last aml best. Chuck’s performance in “The Ten Commandments” made us glad that he’s as sensible as he is talented. Because he’s right: A good many careers have been washed down the drain when personal lives got out of control. This is the value of Heston’s private “Code of Conduct.”

Local Doings: The newest feud is the one between Eddie Fisher and his longtime friend and manager, Milton Blackstone. Since Eddie’s Coca Cola hour was can-celled, he seems to be getting the career jitters. Good reviews on his RKO movie “Bundle of Joy” may put the light back in his eyes, but things are a bit tense. Of course, during the Debbie and Eddie romance Blackstone was charged with being the heavy who didn’t want the lovers to wed. This was not true, but it is true that Milton felt it would be a mistake for Eddie to marry at that time. The fact that the young singer’s popularity has waned so sharply seems to prove Blackstone might have had a point. . . . Cesar Romero keeps going ’round and ’round. Now he’s dating Anne Baxter, who’s making a career comeback thanks to her performance in “Ten Commandments.” . . . Elizabeth Taylor is here today, gone tomorrow, and no one, including Liz. seems really sure what she’s going to do next. Incidentally, Miss Taylor is reported as being less than flattered at hearing Natalie Wood described as a “young Liz Taylor.” . . . The whole town is pleased that the Jimmy Dean hysteria has finally died down and that his fans are at last willing to let the lad rest in peace. . . . The people charged with translating the Elvis Presley rage into box-office receipts at the movie houses have a special problem. Hooky-playing teens crowd the theatres at first. So what happens when they go back to school on a non-holiday?

The Happiness Boys: John Ericson may not have fulfilled the early hopes M-G-M had for him, but his marriage to Milly is so happy it’s enough to make up for almost any disappointment. The happy-though-marrieds in the film colony include the Bill Campbells, Rock Hudsons, the newlywed Greg Bautzers, Don Murrays (Oooh! so happy, these two!) and the back-together-again Jeff Richards. The success that brings some unhappiness seems to have acted in reverse with Jeff. He and his bride of less than a year broke up when his career was limping, got back together when success showed its face.

“Character” Actor: We’re happy to hear that Marlon Brando hasn’t really settled down to being as polite and neatly dressed as was reported. Latest Brando story to come our way tells of Marlon having dinner with the Mel Ferrers and the King of Belgium. While Mel and the King conversed loftily in French, Brando chattered happily away in jive talk (which he never uses). When Audrey refused to be amused or to take her eyes off her husband, who sat across the table, Marlon spotted a slight rip in her dress, yelled happily down the table, “Hey, Audrey, your dress is torn.” Ruined the whole effect.

Happy Hunters: Tab Hunter’s spirits are slightly on the rise since they’ve inked him in for “Lafayette Escadrille” and Jeff Hunter seems to have settled down nicely into bachelorhood, with fewer and fewer people thinking he and Barbara Rush will re-wed, despite their mutual devotion for their son. Tab’s another young man who seems to think the best things in life are more easily had if pursued all alone.

Baby Daze: That’s what Jean Simmons and Stewart Granger have been in ever since the arrival of daughter Tracy. The name confused newsmen, who wired their editors that the Grangers had just acquired a son! Neither Jean nor Stewart cared which they got as long as it was healthy. Happily she’s also pretty.

News Item: All his hundreds of friends were saddened to read that Humphrey Bogart had to check back into the hospital. But maybe it isn’t as serious as people fear. . . . Kim Novak still can’t seem to stay very far away from Frank Sinatra, while Ava Gardner, staying far, far away, lets it be known she still isn’t thinking of getting a divorce. . . . Jeanne Crain and Paul Brinkman are now looking very lover-like, so friends expect they’ll reconcile. Marriages end in Hollywood, but sometimes they’re made there, too—or remade.