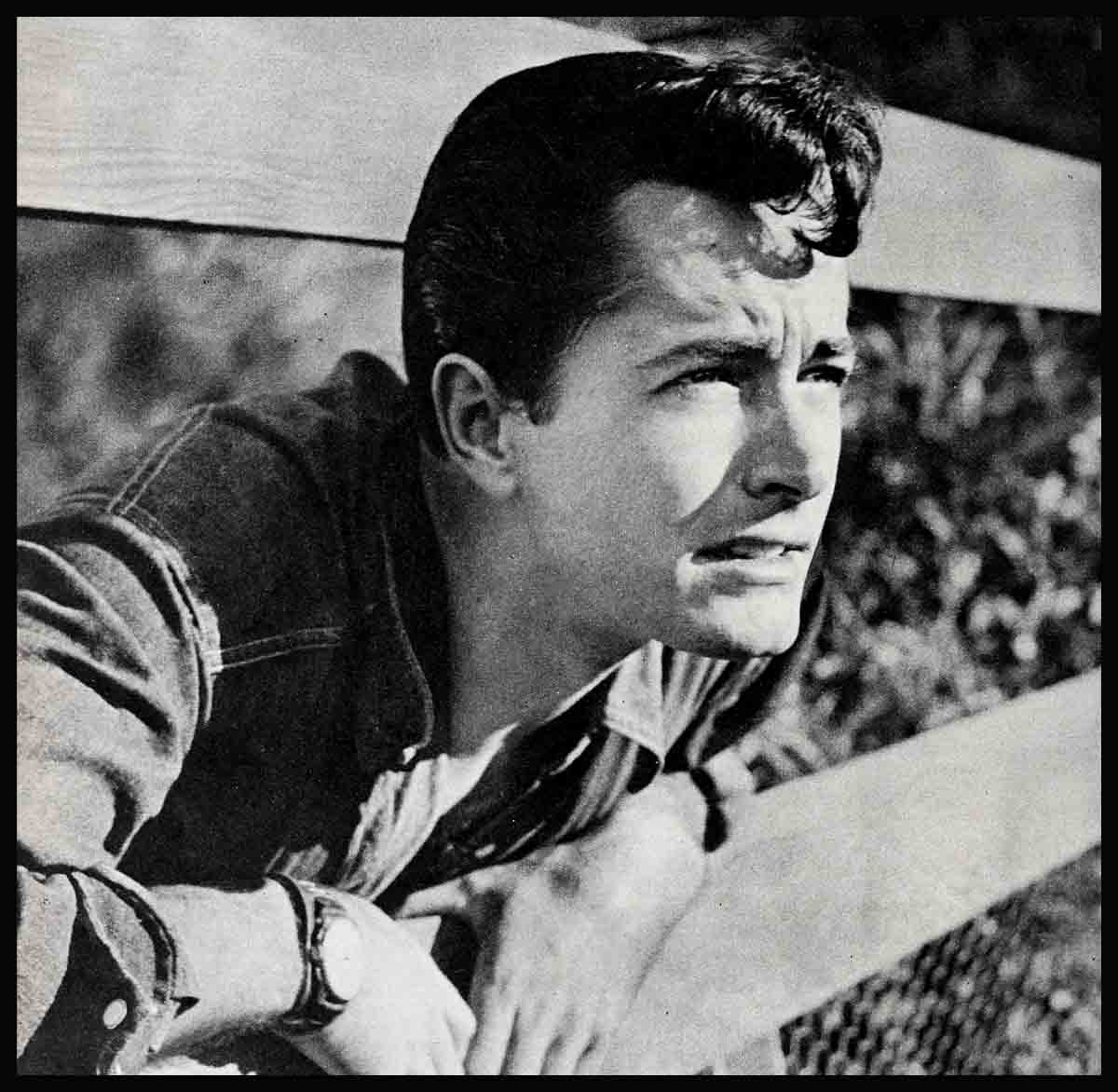 He may once have had the dubious reputation of being a weeper, but the fact is that now John Derek is strictly a rejoicer. He’s rejoicing over his freedom from a long-term studio contract, rejoicing over his first role as a freelancer in Republic’s “Red Horizon.” He’s happy about his family, and most importantly the whole family—Johnny, his wife Pati, and their three-year-old son Russell—have been eagerly awaiting the new baby.

For some weeks both Johnny and Pati have been gearing young Russ to the idea of a new baby sister or brother around the house. Recently Johnny thought the time had come for him to bone up for a birds-and-bees pow-wow with. his son, but Russ gave him a reprieve when he came running up to him the other day.

“Daddy,” he cried, “I know where the new baby is coming from!”

Pati quickly put her hand on Russell’s shoulder and suggested to him, “Now dear, you’d better run off and play.”

“But I do know, Mommy,” Russell persisted in having his say.

Johnny shrugged helplessly, and Russ blurted out his piece.

“You buy them!” he shouted happily. “Everything comes from the store, doesn’t it, Daddy?”

This was a pre-natal theory that would have charmed Darwin, and for the time being at least, it placated Russell’s parents.

If Russell is pardonably naive for his three years, his daddy is no less innocent. John has had his cap set for a girl, and he’s made no secret about it.

Not that Johnny is trying to influence his son, you understand, but at least once a day, he has had a heart-to-heart talk with Russ and asked him if he’d like a little sister.

John’s indoctrination has had a strange effect on Russ. He thinks that each time John asks if he’d like a sister, he’s added another baby girl to his menagerie. Russ is very generous about the whole thing. He now goes around the neighborhood offering fresh little sisters to all his friends.

The problem of weaning Russell from his baby room has been handled by John with all the consummate masterminding of a military campaign.

“I think I’ve finally convinced him that it would be wise for him to decide on another room,” Johnny says, “because he’s getting to be a big boy now, and should have a big bed. I’ve got him to the point where he’s agreed that only little babies should have little beds.”

As for the baby, the Dereks have it all pretty nearly figured out.

“We’re going to try to bring the baby into the world,” John says, “without a lot of frills. None of the unnecessary things, just the vital things. In the beginning, we’re not even going to have a bassinet. No kidding. They’re impractical and they’re just dust collectors, anyway. We’re just going to put the baby in the crib Russ slept in for three years.”

Johnny explained that there was also a psychological aspect to this which concerned Russell. He and Pati are taking every precaution to keep Russ from feeling abandoned or neglected and consequently building up a resentment against the baby.

“If you pile up a lot of frills and satins and laces for the baby,” Johnny thinks, “and Russ goes on with the same wardrobe and no fuss or bother, and he has to sleep in another bed while we fix the baby up in a new bed, you know he’s going to get his feathers ruffled and think we’ve let him down pretty badly.”

What John and Pati figure on is giving the new baby to Russ as his very own.

“I think he’ll take everything all right under those circumstances,” John says.

Russ was born a month ahead of schedule, and his parents got caught with their nursery down, so to speak. They had deferred their baby shopping according to timetable, and the result was a frantic, last-minute shopping safari.

“There’ll be none of that this time,” John asserts. “We’re buying the whole shebang, layette, the works. This time we’ve got it all beforehand. We’re prepared.”

But Pati hasn’t been laden with knitting in the traditional fashion.

“There’s no point to it,” Johnny maintains. “You spend nine months knitting something. Then the baby wears it once, gets it dirty, you send it to the laundry, and you can’t use it anymore.”

John and Pati get along very well without making an issue of it. They seem to have an easy, happy and unlabored relationship. They are effortlessly nice to each other. There is a closeness there that cannot be denied.

The coming of the baby has cemented the bond between Johnny and Pati, and clearly gives the lie to the reports that crop up now and then that they’re not hitting it off too well. Johnny doesn’t play coy about it, either. He knows the gossips have been at work, and he is willing to discuss it forthrightly.

“Sure we’ve had our arguments,” he owns up as Pati nods. “We’re two strong personalities. But we don’t melt away over a difference of opinion. We might scrap one minute, but the next minute we don’t even know what it was about. Nobody gets hurt—unless they stand outside the door and get their ears bruised.”

While John insists that he doesn’t pamper Pati in any way, it’s more likely that he simply isn’t aware of doing anything beyond the call of habit and decent instinct when he is considerate.

John and Pati and Russell constantly attend the Reseda and Van Nuys Drive-In Theatres in San Fernando Valley. They’re there every time there’s a change of program. And John has one idiosyncrasy when he attends drive-ins. He arrives early so he can park his Cadillac in a stall right next to the snack bar.

This isn’t because John likes to watch the movie from that vantage point.

“It’s just so Pati won’t have to walk so far,” he confesses sheepishly.

Someone asked John why he didn’t take the station wagon to drive-ins instead of the Cadillac. His reply:

“The Caddy is more comfortable for Pati.”

The fact remains, however, that for years it has been fashionable in Hollywood to feel sorry for John Derek. “Poor John” tales have been the vogue, and the crying towel has been out for him almost from the moment he first stepped before the cameras as an actor.

When John got his release from Columbia after completing “Mission Over Korea” there, jaded Hollywood gossips immediately began to feel sorry for him. But not John!

“Look at me,” he says. “I’ve got a wonderful and beautiful wife, a wonderful and handsome son, and another baby on the way. I’ve got a swimming pool, a Cadillac, a station wagon, two fine German shepherd dogs that eat me out of house and home, an Arab stud colt named Faisal, a full-blooded horse named Wild Eye. And I’m finally my own boss!”

About his release, John is quick to set the matter straight. “It’s not that I had anything against the studio. It’s just that I’ve always felt better on my own. I asked for my release before—well, since four months after I finished ‘Knock on Any Door’—but I was always turned down. This time they said okay, and I’ve never been happier.

“I may not know where the next picture is coming from, but the offers are coming from all directions. I’m doing ‘Red Horizon’ with Joan Evans, and I’ve had offers for independent pictures in Europe, Mexico and South America.

“I know just what I want, too. I want to show people that the John Derek face and name they know are not the only things I have. I want a chance to show a little emotion in my face; I want a story where you’re called upon for some acting.”

Many of the “Poor John” stories began with the illness of his son Russell.

“I deeply appreciate the fact people were concerned,” John says. “I know a lot of people prayed for Russell when he was ill, and Pati and I were touched. But Russell is three now, and he’s fine. You could drop him off the Empire State Building and he’d be all right.”

There is another possible reason for the rash of sympathy for John Derek. He arouses the mother instinct in women—when he is honest, they feel that he is hurt; when he confesses ambition, they weep that he is discontented, when he admits restlessness, they sob that he is despondent. Even his friends offend him with unwanted and unprovoked sympathy.

John was lolling around the house with Pati and Russ after winding up his role in “Mission Over Korea.” A friend called him on the phone.

“What you been doing?” he asked.

“Oh, nothing much,” John drawled. “Just working around the house.”

By no stretch of an overworked imagination was John complaining about inactivity. He was merely taking it easy, by choice.

But his friend felt impelled to cheer him up.

This sort of thing happens all the time.

“Very often,” John says, “people call me up and say too bad so-and-so got that part. They’re dying to sympathize with me—when the truth is, I was never even up for the part!”

The minute John admits to anybody there’s something he’d like to do that he’s not doing at the moment they decide something is making him unhappy. Many of John’s friends are top movie stunt men who work with horses, and he frequently spends time with them at Corrigan’s Ranch, where they shoot a lot of Westerns and stage Wild West shows. One afternoon John confided wistfully to a cowboy friend, “Some day I’m going to fight a calf.”

The cowpoke eyed John as if he’d gone bereft of his senses. “Why, you durn fool!” he snapped. “You’ve got what most guys would give two legs for.”

John had said nothing about giving up movies—but just because he’d expressed an ambition to do battle with a calf, the cowboy assumed that he must be fed up with his lot as a screen star.

Johnny does plead guilty to many ambitions. He takes his profession seriously and wants to advance in it. He’s realistic enough, and honest enough, to covet the rewards that come with advancement.

Both Johnny and Pati have been like a couple of enthusiastic kids about the new baby’s coming. And after hours of discussion they decided it would have the same name, boy or girl.

“If it’s a boy, we’ll call him Sean,” John decided. “If it’s a girl, Shawn. They’re spelled differently, but they sound exactly the same phonetically. And if the baby doesn’t like it later, it’s always easy to adopt a different nickname.”

As to a new baby altering plans to take advantage of those picture offers abroad, John doesn’t think so.

“Why should it?” he asks. “She’ll be able to travel when she’s four months old.”

Boy or girl, the new Derek baby has an interesting life in store—possibly the most itinerant of Hollywood infants—diapered in Madrid, burped in Paris, tucked into bed in London.

But nothing pretentious. No frills, satins or laces. Just a devoted big brother and a couple of stimulating, adventurous and loving parents.