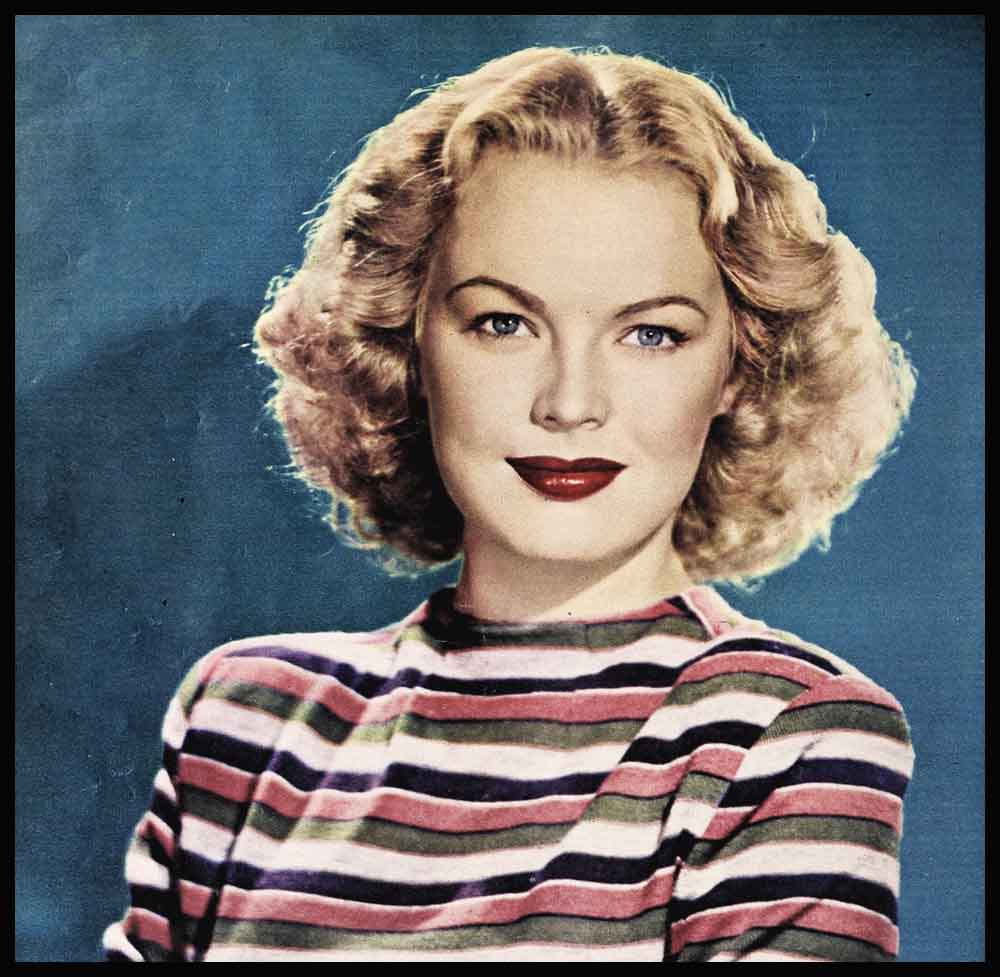 She’s ambitious—and angelic. She’s determined—and dimpled. She’s smart—and sex-appealing. She’s brainy—and beautiful. She has the capacity of a giant for work—and is a rather small girl of eighteen. She’s new—and news-making. She’s a blonde—and a business woman. She’s psychic—and sensational. She’s lucky—and lovable. She’s June Haver—the glittering hope of her studio and, if you’re in a romantic mood, the love of Seaman First-Class Farley Granger, about whom more anon.

June was practically born wanting to be an actress. Her mother was an actress and gave June the works in the way of singing, dancing, piano and acting training. Her stepfather, Bert Haver, was so determined that June should be a thespian that he personally toted her around the country for auditions.

“I can’t remember a time when I wasn’t performing before an audience,” the diminutive star says. “I gave a piano recital when I was five. At seven I auditioned for Metro talent scouts. At eleven I had my own radio program. At thirteen I was singing with big name bands. At fourteen I signed as a soloist with Ted Fio Rito’s orchestra. At fifteen I was making shorts at Universal. At sixteen I had a movie contract with Twentieth Century-Fox.” (All this without a trace of bragging from the candid blue-eyed blonde.)

In between whiles, June won just about every contest in America. In the Beverly Hills apartment where June lives with her mother, stepfather and younger sister, there are no less than fifty medals, cups, trophies and other prize-winning gadgets. You name it—June won it. She was lucky, but a fantastic amount of shrewd planning and building formed the groundwork for the soaring rise of the talented little charmer.

To give you an example of how June prepares for her opportunities: It happened to be the most important career moment of her life, but the same thoroughness goes for everything.

“For six months after I was signed by Fox,” explains June, “I did nothing except go to school on the lot with Roddy McDowall, Peggy Ann Garner and Jeanne Crain. I also worked at my singing, dancing and acting. Then I had a terrible shock. My agent told me that my option would not be taken up!

“I went to Lew Schreiber, the casting director, and said, ‘I hear you’re going to drop my option.’ ‘We have already dropped it,’ he told me. I practically went on my knees and begged for a chance to prove what I could do. ‘You’re so young,’ he gave as the reason for dropping me. ‘I’ve grown a lot in six months—a girl does, you know,’ I told him. I’ll show you I can play a grown-up woman.’ He said I could try.”

It was a few weeks before Christmas and June had planned a lot of present-buying on her seventy-five-dollar-a-week salary. She just had to be re-signed to buy those presents. June wrote her screen test, a vignette based on her own life that gave her opportunities for singing, dancing and acting. She bought a. two-hundred-dollar white dress from Adrian that glittered with rhinestones. The rhinestones were important in the plan. She bought silvered high-heeled shoes and a white-spangled veil. She borrowed her mother’s diamond ring and earrings. She was ready for her big moment—or nearly ready.

The cameraman in a screen test can make or mar the testee. The cameraman was Joe MacDonald, a nice guy. “Will you do me a favor,” June begged him. He said he would if he could. “I’d like to be the only thing in white on the screen, everything else to be in shadow.” Joe obliged and for a finishing, glamorous touch, he clouded the background with soft palm trees. Yes, June bought the Christmas presents and got a twenty-five dollar raise besides.

Her first opportunity to go to Hollywood came when as a child she won an M-G-M contest. But her mother said no.

In fact, it was a band that took her to Hollywood. When June was fourteen (that was in 1940) Ted Fio Rito came to town and booked her to go with the band to St. Louis for one week. “If you can wow ’em in St. Louis, everything else is easy,” he told her. And so when the Fio Rito band was booked for a month in Los Angeles at the Trianon, the Haver family heaved a collective sigh and said, “This is it,” and moved lock, stock and daughters to the cinema city.

“It was the right move,” says June. “All my life I had known I would eventually land in Hollywood. A Warners talent scout came to the Trianon and I was given a screen test.”

And once again, June proved that luck is ninety per cent hard work and “being prepared” and only ten per cent opportunity. For the test she had to play an adolescent in pigtails. She was dressed and ready to perform when the director told her the part for which she was testing had been cast. But there was another role she could try for—a sophisticated, mature young woman. Before you could say “pigtails,” hers were combed out, and the fair tresses piled atop of the fifteen-year-old head. She was padded up a bit, sailed into her scene, and Warner’s said okay, and handed her a contract.

“My first thought after I was signed was ‘Thank heavens, all the contests are over!’ ” says June, “but I soon discovered the real contest had only just begun.” After nine months and still no picture for her, she finally got permission to do the stage show, “Meet The People.”

June was excited because all the producers and directors would be at the first night and at last she’d have a real chance to prove herself in Hollywood. So three days before the opening she had laryngitis and lost her voice! The night before the premiere her voice came back, but at the dress rehearsal she sprained her ankle! She calmly told the doctor to tape it up, and proceeded to go on for the show. June danced for three weeks with a sprained foot and fainted several times off-stage.

By this time, June’s courage was known ali over the lot. Boss Darryl Zanuck decided it was time to hand out a real prize—the lead with Lon McCallister and Jeanne Crain in “Home In Indiana.” That was all June required to establish herself as star fodder. Since then she has starred in “Irish Eyes Are Smiling” and “Where Do We Go From Here” with Joan Leslie and Fred MacMurray. Next on her schedule is the lead with Betty Grable in “The Dolly Sisters,” and after that she may go to Warners to play Marilyn Miller.

When June is working, she is called for breakfast at six a.m. and is ready and made up in the studio at 8:45. She is in bed by nine-thirty or ten. On the few days a year that she is not wanted by her studio, she has fun redecorating her apartment. “I’ve just finished doing three shelves in the kitchen,” June says proudly. “One I decorated shocking pink and the others aqua and chartreuse. It looks like a little circus room, with it’s striped drapes!”

June loves to swim, and when the day comes to buy the house, there will be a swimming pool. Her pride and joy is the new car, which she recently bought, and she drives it whenever she has the gas.

But it isn’t ali swimming and driving for U June. And it isn’t all picture-making. She is interested in world affairs, and she reads everything she can get her hands on. And she is writing a novel. “It’s a lot about myself. A first book usually is,” she says. She hopes to sell the book to her studio—and to act in it. Add this to the fact that she also writes songs and you get a most amazing picture—the picture of a girl who does something about her wishful thinking, whether it’s her screen career, one of her many hobbies, or writing to the lad who has her heart, Farley Granger.

June and Farley literally met in the school room. It was Christmas 1943 and the youngsters working in “Home In Indiana” decided to throw a party in the school room. Granger was working on the same lot in “The Purple Heart.” A blanket invitation was sent to all the younger players in the studio. June and Farley discovered each other, then and there.

“The next day,” June says, “Farley called me for a date.” They had lunch. Their first really big date was for the premiere of “The Song Of Bernadette.” From then on they were a steady twosome. June was still going to school, so Farley decided to go to school too. At any rate, he kept appearing at the school room. To make his visits authentic, he took up a course in art. But all he could paint was June!

Like so many American youngsters in love, June and Farley hadn’t long together. Farley went off to the Naval Training Center at Farragut, Idaho. “But,” June says, “he kept sending me little gifts—to remind me he was in the Navy—and to remind me of him—cute little nautical things, and I love them. He wanted pin-up pictures of me for his locker, too.”

That last furlough in Hollywood—well, it was like what a lot of other kids are experiencing. A few days—and then an APO address. Farley went from there to the Pacific. June says, “We were together every possible moment. We saw a movie every night. On his stopover in San Francisco he wrote me he saw ‘Irish Eyes Are Smiling’ three times!” His Christmas gift to June was a little figure of a ballerina, the kind of a gift a boy in love would take a lot of time choosing. She loves it.

June and Farley talked about marriage before he left. “We almost eloped his last night in Hollywood,” she confesses. “But Farley is like me, very ambitious and determined to be a big star. So we decided it would be better for us both to wait until we were right on top. We know if our love is real, it will last and we can wait.”

June has always known what she wants and her romance is probably no exception. So it’s quite possible when the daily V-mail letters are replaced by Farley Granger in person, there’ll be a wedding.